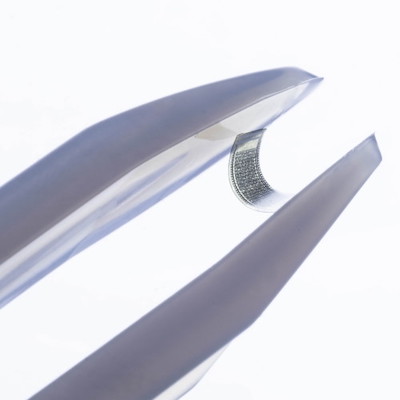 I don’t like to boast, but I was around to see the dawn of the microprocessor (cue Richard Strauss’s tone poem (orchestral music) Also Sprach Zarathustra (“Thus Spake Zarathustra”).

As an aside, and as I made mention in my blog — We’re One Step Closer to Judgment Day — this awe-inspiring piece (whose fanfare plays such an iconic role in 2001: A Space Odyssey) is named for the ancient Iranian prophet, Zarathustra, who also went by the moniker Zoroaster, under which name he founded the religion of Zoroastrianism, which one of the world’s oldest continuously-practiced organized faiths (wow, this was a long sentence, so please excuse me while I gasp for breath).

Have you heard the phrase “nostalgia isn’t what it used to be”? (Although this saying is often attributed to quotemaster Yogi Berra, the earliest incarnation is to be found in the 1959 novel The Tents of Wickedness by Peter De Vries.) Well, this expression is wrong. Nostalgia is alive and well. If you need proof, just mention the names of any of the early microprocesses to those stalwarts amongst us of a certain age and watch the expressions of rapture and wonderment light up their (our) faces.

For many of us, the microprocessor revolution kicked off with the Intel 4004 — which was composed of only 2,300 transistors and which could execute only 60,000 operations per second — although my friend Steve Leibson is fond of posing the question: Will We Ever Really Know Who Invented the Microprocessor? Having said this, if you want to learn more about the introduction and evolution of the 4004, you can’t do better than Steve’s Say Happy 50th Birthday to the Microprocessor columns, Part 1 and Part 2.

As I wrote in The First Microprocessors article on my DIY Calculator website: “In November 1972, Intel introduced the 8008, which was essentially an 8-bit version of the 4004. The 8008 contained approximately 3,300 transistors and was the first microprocessor to be supported by a high-level language compiler called PL/M. The 8008 was followed by the 4040, which extended the 4004’s capabilities by adding logical and compare instructions and by supporting subroutine nesting using a small internal stack. However, the 4004, 4040, and 8008 were all designed for specific applications, and it was not until April 1974 that Intel presented the first true general-purpose microprocessor, the 8080. This 8-bit device, which contained around 4,500 transistors and could perform 200,000 operations per second, was destined for fame as the central processor of many of the early home computers. Following the 8080, the microprocessor field exploded with devices such as the 6800 from Motorola in August 1974, the 6502 from MOS Technology in 1975, and the Z80 from Zilog in 1976 (to name but a few).”

All of these microprocessors have a claim to fame, not least in the personal computers in which they found themselves. The 8080 appeared in the heart of the legendary Altair 8800, the 6800 featured in the Sphere 1, the Z80 made its presence felt in the TRS-80, and the 6502 popped up all over the place in such masterpieces as the Kim-1, the Commodore PET, and the Apple I and II, to name but a few.

In particular, the 6502 (with ~4,500 transistors and a 1 to 2 MHz clock speed) holds a soft spot for many of us because it cost only $25 when it was introduced, which was a fraction of the price of other processors available at that time. This affordability helped promulgate the 6502 and flung open the doors to myriad microprocessor-based applications.

The funny thing about the 6502 is that — much like the Energizer Bunny — it keeps on going and going and going. It also manages to keep on appearing in unexpected ways. For example, my chum — the aptly named Nick Bild — designed and built a programmable 6502 CPU-based breadboard computer called the Vectron 64. 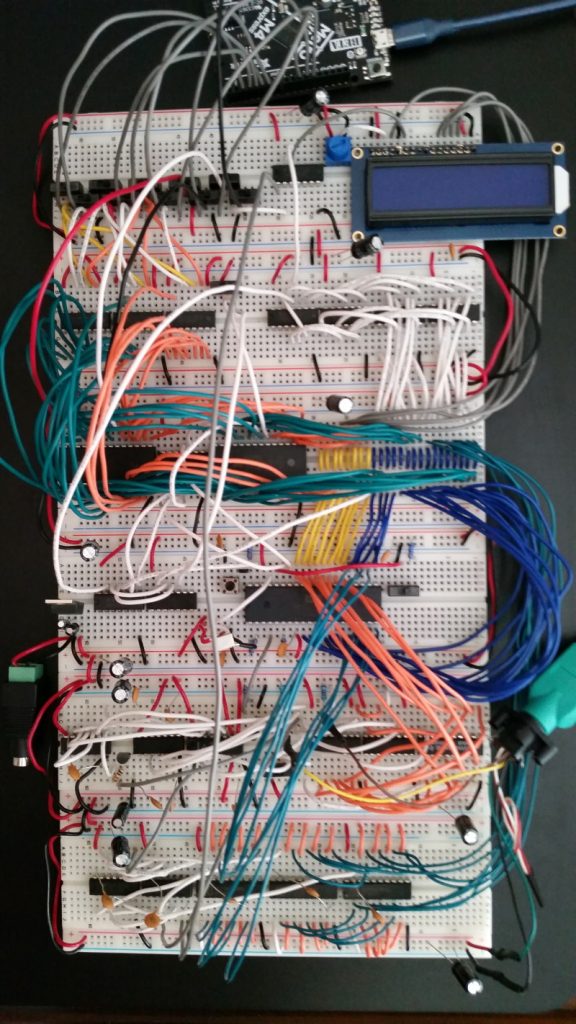 In addition to the 6502, this bodacious beauty boasts 32K of RAM and 32K of ROM, along with a PS/2 keyboard and an LCD display for input and output (all of the files associated with this project are available on GitHub at http://bit.ly/34pf4g2).

Not content with what most of us would consider to be a triumph, Nick next decided to add virtual reality (VR) capability to this little rascal. 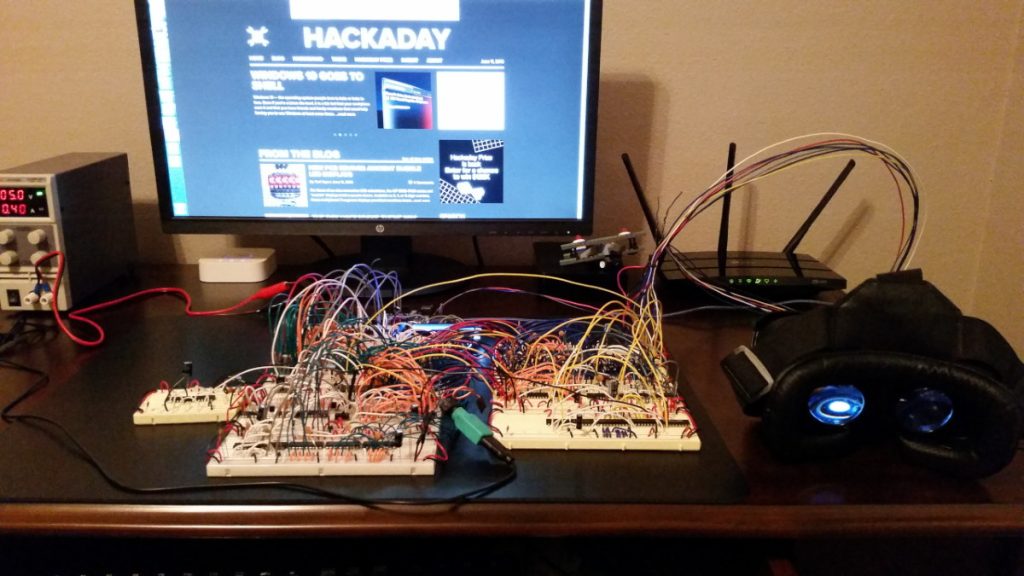 With a lot of effort, some hardware tricks, and some very tight assembly code, Nick was able to use his masterpiece to drive two 320 x 240 LCD screens mounted in a VR headset, offsetting his sprites by a few pixels between the two screens to create stereoscopic 3D visual effects. Just to add a big dollop of cream on top of the metaphorical cake, Nick then wrote a 3D game called Asteroids VR to demonstrate the system (once again, all of the files associated with this project are available on GitHub at http://bit.ly/2pBCbVY).

Even today, derivatives of the 6502 and its family members are utilized in the automotive, consumer, industrial, and medical markets. For example, the folks at Western Design Center (WDC) supply a CMOS 65xx family of microprocessors (MPUs), microcontrollers (MCUs), and microperipheral devices for use in new designs as well as replacements for obsolete chips (FPGA-based versions are also available).

Do you recall my column on PragmatIC from the tail-end of 2020 (see Ultra-Low-Cost Flexible ICs Make Possible Trillions of Smart Objects)? In a crunchy nutshell, as I wrote in that column, the gist of PragmatIC’s flexible electronics technology can be summarized as follows: “As opposed to a wafer formed from an expensive slice of silicon, they start with an inexpensive glass wafer that’s less than 1 mm thick and 200 mm (approximately 8 inches) in diameter. They then deposit a thin film of polyimide onto the wafer, where polyimide is a polymer of imide monomers belonging to the class of high-performance, heat-resistant plastics. Next, they build the electronics — transistors, logic gates, multiple layers of metallization — on top of the polyimide using a thin film transistor (TFT) process that has been developed from the ground up to target the unique challenges of flexible integrated circuits. Finally, they peel the flexible polyimide sheet containing thousands of flexible ICs (FlexICs) off the top of the wafer. These FlexICs are thinner than a human hair and can be deployed in things like labels that can be attached to just about anything. Meanwhile, the glass wafer can be used over and over again.”

This technology really is pretty cool. At one time I was chatting with the guys and gals at PragmatIC about the idea of them using the 4-bit HRRG microprocessor defined and designed by yours truly and my chum Joe Farr (where HRRG stands for Heath Robinson-Rube Goldberg, which may give you some idea as to the nature of the beast). However, they eventually opted to go another way. Can you guess which processor they fell for? Yes! You got it! (How did you know?) We are, of course, talking about none other than the illustrious 6502.

Earlier this year at the 2022 International Solid-State Circuits Conference (2022 ISSCC), which was held virtually February 20-28, representatives from imec (a world-leading research and innovation hub in nanoelectronics and digital technologies), KU Leuven (an international community where innovative research forms the basis of all its academic programs), and PragmatIC (a world leader in flexible electronics) presented the world’s fastest 8-bit 6502 microprocessor implemented in 0.8µm metal-oxide flexible technology capable of running real-time complex assembly code. 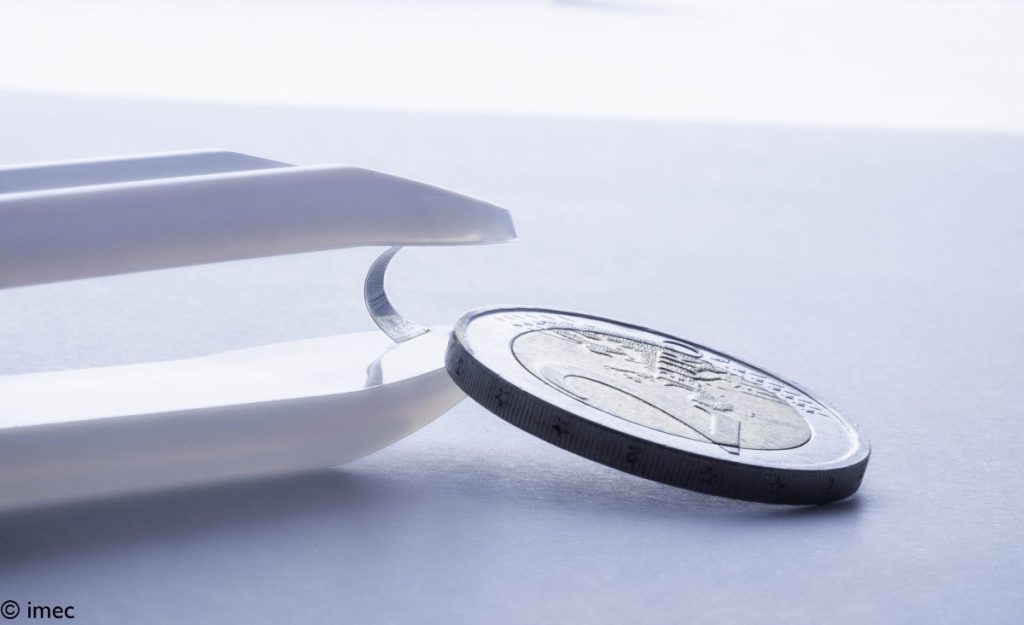 Say hello to this flexible incarnation of the venerable 6502 microprocessor (Image source: imec)

As fate would have it, I was just chatting with Kris Myny and Hikmet Çeliker. Kris is a principal scientist at imec and a professor at KU Leuven, while Hikmet is a PhD researcher in the thin-film electronics group at imec. These are the brainiac boffins who are largely responsible for the realization of the Flex6502.

As Kris and Hikmet told me, flexible electronics based on thin-film transistor technology is preferred over Si CMOS-based electronics for applications requiring low-cost, thin, flexible, and/or conformable devices. This technology has already made inroads in things like health-patch sensors and RFID labels, and as a driver for flat panel displays. Until now, the missing piece in the puzzle has been a flexible microprocessor capable of performing more complex signal processing calculations, thereby providing the ability to add compute functionality to a broad range of IoT applications.

In the case of the Flex6502, Kris and Hikmet started with an open-source version of the 8-bit 6502, and then set out to create this little ragamuffin using 0.8µm indium-gallium-zinc-oxide (IGZO)-transistor technology. They began by engineering a collection of logic gates designed to obtain the best results in terms of area, power, and speed.

One thing I was wondering about was how they managed to build the logic gates, since I know metal-oxide thin-film transistors based on IGZO are inherently n-type, and logic gates implemented in NMOS have a significantly higher static power consumption than do those implemented in CMOS, which uses NMOS and PMOS transistors connected in a complementary fashion (hence the ‘C’ in CMOS). It turns out they are employing a concept called Pseudo-CMOS, which can be implemented using only NMOS transistors.

Now my head is full of all sorts of ideas for potential Flex6502-based applications. Quite apart from anything else, I’m delighted to see the 6502 continuing to rock long into the 21st century. When this processor first hit the scene in 1975, I wonder what its creators would have thought if you’d told them we would be talking about a flexible incarnation of their design 47 years into their future. What say you? Do you have fond memories of the 6502 or any of the other foundational CPUs referenced in this column?