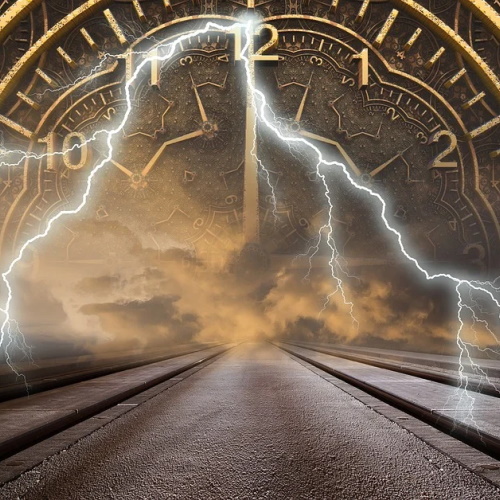 I simply don’t know where the time goes. It seems like yonks since I wrote Part 1 and Part 2 of this soon to be famous (or forgotten) mega-mini-series. Speaking of yonks (which essentially means “a long time” but can also mean “a longer time than expected”) reminds me of the fact that we use three tenses in the English language: past, present, and future. For example: Bob ate my bacon sandwich (past), I am not happy (present), Bob will surely suffer for his transgression (future).

“Well, duh!” I can hear you saying to yourself, but you shouldn’t be too hasty. As you may recall from previous columns, one of my background hobby projects is writing a book called Wroting Inglish: The Essential Guide to Writing English for Anyone Who Doesn’t Want to be Thought a Dingbat (see also Good-For-Nothing Grammarians and Bodaciously Big Brass Balls).

The funny thing is that we tend to assume that whatever we grew up with is the right (and only) way to do things. As I mention in Wroting Inglish, for example, “Different languages grammaticalize tense in different ways. Some languages employ only two tenses to express past and non-past, where non-past covers both present and future. By comparison, other two-tense languages express only future and non-future. Some languages don’t have any tenses at all (I find it hard to wrap my brain around this myself), while some use four or more tenses to express finer temporal distinctions. The Aboriginal Australian six-tense language Kalaw Lagaw Ya, for example, distinguishes between the remote past, the recent past, the today past, the present, the today/near future and the remote future.”

Speaking of tenses reminds me of the classic sketch in The Big Bang Theory where Sheldon starts to ponder the use of tenses when it comes to time travel.

I love the comments associated with this video snippet, such as the one that says, “I’m really struggling to not think about the mess the translators of this show in other languages could have created when translating this scene.”

Meanwhile, speaking of time travel reminds me that I recently saw a very funny movie called Frequently Asked Questions About Time Travel. Made in 2009, this film largely takes place in a pub that has a “time leak” in the men’s restroom. I don’t want to give anything away, but it’s safe to say that the story touches on most of the common time travel-related tropes. Although they are not related, this reminds me of the Three Flavors Cornetto film trilogy (so named because of the repeated passing references to Cornetto ice cream cones): Shaun of the Dead (2004), Hot Fuzz (2007), and The World’s End (2013).

I’m also reminded of two more films that stand proud in the crowd as far as I’m concerned: Millennium, which is based on the 1977 short story “Air Raid” by John Varley, and Time Bandits, which was co-written, produced, and directed by Terry Gilliam of Monty Python fame.

Since we find ourselves talking about time travel, I personally think one of the best stories ever was The End of Eternity by Isaac Asimov. Two other favorites, both short stories, are By His Bootstraps by Robert Heinlein and A Sound of Thunder by Ray Bradbury.

I also really liked Eon by Greg Bear. This isn’t a classical time travel tale, involving as it does a giant 300-kilometer-long asteroid that is detected heading towards Earth and that subsequently deaccelerates and starts to orbit the Earth. One thing that makes this a time travel story is that the oddly shaped asteroid is identical to one that is currently orbiting Jupiter (or maybe it’s in the asteroid belt – I can’t remember – I need to read this book again), which means it must have come from our future. When we go to visit the incarnation orbiting the Earth, we discover that it’s been hollowed out along its long axis, subdivided into seven cylindrical chambers that have been terraformed. The revelations as we go from chamber to chamber are so mind-blowing that I had to take breaks between chambers while reading. (Although completely unrelated, another “must read” by Greg Bear is Blood Music.)

In some ways, the asteroid in Eon turns out to be a sort of generation starship. Very often, these stories involve some sort of disaster leaving the inhabitants of the ship unaware that they are actually living in a spaceship. Two of my favorite tales of this ilk are Orphans of the Sky by Robert Heinlein and Non-Stop by Brian Aldiss. A surprise entry (at least for me) came from Harry Harrison. I originally knew Harry from his Stainless Steel Rat series. I also loved his satirical Bill the Galactic Hero. So, while I was visiting the library when I was around 14 years old, when I saw Captive Universe, I snatched it up. You can only imagine my disbelief, despondency, and dismay when I returned home and opened the book, only to find myself reading about a young Aztec tribesman living in an isolated valley that was sealed off from the rest of the world in ages past by a massive earthquake. At first, I feared I was reading historical fiction, but I persevered, and it wasn’t long before I was enthralled in one of the best generation starship stories ever!

I’m sure you’ve read the epic science fiction novel Dune by Frank Herbert. The book itself is a triumph of world-building. Unfortunately, early film and TV treatments failed to satisfy. Happily, the Dune movie released in 2021 was awesome (see also my DUNE 2021: First Impressions review) and I can’t wait for Part 2, which is scheduled to come out in November 2023. Unfortunately, many people know Frank only for Dune and its sequels and prequels, but he wrote a bunch of stuff. One of my favorites—not least that it’s one of the few science fiction books to feature cheese (I like cheese)—is The Santaroga Barrier, which is a book that will long leave you cogitating and ruminating on the concept of a group mind operating at a subconscious level.

I currently have so many other book titles bouncing around my poor old noggin that they are making my head hurt. One problem is that every time I mention a book or film here, it makes me want to read or watch it again. Another problem is that we’ve only scraped the surface of all the cool books I want to tell you about. As a result, I fear there are many more parts to this mega-mini-series to come. In the meantime, if you are familiar with any of the books or films I’ve mentioned here, I’d love to hear your thoughts on them. Are there any that are new to you that you are tempted to try, and are there any classics you think I’ve missed? As always, I await your comments, questions, and suggestions in dread antici…