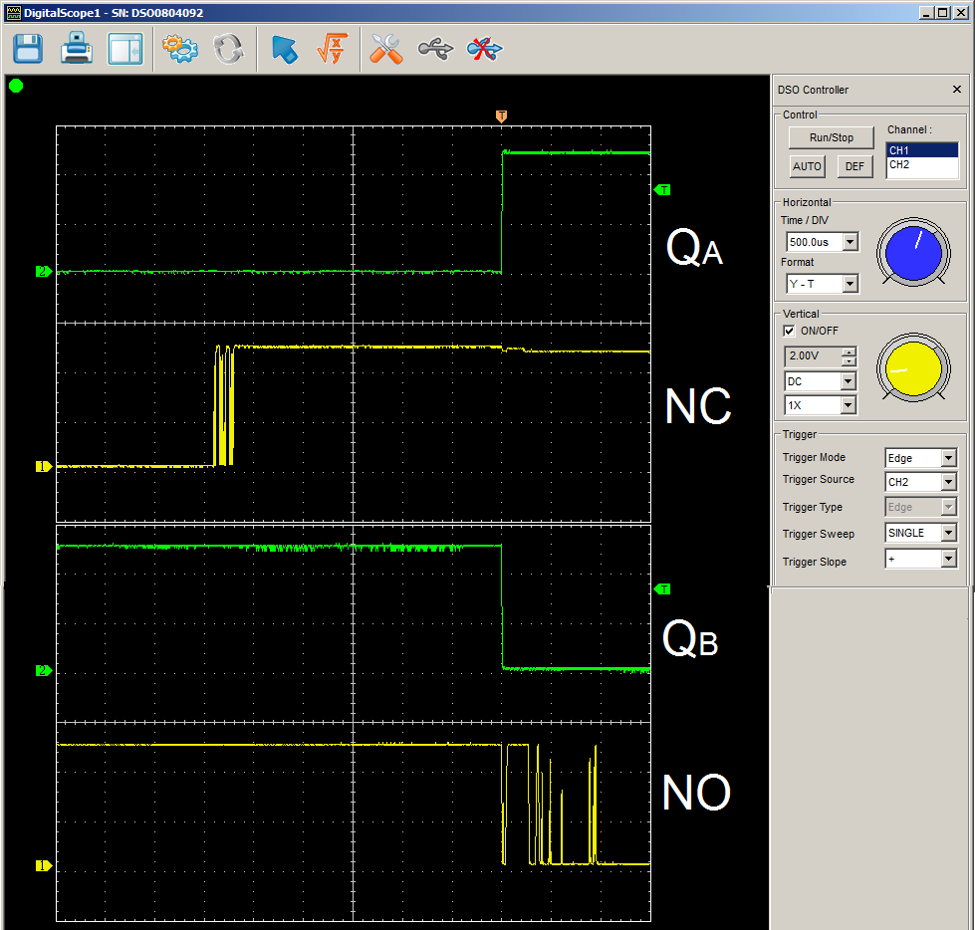 In Part 1 of this miniseries, we introduced the concept of switch bounce; that is, when we open (deactivate) or close (activate) a switch, it may make multiple transitions before eventually settling in its new state (see also my Switch Types and Switch Terminology columns). We also noted that this occurs in toggle switches, rocker switches, pushbutton switches, and so-forth — pretty much everything apart from the switches most of us never use anyway, like mercury tilt switches, for example.

In Part 2, we took a deeper dive into the bouncing associated with single pole, single throw (SPST) and single pole, double throw (SPDT) toggle switches, including some empirical data as to how long switch bounce might persist, how wide the individual bounce pulses might be, and how many bounces we might expect to see. Also, we introduced the point that whatever technique we use to address switch bounce – pre-processing the signal in hardware or post-processing it in software – it’s important that the technique is not fooled by the occasional noise “glitch” or “spike” caused by crosstalk, EMI, (electromagnetic interference), RFI (radio frequency interference), or ESD (electrostatic discharge). 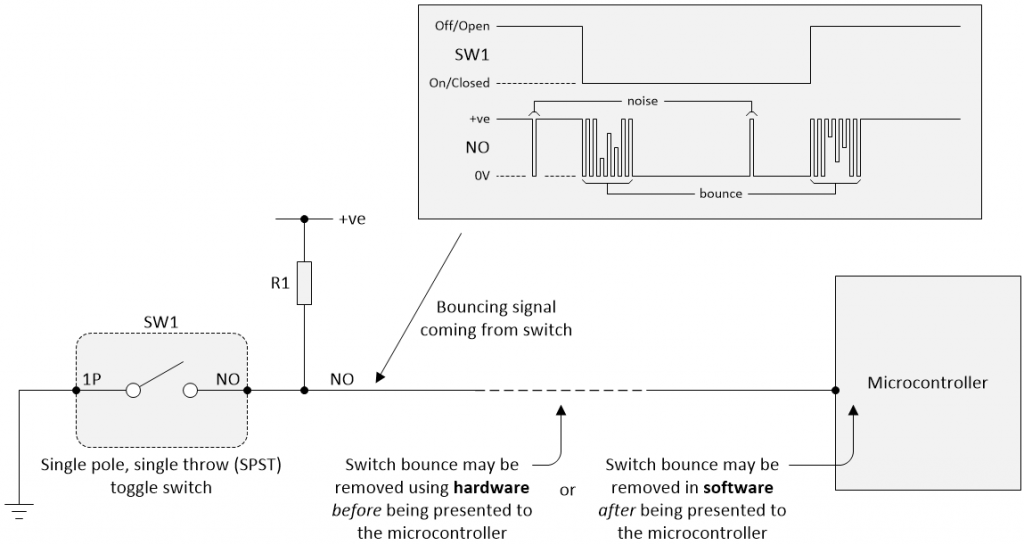 The switch bounce solution must not be fooled by noise (Image source: Max Maxfield)

Now, in Part 3, we have arrived at the point where the “rubber meets the road,” metaphorically speaking. This is where we start to consider various solutions to our bouncing switches.

Hardware vs. Software (A Bit of History)

When microprocessors first came on the scene circa the early- and mid-1970s, there were relatively large numbers of electronics hardware design engineers around, but relatively few software developers, and most of the guys and gals who did know software worked on the “big iron” mainframe computers or on minicomputers.

Microprocessors at that time were limited in terms of memory and clock cycles (i.e., they had relatively low clock frequencies, so every clock cycle was treasured). A lot of programming was painstakingly performed using assembly language, and — just to increase the fun and frivolity — a lot of the code was created by the hardware design engineers who typically were not conversant with programming in general and with good programming practices in particular.

All of the above goes to explain why many of the early solutions to the switch bounce problem were hardware-based — but wait, there’s more…

The 74xx series of transistor-transistor logic (TTL) integrated circuits from Texas Instruments (TI) first appeared in the scene in the mid-1960s. By the 1970s, printed circuit boards (PCBs) populated by these devices — and similar families from other vendors — were ubiquitous.

Each 74xx device typically contained a handful of jellybean logic gates or functions. For example, the 7400 contained four 2-input NAND gates; the 7474 contained two positive-edge triggered D-type flip-flops, each with its own asynchronous preset and clear; and the 74118 contained six SR latches.

The point is that a PCB could contain hundreds of these 74xx devices and, almost invariably, there were functions left unused — a NAND gate here, an SR latch there, perhaps even a D-type flip-flop that was unaccounted for.

Hardware design engineers saw these uncommitted logic functions as being “fair game” for use in debouncing their switches. One slight “fly in the soup,” as it were, is that it wasn’t uncommon to end up with each switch being debounced using a different technique depending on who was doing the designing and which left-over logic gates and functions were available.

For all of these reasons, it became increasingly common to address switch debounce in the software. The only teensy-weensy problem here is that the majority of software developers were totally unaware that switches bounced — at least, they were until their systems didn’t work when required, worked when not required, or worked intermittently, at which point they asked the hardware engineers what was going on and started a steep learning curve.

Some of the solutions created by software developers are ludicrously simplistic, while others are eye-wateringly convoluted and complex (which doesn’t mean they work as well as one might hope), but we’ll get to them in a while. First, let’s cogitate and ruminate over the hardware side of things…

The simplest hardware debounce solution is based on the use of a resistor-capacitor (RC) network. The RC time constant of the RC network, also called tau (τ), is measured in seconds and is equal to the product of the resistance (in ohms) and the capacitance (in farads). 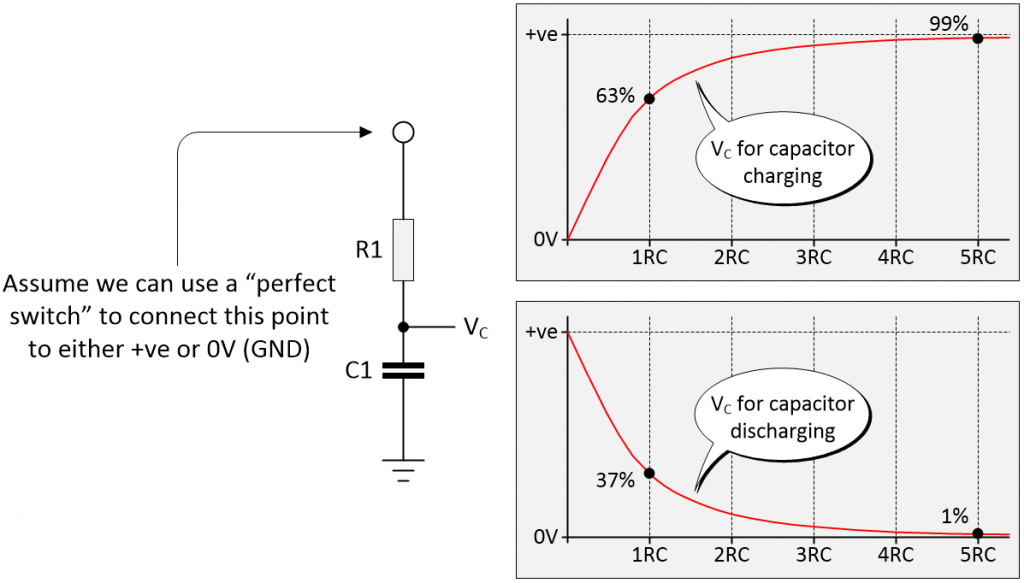 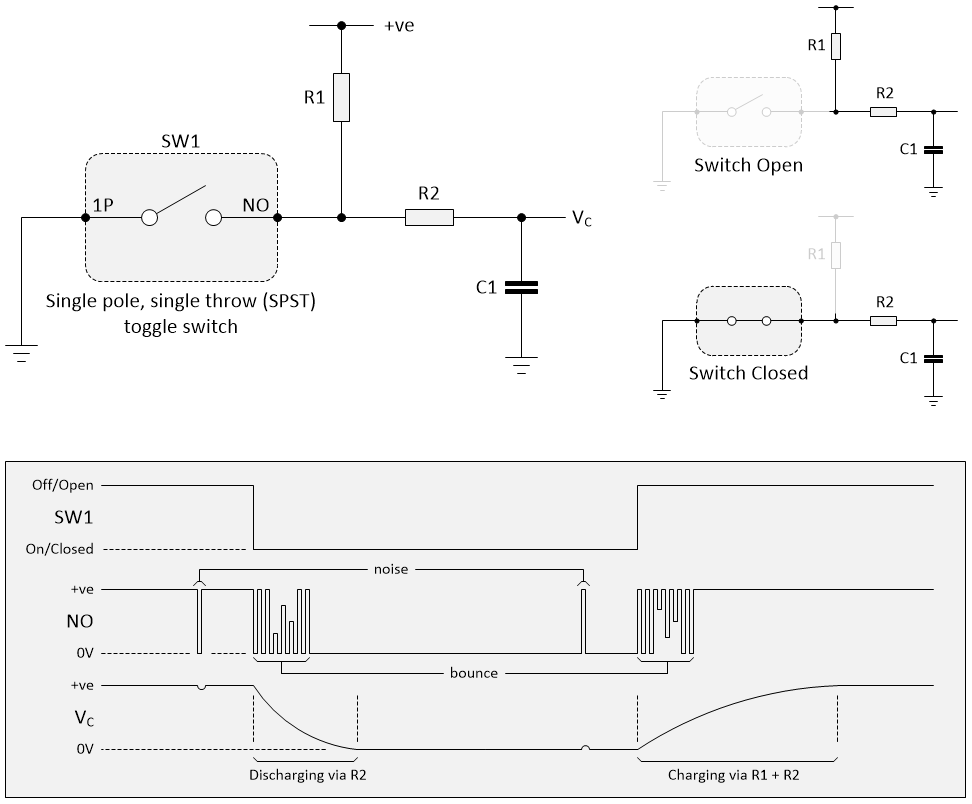 What’s the best way to select these values? Well, in this case I’m going to take the weasel way out and defer to the “Doing the Math” portion of Jack Ganssle’s Paper (may I remind you of the old saying that “Eagles may soar, but weasels rarely get sucked into jet engines”).

One of the problems with the solution shown above is that the charging time when the switch is opened (deactivated) is longer than the discharging time when the switch is closed (activated). This may not be a problem for many applications in which the switch’s activation is considered to be the important part of the process, but if it is required to shorten the deactivation time, then this can be achieved by adding a diode as illustrated below. 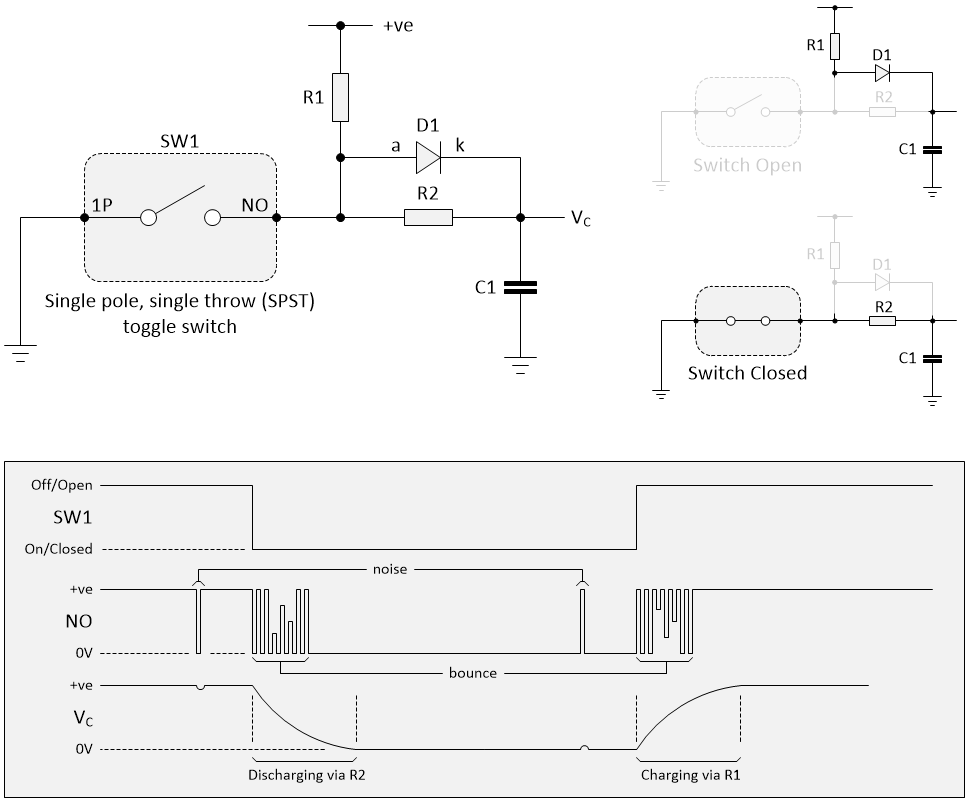 Purely for the sake of discussion, let’s assume our +ve value is 5V. Let’s also assume that we are starting off with our switch open and the capacitor charged to 5V. This means that when we close the switch, the diode’s cathode (k) is at 5V, while its anode (a) is at 0V. This means the diode is reverse biased, which means it won’t conduct, which means it’s like not having it there in the first place. Once again, the capacitor discharges through resistor R2.

By comparison, when we eventually open the switch again (after the capacitor has been discharged), then the diode’s cathode will be at the capacitor’s 0V and the diode will be forward biased from the 5V supply coming through R1. So long as the difference in potential stays above the diode’s forward voltage drop, the diode will conduct and will appear to be a short circuit, as if it were replaced by a piece of wire. Since we have effectively shorted out R2, it’s as if this resistor were removed from the circuit, so the capacitor charges only through resistor R1.

In the case of a small silicon diode operating at its rated currents, its forward voltage drop is about 0.6 to 0.7 volts (the value is different for other diode types; Schottky diodes can be rated as low as 0.2 V, while germanium diodes are in the 0.25 to 0.3 V range). Thus, assuming a small silicon diode with a forward voltage drop of 0.7 V, the only time R2 will come into play will be when the capacitor is close to the end of its charging cycle when its voltage reaches 4.3 V, which is long after the point when we will have registered the switch as having opened.

When it comes to a microcontroller-based system, these values also vary depending on the microcontroller (MCU) in question. In the case of the Atmel (now Microchip Technology) ATMega328 MCU, which is used in the Arduino Uno, for example, any value presented to a digital input that’s below 1.5 V or above 3.0 V will be considered to be a logic 0 or logic 1, respectively.

The point of all this is that digital functions in general, and microcontrollers in particular, don’t like to see input signals wandering around in the undefined region between a “good” logic 0 and a “good” logic 1. This is unfortunate, because the gradual rise or fall of the signal coming out of the RC network spends a lot of time (relatively speaking) in this “forbidden zone.”

Fortunately, way back in 1934, a young graduate student called Otto Herbert Schmitt invented something we now know as a Schmitt trigger (this invention was a result of Otto’s study into the propagation of neural impulses in the nerves of squids). The best way to describe this is by means of a figure as illustrated below.

A standard buffer has only a single switching threshold, which means that a noisy signal — including a signal with a bit of ripple on it — can result in multiple transitions at the output. By comparison, a Schmitt trigger buffer — that is, a buffer with a Schmitt trigger input — has two thresholds. The output changes only when the input crosses the upper threshold or the lower threshold. This dual threshold action is called hysteresis (the dependence of the state of a system on its history), which implies that the trigger possesses memory.

In the case of the RC network that we’re using as a simple SPST switch debounce circuit, we would add a Schmitt trigger buffer between the RC network and the microcontroller as illustrated below. 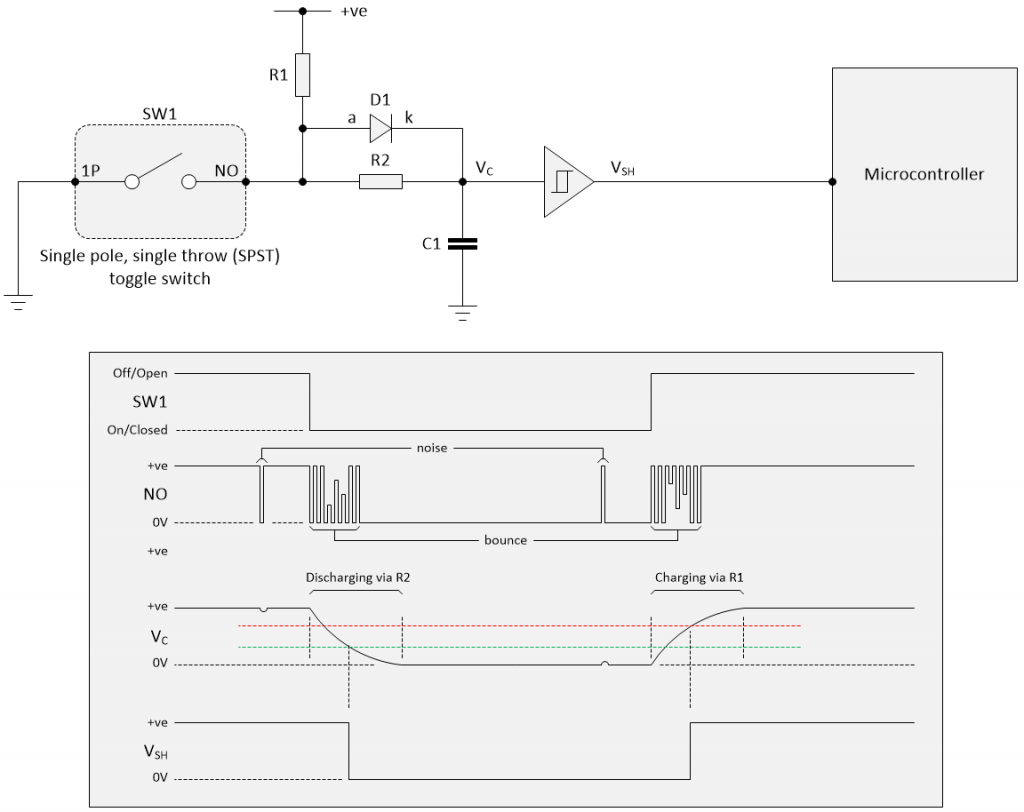 If we did use an inverting buffer, then we’d have to “swap things over” in the software. That is, instead of regarding a logic 0 as representing the switch closing, we would now regard a logic 1 as indicating this switch state, and vice versa.

Call Me Pedantic If You Will

I fear I’ve gone a little overboard with my description of the RC debounce circuit, not the least that we have so many other hardware debounce techniques available to us. However, the purpose of these columns is to answer everyone’s niggling questions. As part of this, I want to explain the hardware side of things in such a way that software folks can understand what’s going on, and — when we eventually get to any software solutions, explain those in such a way that folks on the hardware side of the fence can understand what we’re waffling on about.

I also remember what it was like when I was starting out. People would throw things into the conversation (or written descriptions) without explanation, scattering terms like “reverse bias” and “forward voltage drop” and “Schmitt trigger” like confetti, assuming that I had a clue what they were talking about. Sad to relate, this was often an unwarranted assumption.

What do you think? Do you like the way I’m covering things, or would you like me to pick up the pace?