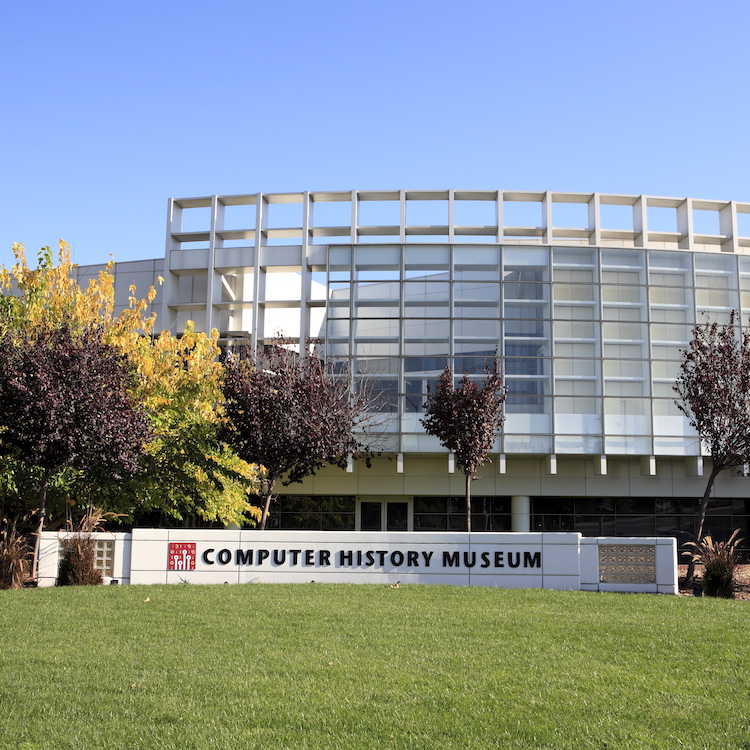 September 11, a Day to Remember, Was Also a Day to Celebrate Some Silicon Valley Milestones
by Steven Leibson

September 11 is a somber day of remembrance in the United States for the terrible events that took place 20 years ago, but, this year, it was also a happy day to quietly remember ten significant Silicon Valley Milestones. Brian Berg organized an outdoor event at the Computer History Museum in Mountain View, California to commemorate eleven IEEE Milestones that he helped to create.

The IEEE approves Milestones for technical accomplishments that are at least 25 years old. These Milestones recognize accomplishments in the fields of electrical engineering and computer science, and they include many significant events and achievements, such as Benjamin Franklin’s experiments with electricity in the mid-18th century, Marconi’s experiments in wireless telegraphy, the invention of the transistor, development of the Compact Disc, and the first stereophonic recording – which occurred at London’s Abbey Road Studios in 1931, long before the Beatles recorded there.

The speakers at the September 11 event gave speeches, shared memories, and told some whoppers. The eleven IEEE Milestones are commemorated with bronze plaques mounted to the brick wall in the museum’s courtyard.

Here’s a summary of the Milestones:

Shakey the robot was an ARPA-funded project that broke ground in numerous areas, including robotics, AI and computer vision. The newly founded Artificial Intelligence Center at SRI International (originally the Stanford Research Institute) proposed a “mobile automaton for reconnaissance” project to ARPA in the mid-1960s. That may seem like an odd term, but it helped ensure the project’s approval. ARPA wasn’t funding autonomous military robots back then; it would have seemed too much like science fiction. Shakey was the first mobile robot with the ability to perceive and reason about its surroundings. The project lasted from 1966 to 1972.

Back then, you could not fit a computer into a mobile platform, so Shakey’s “brain” was a room-sized computer, which was linked to the robot by radio. Shakey could analyze commands and break them down into basic chunks by itself. The project combined research in robotics, computer vision, and natural language processing. Shakey the robot greatly influenced modern robotics and AI techniques.

Shakey’s foundational algorithms – including the A* search algorithm, the Hough transform for feature extraction, and graph traversal – are still used today. They compute your driving directions, determine the paths of video game characters, and even choose the routes for autonomous Mars rovers. They also serve as the foundation for the lane-keeping technology now used in millions of automobiles.  Shakey has been called the Great Grandfather of self-driving cars and military drones.

Although Shakey’s roaming days are long past, SRI continued to develop autonomous robots – including Flakey and UCAV – long after Shakey retired. Meanwhile, you can still see Shakey, the groundbreaking, pathfinding robot, on exhibit at the Computer History Museum. In addition, SRI created a 24-minute film called “SHAKEY: Experimentation in Robot Learning and Planning.”

Silicon Valley is founded on demos. You want venture capital for your startup? You need a pitch, preferably with a demo. The most famous demo ever made, often called “The Mother of All Demos,” took place in San Francisco on Dec. 9, 1968.  Doug Engelbart’s famous demo showcased many computer technologies that have become commonplace today, including hypertext, video conferencing, and – perhaps most memorably – the mouse.  Like Shakey, Engelbart’s Demo was an SRI project.

While working at Hughes Electronics during the 1970s, Eli Harari found that thin silicon-dioxide films (that’s thin as in about 100 angstroms) supported Fowler-Nordheim tunneling at reasonable voltage levels and could be used as a data-storage mechanism. This discovery led to the development of the EEPROM in 1976 and is the fundamental storage mechanism for Flash memory. Harari founded Flash memory vendor SanDisk in 1988. Flash memory sales had grown to $56 billion by 2020.

In the early 1980s, UC Berkeley Professor Dave Patterson successfully proved the merits of a streamlined processor architecture called RISC, for Reduced Instruction Set Computing. His work was controversial, to say the least. During that time, Sun Microsystems’ workstations were riding the successive generations of 68000 CISC microprocessors from Motorola Semiconductor, but Sun decided to change horses before the 68000 architecture gave out. Sun embraced Patterson’s ideas, hired him as a consultant, and developed the first SPARC processor.

Uday Kapoor managed the team that designed SPARC, which was the first commercial success for the RISC approach. Today, even CISC processors are RISC processors under the hood, but the SPARC processor was RISC’s first big commercial breakthrough success.

If you’re reading this article, there’s a 99.9999999 percent chance you’ve heard of Moore’s Law. Gordon Moore published a very short article in 1965 that predicted an exponential increase in the number of components that would fit on one silicon die. The semiconductor industry took this prediction at face value and managed to pull the same rabbit out of the same hat for 50 years, transforming Moore’s prediction into Moore’s Law. Gordon Moore is now 92. He does not travel much and could not attend this Milestone event, so Ted Hoff, one of the architects of the Intel 4004 microprocessor, spoke in his stead. The Intel 4004 microprocessor is a child of Moore’s Law. (For a more in-depth look at the origins of Moore’s Law, see “Moore’s Law and the Seven Devices.”)

It’s gone now, but a humble, single-story building at the corner of San Antonio Road and California Avenue was the birthplace of Silicon Valley. William Shockley and his team won the Nobel Prize in Physics in 1956 for the invention of the transistor. Shockley had already decided to build a company around his invention. In 1955, he moved back to his birthplace in California, an agricultural area known as the “Valley of Heart’s Delight,” and set up shop at 391 San Antonio Road amid the apricot orchards in Mountain View, the same town where the Computer History Museum is now located. I visited this historic building shortly before it was demolished. It was a fruit market. Humble is precisely the right word for such a landmark.

Shockley Semiconductor Laboratory was located at 391 San Antonio Road. Federico Faggin, the man largely responsible for designing the Intel 4004 microprocessor, Zilog’s founder, and designer of the world’s most elegant 8-bit microprocessor – the Z80 – spoke about Silicon Valley’s birthplace during the event. This year, Faggin published a book about his personal journey through the dual lenses of Moore’s Law and around Silicon Valley. His book is titled Silicon: From the Invention of the Microprocessor to the New Science of Consciousness. Appropriately, it’s available from Amazon in paper, audio, and Kindle formats.

(For more information about the birthplace of Silicon Valley, see “391 San Antonio Road: The House that William Shockley Built (and Destroyed)”.) 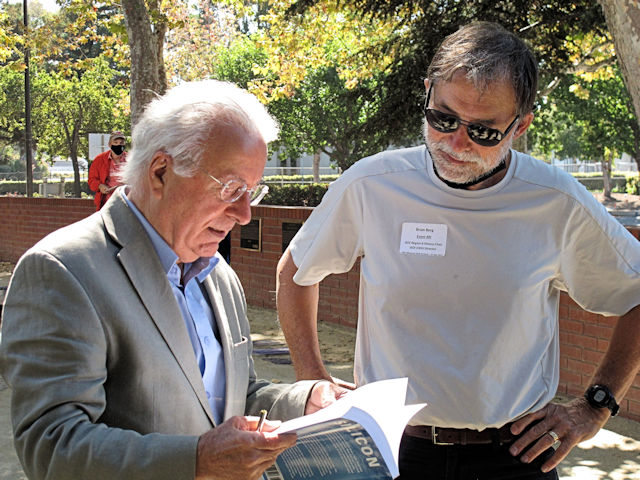 Federico Faggin and Brian Berg peruse Faggin’s new book, Silicon: From the Invention of the Microprocessor to the New Science of Consciousness, at the September 11 IEEE Milestones event, held at the Computer History Museum in Mountain View, California.

There’s no denying Apple’s place in the development of the personal computer. The Apple I was nothing more than a loaded circuit board. If you were a hobbyist in 1976 or 1977, you could purchase that board for $666.66 (Steve Jobs had a wry sense of humor) and you could then get a keyboard, build an enclosure, and attach a video monitor or TV set to the machine. Apple announced the more complete, consumer-ready product, the Apple II, on June 10, 1977 and discontinued the Apple I a few months later.

The Apple II unleashed the personal computer revolution, in a way that the other big sellers of the day (the Tandy TRS-80 and the Commodore Pet) did not. The Apple I and Apple II computers were incarnations of Steve Wozniak’s technical design brilliance and dedication to elegant simplicity. Seven years later, Apple introduced the Macintosh, which featured many of the graphical computing ideas first shown by Doug Engelbart in “The Mother of All Demos.”

Today, whether you have a Macintosh or not, you work in the manner popularized by that machine. The IEEE has approved three Milestones, one for each of these three groundbreaking Apple computers. The three plaques will be mounted on the Computer History Museum’s courtyard wall at a later date, during a separate ceremony.

Long before there was Google, long before the Web, long before the Internet, there was DIALOG. The DIALOG search algorithms were the subject of Roger Summit’s PhD thesis at Stanford University. He productized DIALOG as a powerful search tool at Lockheed, and then managed it after Lockheed spun DIALOG off as a separate company. It’s still in active use today.

From the outset, DIALOG had the ability to perform iterative refinement of its search results, something not easily done in today’s free, online search engines. DIALOG met and continues to meet the needs of a select set of customers, including pharmaceutical companies that are searching for new drugs, the US Patent Office’s searches for prior art, and many entities that need to search through highly vetted technical studies and documents not found on the web.

SPICE, the EDA Tool that Keeps on Giving

SPICE (“Simulation Program with Integrated Circuit Emphasis”) originated from a graduate class project at UC Berkeley during the 1969-1970 school year. If the project succeeded, the entire class would get an “A.” If it did not succeed, the entire class would fail. That announcement at the beginning of the first days of class cleared half the classroom as students rushed out of the room to drop the class. Larry Nagel was one of the students who didn’t leave. The class got an “A” and SPICE became the subject of his PhD thesis.

The 1973 version of SPICE consisted of 8000 FORTRAN IV statements on punched cards, which resided in 40K words of core memory when compiled. Wide exposure from a 1973 conference led to many requests for Nagel’s source code, which UC Berkeley distributed on 9-track tapes. People around the world started using Nagel’s code as the starting point for their own projects, so SPICE was quite likely the world’s first successful open-source software product. SPICE is still in wide use, either directly or under the hood of many EDA tools. (I have my own SPICE story, for another time.)

Note: Many thanks to Brian Berg, who organized this event and arranged to have the IEEE approve these Milestones, and whose speaker notes greatly aided in the creation of this article. Brian is a sparkplug at the Consultants Network of Silicon Valley, which underwrote this event.