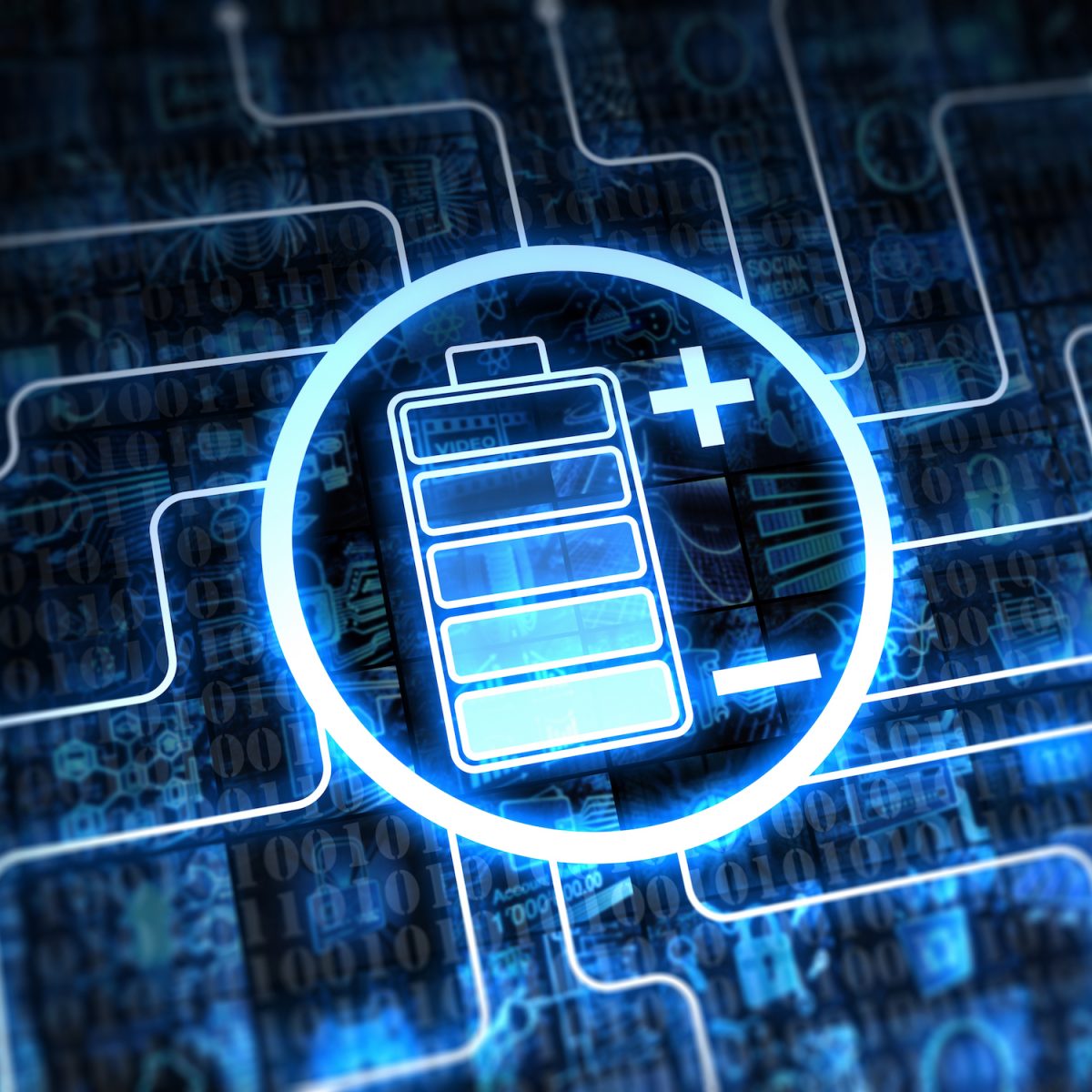 Storage Worked from All Angles
by Bryon Moyer

Batteries have historically been perceived as something of a staid technology – at least in a lot of minds. I remember back when we were diving into 3-V standards at JEDEC many years ago, and we invited battery folks to help advise us. I came away with the distinct sense that battery chemistry was pretty much what it was and would always be. Yeah, I saw you stifling that yawn…

Well, no more. Batteries are what will save the world! Either by powering electric-powered vehicles over distances that now require petrol or by storing and releasing renewable energy, acting as a buffer between when energy is available and when it’s needed, or by giving our gadgetry extra power and lifetime for doing more things with fewer recharge cycles. Everyone’s looking for the next Big Thing in batteries.

Well, there have been a number of diverse announcements over the last year or so, and we’re going to round some of them up here. Will one of these be the Great Battery Savior for the future? Only time will tell…

Batteries With a Tasty Solid Center

One of the concepts that we’ve discussed before is that of the solid electrolyte (although the original purveyors are gone). Over-simplistically speaking, a battery is a device with an anode and a cathode at two different energy levels and then some medium for transporting ions to get a current flowing. Historically, that electrolyte has been liquid – just like the first electrolyte you probably saw in high-school chemistry class.

But liquid electrolytes are messy, and, in particular with lithium-ion batteries, they’re flammable. Add to that a propensity for lithium dendrites to form and connect the cathode to the anode through a nice low-resistance path, and well, occasionally, sparks fly.

We saw last year that company Ilika was moving forward again with the LiPON solid electrolyte. They’ve recently made a further announcement offering up their Stereax P180 family for harsh environments. It supports a temperature range of -40 to 150 °C and is targeted at automotive, aerospace, infrastructure, and industrial IoT applications.

They didn’t go into detail on what they changed, but it involved the electrolyte and the encapsulation. They claim to have a substantial store of chemistries to choose from based on the work they‘ve done over the years.

From here we move to Austin, where the godfather of the lithium-ion battery and his team have announced a solid-state lithium battery with anywhere from 3 to 8-or-10 times the energy density of conventional lithium-ion batteries. And there seems to be some controversy swirling around it.

One of the dreams of many lithium-based battery projects is to use metallic lithium directly on the anode – something that’s too risky with the current setup. This new University of Texas paper uses lithium – or sodium – as the anode. The cathode is, in places, described as carbon on copper, but there’s also sulfur and the electrolyte mixed in there; the sulfur-to-electrolyte-to-carbon ratio is 47:43:10 (by weight). The sulfur could be replaced by either ferrocene (Fe(C5H5)2 or MnO2. The UT team sees the sulfur as a “redox center,” at which point I start to fall out of my chemistry comfort zone.

The electrolyte itself is a glass, specified as A2.99Ba0.005O1+xCl1-2x, where A can be Li or Na. So, at the cathode, that gets mixed in with the sulfur and carbon. 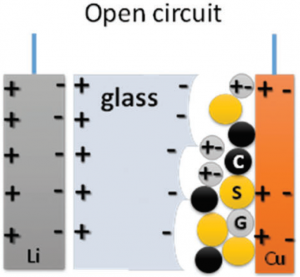 Since this paper was published, there has been some debate surrounding the mechanisms claimed. I don’t get the sense that anyone doubts the outcomes, but it’s more a question of how the outcomes come about. It’s been described as possibly akin to cold fusion in that way: the measurements are accurate, but the explanation put forth is in question.

I’ve seen objections couched in two ways. In one article, the essence of the complaint is described as saying the anode and cathode are both lithium, so there’s no energy difference, making this like a perpetual motion machine. That article was a summary of comments by others; it wasn’t directly from one of the skeptics, so the author may have gotten that wrong. As far as I can tell, the anode and cathode are not both lithium (although lithium does plate the cathode during discharge).

The other objection I saw (referenced in the prior article), which came directly from a skeptic, was focused more on the fact that, despite this redox center, nothing was reduced in the process. Sulfur remained sulfur, lithium remained lithium, etc. His contention is that, without some sort of chemical redox reaction, there’s no mechanism for freeing up energy.

These particular articles date from March, 2017, so they’re relatively recent. I’m not aware of a resolution at this point.

The third announcement in the solid-state category described a configuration with a garnet electrolyte (specifically, Li7La2.75Ca0.25Zr1.75Nb0.25O12, or LLCZN). They used a lithium metal anode and a sulfur cathode, but their big news was the addition of an aluminum oxide layer between the lithium anode and the electrolyte.

Previous to this, the impedance was too high to allow good, robust current flow – around 1710 Ωcm2. This appears to have been due to voids at the interface between the lithium and the garnet. The ultra-thin Al2O3 layer did a much better job of wetting the electrolyte; the lithium likewise wet the alumina layer more thoroughly, eliminating the voids and reducing the impedance to 1 Ωcm2 – effectively eliminating it. 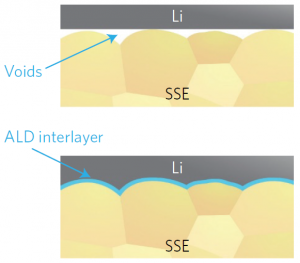 I asked why garnet was used instead of something like the more traditional LiPON. Dr. Eric Wachsman, Director of the University of Maryland’s Energy Research Center, said, “Garnet has higher conductivity than LiPON by a couple of orders of magnitude. A sulfide-based electrolyte (LGPS [Li10GeP2S12]) has the highest conductivity, higher conductivity than either, however [it] has stability issues and is difficult to process. Moreover, garnet has [a] wider voltage stability window and is unique in [its] ability to use Li metal on the anode and high voltage cathodes.”

Next we explore a completely different category of battery: the flow battery. A typical flow battery consists of two liquid chemicals that, when brought together, liberate electrical energy. The liquids are typically stored outside the battery and are then pumped in to form two thin layers separated by a membrane that lets the redox reaction occur. The exhausted liquids are then pumped back out. Recharging consists of refilling the tanks.

These are often bigger units, employed, for example, in renewable energy farms for interim storage. But a project from ETH Zurich and IBM Research Zurich has built a miniaturized version that can be used at the chip scale – with the added benefit that the liquids can cool the chips. They can generate 1.4 W/cm2 gross – a net of 1 W/cm2 after subtracting off the energy needed for the pump.

They manage the liquid flow using a 3D-printed polymer channel system that features wedge-shaped convergent channels that route the liquids into the reaction layers.

Meanwhile, a team at MIT went one better: a pump-free system. Picture a see-saw: with one side up, gravity pulls the fluids down; once down, they flip the see-saw so that the fluids can flow back down the other way.

This, of course, raises two questions. One: how does the see-saw flip? Prof. Yet-Ming Chiang responded that it’s done mechanically, requiring about one one-thousandth of the energy generated by the system – much more efficient than the pumped model. Question two is based on the fact that there are no external tanks to fill – so how do you recharge this? Turns out the chemistry they use is reversible, so you run a current the opposite direction and the fluids return to their original state.

Seaweed Served in an Egg-Box

And, for something completely different, a work out of Qingdao University in China. It’s based on the notion that, in commercial batteries, graphite is used on electrodes as a source of carbon. Instead of this, the team found a way to take algae and create an “alginate” – making carbon available through a more complex structure that resembles an egg-box. 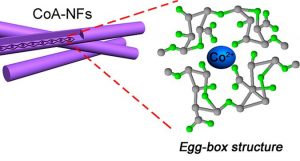 They found that, when used as an anode, they achieved twice the capacity of traditional graphite. Within fuel cells, it performed as well as platinum-based catalysts, but with better long-term stability. It also has high capacitance, making it useful in Zinc-air batteries and supercaps.

In related work, they took carrageenan from red algae and combined it with iron for a porous sulfur-doped aerogel with super high surface area for use in LiS batteries or supercaps.

There was one confusing bit where the material was used seemingly for anodes and cathodes. Dr. Donjing Yang clarified that there were two different projects. The anode use is what we described above; it actually goes back to 2015. More recently, they “reported high performance cathode materials based [on] the alginate, such as ideal crystalline LiFePO4/carbon hybrid microtube[s] (Adv. Energy Mater. 2016, 6, 1601549) and multi-shelled Ni-rich Li(NixCoyMnz)O2 (Adv. Sci. 2017, 4, 1600262).”

And that wraps up our run-down for this time. I fully expect to need to do another one of these in a while…