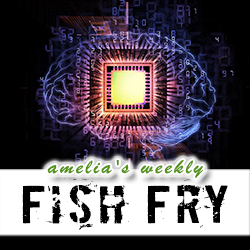 Happy Saint Patrick’s Day! This week’s episode of Fish Fry has absolutely nothing to do with Ireland or St. Patrick, but has everything to do with molecular robots programmed with DNA, general purpose computing on GPUs, and featherweight systems for unmanned aerial vehicles.  We start things off with a closer look at the creation of a new amoeba-like molecular robot by a team of researchers in Japan. This robot that can continuously change its shape, propel itself with cell-like motion, and can be controlled by DNA signals that respond to light. Also this week, we delve into the world of GPGPUs with Doug Patterson from AITech. Doug and I discuss the challenges GPGPUs were created to solve and where general purpose computing on GPUs is headed from here. We also dig into the details of a new featherweight system created by AITech and ADLINK developed for unmanned aerial vehicles.