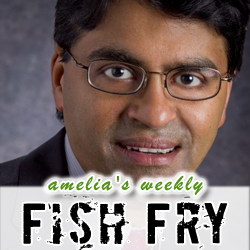 In this week’s Fish Fry, I interview Rajeev Madhavan (Magma CEO) about Magma’s Silicon One initiative, how he thinks Magma fits into the EDA ecosystem and where EDA should be headed in the future. Also, Mentor Graphics plays musical product lines and Catapult C finds itself with a chair….at another company. I’ll give some wild speculation on what actually happened.

I have a DE0-Nano Development Board to give out, but you’ll have to listen to find out how to win.