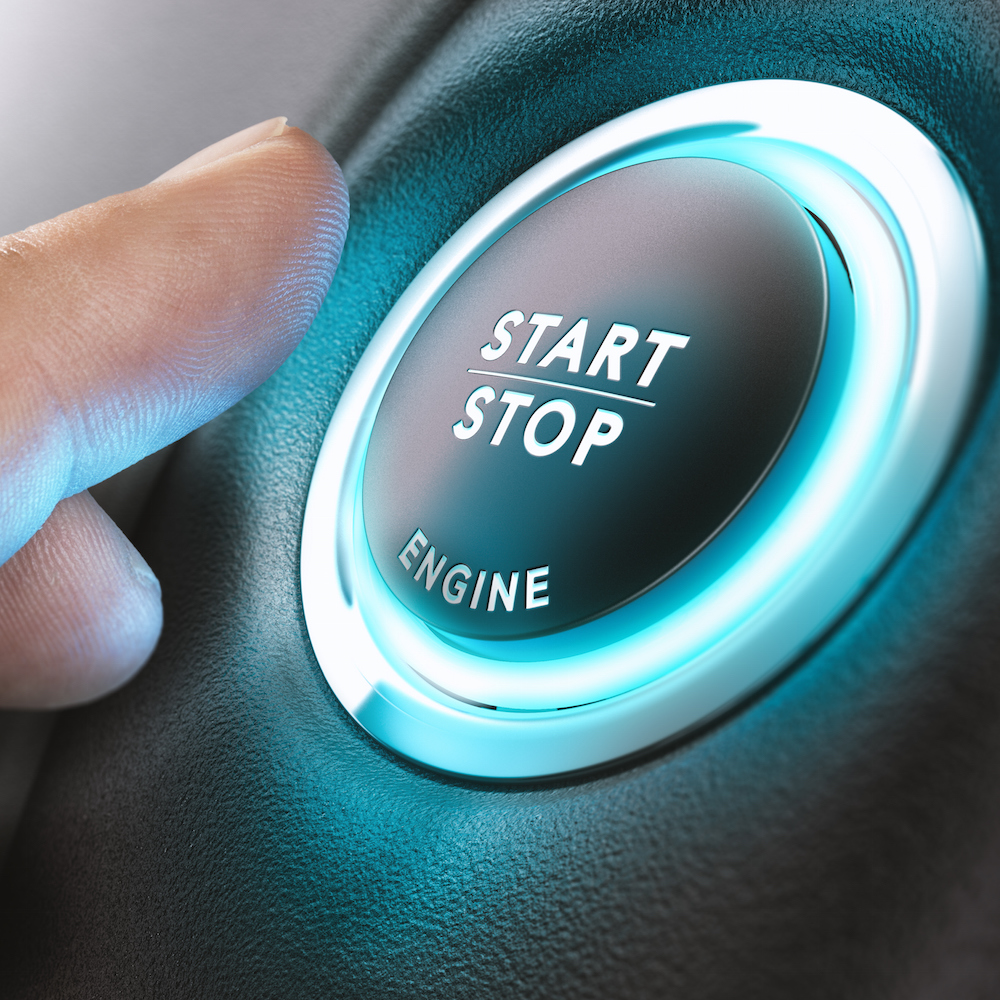 When Your Own Technology Poisons You

“Good habits formed at youth make all the difference.” — Aristotle

It seemed like such a good idea at the time.

Car keys are going the way of the dinosaur. But, like dinosaurs, keys evolved over generations until they were perfectly adapted for their time, and it took an unearthly cataclysm to knock them off the top of the food chain. This time, electrical engineers are the killer comet. And, just like the last time, there’s some messy collateral damage.

Keyless cars with push button starters seem like a cool advancement at first. Instead of twisting a mechanical key in the ignition, you just push a big red button on the dashboard and, like your PlayStation, the car boots right up. (Lamborghini hides its button under a theatrical fighter-pilot emergency latch.) You don’t even have to take the key out of your purse or pocket. As long as it’s somewhere nearby, the car figures you’re legit and lets you drive it. But that’s where the problems start.

As the New York Times reports, keyless cars are killing their owners. Why? Because nobody’s quite grokked how this whole keyless user interface works, so even when we think we’ve started, stopped, or parked the car, we haven’t. Owners who park inside an enclosed garage and walk away, thinking the car is shut off, wake up at the Pearly Gates, a victim of carbon monoxide poisoning. Even when they’re not moving – even when we’re not in them – these cars can be deadly. Unsafe at Any Speed, indeed.

The problem stems from the wireless interface between the car and its key. Overly clever automotive designers figured it would be fun to incorporate proximity detection into keyless “keys” so that you can simply walk up to your car and pull the door open without fumbling in your pockets for an old-fashioned key and turning it in the lock. Merely by having the key on your person, the car recognizes you as the owner (or at least, as an authorized keyholder) and allows you to unlock the doors, open the trunk, start the car, and drive away. Interesting in concept; flawed in execution.

Parking valets, automotive journalists, rich collectors, rental agencies, and other people with a lot of cars in one place hate keyless car keys. It’s too difficult to keep the keys a safe distance from the cars they control. Too close, and the cars aren’t secure. It’s too easy for someone else to hop in and drive away. Too far away, and it’s a nuisance to go fetch the key. It’s like hiding a shiny toy from a housecat or keeping a leash away from the dog’s line of sight. “Don’t let him see it or he’ll think we’re going for a walk!”

I fell victim to this myself (the unintended start/stop, not the poisoning) while renting a car. It was fun and novel at first but went downhill rapidly. I parked the car, pressed the button on the key to lock the doors, and then tugged on a door handle to make sure I’d locked it properly. Nope. The door opened again. Okay, I must have pressed the wrong button…

But the key was designed with only one lock/unlock button. There is no wrong button. It’s a toggle. Being the clever engineer that I am, I recognized this as a binary system and pressed the button once more, figuring that if the first press unlocked it, a second press will lock it. Press, click, tug the handle, and… still unlocked.

Okay, maybe a double-click? Nope, that just toggles the locks twice more. Maybe it’s a long press to lock? Whoops, that sets off the car’s alarm siren. Now I’m in a crowded parking lot, fiddling with an unfamiliar car, surrounded by people who assume I’m either stealing it or are simply incompetent to operate an automobile. Opening the driver’s door just makes the alarm angrier, until I press the starter button on the dashboard to fire up the vehicle. This calms the car and seems to be the preferred method for silencing the alarm. By starting the car. Obviously.

But I still can’t lock the doors. What’s the trick? Finally, it dawns: I’m too close. Tossing the key to a willing accomplice confirms that the car is, in fact, locked, but only if the key is far enough away. Bringing it any closer automatically unlocks it. What’s the critical distance; the security horizon? No way to know. Another UI failure. It’s now impossible-by-design to verify that your car is locked.

It got worse. Many hours later, I went back out to the parking lot… to find the car’s engine running. A thin plume of exhaust smoke twisted through the cold air, and the sound of an idling engine was clearly audible. Hey, what? How long has this thing been running?

Not very long, judging by the mostly full fuel gauge, although I imagine that a four-cylinder engine running with no load gets pretty good mileage. Make that infinitely poor gas mileage, given that it’s not covering any miles. Divide-by-zero, and all that.

In retrospect, this was a gas/electric hybrid car and it must have been running on batteries when I parked it, so it was already silent when I walked away and locked it (several times). But the car thought it was still “on,” and would occasionally restart the gas engine to recharge the batteries. Presumably, this thing had been happily starting and stopping itself all day long. An ironic waste of fuel for a hybrid vehicle. Either it didn’t care that nobody was inside the car and that the key wasn’t in it (or anywhere nearby), or the key’s transmitter has a longer range than seems strictly prudent. Does the key’s range decrease as its battery dies? If so, fresh batteries might present a real security risk. UI failure #4.

Still more traps lurk for the unwary. It’s remarkably easy to strand yourself or your friends. Maybe not as bad as poisoning, but potentially hazardous to your relationships and to your insurance premiums. If your passenger exits the car with the key in his/her possession, you’re marooned. You can’t lock the doors (no button to push), can’t roll up the windows, and can’t restart the car (ditto) to go chase down your friend. With luck, the key-holder will be within walking distance of your unlockable, undrivable car. If they’ve just boarded a plane, you’re nuked. Be very careful dropping off spouses or coworkers.

The problem here isn’t the wireless technology itself, or even the concept of keyless keys. It’s the user interface. We’re accustomed to removing the key from a car and knowing that it shuts off all functions, no questions asked. It’s a simple gesture that just works, like hanging up an old-style telephone. No guessing required. By breaking that universally accepted habit, keyless keys force us to rethink a thoughtless process. And that’s never good UI design. Interfaces should be invisible and intuitive, not spooky, mysterious, nonstandard, and un-discoverable. A Dvorak keyboard layout may be better in terms of pure ergonomics, but it wreaks havoc with everything we’ve learned about productivity. Even tiny little touchscreen keyboards on smartphones retain the awkward, but familiar, QWERTY design. There’s something to be said for ingrained habits and old user interfaces.

2 thoughts on “When Your Own Technology Poisons You”