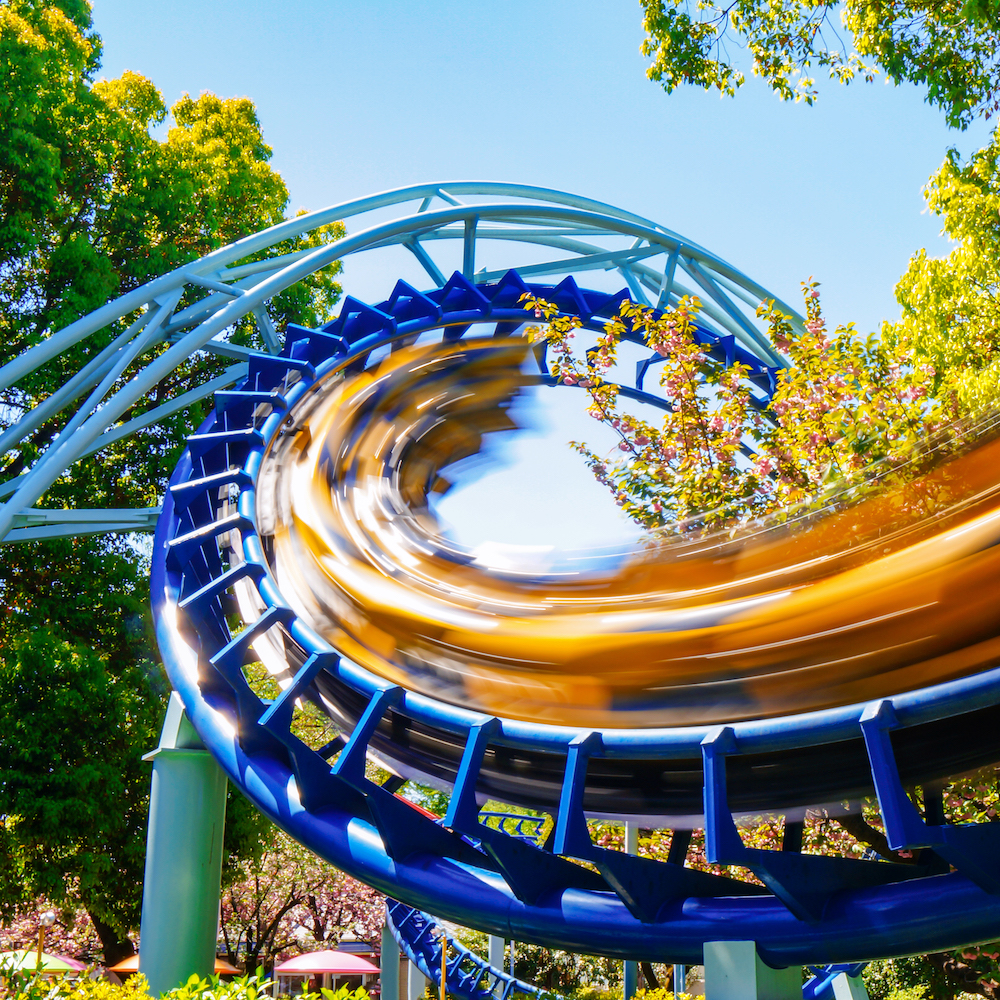 What Roller Coasters Can Teach Us About Economics

There’s Something Behind the Game Theory
by Jim Turley

“Is it a really evil petting zoo?” – the ghost pirate LeChuck

Ages ago, there was a computer game called Roller Coaster Tycoon. It’s still around, and thankfully, the developers haven’t even updated it all that much. Like the original 1977 release of Star Wars, it’s better in its original form without “improvements” from its creator. I loved playing that game, mostly because I got to design my own roller coasters. How often do you get to do that?

The point of the game was to manage a successful amusement park, including all the rides and attractions, but also the infrastructure like the food court, drink stalls, security stations, garbage cans, walkways, and more. It was a game of micro-management, where you’re constantly clicking from one minor crisis to another, trying to keep your visitors safe from harm while also extracting the maximum amount of cash from their pockets. Fine, but again, the attraction for me was designing outlandish thrill rides.

If your little kiddie teacup ride was boring, your virtual visitors wouldn’t show much interest, and you’d have to lower the ticket price to get anyone to ride it at all. But if your ride was exciting, they’d queue up for hours and pay top dollar for the privilege. A really top-notch, nausea-inducing, life-flashing-before-your-eyes thrill ride could rake in huge bucks with each rider. Score!

But here’s the rub. I’d create the most threatening thrill rides possible, and the long queues told me that riders’ interest levels were pegged at maximum. The line snaked out of the park. I’m a genius. Except… the park was losing money. How can that be? I’ve got the hottest ticket this side of Virgin Galactic. Clearly, the game’s financial modeling is broken.

Or maybe I’m just a better engineer than an economist. It took me an embarrassing number of replays to uncover my obvious mistake. And the lesson has paid off ever since.

In short, you never want customers standing still. People in a queue don’t spend money. Doesn’t matter how much they’ll pay for a ticket at the end of the wait, queueing time is wasted time, economically speaking. An analysis of my park’s finances showed the food stalls made more money than my super-duper roller coaster. Seriously? The hot dogs?

That’s because volume trumps margin. Better to have a lot of small transactions than one big one. Food stalls were everywhere in the park, so customers could grab a snack – that is, they could spend money – and quickly be on their way to spend money again elsewhere. The key to food and drink profitability was to keep the lines short and the cash flowing. Since multiplication is commutative, increasing X is just as valuable as increasing Y. Increasing frequency of transactions (x) was an easier path to profit than maximizing profit per transaction (y).

You may have noticed this when trying to sell a house. Naturally, you want to ask top dollar for your house, so you list it at the high end of the price range, hoping that maybe some idiot will offer you the full listing price. If not, you can always reduce it a bit later. Great strategy, right?

So how come your real estate agent doesn’t agree and instead suggests a lower opening price? “Price it to sell,” she says. But why? She’s paid on commission, so aren’t her goals aligned with yours? Don’t you both want the absolute maximum transaction price to walk away happy?

Nope. Real estate agents know that two quick sales are better than one long, slow, high-priced one. Turnover is king. You and she have fundamentally different strategies. To you, this is a one-off event (until the next time you move, anyway), whereas she’s in this for the long haul. Volume trumps a bit of profit on each transaction. Your goals are not aligned.

But this doesn’t apply to all sales situations. Offer a car salesman a lowball price and he’ll smile and politely ignore you. But wouldn’t your rock-bottom offer be better than no sale at all? Wouldn’t he rather take a cheap offer and increase volume? It’s not that simple, largely because automakers offer their dealers all sorts of nonintuitive incentives to keep, move, or hold certain cars. Financing plays a role, too, as do rent, insurance, and utilities. Keeping an interesting car on the lot generates foot traffic. He might not want to sell it even if you offer thousands over the asking price. It’s a strange business.

Commercial real estate is stranger still. Neighbors complain when the local strip mall has empty storefronts. “Well, obviously, they’re asking too much for rent! Any idiot can see they should be less greedy and fill those empty units. I want a yarn store!”

Not correct, but thank you for playing. Lowering the rent on empty units antagonizes the existing tenants occupying the other units. Do they get a price break? Does their rent go down? For how long? Rents are often controlled (or at least, closely monitored) by local municipalities, so you can’t arbitrarily raise or lower rents without inviting scrutiny, if not lawsuits. Perversely, tax codes sometimes provide an incentive to keep properties vacant. Or, landowners will slow-walk construction work to keep the local permits alive. In short, there are a lot of factors involved in managing commercial real estate beyond simple supply and demand.

Movie theaters, like my virtual amusement parks, make their money on snacks. The movie is just a marketing gimmick to get you in the door; the real money is in selling overpriced food and drinks. That’s why they’re so adamant about prohibiting outside snacks. That’s like taking your own food into a restaurant. Or your own movie into a movie theater.

Printed newspapers and magazines – remember those? – have a perverse incentive to give away their product. Most print publications are supported by a combination of advertising revenue and monthly subscriptions, with the lion’s share coming from the ads. Advertising rates are based on the number of people who see the ads, and because it’s too complicated to calculate rates down to the individual reader, they’re chunked up into round numbers. This much for the first 10,000 readers, this much when circulation hits 50,000, and so on. If you’ve got 49,000 paying subscribers, it’s worth giving away 1000 copies (known as a forced free trial) to hit the 50K milestone and bump up your ad rates. Ever wonder where free magazines come from?

In Roller Coaster Tycoon, the best strategy is not to design the best roller coaster. It acts like a black hole, sucking all your visitors into the long waiting line where they spend no money. Short-duration rides are also better than long rides because they increase throughput. Two or three boring rides are more profitable than one spectacular thrill ride. Sure, they’re less interesting to design, but that’s not the point of the game (unless you want it to be). What gets measured gets done, even if that’s not what you wanted or intended. In the game world, as in ours, it’s the quantifiable parts that define our goals.