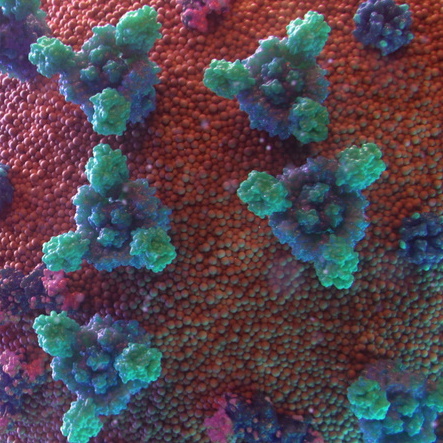 I don’t know about you, but I’m becoming a mite frustrated with the current state of affairs regarding COVID-19. My brother and I have just been obliged to cancel our mother’s 90th birthday celebrations, which were to be held in July 2020 in England (we’ve been planning and purchasing all sorts of things, like a party tent for my little bro’s back garden). I’m going to have to do something about the plane ticket I booked late last year to attend the festivities. Suffice it to say that, whilst understanding the reasoning behind all this — she’s been squirrelled away in her home for a couple of months now — my mom is somewhat miffed; we might even go so far as to say peeved (please excuse my extreme language). Now it’s personal.

As an aside, viruses and the diseases they cause often have different names. According to the World Health Organization (WHO), viruses are named based on their genetic structure to facilitate the development of diagnostic tests, vaccines, and medicines. By comparison, diseases are named to enable discussion on disease prevention, spread, transmissibility, severity, and treatment. (This sounds much better than saying scientists can’t agree on anything, including what to call things.)

Irrespective of our leaders assuring us that they have everything under control and we’re not to worry, we’ve all heard horror stories about how long it takes to get tested for the coronavirus. Where I live, you would be lucky to persuade someone to evaluate your condition if you were to crawl into a local hospital on your hands and knees and pass out on the emergency room floor. And, even if you do manage to become one of the tested few, it can take hours or days to be informed as to the results.

In reality, being tested only when you have been brought to your knees is not as optimal a solution as one might hope. Ideally, we should all be able to get tested wherever and whenever we feel like it — I’d be happy to do it every day — thereby allowing us to self-isolate and warn anyone with whom we’ve come into contact at the first sign anything was untoward.

Happily, technology is on our side. Some emerging biotech companies, which once would have focused on things like bacterial infection, drug discovery, or cancer detection, are pivoting to develop point-of-care testing for COVID-19.

Leveraging advanced microfluidics and microelectromechanical systems (MEMS) in conjunction with biocompatible materials such as graphene to develop novel biosensors, such companies are working toward FDA approval on technologies that will deliver test results in as little as 60 seconds. Now, that’s what I’m talking about!

I’m sorry, a few months ago I read a book called The Joys of Yinglish by Leo Rosten, and one of the things that stuck in my mind led to the title for this section. I can’t recall the official name for this practice — I’m working from my kitchen table and the book is in my office (“I miss my office,” said Max, sadly) — but one of the topics Leo mentions in his classic compendium and lexicon of common words and phrases in Yinglish (i.e., words originating in the Yiddish language that became known to speakers of American English due to the influence of American Ashkenazi Jews) is the practice of taking a word like “testing” and playing off it by following it with something like “shmesting” (it makes more sense when Leo explains it).

But we digress… The point I’m (nebulously) trying to make is that, while testing is incredibly important, on its own it’s not enough. We need more information regarding the ways in which the human body interprets and is affected by SARS-CoV-2. By detecting disease markers in proteins, RNA, and DNA, we can use predictive analytics about different populations to preemptively manage the course of this disease.

And remember that, much as I hate to say it, COVID-19 may well turn out to be only the “pandemic du jour” — a precursor of pandemics to come, if you will — in which case it would behoove us to learn how to do all this stuff before something more serious like Captain Trips comes our way.

Who is working on this sort of thing? Well, I’m glad you asked, because I was recently introduced to two companies who are engaged in some very interesting activities in this area.

The guys and gals at Cardea Bio are the developers of graphene-based biology-gated transistors, called “Cardean Transistors,” that directly read the molecular signals of active biology using nano-scale electronics to rapidly detect disease markers in proteins, RNA, and DNA.

The term CRISPR (clustered regularly interspaced short palindromic repeats) refers to a family of DNA sequences found in the genomes of prokaryotic organisms such as bacteria and archaea. These sequences can be used as a guide to recognize and cleave specific strands of DNA.

The folks at Cardea Bio can build surface chemistry layers on top of graphene (a biocompatible material), literally tying their version of CRISPR to the graphene, thereby allowing them to combine small bits of biology with the transistors.

As we see in this video from March 2019, Cardea’s CRISPR Chip allows for human biological systems to be read directly by computers.

Cardea’s CRISPR-powered devices were originally conceived for purposes like detecting genetic mutations, but they also provide a new way of testing for infectious diseases. This “precision-medicine” approach both detects SARS-CoV-2 in near real-time and provides more information on the way in which the human body interprets and reacts to the COVID-19 disease.

Another interesting player in this space is HEMEMICS. The chaps and chapesses at HEMEMICS recently received a grant from the U.S. Department of Health and Human Services to speed development of its Bluetooth-connected point-of-care biosensor tool, which detects SARS-CoV-2 and associated antibodies from nasal swabs or whole blood, thereby meeting a critical need to distinguish between people with active infections and those who’ve developed antibodies to the virus.

The actual sensing elements in HEMEMICS biosensor arrays are comprised of carbon nanotubes. Each HEMEMICS biosensor module — which looks a bit like a Flash memory stick — includes a multi-layered chip (two cores with an FPGA) from Cypress Semiconductor, a Bluetooth LE radio, and a MEMS die. 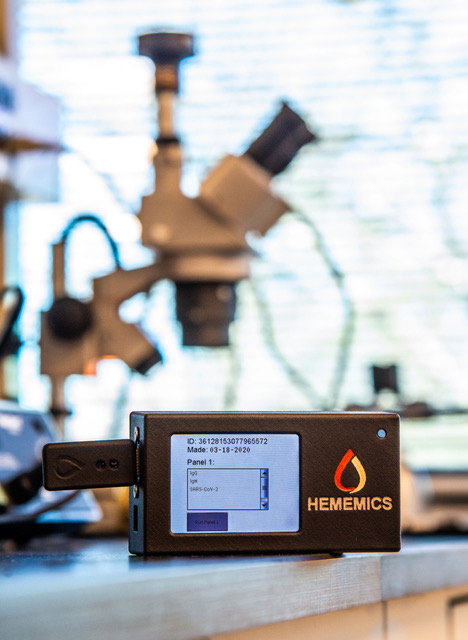 The biosensor module is inserted into a handheld device the size of a smartphone (Image source: HEMEMICS).

The biosensor module is inserted into a handheld device the size of a smartphone, which allows for ease of use in both the field and in traditional care settings. More importantly, the technology can link the test results with cloud-based data management networks, thereby allowing for real-time geographical mapping of outbreaks or for instantaneous pre-travel screening at airports or ship terminals.

Did you spot where I casually mentioned a “MEMS die” in the context of the HEMEMICS biosensor module? Well, this little scamp is made by the folks at Rogue Valley Microdevices. Based in the Rogue Valley area of beautiful southern Oregon — approximately halfway between San Jose, California and Portland, Oregon — Rogue Valley Microdevices is a MEMS foundry that (in their vernacular) “does a ton of work with biomedical sensor companies.”

Call me “old fashioned” if you will, but I’m getting a tad tired of hearing about tempting technologies being established in other countries around the world — I much prefer to hear about things being designed, developed, and deployed in England (where I first graced this planet with my presence) and America (where I currently hang my hat and eat my bacon sandwiches).

The reason I mention this here is that I really like the fact that  Rogue Valley Microdevices is one of the few US-based manufacturers of the biosensors used in next-generation point-of-care test systems for things like COVID-19.

These are trying times for all of us — it’s going to take a long time for us to return to the way we used to live, happily rubbing shoulders with each other in public places — but I know we will prevail, especially when we have companies like Rogue Valley Microdevices, Cardea Bio, and HEMEMICS covering our derrières.