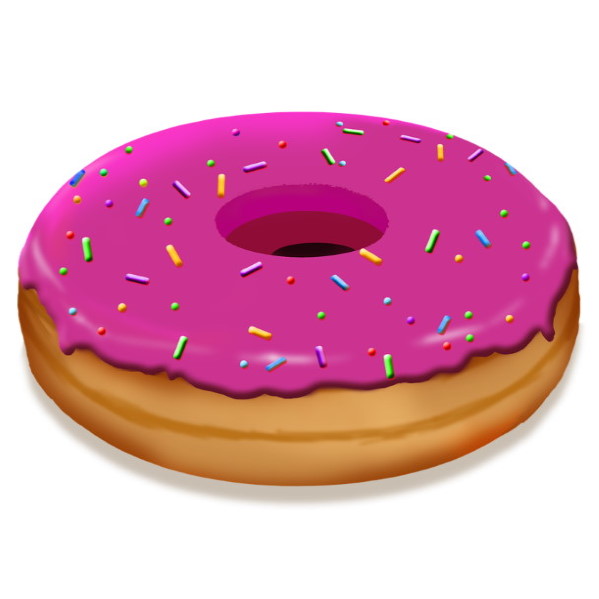 In my previous column on this topic, I noted that — for reasons that will be revealed in the fullness of time — I’m currently wrestling with a passel of perplexing posers revolving around the math associated with revolving around a torus (plural tori), which is colloquially known as a donut.

We commenced our thought experiments with a simple strip of paper. Wrapping one end round and attaching it to the other end resulted in a ring with two edges (top and bottom) and two faces or surfaces (inside and outside). We also noted that, if we were to put a finger at some point on one of the edges and move it around the ring until we returned to our starting point, we would — not surprisingly — have performed a single orbit (i.e., circumnavigated the ring a single time).

Next, starting with the same strip of paper, we gave the end a half-twist by rotating it through 180° before joining the ends together. This resulted in a Möbius strip with a single edge and a single side. In this case, if we were to put a finger at some point on the edge and move it around the ring until we returned to our starting point, we would have performed two orbits along with a full 360° rotation.

We also noted that if we were to give the end a full twist by rotating it through 360° before joining the ends together, then we would return to having two surfaces and two edges. We graphically summarized the three cases we’ve discussed thus far as illustrated below. 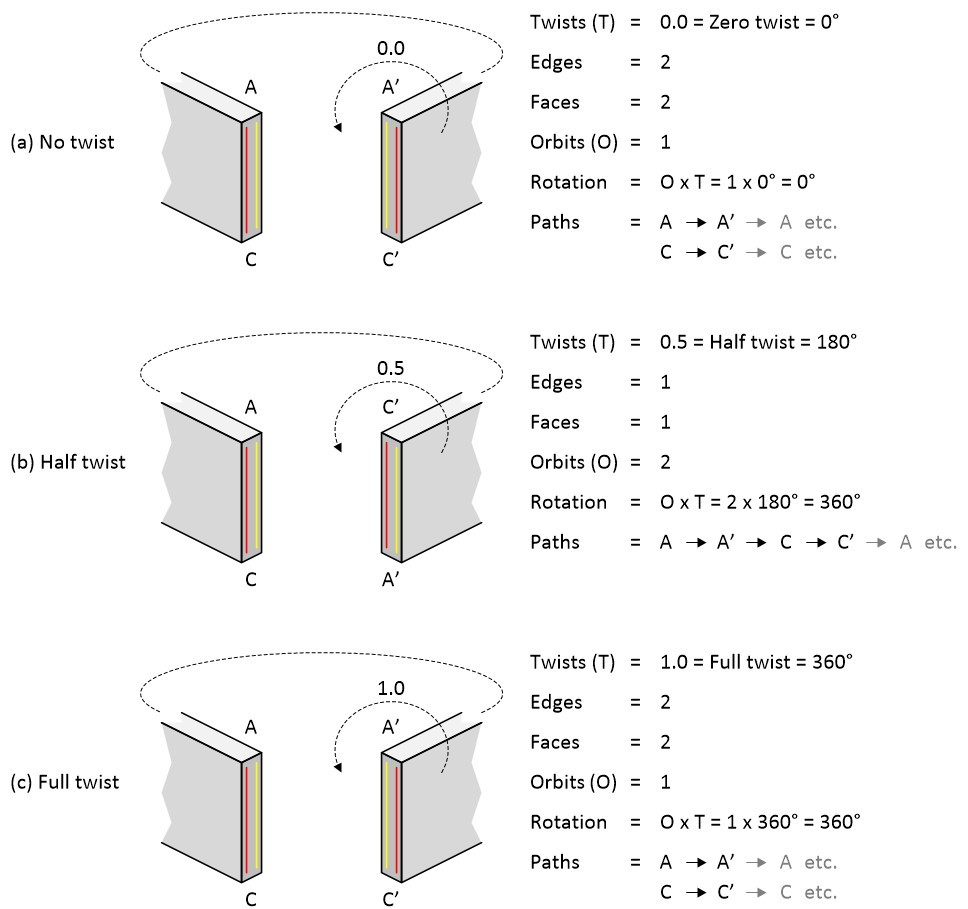 At this point, we decided to “up our game” with what we called a “cross-strip,” which we created by attaching two additional thin strips to the center of the original strip, one on each side mounted at 90°. We then used this cross-strip to form three rings: the first with no twist, the second with a half twist, and the third with a full twist. Once again, a graphical summary of these three cases is illustrated below. 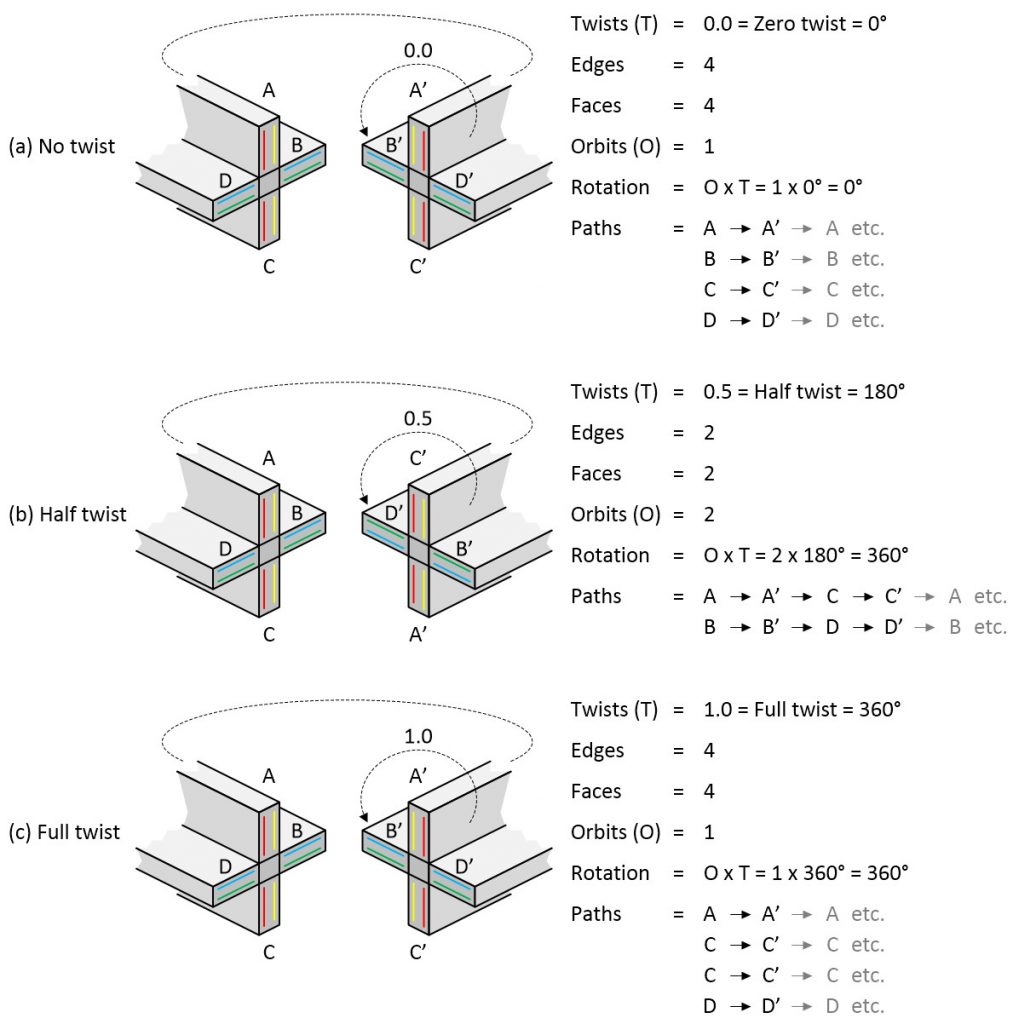 We concluded the first column by considering an additional possibility. Suppose that, just before connecting the ends of the cross-strip, we apply a quarter-twist to one of the ends by rotating it through 90°. We then posed some questions regarding this quarter-twist case. How many edges will we have? How many faces will we have? And, if we place our finger at some point on the edge, how many times will we go around the circle before we return to our starting point? The answers to these questions are presented in the diagram below.

As an aside, and as seen in the comments to the original column, my friend Peter Traneus Anderson (a.k.a. Traneus Rex) correctly answered this poser. He also followed up with one of his own, which can be summarized as follows:

I will leave you to noodle on that one for a while (just be warned that Peter is a tricky little rascal). Returning to our quarter twist scenario, I don’t know about you, but I found this result to be quite surprising. In the case of the simple strip, we ended up with a single side and single face by applying a half twist; by comparison, in the case of the cross-strip, we achieved the same effect by applying only a quarter twist. “How can this be?” I thought to myself.

The answer may be obvious to you, but I lay awake at night wrestling with this conundrum. Eventually, I worked out a solution that seems to make sense (at least, to me). Here’s the way I slogged my way through this. Suppose we return to having a simple strip like the one we started with, but we apply only a quarter twist as illustrated below:

Simple strip with a quarter twist — bringing the ends together (a) and extruding (b) (Image source: Max Maxfield)

Now suppose that we somehow “extrude” the strip from its A’C’ edge such that it passes through (and merges with) the AC end of the strip as illustrated in (b). If we keep on extruding the A’C’ edge as it proceeds to circumnavigate the strip — undergoing another quarter twist on the way — then, when we return to our original starting point, our extruded A’C’ edge will now be able to join with our AC edge such that A’ connects to C and C’ connects to A, which is sort of equivalent to when we applied a half twist to our original cross-strip.

Similar to the way in which 64 is the new 40 in terms of age (I keep on telling myself this every day — and it’s even true if the former is in decimal and the latter is in hexadecimal), when it comes to tori, a quarter twist is the new half twist if we look at things in the right way (you may find it helps if you dim the lights and squint a little).

Now consider an additional, related, conundrum. Suppose we start with our original cross-strip and apply a one-and-a-quarter (1.25) twist to the end before joining the two ends together. If we were to look down on our torus (donut) from a bird’s eye point of view, we would see five curved “spokes” as illustrated below (don’t ask me how I know this because I’ll never tell). 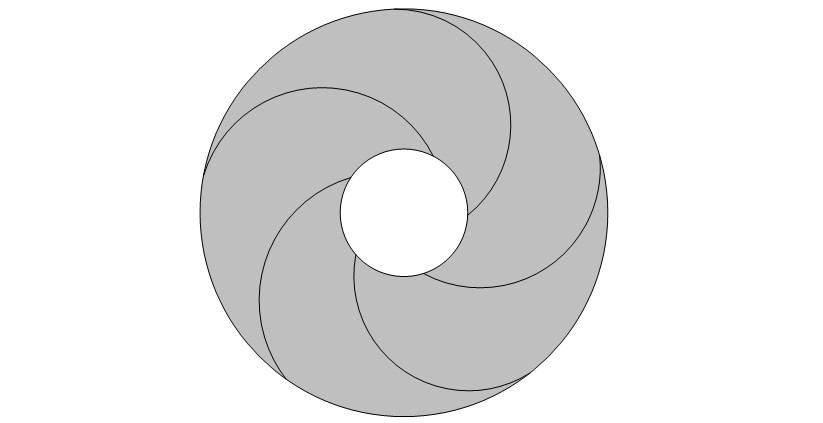 Where on earth did these five “spokes” come from? It took me ages to work this out (this is another poser that I eventually wrapped my brain around in the wee hours of the morning). This all stems from our realization that a quarter twist applied to our cross-strip is sort-of equivalent to a half twist applied to a simple strip. Thus, if we apply 1.25 twists to our cross-strip, this is sort-of equivalent to applying 2.5 twists to a simple strip, and 2.5 twists is five half twists, and each half twist results in a “spoke” as seen looking down on the donut.

PS Once you’ve wrapped your brain around all of this, please feel free to join me in contemplating having to work with a very-cross-strip indeed:

This is formed from four simple strips merged at 45° to each other (a cross-sectional view is shown in the image above). Assume we apply a 3/8th twist to one end before joining the ends together. You know the drill: how many sides, faces, and orbits will we have?