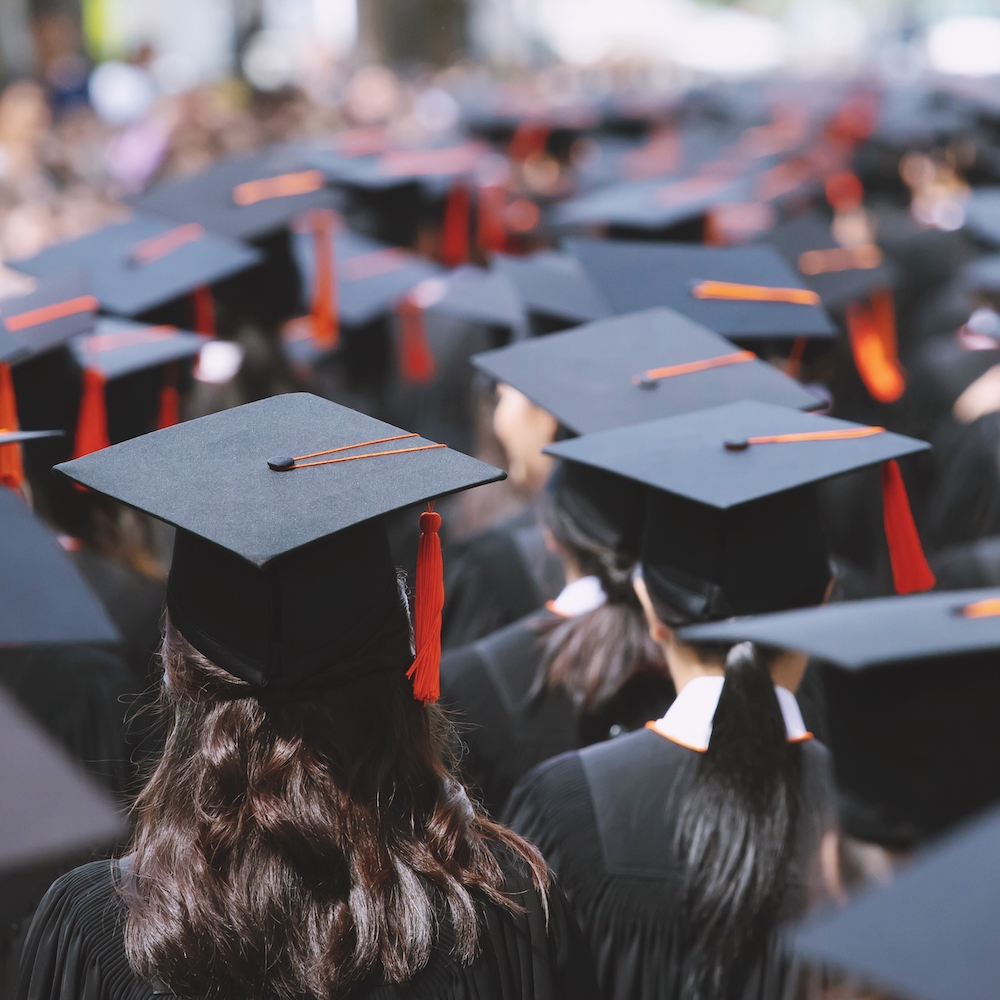 To the Graduating Class of 2020

Thoughts on Starting a Career in Engineering
by Jim Turley

Note: I was inexplicably invited to address a graduating class of Electrical Engineers, which included my nephew, Daniel. That gathering got canceled, of course, so in the spirit of design reuse I’m summarizing my address here.

Thank you for coming, and thank you, class, for becoming engineers. It’s a shame you couldn’t find a better speaker, but apparently all the good ones were either busy or too expensive. Instead, you’ve got me: a pudgy middle-aged white guy with no charisma. So, I’m qualified to be President, apparently, but maybe not to address a roomful of newly minted EEs. Nevertheless, I’ve prepared some remarks that might serve you in your engineering careers. Here goes.

I don’t like the word “career.” Military officers have careers, or you can be a career civil servant. Engineering is more like an adventure. It should be exciting, ever-changing, and frequently scary.

Scare yourself. Make choices that seem crazy, frightening, and doomed to failure. Apply for jobs you’re not qualified for. Stretch, overestimate your prowess, reach too far. This is a fast-moving industry, so the next big thing will always seem beyond you and out of reach. You’ll probably fail, but that’s true of most worthy endeavors. What’s the point of engineering if the outcome is predetermined? Join a startup. Move to another country. Learn another language (Rust, C++, and Swift don’t count). Even if it doesn’t work out, you’ll have a hell of a story to tell.

Life is a pinball machine: we bounce around and can’t predict the outcome. We can nudge things a bit or tilt the odds, but there are too many variables to be deterministic, so we just have to learn to work with inertia and uncertainty. The important thing is – scare yourself silly. Think of Samwise Gamgee and his first step beyond the Shire.

Since you’re graduating from a major West Coast university you already know that during America’s westward migration the sissies stayed home and the weak died along the way. You’re the tough ones who made it. “Faint heart never won fair maiden.” Or design awards. Or that promotion.

We’re messy imperfect meat machines and we’re hard-wired to be more afraid of loss than we are motivated by gain. It’s a 2:1 ratio. They’ve measured it. Why else would people travel halfway around the world and eat at McDonald’s? Chef Anthony Bourdain said that we can’t enjoy a truly great meal without the constant willingness to experience a bad one. We’re naturally conservative, scared, and risk averse. Ignore those impulses and reach for the impossible. Make your palms sweat. “A man’s reach should exceed his grasp, or what’s a heaven for?1”

Trivia: There are places on earth so remote that your nearest neighbors are astronauts.

Life isn’t a zero-sum game. Chess and checkers and basketball and horseshoes are zero-sum games. You count up the winners and subtract the losers and you get zero. Jeopardy! is a negative-sum game: there are two losers for every winner. Spelling bees are the worst. Everybody loses, except for one 12-year-old kid at the end. You take every school-age kid in America, put them in the local, regional, statewide, and eventually the national spelling bee and every single one of them loses.

We have a tough time with this in our culture. Subtly and unconsciously, we learn that our successes need to somehow be “bought” with an equal number of failures, like Newton’s Third Law of Karma. We think of the dumb blonde or the musclebound lifeguard: they’re good-looking, so they can’t also be smart. But it doesn’t work that way. You can be gorgeous and intelligent, and witty, and charming, and accomplished, and a good person. Just look at me.

Some of us are also raised to know our place. Success and accomplishment are for other people, not for us. We’re plodders. We’re not special enough; we’re not destined for greatness. I’m not guaranteeing that you’ll achieve those things, but I can guarantee that you won’t if you never try. Sometimes the biggest hurdle is that first one we set up for ourselves. You can’t be afraid of actually getting what you want.

Don’t fall for the myth of originality2. Don’t assume your clever or inventive ideas have already been debunked by somebody else. Edison wasn’t the first to invent the lightbulb. Henry Ford didn’t invent cars. There were other Facebooks before Facebook. You are the rock star people will talk about.

The third point is, be nice. Don’t be a jerk. You guys don’t really need to hear this because you’re all nice people already. Not like those other universities. They’re a bunch of rectal orifices. They probably all majored in EE with a minor in proctology.

Engineering is about things, but having a job is about people. No matter what your job function is, or how it changes over time, you’re always working for somebody. Even if you’re self-employed, you’re working for your customers. Somebody has to buy your product or services. Somebody has to hire you. Somebody decides whether to pay you or to recommend you to a colleague, and so on.

The stereotypical engineer is supposed to be bad at social interaction, but that isn’t always, or even often, true. See Rule #2, above.

Engineering is also about reliability. Your design should work (eventually) because someone hired you to make it work and you said it would. Keep your word. That’s being reliable. That reliability and dependability will be more important as your career moves on. When people can depend on you, they’ll trust you with bigger projects, bigger promotions, and bigger opportunities. Frodo Baggins didn’t say, “it got too hard.”

Be on time. For everything. Being late doesn’t make you look busy or carefree. It just makes you a jerk acting more important than everyone else. Actor Tom Hanks always shows up at least five minutes early for everything3.

Talk like a person, not a corporate drone. No corporate-speak. Never let words  like “key learnings, level-set, impactful, seamless, creative disruption, journey management” cross your lips. And stop saying “literally.” You’re doing it wrong. A minor suggestion is not a genius life hack. Nothing is must-see or must-do or the ultimate best-ever. You’re not competing for likes or followers or swipe-rights. You’re an engineer building trustworthiness. That’s how you get ahead in your career and avoid being a jerk.

The point of all this is, people will hire you for you, in addition to your technical skills. After all, no matter how good an engineer you are, there are 1000 other better ones out there somewhere, and the hiring manager probably can’t tell the difference anyway. If there’s a test, multiple applicants will get the right answer. What sets you apart? If you’re reliable and dependable, if you under-promise and over-deliver, if people can delegate to you and not worry about it, you’ll get the job. And the one after that.

If/when you become somebody’s boss, it’s even more important to not be a jerk. A good boss is a good partner, employee, and team member. Work on behalf of your direct reports, not your bosses. Motivating your underlings isn’t about pay; recognition and simple respect are far more important. Sometimes we’ll take a low-paying job (see Rule #1) because we like the people we’ll be working with. World-class motivator Napoleon Bonaparte said people will fight long and hard for a bit of colored ribbon. They still do.

Non-jerkiness extends to your customers, too. Don’t go creating devices that require needless Internet subscriptions just so you can extort more money from your customers. Your car still runs even if the company that made it goes bankrupt. So do your air conditioner and your toaster. Be like those guys.

Trivia: The Vikings never wore helmets with horns. Where would they have gotten them?

The EE life is a treadmill. You run just to stay in place, like those cartoons where the scenery scrolls in the background. Not all jobs are like this; just yours. That’s a good thing. It’s what makes engineering interesting. There’s nothing more boring than a job that’s the same every day until you retire or die.

Be a renaissance person. Learn about corporate finance (EBITDA, revenue vs. income, P/E ratios). You can learn the basics in an afternoon on Wikipedia or over a few beers with someone from Accounting. Same goes for marketing and sales (which are not the same thing). Learning these won’t somehow lessen or dilute your technical acumen (see Rule #2). You’ll still be an engineer. They’ll still let you go to nerd conferences. Don’t be ashamed if you’re a little business-curious. Let your flag fly.

Leverage your second or third skill. Good at music? Combine it with engineering. Like travel? Handy with a table saw? An expert on Tuvan throat singing? You’re likely one of only a handful of people with that combination of skills, making you uniquely valuable. And happier.

Learn to code. It’ll set you apart from other EEs and help you appreciate the machine better. Be a switch hitter. Co-engineering is a big thing. Programmers make better hardware designers, and vice versa.

Growth areas? Maybe get into security. Machines are complicated with a high statistical probability of either failure or vulnerability. Or packaging technology, wireless interfaces, AI/ML, or self-driving cars. Take your pick. Or make up your own.

That’s all I got.

You’ve all got EE degrees. You’re masters of the universe. Yours is the superior intellect. And you know what? We create the world.

Overall, we’ve made something like 13 sextillion (that’s 1.3 × 1022) transistors. That makes them the most widely manufactured device in all of human history4.

Engineering is a rational discipline in service of an irrational populace. You straddle both worlds, more so than most. We are the music makers and we are the dreamers of dreams5. And remember: one 18” pizza is larger than two 12” pizzas.