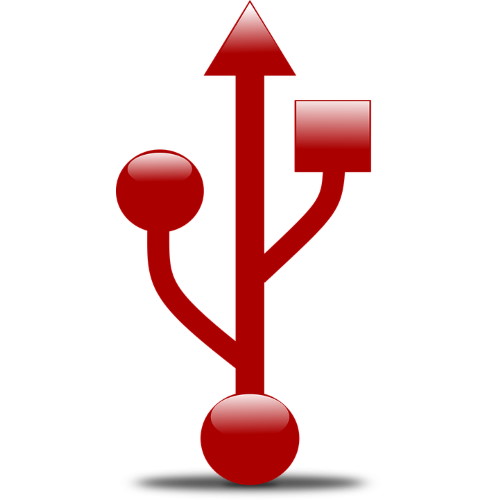 The A, B, C of USB for Beginners

I don’t wish to appear greedy, and I certainly don’t wish to boast (I pride myself on my humility), but I do flatter myself that I know more than my fair share of Bobs (that is, people called Bob, not the hair style of the same moniker). I could start naming names, but (a) they would all be called Bob and (b) we would be here all day.

Suffice it to say that one Bob in particular is much on my mind at the moment, not least because we both have offices in the same building. The Bob in question is a multifaceted individual. There’s his “Sporty Bob” persona when he dons his shorts to go to the gym, his “Party Bob” personality that makes its presence felt whenever cake makes an appearance on the scene, and his “Storyteller Bob” character whenever he feels there’s a tortuous tale that needs to be told (which is most of the time now I come to think about it), to name but a few. He truly is a “Bob for all Seasons.”

A young-at-heart older gentleman in his early seventies, Bob has a mind like a trap when it comes to business. This is auspicious because he also sports the cap of “Business Broker Bob,” which involves him helping people to buy and sell businesses. Sad to relate, however, it would not be inappropriate to refer to him as “Electronics and Computer Challenged Bob.” I cannot tell you how many times I’ve received a plaintive weekend plea from Bob asking why his computer or camera or smartphone or some other piece of electronic equipment has stopped working. Fortunately, decades of being sneered at by IT veterans, coupled with the fact I used to watch The IT Crowd, now pays dividends — “Have you tried turning it off and on again?” I ask with my fingers crossed for luck (I challenge you to watch this video snippet about tech support without at least one wry grin flitting its fleeting way across your face).

Just this past weekend, for example, whilst basking in the relaxing glow of a Father’s Day feast, I received a call from “Walmart Bob” asking what sort of cable was required to connect his girlfriend’s old Android smartphone to her new car because the USB-C to USB-C cable that the spotty youth behind the counter had sold them didn’t seem to fit.

“Arrggggh!” I thought to myself (and I meant it most sincerely).

Unfortunately, I’ve come to realize that when I respond, “Look for a box that says, ‘USB-A to USB-Micro’ cable,” as far as Bob is concerned it sounds like I’m speaking in tongues. Finally, after yet another Sunday afternoon of tautological technological miscommunications on the telephone, I decided to throw a quick guide together, which I presented to Bob the following morning when he arrived at the office. It was only when I saw a little tear of joy roll down his cheek and a beaming smile of comprehension light up his face that I realized this might be a topic worth sharing because it could be of use to others. Not to you of course, but perchance to someone you know, so here we go…

In the not-so-distant past, electronic equipment manufacturers used a bunch of different cables and connectors to allow things like computers and printers to communicate with each other. Names like “RS-232” and “Centronics Interface” will raise a wry smile for many older readers.

As an aside, the fabulous folks at PRR Computers have created a rather useful Ultimate Chart of Computer Connectors and Ports. You can order a glossy 24” x 36” poster version for $15.49 plus shipping (I’d love to know how this particular price originated; is there some hidden meaning in the 1-5-4-9 sequence of digits?), or you can download JPG, PNG, and TIFF images for free. 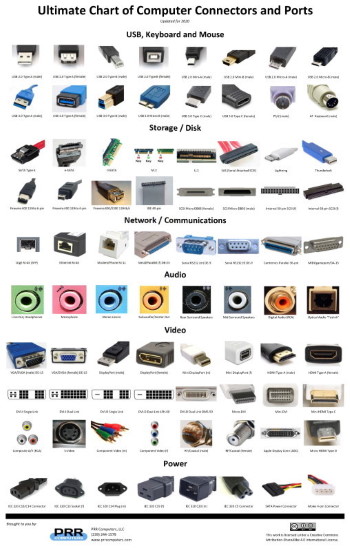 USB brings all sorts of cool things to the party, including the fact that it’s “hot pluggable,” which means you can connect/disconnect USB devices to/from your computer without having to first power the machine down. Also, if you are using a USB device for the first time, it either employs a standard driver, or it loads its driver onto your computer itself, or it locates an appropriate driver on the internet and downloads and installs the little rascal without you having to lift a finger. 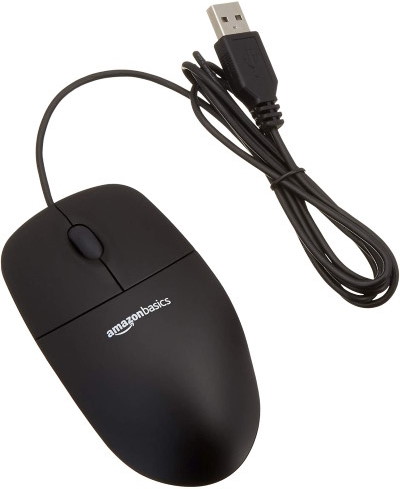 USB mouse with USB-A connector on the end of the cable
(Image source: Amazon)

Following USB’s initial launch, a bunch of USB-powered devices appeared on the scene. Some were primarily of novelty value, like personal cooling fans and keyboard vacuums; others were game-changing, like USB flash drives (“memory sticks”), which first entered the market circa 2000.

The data transfer rates that could be achieved using the initial flavors of USB, now known as USB 1.x were reasonably good by the standards of the 1990s, but they quickly began to run out of steam as users desired to transfer more and more data. The significantly faster USB 2.0 specification was released circa 2000. This used the same physical connectors as USB 1.x.

One of the problems with all of the original USB connectors — A, B, Mini, Micro — is that they are polarized, which means you can plug them in only one way. I don’t know about you, but it seems that whenever I first try to plug something like a USB mouse into a computer, I almost invariably have the USB-A connector upside down. If I just closed my eyes, random chance would suggest a 50:50 probability, so why is it that even with my eyes open I only seem to get it right one out of ten times?

In 2012, Apple introduced its Lightning connector to replace the 30-pin dock connector on its mobile devices (iPods, iPads, iPhones). In addition to its small size, one of the great things about the Lightning connector is that it’s non-polarized, which means you can connect it either way.

Meanwhile, the USB folks continued to beaver away in the background, resulting in the introduction of USB-C (a.k.a. USB C or USB Type-C) in 2014. In addition to supporting higher power distribution and the same high-speed communications as USB 3.x, USB-C connectors are also non-polarized.

The way things are going, USB-C will soon rule the world (at least until the “next big thing” comes along). At the time of this writing, for example, the vast majority of Apple’s mobile devices use Lightning connectors, but some of the most recent products employ USB-C connectors. Similarly, as I pen these words, the majority of Android devices employ USB-Micro connectors, but some of the more modern products feature USB-C connectors.

On Father’s Day this past weekend, my wife (Gina the Gorgeous) gifted me with an Ontel Arctic Air Neck Fan to keep me cool while I’m mowing the yard. (I used it yesterday evening. This wouldn’t win a prize for silent running but — since I was also wearing my hearing protection noise reducing earmuffs — I forgot I had it on. I remember thinking “Thank goodness there’s a cool breeze,” whilst I was mowing. It was only when I finished and removed my earmuffs that I realized the “cool breeze” was coming from my neck fan.) The point here is that, until relatively recently, the charging port on this sort of device would typically have been of type USB-Mini or USB-Micro. In this case, it was a USB-C port, and the neck fan came supplied with a short USB-A to USB-C cable for charging purposes.

Now, for the more technical members amongst us, before you leap into commenting combat with gusto and abandon, I know that we’ve only scratched the surface of this topic. For example, we haven’t talked about Mini-A vs. Mini-B or Micro-A vs. Micro-B, and Mini/Micro-B vs. AB connectors, or the concept of On-The Go (OTG), or the fact that USB 3.0 Type-B and USB 3.0 Micro-B connectors are different to their USB 2.0 counterparts, but (and I can’t believe I’m actually saying this) I didn’t want to wander off into the weeds.

My goal in penning this piece was to cover the common connector combinations that the average Bob or Boberta will typically run across in their day-to-day meanderings, thereby making them just a little more confident and/or dangerous. Bearing this in mind, how well did I do? Do you think there’s anything I covered in too much or too little detail, anything I included that I should have excluded, or anything I omitted that should have been added?

POSTSCRIPT: Literally seconds ago whilst I was giving this column one final read-through before sending it off to be posted, Bob (“Do you remember Bob? This is a story about Bob,” as Arlo Guthrie might have warbled) appeared in my office with a wide-eyed stare brandishing a nose hair trimming device and an AA battery that he’d purchased on his way into work. At first, I feared that Bob wished to engage me in some esoteric form of nose hair trimming combat, but he quickly gave me to understand that the task of inserting the battery into the device had brought him to his knees. Happily (since I have a reputation to maintain), it took only a few seconds for me to deduce and defeat the locking mechanism, thereby causing the battery compartment to appear. All I can say is that, from the expression of enchantment, wonderment, awe, and delight on Bob’s face, you would have thought I’d performed a magic trick equal to Shin Lim on Penn and Teller (I can finally reassure my dear old mother that the years at university studying for my degree in engineering were not spent in vain).