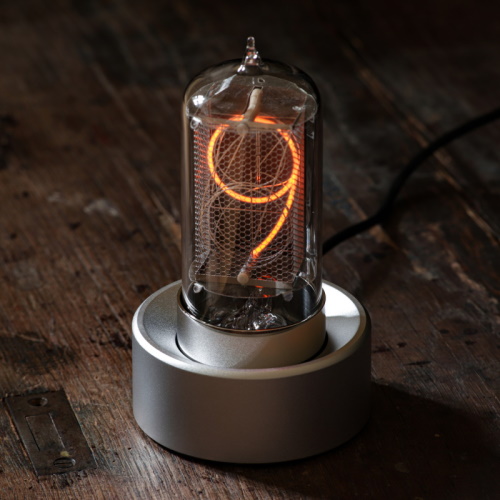 From one perspective, I’m not very good in an argument because I can usually see both points of view. Oftentimes, if the argument is between two other persons, I can introduce a third way of looking at things that really gums up the works. Contrariwise, from another viewpoint, I can be great in an argument because—since I can usually find something with which I can empathize on each side of the disagreement—I can happily dispute from either position.

I’m much the same way with technology. On the one hand, I love our modern spiffy and shiny futuristic gadgets and gizmos. On the other hand, I long for the retro look and feel associated with the technologies of yesteryear, especially if they have a hint of a sniff of a whiff of the steampunk genre about them. I especially enjoy the retro-futuristic-steampunk look found in movies like Blade Runner and TV series like Cowboy Bebop.

I also really enjoy classic architectures as exemplified on TV series like Downton Abbey, The Gilded Age, and Hotel Portofino. Having said this, I must admit that there are a lot of modern buildings that I find pleasing to the eye, although some—like the Pompidou Center in Paris—make your eyes water the first time you see them (my eyes are still watering). And then there are conceptions and constructions that make you want to fall to your knees, look up at the heavens, and cry, “Why Lord, why?” (I was 100% behind Prince Charles in 1984 when he famously described a proposed National Gallery extension as a “monstrous carbuncle.”)

I’m not saying that everything in the past was perfect, but there are many cases where I am blown away by our forebears’ sense of style (which, of course, makes me think of the song Style as performed by Frank Sinatra, Dean Martin, and Bing Crosby). For example, cast your orbs over the photo below showing the main control room of an abandoned power plant in Hungary, and then tell me if you know of any modern industrial equivalent that can compete in terms of elegance and panache. 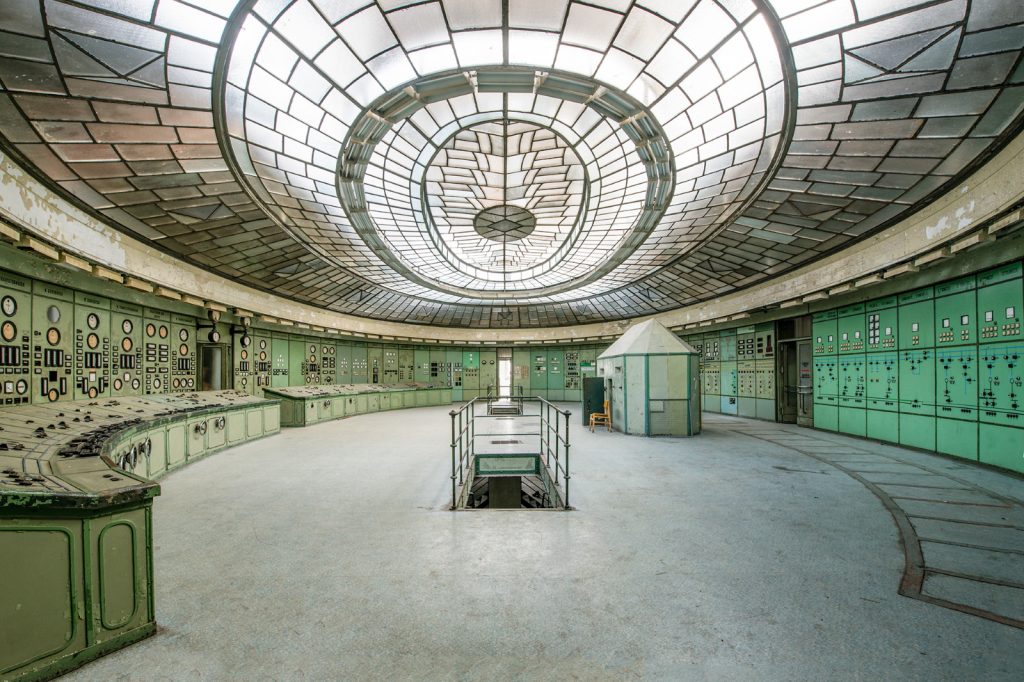 As an aside, the term “urban exploration” (urbex or UE) refers to the exploration of manmade structures, usually abandoned ruins or hidden components of the manmade environment. One of my urbex heroes is André Joosse, who kindly gave me permission to use the above image. If you want to lose the next few days of your life, you should visit André’s www.urbex.nl website.

One of the retro technologies I really like is that of Nixie tubes, which were introduced to the market circa 1955. Although these appear similar to vacuum tubes, they are in fact filled with a gas at low pressure, usually neon with a little mercury or argon, in what is known as a Penning mixture. The tube contains an anode in the form of a wire-mesh “cage” along with multiple cathode filaments shaped like numerals or other symbols. Consider the following photo of the Bombe clock, which was created by my friend Paul Parry, who is the owner of Bad Dog Designs. 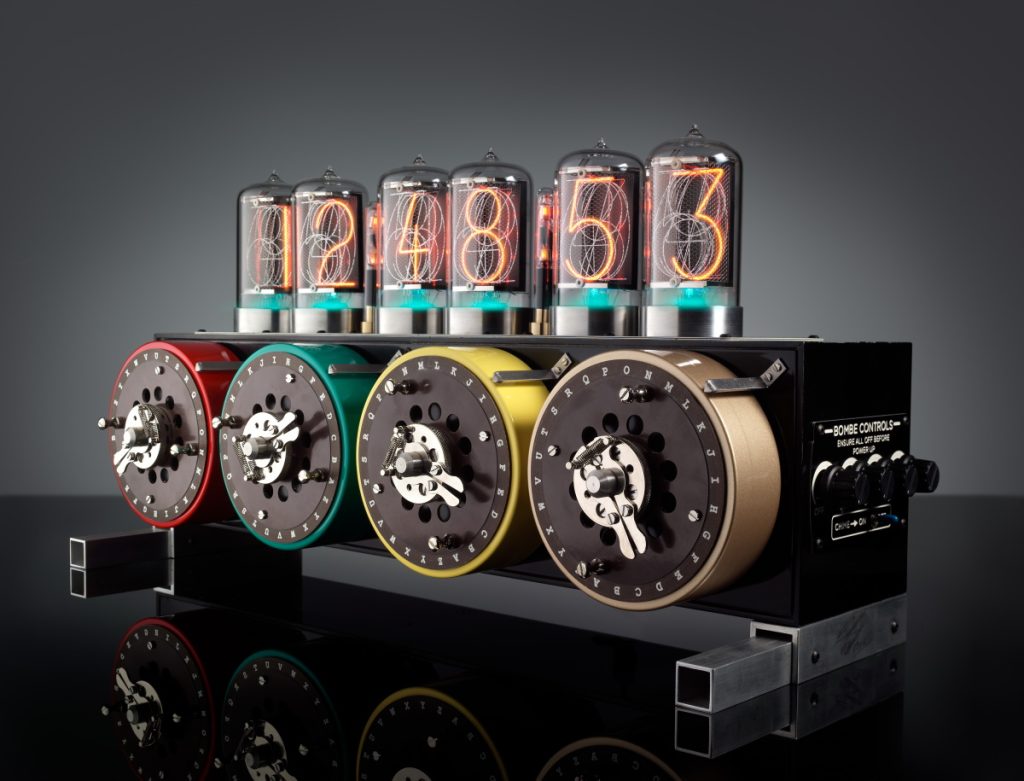 This bodacious beauty was inspired by Alan Turing’s Bombe, which helped British cryptologists decipher German Enigma-machine-encrypted secret messages during World War II. Observe the six Nixie tubes mounted on top of the Bombe. These tubes are about 2” wide and 4” tall, which is reasonably large in the scheme of things (even in their heyday, most Nixie tubes were much smaller; the popular 1N-14, for example, was only around 0.75” wide and 1.5” tall). When a voltage of about 170V is applied to one of the cathodes, that filament is surrounded by an orange glow discharge with an effect that is very pleasing to the eye.

The use of Nixie tubes peaked in the 1960s and 1970s, but they continued to be used throughout the 1980s. Until recently, it would have been said that the last such tube was made in the early 1990s; also, that the only way to lay your hands on Nixie tubes these days is to reclaim them from old test and measurement equipment, or to purchase them in the form of new old stock (NOS), which refers to aged stock of merchandise that was never sold to a customer and is therefore still new in its original packaging. In the case of Nixie tubes, countless units created in Eastern European countries or in the Soviet Union as was (sorry Mr. Putin) have sat gathering dust in warehouses for decades. However, dissatisfaction with the aesthetics of modern digital displays and a nostalgic fondness for the styling of obsolete technology has driven a resurgence of interest in Nixie tubes, especially for use in things like clocks.

The reason for my use of the “until recently” qualifier in the previous paragraph is that my friend Dalibor Farny, who hails from the Czech Republic, first ran across Nixie tubes in 2011. Dalibor became so enamored by these devices that he set out to discover everything he could about their construction, and he subsequently ended up establishing a small factory where he now handcrafts his R|Z568M tubes (amongst other things). These R|Z568M tubes are pin-compatible resurrections (hence the ‘R’) of the classic Z568M tubes, which are, in-turn, considered by many to be the most beautiful representatives of the Nixie tube family.

The tubes shown on Paul Parry’s Bombe clock are R|Z568Ms created by Dalibor. I have six of Dalibor’s R|Z568M tubes of my own in my office as shown in the photo below. The electronics (the board under the tubes) were designed and created by my chum Pete, who is the owner of PV Electronics. 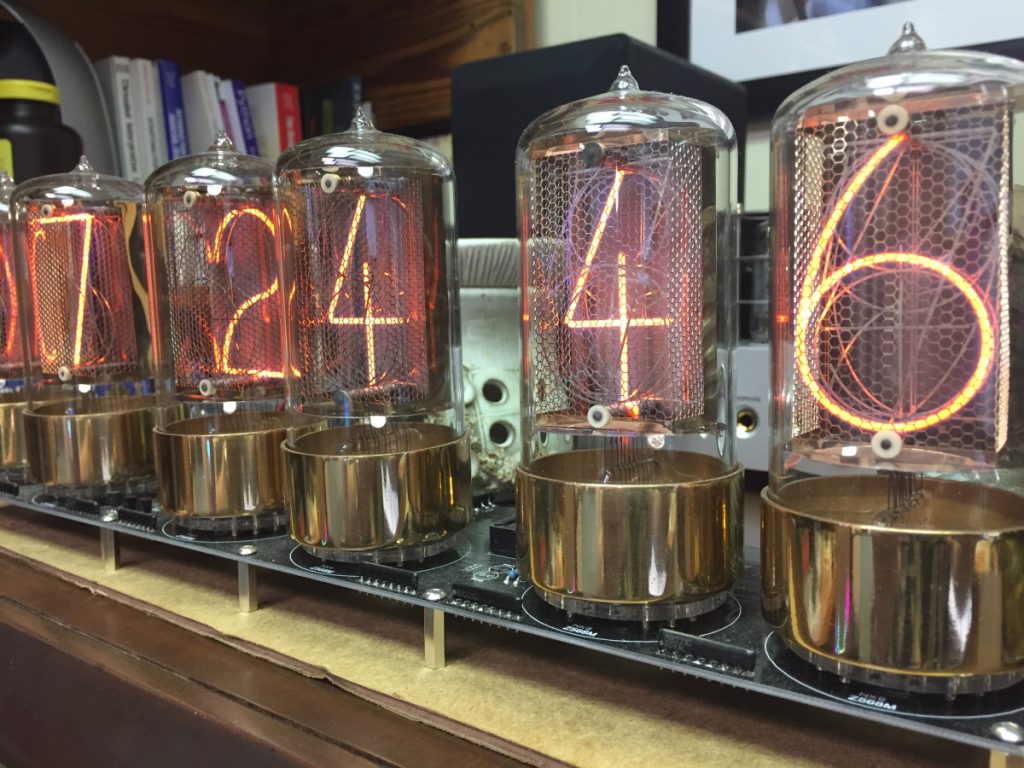 Do you notice anything special about my tubes? Yes, you are correct, they do indeed have copper anodes and bronze bases. Well spotted. In fact, these comprise one of only two such sets of steampunk tubes in the world. (My mom used to say I was special—I foolishly took it as a complement—but it turns out she was right; I am special!)

Whenever I visit my dear old mother in England, on the last Friday before I return, a herd of techno-geeks flocks from all over the UK to congregate at my brother’s house. We spend the day displaying our latest and greatest creations with my mother providing appropriate “Ooh” and “Aah” sound effects as required. At our gathering in the spring of 2019, before the dark (coronavirus) times fell upon us, in addition to Paul, Pete, and a sprocket (which should be the collective noun for a group of engineers) of other luminaries, Dalibor and his wife flew over from the Check Republic to join our merry throng. 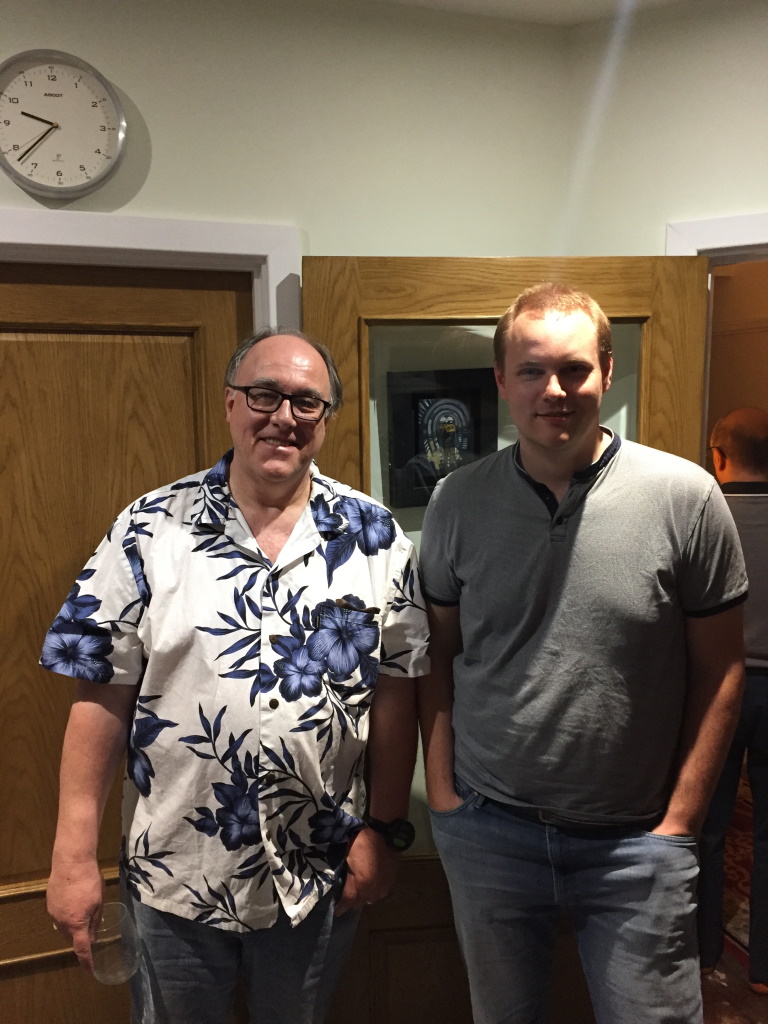 Dalibor and yours truly at my brother’s house (I’m the good-looking one on the left)
(Image source: Max Maxfield)

But wait, there’s more… One of my hobby projects is to build a 4-bit computer using a mixture of implementation technologies (relays, vacuum tubes, transistors, and jellybean ICs, along with magnetic, pneumatic, and hydraulic logic). I’ve been working on this for several years now with my chum Joe Farr, who lives in an idyllic village just outside of London, and who was also present at the aforementioned geek-and-nerd fest at my brother’s house.

More recently, Joe and I were joined on our quest by Nils van den Heuvel, who hails from the Netherlands. Nils is hard at work creating a gate-and-register-level implementation of our 4-bit computer in an FPGA. A couple of weeks ago, Nils and his son came to America for a father-son road trip. As part of this, they visited me in Huntsville, Alabama, and we all went to the US Space and Rocket Center. 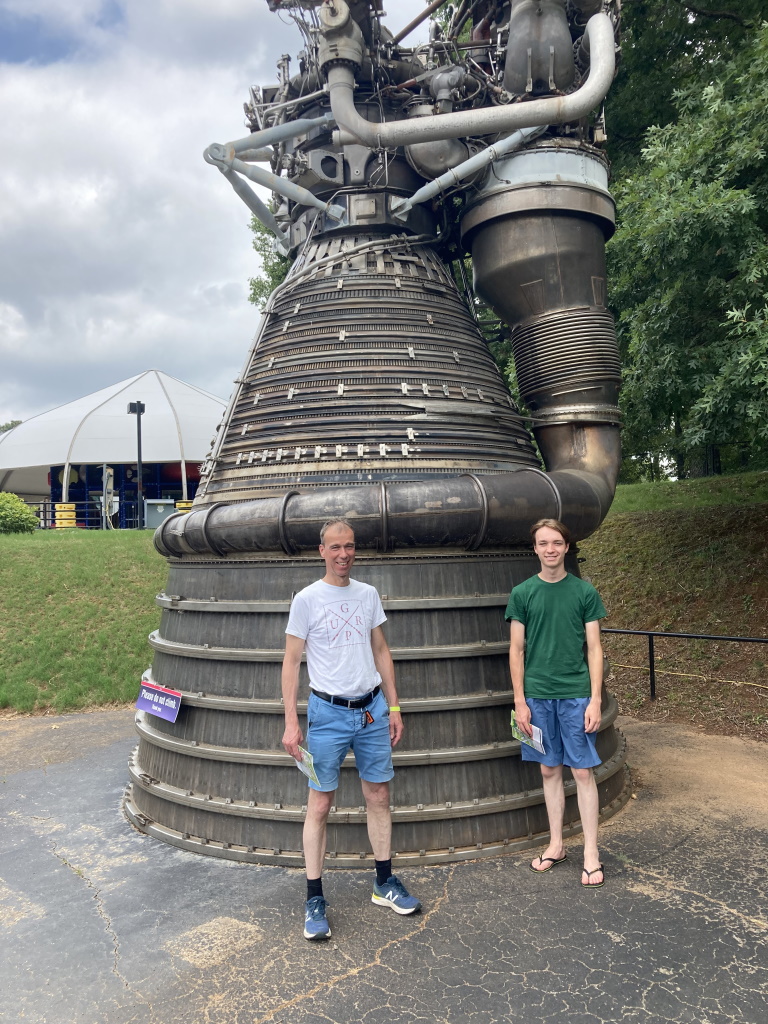 The reason I mention this here is that Nils and his son (who wishes to remain nameless) also visited my office. Out of all of the flashing lights and special effects, the technology that captivated their attention the most was Dalibor’s steampunk Nixie tubes.

As I’ve mentioned in previous columns (the real trick is to get me to stop mentioning it), I’m scheduled to give the keynote presentation at the FPGA Forum in Norway on the 7th of September 2022. The day before, I’ll be giving a guest lecture at the Norwegian University of Science and Technology (NTNU). One of the things I’m going to discuss in my NTNU presentation is the topic of “Change.” As part of this, I’m going to talk about how much technology has changed in my lifetime. And, as part of this, I’m going to show the students modern incarnations of various display technologies from yesteryear.

Not surprisingly, one of the technologies I wish to demonstrate is that of Nixie tubes, but the chances of me taking my own precious steampunk tubes on a jaunt around the world is close to zero. A few weeks ago, I emailed Dalibor to tell him what I was doing and to ask if he had a defunct tube laying around that I could carry with me so the students could pass it around and at least get a feel (no pun intended) for what I was talking about.

I have to say that Dalibor shocked me by refusing to even contemplate this. Instead, he said he was immediately shipping me one of his single digit BLUB Nixie tube clocks featuring one of his classic R|Z568M tubes. 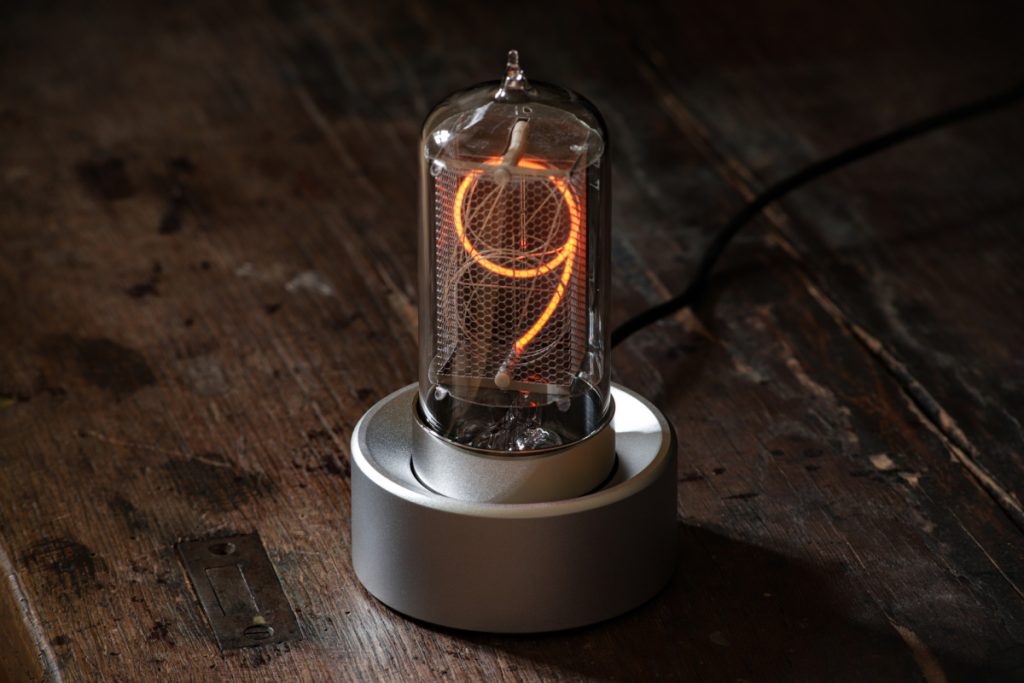 I think this is going to blow the students away, and you can bet your little cotton socks that this little beauty will be accompanying me to every conference I attend in the future.

I’ve said it before and I’ll say it again—it’s not what you know, it’s who you know, and I know a bunch of amazing people, including Dalibor. On the other hand, it’s also the case that they know me now that I come to think about it. Upon consideration, however, I’m pretty sure that I’m getting the best of the deal.

We will continue our discussions on the topic of retro-futuristic-steampunk technologies in a future column. In the meantime, are there any such technologies that have tickled your fancy and that you’d care to share with the rest of us?