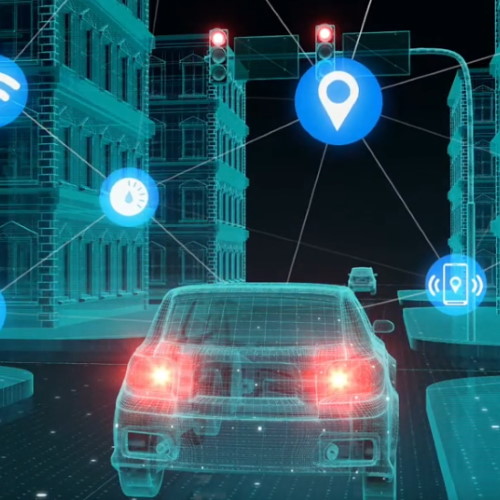 NOR Flash is Sexy Again!

I was just chatting with the chaps and chapesses at Macronix, which is a leading integrated device manufacturer in the non-volatile memory (NVM) market, providing a full range of NOR Flash, NAND Flash, and ROM products.

For reasons that will (or may, or may not) become apparent, our conversation reminded me of the French astrologer, physician and reputed seer, Michel de Nostredame (1503-1566), whose name is usually Latinized as Nostradamus. This little scamp wrote an almanac for 1550. By some strange quirk of fate (some may say “random chance”), certain of the predictions in this yearbook proved to be accurate. As a result of this success, in 1555, Nostradamus ended up writing his book Les Prophéties, which is a collection of 942 poetic quatrains that allegedly predict future events. These predictions were written using an esoteric combination of French, Greek, Latin, and Occitan (don’t ask). In addition to awkward anagrams, mythological mentions, and astrological allusions, these prognostications are presented in a subjective language that makes comprehension difficult. Just to add to the fun and frivolity, presumably on the basis that he didn’t want to make things too easy, Nostradamus’s predictions “fail to follow chronological coherence,” as one might say. The funny thing is that, over time, Nostradamus has attracted many supporters who credit him with having accurately predicted major world events. The really funny thing is that these devotees work things out only after the event in question has taken place, retrofitting the prediction onto the occasion, as it were. I don’t wish to boast (I pride myself on my humility), but even I can predict something after it’s happened, and I’ve not undergone any formal training for this at all.

In turn, thinking of Nostradamus called to mind the book Good Omens by Neil Gaiman and Terry Pratchett (I also enjoyed the TV series, which is available on Amazon Prime). Predominantly set around our own time, there are a number of subplots to this book, starting with the birth of the son of Satan and the coming of the End Times. We also have an angel called Aziraphale and a demon called Crowley who have lived on Earth since its creation. Over the millennia, Aziraphale and Crowley have become friends and developed a liking for humanity, so they set out to prevent the coming of the Antichrist and the initiation of Armageddon (the final battle between Heaven and Hell). And then we have a book of prophecies published in 1655 by a witch called Agnes Nutter, who was anything but. Only one copy of this book remains in existence, and this tome is in the hands of a girl called Anathema Device, who is Agnes’s only remaining descendant. The revelations in the book describe in detail everything that is going to happen for the next 350 years, culminating in Armageddon. The only problem is that these predictions were written based on visions of a future as seen by someone who didn’t fully understand what she was looking at and didn’t have the words to describe the things she was seeing (not unlike many of the managers I’ve had the joy of working under). Amazingly, considering that Good Omens features the son of Satan, the four horsemen of the apocalypse (well, three horsemen and one horsewoman, as it turns out), and the End Times, this is quite a cheerful book that leaves you with the comforting feeling that things turn out for the best in the end.

Why am I waffling on about real people like Nostradamus, fictitious characters like Agnes Nutter, and their predictions for the future? Well, I’m glad you asked. I was fortunate to be around at the introduction of the early 8-bit microprocessors in the 1970s. At that time, I counted these little beauties as some of the most amazing things I’d ever seen. As the years went by, more powerful processors of the 16-bit and 32-bit persuasion made their debut, prompting industry pundits to predict the demise of the 8-bit machines (I’m surprised that Nostradamus didn’t have anything to say on this subject). Almost since their inception (remember that the 16-bit 8086 was released in 1978), I cannot recall how many times I’ve seen articles proclaiming “the end is nigh” for 8-bit micros, only to watch them keep on happily chugging away (see also 8-Bit Isn’t Dying, It’s Growing).

Similarly, I remember the days circa the 1980s when digital signal processing (DSP) techniques — which had been simmering since Claude Shannon wrote his A Mathematical Theory of Communication article in 1948, and which had been fermenting throughout the 1960s and 1970s — really began to take off. In particular, I recall hearing pundits pugnaciously predicting the death of analog electronics, which caused a generation of students to turn their attentions to the digital domain. In turn, this led to a drastic shortage of wibbly-wobbly analog expertise, which was embarrassing because analog continues to play such a key part in everything we do. (For more on DSP history, see Steve Leibson’s articles from earlier this week: A Brief History of the Single-Chip DSP, Part I, and A Brief History of the Single-Chip DSP, Part II.)

All of which leads us back to the guys and gals at Macronix. As we noted earlier, these little rascals are firmly focused on the non-volatile memory (NVM) market, providing a full range of NOR Flash, NAND Flash, and ROM products.

The NAND and NOR forms of Flash each have their own advantages, disadvantages, and preferred application arenas. In particular, NAND Flash finds favor in bulk data storage deployments, whilst NOR Flash shines when it comes to code storage and execution tasks. Of course, bulk storage is huge, which explains why the NAND market is approximately 20x the dollar amount of the NOR market.

In 2000, the global NOR market was around $5 billion. By 2010, this market had fallen to around $2 billion, causing industry pundits to … you guessed it … start proclaiming “NOR Flash is going to die.” Not surprisingly, based on their belief in these predictions, some of the players started to exit the NOR Flash market, which was unfortunate (for them) as this turned out to be the bottom of a U-shaped curve. Today’s NOR Flash market is experiencing a boisterous CAGR of around 15%, which is anticipated to last until 2025 and beyond. 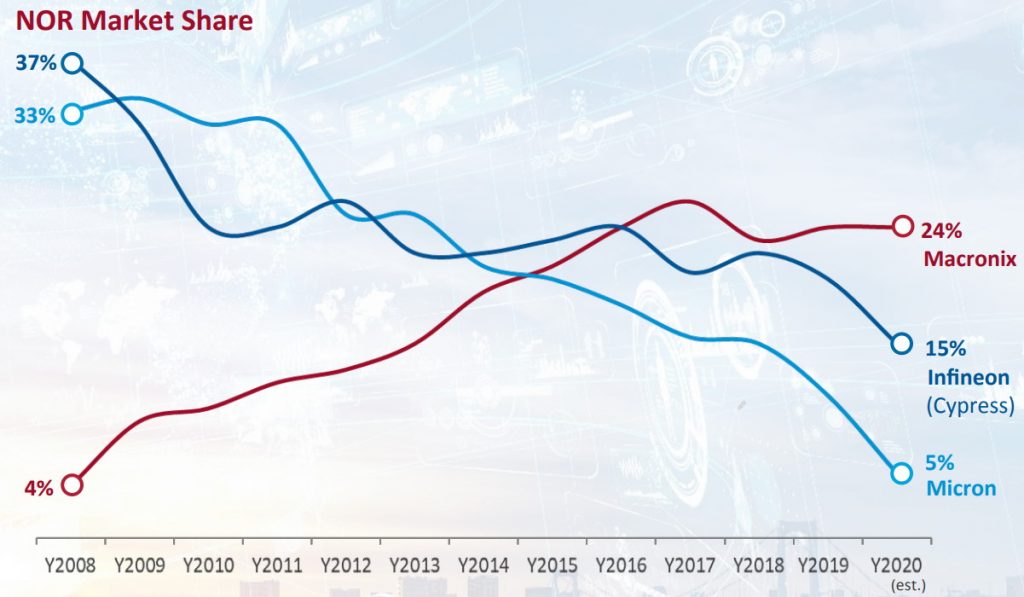 I have to agree with them, because Macronix memories are being embraced across the board (no pun intended), from communication, computing, and consumer to industrial and automotive. In the case of 5G, for example, 80% of telecom infrastructure providers are adopting memory from Macronix.

Similarly, when it comes to automotive applications, both NOR and NAND Flash devices from Macronix are found in advanced driver assistance systems (ADAS), infotainment / telematics, and cluster / instrumentation applications. Furthermore, Macronix NOR Flash is also to be found in powertrain systems. At their current rate of adoption, the folks at Macronix say that they expect to be the number one player in the NOR Flash automotive market by 2023.

Of particular interest in these days of pandemic-induced silicon chip shortages is the fact that Macronix performs all of its wafer manufacturing in-house with its own 200 mm and 300 mm fabs.

To be honest, it’s easy to take some technologies for granted, and I don’t tend to think about semiconductor memories as much as perhaps I should. Suffice it to say that my chat with the folks at Macronix has given me a whole new appreciation for the wonders of NOR Flash. It’s true, NOR Flash is sexy again!