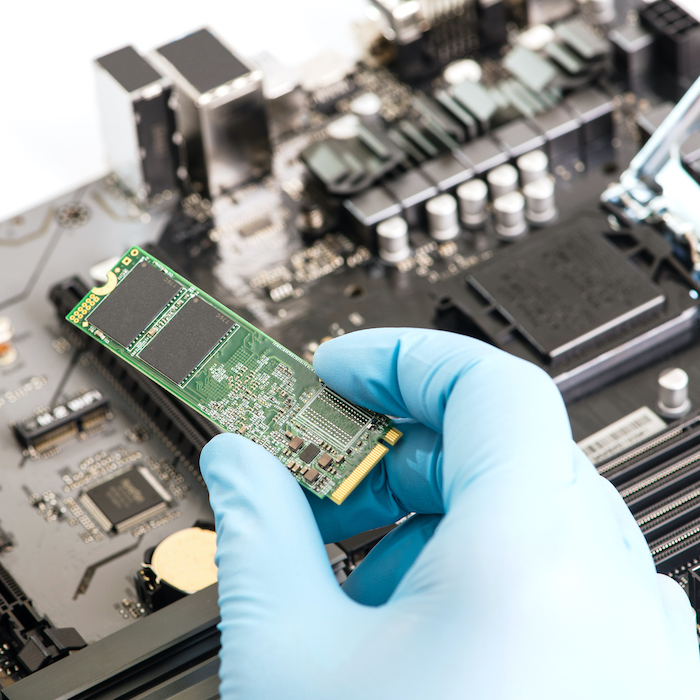 There are a lot of ways to do nonvolatile memory. I mean, a lot of ways. There’s flash memory, of course, but also magneto-resistive memory, phase-change memories, resistive RAM, ROMs, PROMs, EPROMs, EEPROMs, ferroelectric memories, holographic memories, battery-backed SRAM, spinning hard disks, floppy disks, knots on a piece of string… You get the idea.

Very few of these interesting and innovative technologies ever succeed in the market. The high failure rate isn’t because the technologies don’t work. It’s because the NVM (nonvolatile memory) market requires slavish obedience to strict edicts which shall not be violated. First, that your memory must be cheaper than the alternatives. Specifications don’t matter; cost matters. And second, that if you’re trying to use NVM alongside main memory, it must be a lot faster than flash. Violate either of those and you’re a niche product, at best. Violate them both and you’re a trivia question at the local nerd bar.

That doesn’t stop companies from trying, though. Even big companies. Really big companies, like Intel or Micron. Even Intel and Micron. Working together, the two powerhouses from opposite sides of the Sierra Nevada mountains created something called 3D XPoint memory, yet another new NVM that was designed to create a new memory layer between DRAM and mass storage.

Except it didn’t. Now Micron is bowing out of the marriage, selling its fab, and writing off billions of dollars of accumulated losses, all just eight years after their partnership began. It’s been an expensive, but educational, endeavor. Intel will now go it alone with 3D XPoint memory, although with its new CEO Pat Gelsinger at the helm, even that is up in the air.

It all started out so promisingly, too. Most partnerships do. Intel wanted flash memories to be (a) faster and (b) easier to use on PC motherboards. “Back around 2004, Intel and Micron wanted to get into the NAND flash market,” says Jim Handy, nonvolatile-memory analyst and all-around good guy. “NAND flash memories didn’t have standard interfaces, so each system had to be designed for a specific vendor’s chips.” Intel pushed its own standard for NAND flash, which Hynix and Micron adopted, “but they were small fry.” The bigger players, like Toshiba and Samsung, weren’t interested and continued to go their own way.

Intel and Micron formed a joint venture called IM Flash Technology (get it?), split the cost of building a dedicated fab in Utah, and jumped into the NAND flash market. That venture expanded to encompass a new type of storage cell based on phase-change technology that they dubbed 3D XPoint (“crosspoint”). The plan was to sell memory DIMMs and SSDs made from 3D XPoint chips, but not the chips themselves. The first announcement came in 2015, and the first shipments in 2017. Intel branded its products Optane, while Micron called theirs QuantX, but they were virtually the same either way.

The spec sheets were great. Optane/QuantX was to be a whopping 1000× faster than flash, cheaper than DRAM (two important criteria), and tolerate more read/write cycles than flash. To kickstart production, the first products were sold as SSDs (solid state disks). But early reviewers weren’t impressed. Yes, the Optane-based SSDs were faster than normal NAND-based SSDs, but not by the promised huge margins. And they were really expensive. Overall, not a great out-of-box experience, and Optane was off to a bad start.

In hindsight, the standard SSD interface was to blame. The underlying memory technology was indeed fast, but the interface masked Optane’s benefits. “Even with hypothetical zero-latency memory, an SSD with an NVMe interface is only about 6× faster than a conventional NVMe flash SSD,” says Handy.

Over on the motherboard side, things weren’t going well, either. Intel’s intention was to integrate an Optane interface directly onto its processors, much the way DRAM interfaces appear now. You’d have Optane DIMMs alongside your commodity DRAM DIMMs. That would make Optane a must-have feature (literally) on certain Intel-based systems. Not coincidentally, it also locked out AMD and other chipmakers, because the unique DDRT interface was proprietary to Intel. Even Micron couldn’t make compatible DIMMs.

In practice, Intel was late to its own market. On-chip support for Optane memory didn’t appear on Xeon processors until two full generations later than Intel had intended. And the Optane DIMMs themselves weren’t available until early in 2019. The delays didn’t help with market acceptance. And the price was a problem. Optane memory was still too expensive. See Rule One.

The economics were looking bleak for both companies. Intel was hemorrhaging about $500 million in Optane-related expenses every quarter; Micron was losing about $150 million per quarter. Anyone looking at the companies’ financials could see that 3D XPoint technology was a drain on their balance sheets with no upside in sight. Short-term losses for R&D are one thing; pouring money down a 3D XPoint hole is another.

In January of this year, Intel abruptly killed off all of its Optane SSDs for consumer desktop and laptop applications, effective immediately (server customers can still buy them). No warning was given and no replacements were planned. The optics weren’t good.

Micron didn’t have the financial wherewithal to wait it out any longer. As innovative and exciting as 3D XPoint memory may be to the enthusiast, it didn’t make economic sense. Driving the price down requires driving the volumes up, and Optane/QuantX shipments just weren’t ramping the way either company had hoped. And even if the technology had caught on, Micron was locked out of the motherboard DIMM market on account of Optane’s proprietary interface. Time to bail. “Micron must be thinking, ‘If Intel can’t make money at this, what hope do we have?’”, says Handy.

As it stands, Micron’s fab in Utah is the sole source of production-quantity 3D XPoint memories, and Micron wants to sell the facility to recoup some of its losses. That will eventually leave Intel with no source of supply, but the situation isn’t too dire. For starters, Micron has guaranteed to supply Intel for “the next several quarters,” so there’s no rush. Also, Intel has its own fab in New Mexico that could potentially be ramped up to make Optane chips.

That is, if Intel wants to stay the course. Only a few months ago, then-CEO Bob Swan made encouraging noises about Optane, and executive VP/GM Navin Shenoy called it a “disruptive, once-in-a-decade” invention. But Swan has vacated the big chair since then, and incoming CEO Pat Gelsinger may have other ideas.

None of this is good news for the Intel customers who actually do use Optane, either as memory DIMMs or as SSDs. They presumably like the product, which has no comparable replacement. Micron’s departure removes one leg of the two-legged stool, and Intel’s brusque cancelation of Optane SSDs doesn’t make it look any more stable. Any Intel-based system has always relied on a sole source of supply for the processor. Now it has a single supplier for the memory, too. How much perceived risk are system builders willing to take on in exchange for Optane’s performance benefits?

There are plenty of ways to design nonvolatile memory. But to sell them in any kind of volume, you have to adhere to the rules of NVM. Even the biggest players don’t get a free pass.

One thought on “Micron Bails, Intel Does Optane Alone”