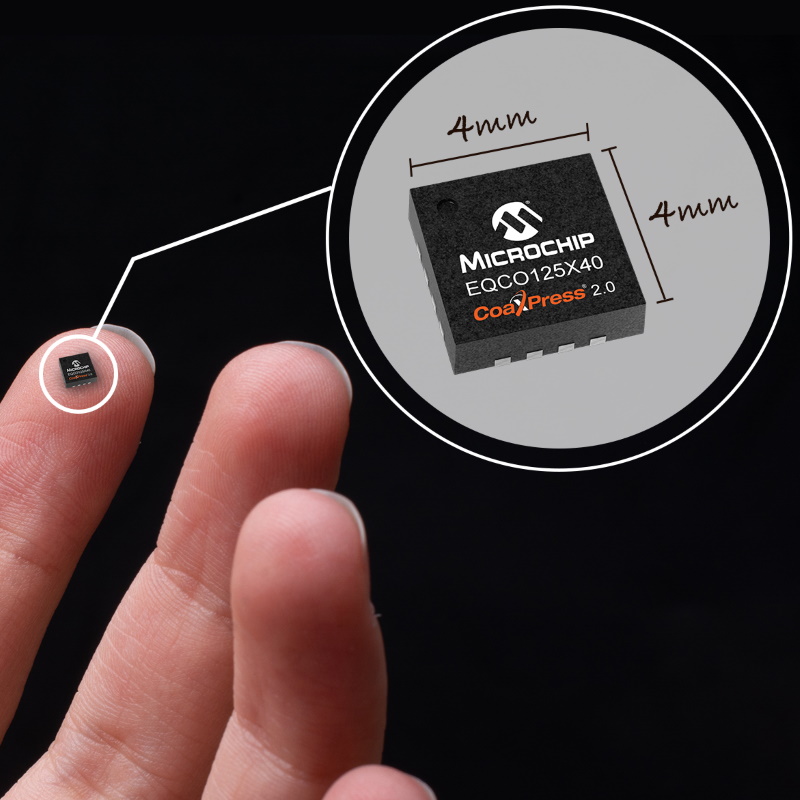 It’s funny how, when you keep on hearing stories about companies heading in one direction, the news that someone is going the other way makes you sit up and pay attention. It reminds me of that old saying: “‘Dog bites a man’ is not news; ‘Man bites a dog’ is news.”

In my case, for the past couple of years I’ve been talking with companies who have been explaining how everything is racing to the edge — security on the edge, computing on the edge, artificial intelligence (AI) on the edge, machine vision on the edge, and so forth. Generally speaking, they were talking about moving processing and decision making as close to the sensors and cameras as possible. (See also What the FAQ is the Edge vs. the Far Edge? and Bridging the OT-IT Divide.)

So, you can only imagine my surprise when I found myself chatting with the folks at Microchip Technology recently, only to hear how excited they were about their new CoaXPress 2.0 Devices that can transmit 4X the video data over 10X the cable distance as compared to the combination of the CoaXPress 1.x standards and their previous generation devices.

We are talking about serious amounts of data over serious distances here — like 100 gigabits per second (Gbps) or more over 100 meters or more. We’re also talking about things like 600 frames per second high-speed, high-resolution cameras monitoring conveyor belts carrying raw rice speeding by, coupled with machine vision systems boasting latencies low enough and response times high enough to be able to identify individual grains of undesirable rice and guide jets of air to blow them away as they zoom by.

Now, you probably know all about this, but I’m a bear of little brain and I’d never even heard the term CoaXPress before, so I had a quick Google while no one was looking and discovered a cornucopia of interesting tidbits of trivia and nuggets of knowledge.

First of all, the name CoaXPress (CXP) is a portmanteau of ‘express’ (as in express train) and ‘coaxial’ to emphasize CoaXPress is faster than other standards (e.g., Camera Link, or GigE Vision) and uses coaxial cables as the physical transmission medium.

The concept of CoaXPress was first demonstrated at VISION — an international trade fair for machine vision and identification technologies — in Stuttgart, Germany, in 2008. Shortly after this, the CoaXPress Consortium was established by Adimec, Eqcologic, Active Silicon, Aval Data, NED, and Components Express.

The initial CoaXPress standard soon saw adoption around the world. This royalty free standard is now hosted by multiple standards bodies with working groups made up of technical representatives from companies spanning the globe. It’s also supported by three top industry associations: JIIA, AIA, and EMVA.

Applications for CoaXPress include, but certainly aren’t limited to, the following:

Before we move on to look at Microchip’s solutions, I think the summary provided on the CoaXPress website gathers everything together nicely in a nutshell:

CoaXPress (CXP) is an asymmetric high-speed point to point serial communication standard for the transmission of video and still images, scalable over single or multiple coaxial cables. It has a high-speed downlink of up to 12.5 Gbps per cable for video, images, and data, plus a lower speed uplink up to 42 Mbps for communications and control. Power is also available over the cable (“Power-over-Coax”) and cable lengths of greater than 100m may be achieved.

Returning to the guys and gals at Microchip — these little scamps have just released a bunch of CoaXPress 2.0 devices. For the purpose of these discussions, we will focus on the EQCO125X40, which is a single-chip transceiver (transmitter and receiver) that supports video downlink speeds up to 12.5 Gbps and control uplink speeds up to 40 Mbps.

In addition to satisfying the core CoaXPress 2.0 specification, Microchip has gone “above and beyond” by adding a bunch of additional features, including the following:

All of these integrated features increase reliability and improve the robustness of the system while reducing bill of materials (BOM) costs and minimizing risk. Take the integrated signal link integrity, for example. If you have a camera on the end of a robot arm, where that arm is constantly flexing, the flexing may cause the video signal characteristics to degrade over time. Having an integrated signal link integrity capability allows the system to constantly verify the quality of the video stream and alert operators when it’s time to replace the cables.

To be honest, I hadn’t really thought about how these vision systems were powered, but the fact that the CoaXPress specification includes Power-over-Coax (PoC) — that is, supplying power over the coaxial cable to the remote camera — answers all the questions I never had. Of course, you still want all of your components to consume as little power as possible, so the fact that the EQCO125X40 consumes only 100 mW while running at 12.5 Gbps is good news for all concerned.

Taking all of these capabilities into account, I was envisaging a reasonably substantial device, so I was pleasantly surprised to discover that the EQCO125X40 is a teeny-tiny component that’s presented in a 4 mm x 4 mm package. 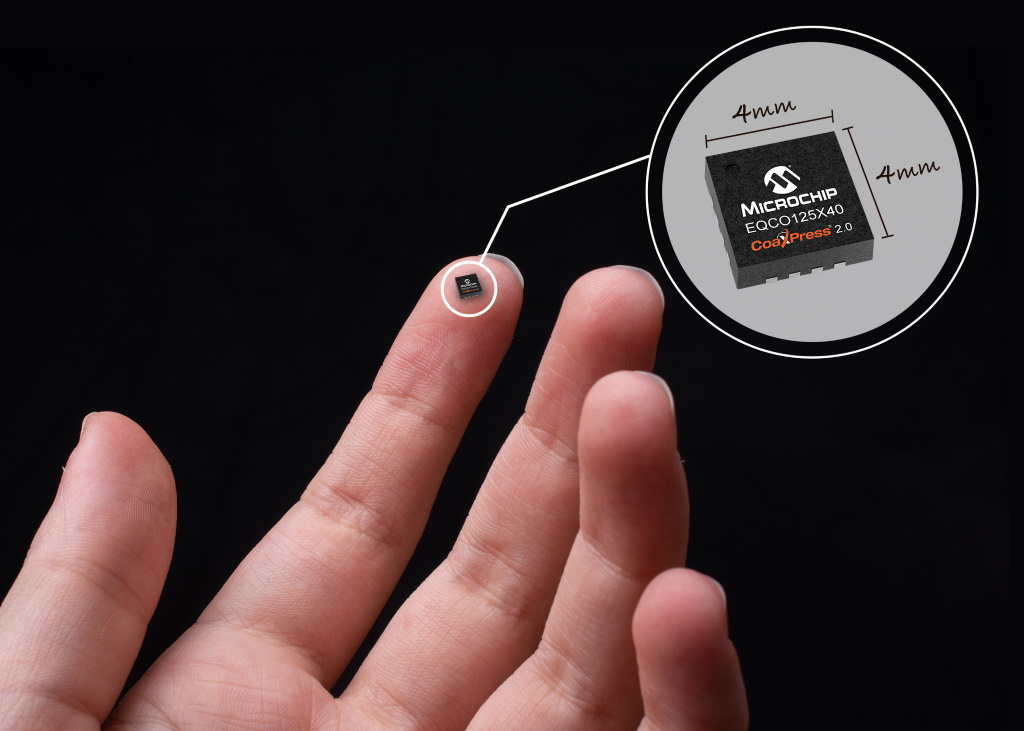 As noted earlier, the EQCO125X40 supports video downlink speeds up to 12.5 Gbps and control uplink speeds up to 40 Mbps, where the uplink allows control of things like telling the camera to zoom, pan, tilt, etc. A block diagram of the chip is shown below.

Furthermore, a typical connection diagram is shown below. Observe that this example employs two EQCO125X40 devices — one in the HD camera and the other in the frame grabber. This single channel can be used to convey 12.5 Gbps of video data. Additional channels, each with their own EQCO125X40 devices, can be added as required.

Also observe that the example above shows that the 12.5 Gbps signal can be conveyed over up to 40 m of coaxial cable. But what if we wish to send the signal over longer distances? Well, turn that frown upside down into a smile, because the chaps and chapesses at Microchip have us covered. The EQCO125X40 can be used as a cable repeater, where each repeater allows us to add another 35+ meters of coaxial cable. And, of course, these repeaters can operate on Power-over-Coax, meaning no external power source is required. 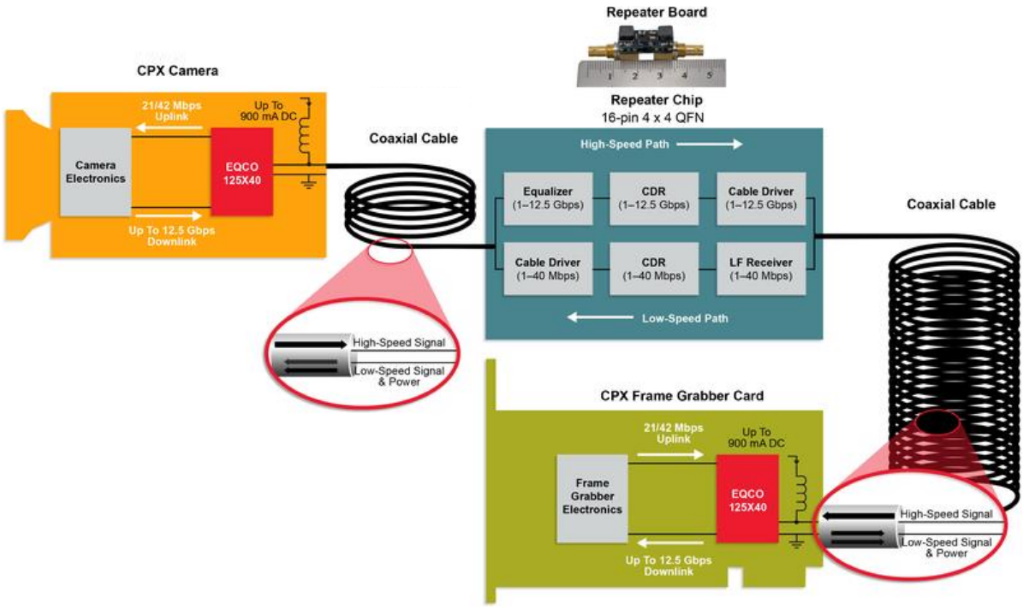 Using the EQCO125X40 as a repeater (Image source: Microchip) 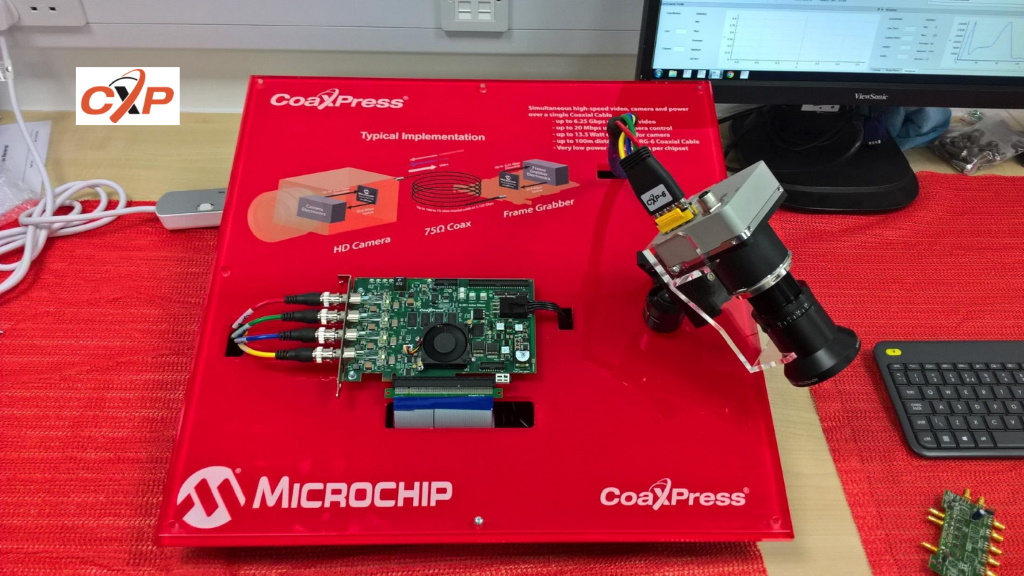 One thing the folks at Microchip were really keen on impressing on me is that they are a total system solution (TSS) — that is, they can provide an end-to-end CoaXPress 2.0 solution in the form of devices, data sheets, application notes, reference designs, and evaluation boards. In fact, they told me that, “We will even troubleshoot our customers’ boards for them for free,” which is very nice of them.

So, there we have it. Once again, I’ve learned something new, not least that fact that not everything is moving to the extreme edge of the internet. How about you? Was any of this new to you, or are you yawning to yourself and saying, “You are wasting your time Max — I already knew all of this”?