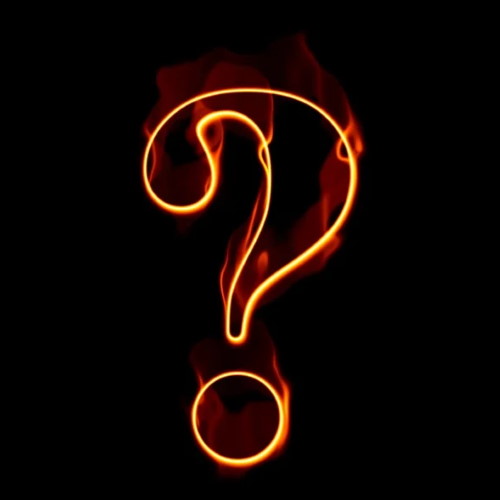 In recent columns (see Using USB4? Require ReTiming? Kandou Can-Do! and Just Call Me an Indexing Fool), I’ve made mention of the fact that I’m in the process of writing a book called Wroting Inglish: The Essential Guide to Writing English for Anyone Who Doesn’t Want to be Thought a Dingbat.

As I previously noted, the primary intent of this tome is to explain grammar and punctuation to engineers in a fun and interesting fashion. Did you ever read Eats, Shoots & Leaves: The Zero Tolerance Approach to Punctuation by Lynne Truss? Who would have guessed that this would become an international bestseller? I can but hope that when I eventually pass the finishing post (this is a back-burner hobby project), my own modest efforts will enjoy similar success.

The image I plan on using on the cover of Wroting Inglish features a supercilious wonder who thinks he knows it all (but he doesn’t) (Image source: Max Maxfield)

So, why did I decide to plunge into this particular odyssey, you may ask. Well, as I say in the book, in one of my past positions, when I was acting as the Editor-in-Chief for an online technical publication, I used to receive a humongous number of emails each day, along with a plethora of article submissions. You would not believe some of the things I saw, including spurious thoughts, run-on sentences, and hopelessly mixed tenses, all combined with the most graunching grammatical errors and problematic punctuation. In some cases, my correspondents may not have been native English speakers, but it was not uncommon to see eye-watering errors from folks in America, Australia, or even the home country itself.

I have engineer friends around the world, many of whom are brilliant on the technical front but who are let down by their writing skills. I cannot tell you how many of them appear unable to differentiate between “its” and “it’s” or “your” and “you’re,” and don’t even get me started on their mistakenly employing apostrophes when trying to indicate a plural, using “FPGA’s” instead of “FPGAs,” for example. And it’s not just engineers; many of the communications I receive from doctors, lawyers, and other professionals are riddled with such elementary errors that it’s hard to know whether to laugh or cry.

The bottom line is that it doesn’t matter whether you are just starting your career or if you are a pillar of professional society, if you write like a dingbat, people will snigger behind your back and cast aspersions.

There are, of course, countless books that explain English grammar and punctuation in excruciatingly nit-picking detail, so how can it be that so many people are so bad at writing things down? On the downside, English is a tricky language with myriad convoluted conventions and regulations. On the upside, there are a few simple rules and ways of doing things that are easy to learn and that will make a huge difference to the way in which one’s writings are perceived. Consider the extremely complicated technical chart shown in Figure 1-1 from the book (used by kind permission of myself). 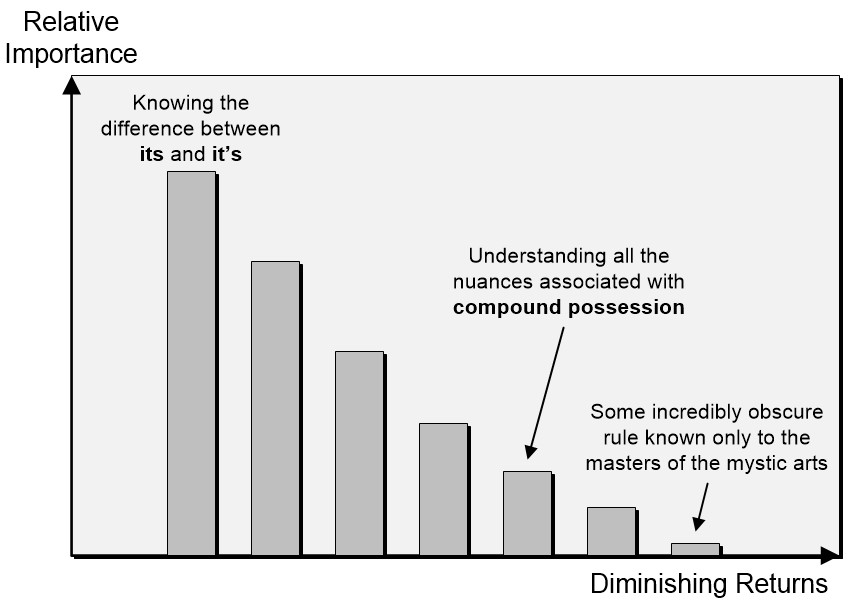 I think this proves beyond a shadow of doubt that readers of my book will reap a huge return-on-investment by spending only a little time learning a few core concepts. By comparison, it could be argued that they would gain little advantage from devoting years of painstaking effort to master some convoluted sentence construction that they would probably never actually use, and that their readers would fail to appreciate even if they did.

In an ideal world, of course, it would be wonderful to understand everything there is to know about everything, but if we acknowledge that the majority of my readers’ interest in grammar and punctuation is minimal at best, then we are obliged to prioritize. In my case, for example, the primary audience for my writings is engineers, the majority of whom wouldn’t recognize a split infinitive or a dangling participle if one were to crawl up their leg and bite them on a very unfortunate portion of their anatomy.

The bottom line is that it is not the intention of my book to teach everything there is to know about English grammar and punctuation. Instead, I intend to ponder only a sprinkling of the really important points that will make my readers look extremely silly if they get them wrong.

The main body of the book is going to be composed of around 50 chapters. Don’t Panic! Each of these chapters will address a single simple topic and be only a couple of pages long. Let’s take the chapter on “Its” versus “It’s,” for example. You may think that you know all there is to know about this topic, but I may manage to surprise you with the odd nugget of knowledge or tidbit of trivia. The remainder of this column is taken directly from this chapter. After you’ve perused and pondered the writings below, I’d be very interested to hear what you think.

As we noted earlier in this book, its and it’s each have only three letters, and the same three letters at that, so it wouldn’t appear to be beyond the bounds of possibility that we can master the correct usage of these little scamps. That’s why it’s such a crying shame that so many people manage to mix them up.

Of course, it may be that some people simply don’t think this is important. Trust me; they are wrong. If you are wading through the childlike scribblings of someone who misuses its and it’s, the effect is akin to stubbing a metaphorical toe because it makes your metaphorical eyes water (this does, of course, assume that you know the difference yourself). It also leaves you thinking something along the lines of “What a drongo!” (where “drongo” is Australian / New Zealand slang for a stupid or incompetent person). The sad thing is that the author of the work you are reading may well be extremely intelligent and articulate, but their sub-standard writing skills negatively impact your impression of them.

Fear not. We will not allow you to become one of their number. Together, we will learn how to make these itsy-bitsy three-letter words bend to our will. Let’s start by noting that, in the same way the pronouns he and she have the possessive forms his and her, respectively, so the pronoun it has the possessive form its. This allows us to say things like:

This chair has lost its leg.

That squirrel has misplaced its nuts.

The car lost its power.

The committee published its decision.

The important thing to note is that this is different to the way in which we form the possessives of nouns. Singular nouns form their possessives using ’s (that is, an apostrophe followed by an s); for example:

The dog’s dinner… (A feast belonging to the dog)

The boy’s ukulele… (A ukulele belonging to the boy)

Meanwhile, plural nouns ending in s form their possessives by simply adding an apostrophe; for example:

The girls’ chainsaw… (One chainsaw shared by a gaggle of girls)

The girls’ chainsaws… (Multiple chainsaws owned by some scary girls)

As we discussed above, however, in the case of the third-person, singular, neuter pronoun it, we simply add s to form the possessive its. To put this in a nutshell, its is a possessive pronoun that is the neuter version of his and her and pretty much means “of it” or “belonging to it.” By comparison, it’s, with an apostrophe, is a contraction for it is or it has; for example:

Well, it’s a mystery to me. (Contraction of it is)

It’s been great to meet you. (Contraction of it has)

One reason for the confusion between its and it’s — where such confusion is far more common than you might think — is that, in the case of nouns, the ‘s form (an apostrophe followed by an s) is successful in covering both the possessive and the contraction cases; for example:

Harry’s hat is on his head. (Possessive: The hat belongs to Harry)

Harry’s going to the pool. (Contraction of Harry is)

How do we manage to tell the difference between these two flavors of Harry’s? Well, we do it from the context because we are incredibly clever at things like that. On this basis, you might be forgiven for wondering why it’s shouldn’t follow the same rule – that is, to act both as a possessive and a contraction and leave it up to the reader to decide the actual meaning from the context. “Impossible!” you cry? Well, we manage to do it with the spoken word without any difficulty, don’t we?

Actually, things aren’t quite as clear-cut as you might suppose. Let’s start by reminding ourselves that there are seven possessive pronouns in modern English: mine, yours, his, hers, its, ours, and theirs (in the past, folks also employed the word thine, meaning yours, but we don’t tend to see this usage anymore, which is a shame because I rather like it).

The way in which possessive pronouns were used remained something of a muddle until around the beginning of the 1800s. Prior to that time, some folks used apostrophized forms while others favored un-apostrophized versions. In fact, the contraction of it is used to be the word tis, while it’s was commonly used as the possessive of it – the exact opposite of the way we do things today!

Later, as the use of the word tis faded away, it’s was increasingly used to represent both the possessive and the contraction, leaving it up to the reader to determine the meaning from the context. Eventually, sometime during the early part of the 19th century, those good-for-nothing grammarians settled on the somewhat arbitrary decision that its would be used to represent the possessive while it’s would be used to represent the contraction. And that’s where things stand today. (If I ever manage to finish building my time machine, there are a number of grammarians who are going to be very unpleasantly surprised, let me tell you.)

Remembering that language is an evolving beast, we should be prepared to acknowledge that the pendulum may swing, and it’s not beyond the bounds of possibility that things may change again in the future. At the time of this writing, however, all we need to do is to remember the following:

It’s (with an apostrophe) is the contraction meaning it is or it has.

Its (without an apostrophe) means “of it” or “belonging to it.”

Useful Tip: Deciding Which One to Use

If you are ever unsure — after you’ve written a sentence containing its and/or it’s — as to whether or not you’ve got things right, there are two simple tests you can perform as follows:

Congratulations! Henceforth, you should no longer have any trouble writing or decoding a sentence like: It’s a hot and sticky day and my dog is scratching its ears, which means it’s going to rain.