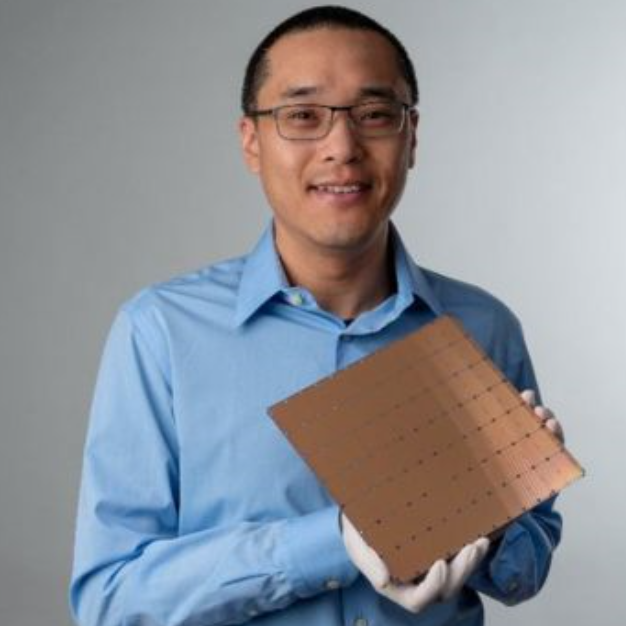 [A previous version of this article contained a metaphor to watching pornography which has been removed, with our apologies.]

For two days in late August, an estimated 1,000 engineers crowded into Stanford Memorial Hall in Palo Alto, Calif. for Hot Chips 2019. #HotChips19, aka #HotChips31, featured some of the most impressive microprocessors seen in Silicon Valley in some time. That’s because we are in a new golden age of chip architecture, according to tech gurus John Hennessy and David A. Patterson, who co-wrote a leading textbook on computing and were among the engineers at the annual event.

The golden age was born when two opposing trends smashed into each other – the decline of Moore’s law and the rise of deep learning. The decline in Moore’s law basically means tomorrow’s semiconductor process technologies won’t speed up yesterday’s processor designs anymore.

That’s bad timing, because, since about 2012, the computer industry basically discovered a whole new way to compute stuff with deep learning – aka AI. It can identify your face in a picture, translate an article like this one into Hebrew, and even make occasionally smart dinner recommendations faster than your significant other. The trouble is, it needs lots of high-performance microprocessors running mountains of linear algebra equations.

So, silicon-savvy venture capitalists and entrepreneurs have cold-called every chip architect in their Rolodexes over the last few years. They’ve formed a few dozen startups and as many projects in major companies to create the new Holy Grail – the AI accelerator.  This new breed of chips comes in two flavors – training (chocolate) and inference (vanilla), though, eventually, there will be several flavors of inference.

Reveals of these AI accelerators made up about half of the two-day program of Hot Chips 2019. As it turns out, there’s a boatload of other things happening in tech these days, so the other half was a Baskin Robbins of silicon.

Startup Cerebras won the award for the biggest reveal—an entire wafer (minus shaved off silicon moustaches) dedicated to AI training. It was the talk of the show, with one investor calling its approach a whole new way to build computers.

Time will tell whether Cerebras can actually ship and sell its 46,225 mm2 processor profitably, let alone whether anyone else will be able to master its technique of wafer-scale integration. Others have tried and failed.

Huawei in some ways had an even more evocative treat for the crowd. It laid out details of its entire family of AI processors and the systems they go into. A top Huawei engineer did this from the safety of a video hookup from China, lest the Trump administration arrest him for indecency or some other trade violation.

China’s communications-systems giant made its point that it could be almost entirely self-sufficient in this new ultra-competitive area of AI. It needs only a leading-edge, high-volume foundry, and the main country with one of those is Taiwan, which China apparently hopes to annex, along with Hong Kong, someday.

Alibaba, the Amazon of the East, doesn’t need any AI accelerators from the West either, it seems. It described a part that could process voice commands for a smart speaker in 1/50th the time of a top GPU. So watch out, the Party is listening, and it can understand what you are saying.

Not to be undone, Intel announced two AI accelerators at the event – one chocolate and one vanilla. One of its veteran firefighters, Gadi Singer, was in the wings making sure the talks came off without a hitch. Intel even staged a nearby tongue-in-cheek show one evening after Hot Chips with two of its top architects working on a third chip known so far only by a showbiz name meant to inflame the imagination of techies -Xe. The “e” apparently stands for exascale, in homage to the Aurora supercomputer expected to be the first system using it.

Rounding out the AI part of the program, startup Habana described a chocolate chip that can scale out cheaply using standard interfaces such as Ethernet. Xilinx described its chip that can make chocolate or vanilla, and Nvidia, which leads in data center AI, disclosed a research project – sorry, no peeks at its 7nm Ampere until 2020!

Like Nvidia, Facebook just teased the crowed with a talk on Zion, its accelerator-agnostic system. No word on what, if any, silicon it is designing, although it is working on an open-source AI compiler to pour over Zion. O happy day!

In a sign of how fast AI is moving, the MLPerf non-profit that is developing benchmarks suggested that it wants to double the number of metrics it has created so far. In addition, it is broadening its purview to include repositories of data sets and best practices.

At this rate, the organizers of Hot Chips 2020 will have to turn away good AI papers or rename the event AI Chips. Luckily, that was not the case this year.

Tesla gave a talk on its accelerator for self-driving cars. Intel and Hewlett-Packard Enterprise described advances in storage-class memory with Optane chips and the first GenZ chip set, respectively.

A handful of talks described emerging packaging technologies that are cropping up almost as fast as new architectures. (Arguably we are also in a golden age of chip packaging.) And AMD even revealed a new x86 core – the sort of talk that would have been the highlight of the show back in the golden age of PCs.

At the end of the second day, organizers scheduled a fun talk to help engineers cool down before they were released back into the daylight of the Stanford campus. Microsoft described the silicon guts of its latest HoloLens mixed-reality headset. Yes, Virginia, all this and VR, too!

Attendance broke historical records for the event that was created back in the heyday of the 386. Red wine flowed at evening receptions as engineers reconnected with former colleagues and bosses and networked with potential new ones.

There were plenty of reasons to celebrate. Salaries for AI-savvy engineers are going through the roof, and lifetime employment is virtually guaranteed for anyone who can spell RTL.

It’s a little tougher for those of us who write about all this stuff, given the broken print advertising model (thank you, Google). But hey, even we non-technical folks downstream picked up on the excitement and had a bit too much wine.