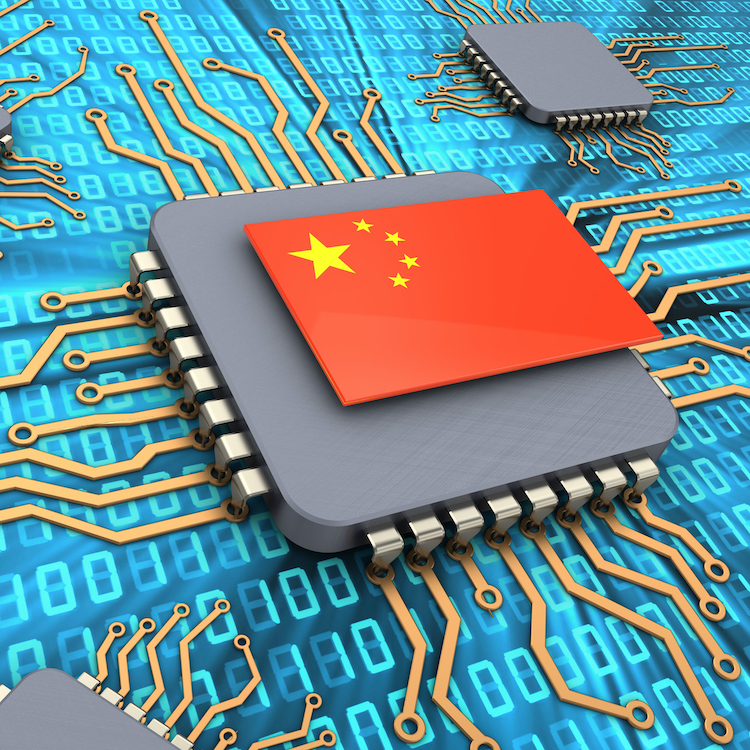 FPGAs: Made in China

It all started with a post from one of my LinkedIn connections, Tim Davis:

“It seems like the golden age of the pure FPGA is disappearing to me. Am I right?

“The warning shot, that FPGAs were on the way out, was delivered three years ago by Xilinx CEO Victor Peng. See Steve Leibson’s EE Journal article: Why does Xilinx say That its New 7nm Versal ‘ACAP’ isn’t an FPGA?“

Well, if Tim was going to cite one of my EEJournal articles on LinkedIn, I felt that I’d better reply, so I wrote back:

“Tim, ‘pure’ FPGAs left the building two decades ago. The original Xilinx XC2064 was a ‘pure’ FPGA with nothing more on chip than programmable logic and interconnect. When FPGA vendors started cramming Ethernet ports, DSP slices, large SRAM blocks, and finally entire microprocessor subsystems into their parts, they ceased being ‘pure.’ However, the loss of purity came with a massive increase in utility.”

“Yes I agree. The word choice of ‘pure’ was not ideal. It is possibly closer to say that I was aiming for the idea that the majority of the designer’s functional intent is captured in the fabric and not in the available hardened IP.”

I then wrote back to Tim:

“Well, if you pick a spot on the evolutionary timeline of any semiconductor, you’ll find that evolution is in full swing. Take RISC processors, for example. They were originally supposed to be simplifications of microprocessor goodness to reduce the number of transistors consumed and to get clock speeds up. Now, look at ‘pure’ RISC processors today and you’ll see lots of multi-level caches, special function units, memory protection circuits galore, and all the bells and whistles that RISC supposedly left behind.”

This interchange over LinkedIn got me thinking on two parallel tracks. First, there are mainstream FPGA vendors who still offer mostly “pure” FPGAs in the Tim Davis sense. Those vendors include Lattice – which bought FPGA vendor Silicon Blue in late 2011 – and Microchip, which bought Microsemi in 2018 and picked up former FPGA vendor Actel in the bargain. Even Intel and Xilinx continue to offer smaller, “low-end” FPGAs in their Cyclone and Spartan product lines respectively, although they’re not really all that “pure” in Tim Davis’s sense, which I take to mean looking more like FPGAs from the 1990s and earlier.

But I found my second train of thought more interesting for the purposes of this article. That track took me (or at least my mind) across the Pacific Ocean to the People’s Republic of China (PRC), where a few semiconductor startups have dipped a toe into the FPGA pool. I’d read about several FPGA vendors working to create a domestic FPGA supply in the PRC, and I’d never seriously studied them. This seemed to be the right time to investigate.

A bit of research turned up the following five FPGA companies based in the PRC. With a bit of Google elbow grease, I was able to find the URLs for each company:

Before I launch into an analysis of the FPGA offerings from the first four companies listed above, here are some of my initial observations:

The FPGAs from these companies are mostly “pure” in the Tim Davis sense: they look like they could have been developed in the 1990s. They’re largely arrays of programmable logic, based mostly on 4- and 5-input LUTs, and most offer only parallel I/O pins with adjustable voltage levels (with a few exceptions).

(Note: Logic-level translation was an early feature added to “pure” FPGAs as they started to absorb functions from other chips typically found next to the FPGA on a circuit board. Adding level translation to the FPGA was an effort to deliver more value to design engineers and to capture a larger share of the system BOM dollars. The addition of on-chip I/O level translation to FPGAs killed a rather large business in level-translation chips, or level shifters, for more than one chip vendor. I’m thinking about you, Texas Instruments and Sprague Semiconductor.)

A few of the devices offered by these PRC FPGA vendors incorporate “high-speed” transceivers, but the maximum data rates offered are much lower than the transceiver speeds available in devices from US-based FPGA companies.

Some of these FPGAs from PRC vendors incorporate 32-bit microprocessor cores, which makes them less “pure” from Tim Davis’s perspective but, in my opinion, far more useful for real designs. Every design project now uses at least one microprocessor; they’re just so darn handy. So if you need a microprocessor and an FPGA to meet your design goals, you might as well get them on one device if possible. And if you can get big chunks of SDRAM and Flash in the same package, so much the better! It’ll save board space.

You’ll find that the Web sites of these vendors and their data sheets are largely written in Mandarin Chinese, which makes a ton of sense if you assume that these companies mainly target the domestic PRC market. So, if you want to use these FPGAs, you’d best be able to understand Mandarin in addition to Verilog or VHDL. That’s also true for the development tools accompanying these FPGAs.

Summaries and a quick analysis of the FPGA families I was able to find on the Web sites of the five FPGA companies in the PRC listed above appear in the table below. I readily admit that the table is incomplete, which reflects the state of the data sheets I found, the mixed use of Mandarin and English in the data sheets (and my inability to read Mandarin), translation issues with Google Translate (“Nuclear Voltage” indeed!), some obvious omissions in the data sheets, and a typo or two. Still, there’s plenty of information to form some general impressions. 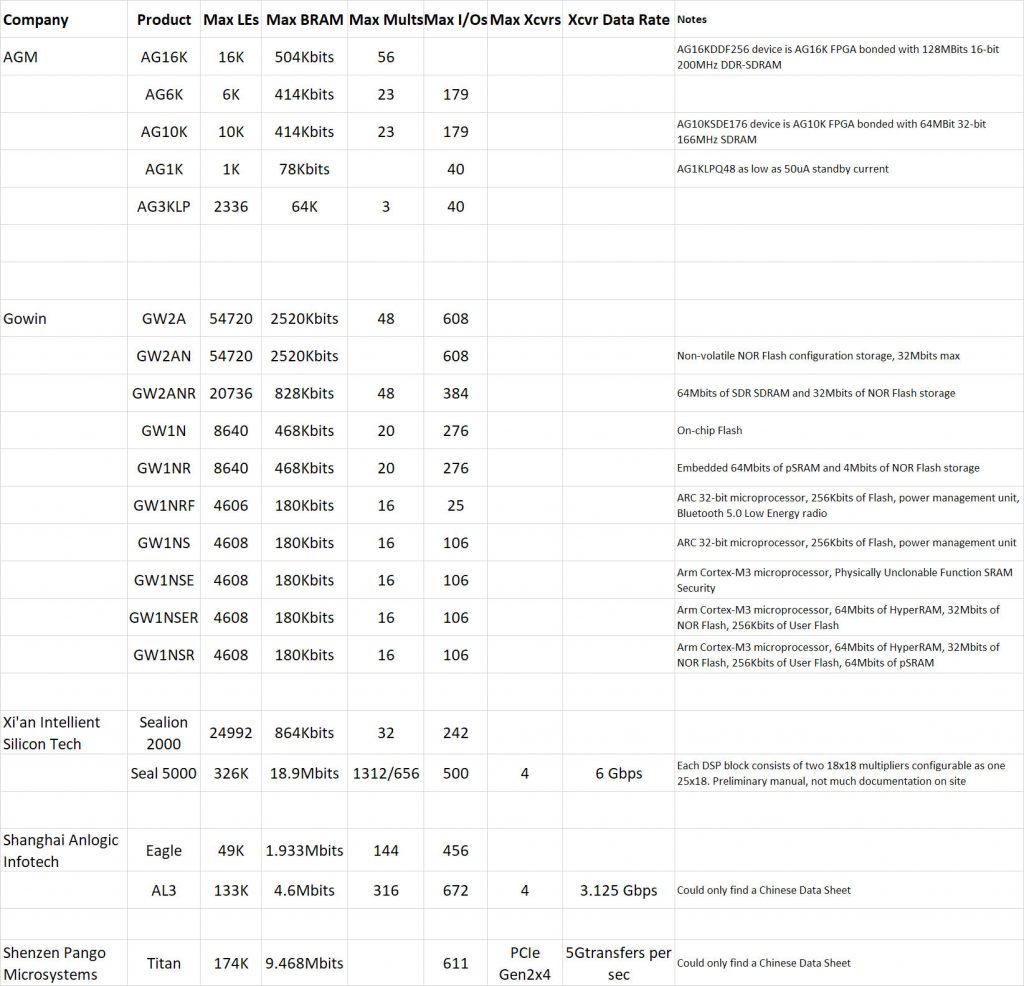 The FPGA offerings in the table seem to fall into two broad groups. The FPGAs from Shanghai Anlogic Infotec, Shenhzen Pango Microsystems, and Xi’an Intelligent Silicon Tech tend to be larger, and most include some high-speed transceivers. The FPGAs from AGM and Gowin tend to be smaller in terms of the number of LUTs, BRAM bits, and multipliers – although Gowin’s offerings are clearly getting larger given the larger FPGAs in the GW2A family. AGM and Gowin offer very interesting FPGAs that incorporate SDRAM and NOR Flash storage packaged with the FPGA.

Gowin also offers FPGAs with embedded 32-bit processors, either the ARC processor core (now available in the DesignWare library from Synopsys) or the Arm Cortex-M3 core, which is a capable embedded microprocessor. The Xi’an Intelligent Silicon Tech Seal 5000 FPGA family has one member with a 32-bit “microcontroller core,” which it calls an “M3.” Quite likely, that’s an Arm Cortex-M3 core, but with the lack of information on the Web page, I’m just guessing here.

If you look at the FPGAs in the above table, you might conclude that they offer little serious competition to the more advanced FPGA offerings from Intel, Lattice, Microchip, or Xilinx. I don’t believe that’s the initial intent, however. These are capable FPGAs in their own right, and these five companies obviously cater to the PRC’s domestic market, given the language emphasis on the Web sites and the documentation. Viewed in that light, these are very interesting initial offerings from five domestic PRC FPGA vendors. Bigger and better FPGAs from these companies are sure to follow, as evidenced by the early information about the Seal 5000 family from Xi’an Intelligent Silicon Tech.

I suppose you might ask if these companies will make sales headway in the rest of the world outside of the PRC. Gowin has established sales offices in many countries, for example, and clearly wishes to sell its FPGAs on the broader world stage. The key to that success will be excellent translations of the company’s FPGA documentation, responsive support for the company’s FPGA design tools, and ecosystem support in countries beyond the PRC. I believe the lack of adequate translated documentation and development tool support needlessly restricted many Japanese microprocessors and microcontrollers from broader use worldwide outside of Japan; FPGAs have similar requirements. We’ll have to wait and see what happens. I’m quite eager to see the next moves and new device generations from these FPGA companies.