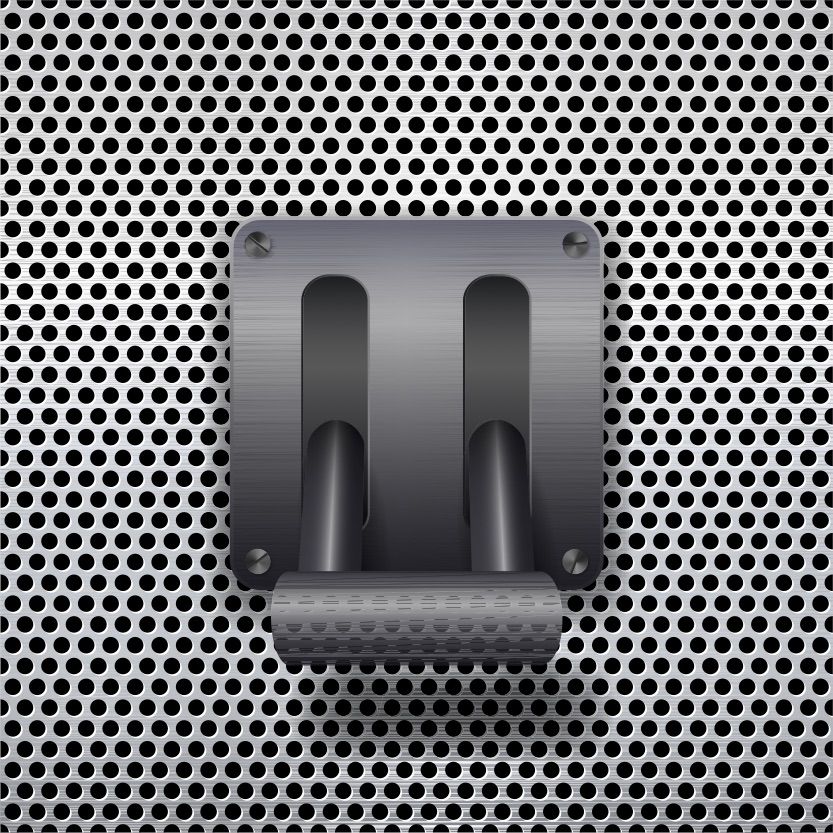 An Old Cantilever Is New Again

It’s been a while since we’ve talked about a new company in the MEMS space. All that quantum fluctuation a few years back – companies popping into and out of existence as MEMS experienced the cool factor – have settled into proper family lives, with PTA meetings and birthday parties and all.

So it caught my eye when I got wind of a company called Menlo Micro (a GE spinout) doing switches – RF and power in particular. What could possibly be new to one of the most basic MEMS structures? And how could a miniaturized switch manage to shunt high currents and high frequencies around without, well, evaporating in the process?

The answer involves one of the oldest bugaboos in the MEMS industry: stiction. Let’s back up for a quick review and then look at the route Menlo has taken.

Stiction has been legendary in MEMS history, although Menlo Micro refers to it more as a myth. The story is straightforward enough: if you take a simple cantilever as an example – a diving board that, when flexed down, is supposed to contact a pad and complete a circuit – the idea is that you apply a voltage to bend the cantilever to make that contact, and then you remove the voltage to open the contact.

If you apply macroscopic logic, then bending the cantilever (while keeping it within the elastic range) is like pushing a spring. It will stay down as long as you force it to. But as soon as you remove that force, the natural spring restoring forces will push the cantilever back up to its original position. But a microscopic complication has clouded that picture: when removing the bending force, local atomic-level forces hold onto the cantilever beam, preventing it from releasing into its original position.

It’s kind of like friction, but it earned the name “stiction” because it notoriously caused switches to stick in the “on” position (and officially is “static friction”). We’ve done a number of stories in the past that involved stiction as a main protagonist – or antagonist – whether about “squitches,” leveraging the feature for memory, capacitor arrays for antenna matching, or alternative ways to make switches.

According to Menlo Micro, however, in many cases, the offenses with which stiction has been charged may, in fact, have been committed by yet another nefarious fellow: wear-out. That’s not to say that it might not have been aided and abetted by stiction, but a situation where a switch works for a while and then sticks shut may simply be experiencing the end of its useful life, with the restoring force decaying to the point where it can no longer pull the cantilever back up into place (against stiction or even against gravity).

Note that the realm we’re discussing here is that of surface-micro-machined devices. As another quick reminder (since it’s been a while), surface micro-machining has been responsible for much of the reduction of MEMS cost. It relies on thin films deposited on top of silicon; those films are then etched and shaped into some useful device, which is often made of metal. It stands in contrast to bulk micro-machining, where you burrow into the silicon and create silicon-based structures.

Bulk devices are more expensive to make, although they perform better, based on the crystalline structure of silicon. So much of the MEMS world has looked to surface micro-machining to turn out the high-volume consumer devices that you might find in your phones. They’re never going to be navigation-grade, but they fit the cost profile necessary to appeal to us consumers; they’re “good enough.”

Given Menlo’s premise that the purported stiction issues were really a wear-out problem, and given that they’re leveraging films of materials deposited on silicon, not silicon itself, that made this a materials challenge. Could they find a material that doesn’t wear out the way conventional materials did?

Well, had they not, we wouldn’t be having this little conversation, now, would we? They resisted looking to more complicated structures to solve the problem; instead they went back to the simple cantilever, using a material that they say performs almost as well as silicon. To be clear, it’s not a magic material that never wears out, but the lifetime is extended by orders of magnitude as compared to conventional metals.

And what is this elixir of life? Yeah, right, like they’re going to tell us… They say it’s an alloy; it’s not exotic; it’s fab-friendly; it’s electro-plated – and that’s all they got to say about that.

To be clear, they don’t use silicon as a substrate: they use fused silica (more or less, glass). The structures they build are all metal. The glass provides good isolation and low leakage. In this environment, the holding force is applied via a low-leakage capacitor. The charge that holds the cantilever down has a hard time leaking away, so the holding power for keeping a switch engaged is very low.

So that addresses the first part of the issue: getting the basic switch to work longer. But this story is about more than that: it’s also about power and RF switching. Try to switch power through a single cantilever, and, if you look really closely, you might see a little nano-mushroom-cloud floating above the place where the switch used to be.

Problems like this are often dealt with by having a high-power path and a low-power control path – say a switch that controls a transistor that passes the high current, so that the current doesn’t have to go through the switch itself. But no, for the most part, that’s not been their approach.

Let’s start with one challenge: arcing. Even with a single switch opening or closing a current path that it can handle reliably, there’s always that point when opening and closing where the electrons get super excited and can’t wait to jump the gap until the switch is nicely closed. No, they bail early, causing a spark. And when the switch opens, those electrons still don’t want to stop playing despite the fact that Mom told them to come in; they keep going after the switch opens, sparking until the gap finally gets too wide.

Such arcing can cause pitting and other problems – only a little each time, but, over time, after lots of contacts, it can be a wear-out mechanism. They had a couple solutions to this issue, the first of which is just plain brute-force: make sure there’s enough contact material there to sustain the switch well beyond the expected lifetime of the product.

The second solution is somewhat more subtle: if needed for higher-current applications, they have a little bypass circuit that they can briefly engage to divert some of the current so that it switches “warm” rather than “hot.” Because that bypass circuit is used only briefly and occasionally, it can be small and inexpensive. Details are not available.

Why Use One When an Array Will Do?

The other way they handle high current is to use arrays of switches, spreading the current around through multiple cantilevers and thus keeping the current through any one cantilever at a reasonable level. Except that there’s a gotcha here as well: synchronization of those switches.

Yeah, if they’re all actuated by the same voltage, then, in theory, they should all move in unison, touching down and lifting up at the same time. Except that nature doesn’t work that way; there’s always variation between cantilevers, no matter how hard you try to make them uniform. That means that there’s always going to be a fastest switch and a slowest switch.

Let’s take the fastest one as an example: as you engage the array, that speedy dude is going to race to the bottom, plant its flag in the surface, and do a victory dance as the other switches catch up. That is, until it realizes that, by being first, that means it’s going to carry all the current until the others show up. Which might mitigate that victory dance… he’s looking a little piqued there…

Likewise when opening, the slowest switch, which was enjoying a nice, leisurely nap, suddenly realizes that everyone else has already gone home, and it’s getting really hot because it’s handling all the current alone.

First off, they try to manage the switching such that it’s not instantaneous, but rather gradual, designed to take anywhere from nanoseconds to microseconds to switch. (Slower switching does leave more time for arcing…) But if, in the end, they still have a first/last contact issue, then that bypass circuit can be used to limit the currents. 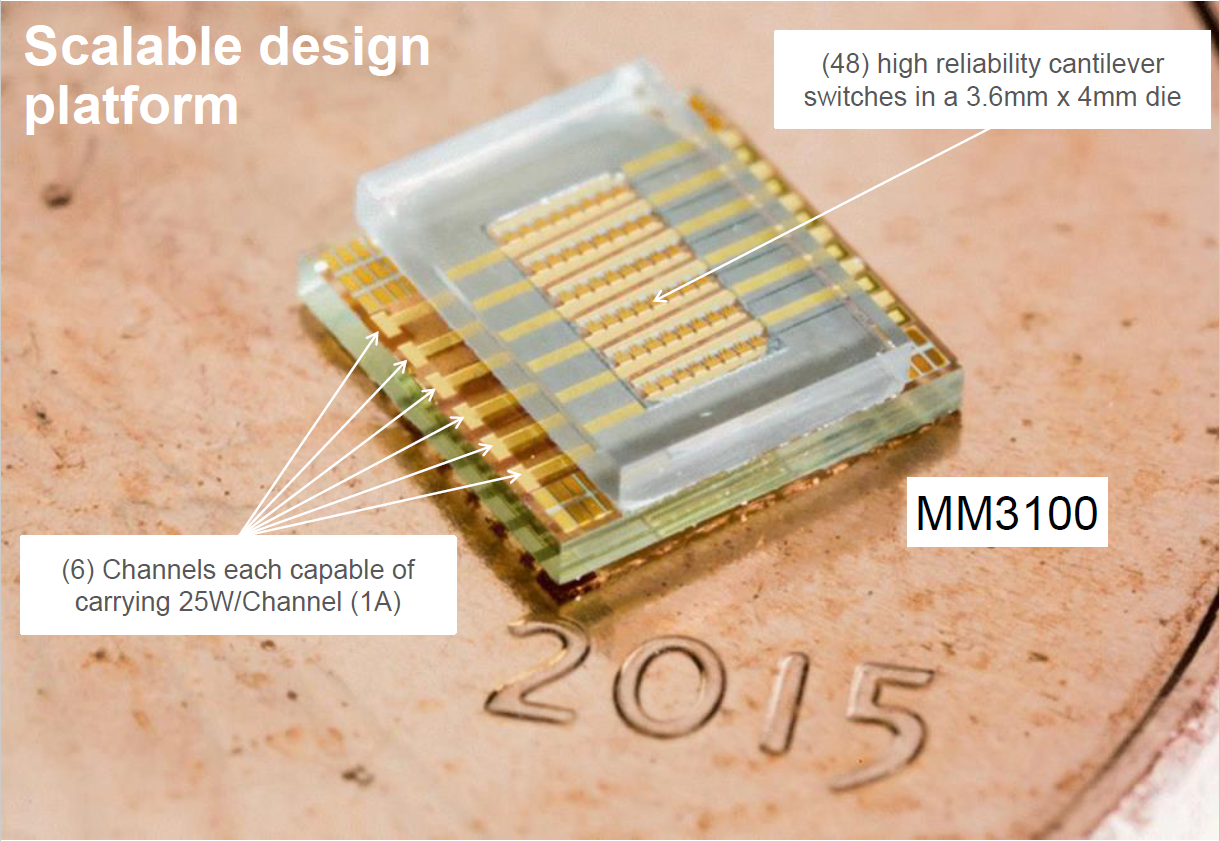 They say that array design permits compliance with both DC and AC requirements – that latter bit being particularly important for RF switches.

At the recent Mobile World Congress show, they made an announcement of performance improved by ten times for high-frequency RF switches. 5G being all the topic of conversation these days means that useful devices at high frequencies are going to get attention.

For RF switches, they say that a common figure of merit takes the on-resistance (which you want to be low) and multiplies it by the off capacitance (which you also want to be low so that you don’t get coupling when the switch is open) – RonCof. (with units of seconds). Menlo Micro claim that they have a way to reduce RonCoff by 90% to below 50 fs. In fact, they’ll introduce devices with a RonCoff of 10 fs.

They claim insertion loss below 0.3 dB at 12 GHz. They can handle frequencies from DC to 18 GHz with good linearity, and they see the upper limit pushing into mm-wave range in the future.

Of course, these aren’t quite ready yet – delivery will be 12-18 months out, but they’re now on record as promising to deliver.

So there you go: there’s always room for something new. Think of it as the new young couple that just moved into the established neighborhood. Who knows; they may come by needing a cup of sugar…

One thought on “An Old Cantilever Is New Again”