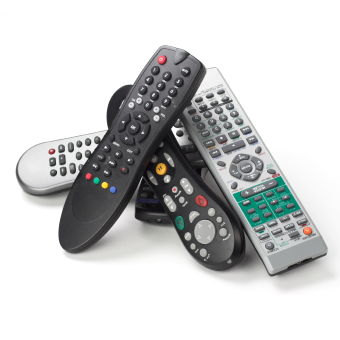 Just What Does That Mean?
by Bryon Moyer

Qualcomm Atheros recently announced a new platform for the home (and, in the future, for business). It’s partly predicated on the fact that we’re consuming lots of bits over the interwebs. But that just merits a faster packet processor, and this is more than that: This is an “internet processor.” Exactly what is an internet processor? I was frankly wondering whether it was the classic marketing case of “define a new category so that you’re the only one in it,” but upon further musing, I don’t think it’s quite that –  although a precise definition still eludes me.

I had a hard time sorting through this, partly because, really, I’m not holding up my end of the technology burden here. I’m not a gamer. I don’t have a regular TV. I simply connect to the internet and use a big monitor as my screen.

So, mercifully for me, I don’t have these big, clumsy TV menus to surf with bazillion-button remotes. And I don’t have the problem of trying to wade through 700 channels in a desperate (and usually unsuccessful) attempt to find something minimally repulsive to watch. (I had two recent chances to scan channels… it was appalling. If you don’t like sports or shopping, well, there’s not much on. All for… how much per month??)

Instead, I have a wireless keyboard and a wireless mouse and they get me pretty much anywhere I want to go. My cable modem lets me go there. Which colors my view of things. More on that in a moment.

Let’s start with a look at the block diagram below. The organization is pretty clear. All the side things are I/Os, so we’ll focus on the middle. At the bottom is the Network Accelerator. And this is going to do the things we would expect any self-respecting packet processor to do. It supports up to 5 Gbps of network traffic. That sounds like a pretty fast internet connection, but, in fact, this is intended to handle all of the home traffic via WiFi, Ethernet, and even HomePlug and LTE. So this beast is clearly intended to be the Communicator In Chief in the home. 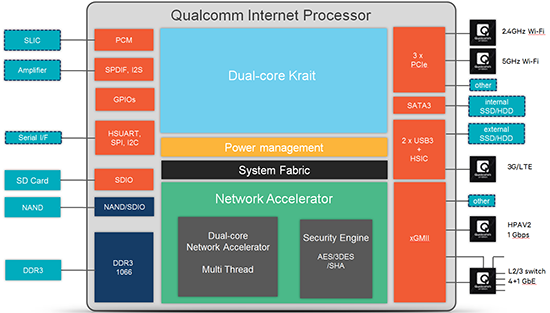 But it’s the top part that is more of a mystery. A dual-core Krait CPU. What could that be all about? That appears to be what turns this from a packet processor into an “internet processor.” They’ve added what could effectively be called an application processor. But why does that make this an “internet” processor? And what are the benefits?

And that’s where it starts to get a bit more mysterious. At least I had something of a hard time wrapping my head around it. That was partly because of how I’m accustomed to interacting with cable. So let’s clarify that there are two ways one might exit the home and wander down the coax. (This applies to DSL as well with appropriate equipment; I’m focusing on cable for simplicity.)

From this point on, I’ll be speculating a little. Or a lot. I pushed hard with questions trying to understand the value of the whole internet processor concept, and, honestly, it all seemed very vague. In particular, I wasn’t getting a good sense of how users would benefit from this.

I think that’s largely because this isn’t actually about the user; this is about the cable company. (Or whoever the ISP is.) They’re watching all this home networking stuff grow, and it’s not obvious how it helps them. Yes, it means more traffic over their pipes, but so what? Perhaps they can add their own smart home functionality in the set-top box. In fact, it feels like they’re trying to make the set-top box (or whatever the future version of that is called) into a complete home gateway and network manager.

The reason I started looking somewhat askance at this is the fact that, from where I sit, all of the things that could be done with this internet processor can already be done. Got a smart home system of some kind that needs to get to the cloud? It can get there right now through your cable or DSL connection. Or your phone. No internet processor functionality is needed.

The market positioning is also clearly aimed at the ISPs; there’s no statement about how this helps the user – it’s all about how it helps the ISP to add “apps” and generate new revenue opportunities.

Which – call me cynical – made me wonder if the ISPs are planning to erect barriers to try to exert some control over the burgeoning smart home space. From my viewpoint as an internet-only user, I still can’t wrap my head around what Comcast could put in there to make my life easier. I come up only with things that limit my options. In this era where large companies are all struggling to control life, the universe, and everything, such things make me wary.

But this all comes from the viewpoint of someone without a TV or a set-top box. From the standpoint of a TV user, by contrast, the view could be different. TV-land and the internet have historically been separate spaces. Cable TV gets you access to the channels you subscribed to (OK, and 500 other channels you care nothing about) and that’s it. Any fancy new functionality comes through the combination of set-top box, remote, and the cable backend. The internet isn’t officially involved in any of that.

It’s easy to imagine, however, that there’s interesting stuff on the internet that could be merged into the TV experience. The challenge is that the internet is a computer/browser paradigm, not a TV paradigm. So someone has to take the internet content and make it accessible on a TV with only a remote (or, in the future, with gestures, “that look,” yelling at the TV, throwing a shoe, and other advanced forms of interaction).

I guess you could further imagine that you could host your smart home functions on your TV as well, again, using your remote to navigate. That wasn’t really obvious at first because so much smart home functionality assumes the use of mobile phones, as opposed to yet another remote control, as the primary user interface. But perhaps there’s a market for a TV-based smart home solution.

So, as I think about this more and more, I can start to picture things that might make sense in that application processor. But I need to be clear: this is purely my speculation. The official materials are extremely vague, and my scenarios are not necessarily deserving of a name as all-encompassing as an “internet processor.” It’s more of an “internet translator for TVs.” Or perhaps “internet bridge.”

And I have to confess to being left with a feeling that I’m missing something. Perhaps by looking only at the two modes of using cable, I’m stuck in old paradigms; perhaps there’s a new vision that I’m not taking into account. At the risk of possibly having to give myself a huge facepalm, I’ll solicit your ideas in comments below as to what you would want to do with all that application processing power.

One thought on “An Internet Processor”