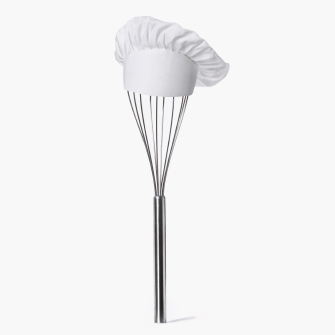 QuickLogic Does the Cooking For You
by Kevin Morris

The FPGA market is a wasteland – littered with the battered corpses of startup companies who thought they could build a better mousetrap. They attacked the strongholds of market leaders Xilinx and Altera and ended up paying the ultimate price. But none of these entrepreneurs were dummies. In fact, in just about every case they had a novel idea that brought significant advantages to the programmable logic designer.

The reason they failed, however, was remarkably consistent. It wasn’t because they had inferior chips. In fact, they often had devices with improved capabilities for whatever segment of the FPGA market they were attacking. It wasn’t because they didn’t know their customer, either. Most of them had a well-targeted marketing plan designed to win strategic business in key segments of the industry.

The place in which just about every FPGA startup has failed is their lack of ability to support the design process – in tools, documentation, and hands-on applications engineering. In our many surveys of the FPGA user community, one of the most common themes and reasons for choosing a particular FPGA vendor was “previous experience with this vendor’s tools and products.” That’s pretty telling. The FPGA design process is difficult and intimidating enough that many engineering teams choose a product, based not on which part performs the best, or even fits their application best. They choose based on what seems to them like the least-risk approach to getting their design done. In most cases, that’s the company whose tools and design flow they already understand. Nobody’s tools and devices are perfect, but the product whose flaws you know is far more attractive than the one whose issues are still hidden.

How, then, has a company like QuickLogic survived all these years? After all, even though they have excellent and useful FPGAs, they have never had a killer technological advantage that gave them a leg up on the competition. Similarly, they have never had a revolutionary set of tools that empowered the designer to do new things, or to do old things more easily. And they certainly never had an applications engineering army to rival those of Xilinx and Altera.

It turns out that QuickLogic is still alive and thriving because they recognized all of those things and outsmarted them. Instead of running a grocery store, QuickLogic is running a restaurant. They don’t sell you the raw ingredients, utensils, and recipes. They do the cooking for you and serve it up at your table – ready to eat.

Several years ago, QuickLogic changed their marketing message and their way of engaging with customers. Even though they still sell FPGAs, they stopped calling themselves an FPGA company. Recognizing that what customers really want is a standard, off-the-shelf product that will do exactly what they need, QuickLogic created the concept of the CSSP (Customer-Specific Standard Product). You want off-the-shelf chips? Tell QuickLogic what you want and they’ll put them on the shelf for you.

The advantage of all this for the customer is obvious – you don’t have to do the FPGA design work. QuickLogic does it for you. For QuickLogic, this also means that they don’t have the support and training burden for tools and a complex design flow that their FPGA-selling brethren must bear. Rather than trying to support a diverse set of sometimes-less-than-experienced customers through a complicated design flow with unfamiliar tools, the company needs only to have the tools and IP required by their own engineers, who are experts in both their tools and technology. As a bonus, this means that every customer’s design is completed by an expert – rather than by someone with little or no experience with a particular programmable logic family and the tools that go with it.

This strategy brings along some necessary limitations, however. QuickLogic obviously can’t be an expert in every possible application of their technology. They needed to focus on a few, high-value application areas where their technology would shine, and where they could offer IP (either by development or partnership) that would bring compelling advantages to the table. They also needed to focus on markets with high enough volume requirements that they could justify the cost overhead of doing the design work for the customer. The company decided to choose applications carefully and to go after selected opportunities where they could win valuable sockets in high-volume designs using the devices, IP, and tool technologies at their disposal.

Beneath this clever approach, the company still has to have an FPGA platform. For years, that platform was based on non-volatile, non-reprogrammable antifuse (QuickLogic calls the technology “Vialink”) programmable logic devices. While antifuse brings some nice advantages in power, performance, and reliability, it suffers badly in areas like logic density and – most notably – reprogrammability.

In the latest incarnation, however, QuickLogic has quietly changed all that. The company’s recently-announced “PolarPro 3” and “ArcticLink 3” FPGAs are actually normal, mainstream-style, SRAM-based, reprogrammable FPGAs. You won’t see the company popping out press releases bragging about the new platform, however. In fact, to most of the company’s customers, the change is almost irrelevant. They’ll still contact QuickLogic with their particular set of specifications and take delivery of working devices – ready to drop into their manufacturing flow. But the behind-the-scenes implications for QuickLogic themselves are interesting.

The press reports you will hear about the new families is the company’s new target application – context-aware sensor fusion (which we explained a couple of weeks ago). Sensor fusion is just the most recent application targeted by the company serving their designated customer base – manufacturers of mobile devices. The company realized a few years back that mobile device manufacturers were deploying massive volumes of products, and winning the hearts and minds of just a few mobile device designers could be the basis of a very lucrative business. So, QuickLogic went about identifying problems common to mobile devices that could be addressed with cleverly-applied programmable logic solutions.

To date, those solutions include processing for mobile displays – what the company calls “Display Enhancement Technologies” including VEE, a technology for improving the viewability of mobile displays in a variety of ambient lighting situations without requiring the power-hungry backlight to be adjusted up; and DPO (Display Power Optimizer), which significantly reduces display power by automatically adjusting backlighting according to ambient lighting conditions. The company also offers “smart connectivity” solutions that play to the strengths of their programmable logic heritage by allowing mobile device customers to connect just about anything to anything else, with a custom-designed FPGA doing the bridging.

Using these weapons, the company has won sockets in display, IO, wireless, driver, and storage applications in an impressive array of high-volume mobile devices. The latest additions to their arsenal – sensor hubs that handle full-time context awareness or data buffering from multiple sensors – are likely to further endear them to that audience.

The majority of the FPGA-using world isn’t likely to dig into the specifics of QuickLogic’s new FPGA families. The fact that the company is now producing ultra-low-power, SRAM-based, LUT-having FPGAs will not create a stir or demand a marketing response from FPGA leaders Xilinx and Altera, or even from now-more-direct-competitor Lattice Semiconductor (whose tiny iCE40 FPGAs are now directly aligned with QuickLogic’s new families). We think it’s pretty cool, though.