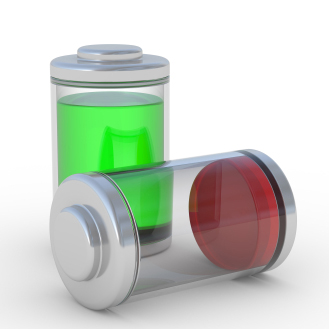 Bringing Batteries and Capacitors Together

Batteries and capacitors have existed – and co-existed – for a long time. Your typical basic electronics course will probably teach them in different chapters or on different pages because they’re so different: batteries are used to power a circuit; capacitors handle all manner of jobs from establishing timing in RC circuits to helping figure out where the poles and zeros go in an analog circuit to stabilizing the power rail.

That last one has been a standard PCB design feature for many years. It used to be simple: two caps of two different constructions and values to filter different power fluctuation frequencies. Same rule of thumb for all boards.

Things have gotten more complex with multiple power domains and increasingly sensitive circuitry, but that basic power conditioning job remains, even if it now uses many more tiny caps that may actually be buried inside a PCB.

For digital folks, the concept of “filtering” may send a shiver up the spine; we much prefer Butterworth on our pancakes than in our circuits. But, especially for bypass caps, it’s not that difficult. The cap stores charge, and when someone tries to change the voltage across the cap too quickly (remember that instantaneous isn’t allowed), it releases some of that charge or absorbs more to keep the voltage steady (or at least to slow down the change).

So, in this role, the capacitor is acting as an energy store, like the battery. The difference is the speed at which it can react. Because classic capacitors are electrostatic, they can release charge very quickly. Batteries rely on chemical processes, which evolve more slowly. So, while batteries hold more charge, caps are more responsive.

Said more accurately, batteries have higher energy density – energy per unit volume or mass – and capacitors can have higher power density, power being the rate at which energy is transferred. All of which is well and good, but which has historically been of more academic than practical value.

But that has changed with the appearance of so-called “supercapacitors” or “ultracapacitors.” The change is somewhat subtle: these caps are still marketed as working in tandem with the main power source, but the sheer capacity of these monsters has added some points of competition with batteries that didn’t really exist before.

This really hit me when I exchanged some emails with Cymbet, a maker of thin-film solid-state batteries. I was curious as to their position regarding the role of supercaps, and I expected the usual signal conditioning discussion (only on steroids). So I was surprised when I received a whitepaper that placed supercaps in competition with the thin-film batteries.

Upon closer reading, the difference became clear: these supercaps store so much energy that they can be used for more than just bypass filtering; they can, in some cases, act as a backup when the main power goes out. The Cymbet position is that their chip-scale batteries work better for such backup due primarily to far better self-discharge characteristics. But the fact that this was even an issue sent me back looking at some of the other stuff I had perhaps read too hastily.

For example, Maxwell, a maker of supercaps, had an infographic showing various different uses of their supercaps. And in many cases, you could mentally put them in the bypass category… kind of. But, for example, they’re used to store – and send back out – energy from regenerative braking, even on trains. You could look at that as conditioning the current generated by the braking system, but the more you think about that, the more it’s a stretch. And then, at the bottom of their list, there it is in unambiguous black and white: an example that explicitly touts backup for power outages.

So supercaps are now trying to take over some energy storage duties – more than just calming power ripples. What’s changed? Why are these things so “super” (or “ultra”)?

There appear to be a couple of different mechanisms that go into what makes a supercap different from a standard cap. The whole thing with capacitors is the thickness of the… barrier between the two sides. I intentionally didn’t say “dielectric,” even though that’s traditional in an electrostatic cap. Even electrolytic caps form a thin dielectric barrier in real time based on their chemistry.

But the newer beasts operate differently based on one or the other (and often a combination) of two different mechanisms, one electrostatic, the other electrochemical.

This gives you a layer of ions at the surface, right up against a layer of charge in the solid. Effectively, you’ve got this interface with charges all lined up – and yet the charges can’t move to create a current – the electrolyte can’t simply flow into the electrode. It’s as if there’s a barrier there, only there is no dielectric per se. (Turns out, this is a bit too simplistic a model, and the boundary structure is somewhat more complex, but this makes the concept easy to understand.)

The other mechanism relies on reduction/oxidation (“redox”) chemical reactions at the interface to create a double layer. Depending on the construction of the unit, the total capacitance may be dominated by this or by the Helmholtz layer, or it may be a balanced combination. But the overall effect can give these devices a capacitance that’s four orders of magnitude greater than that of electrolytic caps. That’s undeniably super.

So you now have a device that can store and release a significant amount of energy extraordinarily quickly. It has higher energy density than any other capacitor, but batteries still win by a few orders of magnitude where energy density matters. So these caps aren’t a threat to main batteries, although they are trying to challenge in the backup space.

All of these devices are available in production today. But there was some recent work out of the University of Illinois that suggests that this duality – batteries for energy, caps for power – may not survive. The U of I team came up with a battery technology having power density 2000 times higher than other microbatteries, putting them in the same realm as supercaps (without sacrificing energy density). They’re not necessarily going to be coming to a locomotive near you (famous last words), but could impact miniature electronics.

While power capacity is impacted by the rate of the battery chemical reactions, it appears to be dominated by the resistance inherent in the system. Ions need to make their way across the electrolyte in particular, and this is slow. Resistances in the electrodes also have an impact. The point being, lower those resistances and you can improve the power density.

The U of I team did this with solid porous electrodes placed exquisitely close to each other. They managed this by first depositing polystyrene particles that self-assemble into a scaffold above a chromium/gold pattern defining where electrodes would go. The size of the particles varied as they tried different alternatives; one was 330 nm, the other 500 nm. Nickel was then electrodeposited on the polystyrene scaffold. The polystyrene was then removed, leaving just the porous nickel.

Then each electrode was selectively electrodeposited with material: NiSn on the anode, MnO2 on the cathode (which was then “lithiated” to create LiMnO2). These materials were plating on the nickel scaffold, resulting in highly porous 3D electrodes. And here’s the key: these electrodes, laid out lithographically in the Cr/Au pattern, were formed in a tight interdigitated pattern. Meaning the distance of charge travel is very short. Kind of like interdigitated comb capacitors. Or the graphene supercapacitors that were printed on a DVD writer. (Coincidence??) Each “finger” was 30 µm wide, and the space between fingers was 10 µm.

The result is a high-energy (for a microbattery), high-power device that, if commercialized, could change the game. They can be manufactured on wafers, suggesting that they can be built cost effectively.

So for now, supercaps and thin-film batteries will continue to duke it out, especially in energy harvesting and other green types of applications where modest amounts of energy need to be managed. Beyond that, at the risk of sounding hyperbolic, a revolution in microbatteries could be in the offing.

University of Illinois paper (behind a paywall)

8 thoughts on “Bringing Batteries and Capacitors Together”