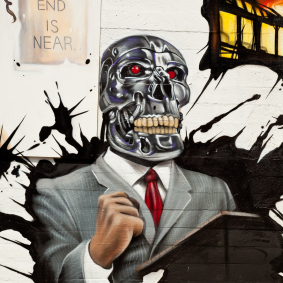 The Real Rise of the Machines
by Kevin Morris

We knew this was coming all along.

From Mary Shelley’s “Frankenstein” to Isaac Asimov’s “I, Robot”, to James Cameron’s “The Terminator” – our science fiction writers have been warning us for two centuries that our engineering masterpieces would one day rise up to defeat us. With no emotional capacity for remorse or regret, no human souls to temper their relentless pursuit of their goals, and no fear to give them pause, these perfect villains would multi-mindedly put an end to our nice little party where humans were the top of Earth’s food chain.

The real revolution has already started, and the humans are losing. But the science fiction writers got it terribly wrong. The machines didn’t come at us with lasers, guns, or weapons of mass destruction. They’re not patrolling the streets mowing us down one at a time while we make a frantic and futile run for cover. No, our machines are much smarter than that. They’re systematically de-constructing our society quietly, from within, and we’ve barely even noticed. They’re hitting us, not with bullets, bombs, or energy-beams, but with pinkslips. Technology is slowly and stealthily putting humans out of work.

And it’s all our fault.

If we’re doing our engineering jobs right, technology is steadily making humans more efficient. With the aid of the things we engineers are building, humans need fewer man-hours to accomplish the same work. Or – with the same man-hours, we can do much more work. The choice is ours. The consequence of the former, however, is that people don’t have to work as hard. Sounds sweet, doesn’t it? Instead of slaving away at desks for upwards of forty hours per week, people can simply show up Monday morning, look over the previous week’s results, dispatch their personal work robots with the week’s assignments, and head to the beach until the following Monday. It’s like being on vacation all year round, or – to put it another way – “unemployed”.

In a recent AP article, Bernard Condon and Paul Wiseman make a sobering case that technology is wiping out an entire range of middle-class jobs in the service sector.

Condon and Wiseman argue – with lots of convincing economic data – that millions of service-sector jobs, from travel agents to secretaries to accountants – have been eliminated by technology. And they’re never coming back. And it’s just going to get worse.

It’s always been popular knowledge that manual labor jobs like manufacturing line work were at risk for robotic replacement. Robots are cheaper, more reliable, and faster than their human counterparts. They never call in sick, get unhappy with benefits or work conditions, or sue you for job-related injuries. Manufacturing, we understood, suffers a double-whammy. Technology replaces some of the workers, and the human work that remains is outsourced to the developing country with the lowest labor costs. We all understood this – and maybe comforted ourselves with the idea that it would all eventually equalize itself with the transition to a global economy and equalized standard-of-living expectations around the world.

What we weren’t talking or thinking much about was the replacement of employees paid for thinking. But, with the latest generation of technology, that is exactly what is happening. Despite college degrees, many middle-class white-collar employees have been put out of work, just because the world works more efficiently now. If these are smart, resourceful, ambitious people, the stock solution would be for them to “retrain” for new careers. But, retrain for what?

As engineers, we might take some comfort in the prediction that our occupations are the cockroaches of the technocalypse – the only ones that will be left standing after the devastating wave of increased productivity sweeps the Earth, obliterates the global economy, and sends the rest of humanity to stand in breadlines manned by robotic do-gooders.

It won’t go down that way, of course.

The economic equation has a feedback loop (Engineering firing squad ready? Aim your differential equations… Fire!) Obviously, for the fully-automated, zero-employee widgetron factory to stay in business, it needs customers. For now, at least, those customers have to be people – people with purchasing power. That means those people need jobs to earn the money to buy their widgetrons. If humanity as a whole is underemployed, widgetrons will have to get cheaper. That’s OK, because widgetrons don’t cost much to build – not in terms of man-hours, at least. How much cheaper will they get? Almost free, as it turns out…

We already have a huge real-world example of this effect. Software, and in the extreme case – mobile apps – have been in this economic wormhole for several years now. Software is one example of the fully-automated factory. It takes the same number of man-hours to produce, manufacture, and distribute a mobile phone app to one person as it does to deliver that same capability to a billion people. Incremental unit cost is basically zero. The entire cost is non-recurring engineering (NRE). As a result, you can buy a mobile phone app that performs a function that would have once required equipment costing hundreds of dollars – for 99 cents. Now, instead of that capability being available only to people with the resources to invest hundreds in the stand-alone device, that capability is available to anyone who can afford a cup of coffee. Economically speaking, it’s deflation in the extreme.

This is good news, right? Instead of advanced technology being the purview of only the rich and privileged, it can be available to the masses – at a price they can afford. Take the example of smartphones. Because of the massive economy of scale required to make something as advanced as a smartphone in the first place, we have to sell millions of copies of each one in order to come close to break-even. That means we have to make them cheap. Since we made them cheap – just about everybody in the civilized world can afford one. As a result, a remarkable thing has happened. Unlike just about every previous type of product that has existed, the wealthiest people in the world are walking around using exactly the same kind of smartphone that you see in the hands of starving students. On the consumer side, the economics of automated mass-production of extreme technology can virtually erase social class barriers.

What about the supply side, though? All those humans still need something to do with themselves for forty-some hours per week, right? For all of us engineers, it’s easy. Go out and design more computers and robots. Other occupations will fall at varying rates – the number of people required to supervise the robots will gradually decrease as the robots require less supervision. The waters of unemployment will rise – systematically swamping ground with ever-higher levels of human education and expertise. Want to stay dry? Educate yourself and create – every day of your life. Robots and computers will not replace human creativity any time soon. Engineers, artists, musicians – people whose occupations begin with some unique understanding and perspective on the human condition – will remain employed.

Looking at things another way, there are two categories of jobs – those that scale employment with the number of people served, and those that do not. The number of hairdressers required to dress the hair of a million people is a thousand times more than are required to dress the hair of a thousand people. Hairdressing employment scales with the size of the served market.

Jobs like engineering do not scale employment. Designing the clippers to clip the hair of a million people requires the same number of engineers as designing clippers to clip the hair of a thousand… or one. If that engineer can now create clippers that analyze the face of the customer, apply the perfect hairstyle, and eliminate the hairdresser from the equation altogether, he has created something with the value of all the hairdressers it replaced. If he can then engineer those clippers to be so inexpensive that anyone could afford them, he’s taken the whole hairdressing problem off the table. Thanks to him – all humans now have dressed hair. We can move on to the next burning social issue.

(OK, sorry hairdressers. That was a joke, and I acknowledge that hairdressing is an art – and thus not subject to robot replacement under the terms of my earlier paragraph.) However, this does bring up an important point. Technology does not necessarily solve problems in the order of our hierarchy of needs. If it did, food, housing, and healthcare could be downloaded for 99 cents per month and smartphones would be expensive and reserved for the rich. If engineers could magically solve problems in their order of importance, the social picture would be much simpler. For example, in the Western world, we’ve just about got the water problem solved (for now, anyway.) Anybody with the resources to afford shelter also can afford water. In many places, drinking water is available for free on the street in fountains. If other basic needs could follow in the footsteps of water, we’d be debating the flavor of frosting on the cake here.

Yes, technology eliminates jobs. The goal of technology is to make people’s lives easier and better. As engineers, we want to help people achieve the same goals with less work and discomfort. We want to empower humans to accomplish more than ever – with greater safety, less effort, and less discomfort. Because of the inherent feedback in the system, the economic issues will work themselves out. We’ve seen this effect time and time again. The blacksmith profession was annihilated by the rise of the automobile. Humanity adapted and survived. It turns out that shoeing horses wasn’t really all that fun or fulfilling anyway. With the transition will come pain, of course. Evolutionary change in any complex system takes its toll. Those who are most averse to change will suffer the most from that evolution. Those who create that change stand to gain the most.

Be part of that change.