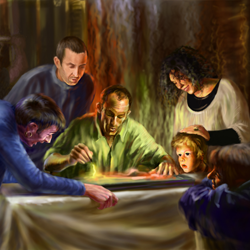 It Doesn’t Matter How Big Your Pen Is

Touch-screen interfaces are all the rage these days. In fact, they’re starting to look like a requirement. Certainly for consumer items like smartphones and tablets, a touch-sensitive interface is mandatory. And with the impending rollout of Windows 8 just days away, soon PCs and laptops will want touch interfaces as well. Point-of-sale terminals, retail kiosks, and industrial applications all want that special touch.

What most of these are missing, though, is the world’s oldest type of hands-on interface: the pen. Or, more accurately, the stylus. New-fangled tablets and smartphones pop up images of a QWERTY keyboard and expect us to type on them. (It’s surprising how quickly millions of adults adapted to the hilariously Lilliputian 2¾-inch keyboard on the iPhone.) But what we really want to do is write. Left-handed, right-handed, or ambidextrous, we’re raised to use a pen, pencil, reed, or pointed stick in one hand. For thousands of generations, that’s what we’ve done.

So why are pen interfaces so rare? Part of the reason is that early ones suc… er, were suboptimal. I loved my original Palm Pilot, but learning to write on it, in one small patch, with every letter atop the other, presented a bit of a learning curve. And Apple’s Newton (remember those?) was infamously erratic at recognizing handwriting—or even telling the difference between then pen and the palm of your hand. So like tablets or laptops, early models of pen-based computers were a bit ahead of their time.

N-Trig figures that time has now come. The Israeli-based company makes a controller chip for touch-screen interfaces that specifically—nay, aggressively—supports pen input along with the more familiar multi-touch finger input. That is, you can use N-Trig’s controller for a finger-only interface (like a current iPad, Nexus, or Surface tablet), or a pen-only interface, or a combination of the two.

The company claims, with some justification, that pen-plus-fingers is really the most natural, comfortable, and effective interface of them all. There are times when you want your fingers and times when you want a tool. Fingers are for control: option buttons, moving objects around on the screen, selecting menu choices, and so on. Pens are for input: drawing, writing, sketching, annotating a PDF, circling a word, etc. For decades, we’ve made do with a mouse pointer for both, but N-Trig reckons that was just a temporary compromise forced on us by limited technology. Nobody actually wants to use a mouse to sign their name or sketch a horse. What we wanted all along was a pen, but the technology couldn’t give us one.

So what’s different now? Part of the secret is granularity. N-Trig’s pen-aware controller resolves with 0.4mm accuracy and 2540 ppi resolution, which results in lines about as small as you could see, leaning up close to the paper. It also has a 133-MHz report rate, so it accurately tracks small motions, rather than (relatively) big jerky movements. The net result is that your writing looks like your writing. Side-by-side photos of traditional pen-on-paper and pen-on-glass signatures look just the same. Indeed, a European court recently ruled that an electronic signature captured this way is legally binding, as it’s biometrically indistinguishable from the real thing. It’s that good.

Another drawback of older pens was the feel; nobody liked the sensation of a plastic pen skating across glass. So to help recreate the old ink-and-vellum experience, N-Trig offers five different pen tips, each one designed to complement a different type of glass or overlay. They’ve even got a weird little robotic test station that rubs the tips over an abrasive surface 24 hours a day to simulate wear rates.

One technical hurdle to dealing with pen input is “palm rejection.” Left-handers, especially, tend to rest their writing hand on the surface while scribbling, and this appears as a huge “input event” to most touch-screen controllers. (Many laptop touch pads suffer from the same problem.) N-Trig thinks it’s solved this problem through firmware; the chip can already distinguish a pen touch from finger touches, but it can also differentiate between ten closely spaced fingers and one carelessly placed palm. The result is that you can rest one hand on the screen, use the fingers of the other hand to tap buttons, and still write legibly.

Although the device, adorably dubbed DS-P4096, is programmable, it’s not user-programmable. What the developer sees is a 153-ball BGA with an I2C, SPI, or USB interface. The chip emits a stream of serial data that includes quite a bit of detail: obvious things like the X/Y coordinates of fingers and pens, but also “hover events” if a pen is slightly above the surface of the screen; the ellipse traced by multiple fingers (from which it can infer a right- or left-handed touch); pen pressure (in 256 levels); and even the serial number of the pen (which includes active circuitry). This last detail is useful for enabling different “colored” pens, like electronic crayons, or for recognizing different users by their pens. It could even be used for security applications, where pens are assigned to certain users, who must then enter a password and/or signature. The pen could effectively replace USB keys as security tokens.

So it’s all come down to this. After 10,000 years of scratching on stone tablets or pounding reeds into papyrus (the source of our word “paper”), we’re now e-writing on glass using electronic pens governed by multimillion-transistor sensing devices. It’s taken the electronics industry about 50 years to get us back to writing the way we used to. With N-Trig’s help, we may all discover that a tablet with its own pen is handy to have around.

Image above drawn with the N-Trig pen by Misha Lapitskiy