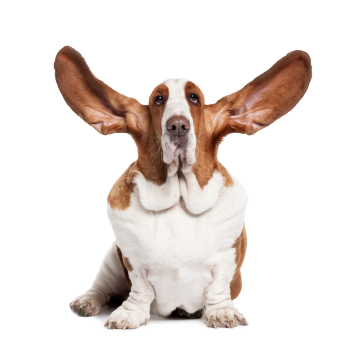 Let’s say you’re going to a rock concert that you know is being recorded for a live album. OK, live CD. No, never mind, a live MP3. (Who needs all those highs and lows anyway?) Of course you know that the instruments will be miked. And not just with one big-ol’ sensitive mike; each instrument (well, the ones that aren’t direct plug-in, anyway) and voice will have its own mike allowing the channels to be mixed and balanced both at the show and afterwards in post-production.

You might also find mikes hanging over the audience. And the natural assumption would be that this allows the producers to blend in more crowd reaction for that extra-live feeling.

But is that really what it’s for?

What if the producers find that, due to the acoustics of the room or the way the stage mikes are set up, there is already too much crowd noise muddying up the music? Then a separate crowd channel could be used to subtract out crowd noise (assuming that the crowd mikes aren’t zeroing in too specifically on the individuals they’re near – perhaps multiple crowd mikes could be averaged and blended). With that separate channel, the producer would have full flexibility to add a little, add a lot, or subtract a little or a lot, kind of like a vintner adjusting a wine for balance with different grapes.

This principle is being used in much simpler audio environments, like cellphones. You’re probably used to the microphone down near where your mouth is. But did you know there might be another microphone on the back of the unit as well? That can record the ambient environment, which can be subtracted from what the voice mike picks up so that the voice signal is clearer. And, rather than a producer playing with it afterwards, it happens in real time.

In fact, as microphones shrink and become less expensive, there’s a move to having multiple mikes to improve the quality of the sound they pick up. It’s sort of like the MIMO principle (or “diversity”) used with antennas – multiple signals can be blended for better fidelity.

This is a market that Akustica (now part of Bosch) is addressing with their recently-announced new analog two-chip mike. (More on the analog and two-chip bits in a minute.) They note a number of different scenarios in which microphones have to work reliably:

For shrinking a microphone down until it’s small enough to fit multiple units on a phone, MEMS is the obvious choice. And MEMS mikes are a growing piece of the mini-sensor marketplace.

Akustica already has a single-chip digital MEMS phone. It takes advantage of their ability to place MEMS and CMOS on the same chip; they put them side-by-side (rather than MEMS-over-CMOS). Such integration seems like the way of the future, and yet not all MEMS manufacturers are moving in that direction. In some cases, it’s actually cheaper to manufacture two chips separately and then bond them together.

In this particular case, Akustica has violated not only the integration trend, but also the trend towards making everything (or as much as possible) digital instead of analog. This new microphone is not digital.

One of the main reasons they give is that the cellphone market is used to analog mikes, unlike the laptop market that uses their older integrated digital chip. For one thing, they’re cheaper, so anything that helps to reduce the phone BOM will be appreciated. The other factor is the familiar interface and manufacturers’ inherent reluctance to change (a bit ironic, given the massive changes that have happened to phones, but perhaps that’s even more reason to resist changes in components where change doesn’t bring much new to the market).

The next assumption would be that, since they’re going with analog circuitry, the circuitry would be too sensitive to host MEMS as well on a single die. That’s apparently not true. So the real motivation for having a two-chip solution is not so obvious; they do say that this gives them more flexibility to pair up the MEMS chip with different interfaces – analog or digital – as the market demands. But it also makes me wonder whether it’s simply a matter of what their fabs can do: the integrated CMOS came from the Akustica side; the new analog mike comes from the Bosch side.

The other bit they tout is the new package with a metal lid. This feels almost like a third throw-back since so much has moved to plastic wherever possible. But the metal lid makes sense: it acts as a shield over the analog chip, protecting it from stray signals. Where would these signals come from? Oh, how about that antenna a few centimeters (or less) away? In fact, Akustica notes that microphones are actually late to this move towards metal-lid packaging.

Put all of this together, and who knows? Maybe we’ll have a crowdsourcing album produced by people recording the concert with their cellphones from all over the auditorium. They’ll then be able to upload to a site where the recordings from each phone can be blended to reinforce the music and unreinforce the crowd. Of course, that would require a reversal of the roles of the two mikes on the phone: if you’re recording video as well, then the mike facing the music would be receiving the main sound signal, and the normal mouth mike would be facing the rear of the auditorium, getting the audience sound. But hey, there’s probably someone somewhere (like in the FBI) that would know how to bring that all together and create a high-fidelity album of the people, by the people, for the people.

No, wait… if the FBI were doing it, they would squelch the music in the hopes of identifying drug deals going on in the crowd… never mind.

One thought on “More Ears for Better Sound”