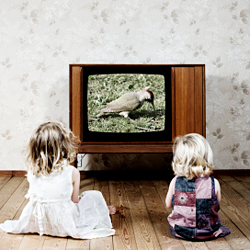 Viddy This, O My Brothers

iPhone not powerful enough? BlackBerry looking a bit sluggish? Palm Pré just doesn’t have that kick you need? Then hang onto your tights because a new killer cell-phone processor is on its way.

These days, the phone is the least interesting part of a cell “phone.” It’s the camera, the applications, the GPS location-based services, the battery life, the user interface, the wireless networking, and (in all too many cases) the color of the plastic that make or break the product. Making calls on your cell phone? What a quaint idea.

That being the case, it’s important for cell-phone designers and manufacturers to keep up with the latest in processor and multimedia technology. Multi-megapixel still cameras in a phone are no longer remarkable; they’re expected. Video playback is mandatory. Live video recording is no big deal. And the ability to squirt all this video over one or more wireless networks (not necessarily the telephony network) is also de rigueur.

The phone is the easy part. It’s the video processing that’s tough on engineers. How do you fit all that into a handheld device, make it all work on battery power, and not have the unit melt itself or its owner’s hands?

Well, if you’re in Barcelona this week and your business card says CEVA on it, you may already know the answer. CEVA has just pulled the wraps off the melodiously named MM3000, a ground-pounding processor platform for high-end cell phones. Or really, for consumer video decks with a cellular interface on them.

Not familiar with CEVA? For shame. The company is like the ARM or MIPS of the DSP world, licensing DSP-processor cores to ASIC designers and chipmakers all over the world. The company was formed from the unlikely amalgam of Irish firm Parthus, American company DSP Group, and Israeli concern CEVA. After calling itself ParthusCEVA for awhile, it’s since trimmed its moniker to just CEVA. The Irish-American-Israeli company employs about 180 worldwide.

These dedicated souls design DSP cores large and small for a variety of clients. From the older Oak, Pine, and Teak DSPs up to the company’s more modern (though less rustically named) X1641 and XC cores, CEVA has its DSPs in everything from disk drives to consumer electronics to automobiles – and cell phones. Lots and lots of cell phones.

On the back of that experience, and knowing that media processing will likely be the big differentiator in its favorite market, the company pulled out all the stops to come up with the MM3000. It’s a dual-core “platform,” meaning it includes processors, peripherals, software, design files, and just about anything an ambitious cell-phone maker would need to encapsulate all this goodness into one handheld device.

At its heart the MM3000 is a pair of processors: one stream processor and one vector processor. Both are roughly equal in performance and ability, though they’re tuned for very different tasks and meant to work cooperatively. The stream processor is a 6-slot VLIW/SIMD machine (for the acronymically challenged, that’s a very long instruction word, single-instruction, multiple-data architecture) with four execution units. Just tell your mom it’s fast.

Both processors are found in a single MM3000 “platform,” along with a shared bus, DMA, and hardware task scheduler. In the future, CEVA can develop different MM3000 configurations that might have, say, two of each type of processor. But let’s not get ahead of ourselves.

The Two Heads of Janus

In its standard two-headed configuration, the MM3000 can happily decode any type of video known to man, including H.264, Flash, DivX, MPEG-4, VC-1, AVS, RealVideo, and more. What’s more interesting is that it can decode these at up to 1080p resolution at 30 or even 60 frames/second. In short, it’s your new flat-screen HDTV in your hand.

Oh, and it can encode these video formats at 1080p, too. Which means the MM3000 makes YouTube videos as easily as it plays them. It seems almost shameful to call this a cell phone processor. Remarkably, all this heavy lifting is done on a DSP processor: a programmable chip running software, not some hard-wired codec. So future video standards, applications, DRM formats, and other ephemera could be supported with software changes over time. As Darth Vader might say, most impressive.

Naturally, CEVA will have software-development tools for the MM3000 when it becomes available for licensing. The company will also offer a fairly deep library of software codecs to perform all the tricks mentioned above, although that software won’t be free. You’re welcome to develop your own code, but something tells me most MM3000 developers will opt for the CEVA-supplied software.

Since CEVA doesn’t make chips, we’ll have to wait for its licensees to produce product, and that’s probably more than a year away. The MM3000 design files are just about ready for release, which means licensees late this year, prototype chips sometime in 2011, and cool new cell phones in 2012. Make out your Christmas lists now.

In the meantime, there’s a cool demo board you can play with. At this week’s Mobile World Congress, CEVA showed off an FPGA implementation of the MM3000 running in a big Altera device. Even plodding along at just 75 MHz (the best speed they could squeeze out of an FPGA implementation), the demo chip decodes H.264 BP video at 720p resolution and 24 frames/second. Not bad. CEVA representatives say it could do 1080p if only they could crank the clock speed up to about 250 MHz. There’s no video encoding in the demo; that comes later.

Clearly the MM3000 is meant to add serious video processing to not-so-serious products like cell phones, portable game players, and other modern gadgetry. It’s a piece of enabling technology that will take us one step closer to all video everywhere, all the time. That’s a pretty interesting concept with all sorts of implications for consumer electronics, entertainment, broadcasting, citizen journalism, security, and privacy. Not to mention wireless bandwidth and storage. Where will we put all the pointless videos we send to each other at lunchtime?

As in A Clockwork Orange, we may be inundated with so much video it makes us ill. At least there’s no danger future archeologists won’t know what we looked like or did with our time. So what’s in your wallet?