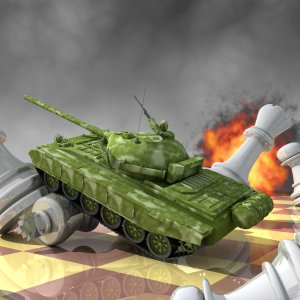 War is invoked ad nauseum in the discussion of marketing. Partly because there are a lot of legitimate parallels. And partly because war reeks of testosterone and gives us a quick sharp adrenaline boost. This is in contrast to the cold, clammy, creepy feeling evoked by the word “marketing.” One influential book, “Marketing Warfare” by Ries and Trout, defines four kinds of marketing: offensive, defensive, flanking, and guerilla. Summarized, defensive is for the big guys that are too slow and dull to do anything innovative except use their oversized derrières to block someone getting too close to their space; flanking is for clever strategists that can exploit some way around the big guy and tie his shoelaces when he’s not looking; and guerilla is an ADD approach that lets tactical geniuses get all jacked up on Mountain Dew and stomp on a toe and then bite an ankle and then tickle a calf, keeping the behemoth confused, off balance, and unable to respond effectively.

Offensive marketing, while occasionally successful, is often depicted as being for the big, clueless oaf who can’t compute the fact that he’s outmuscled, and who goes charging headlong into his far larger opponent, bounces off (with the big guy maybe noticing, maybe not), shakes his dazed head, backs up, and charges again. And again. It is reputed to lack elegance and subtlety. And as a result we don’t see it so often. At least not openly. Everyone positions, spins, changes the rules, whatever the latest buzzphrase is from the latest buzzbook that one must to quote endlessly in order to show that one is built to last and has the right stuff to cross the chasm. But might it be a mistake to assume that any offensive approach will be so dunderheaded?

Well folks, pay attention, cuz we have us a real-deal too-legit-to-quit unapologetic offensive marketing campaign starting up as Synopsys heads straight on for Cadence in the world of custom AMS IC design. Although the press release makes no specific mention of it (translate “legacy” into “Cadence”), it’s not disguised or nuanced in the slightest: Cadence’s Virtuoso has a strong incumbent’s position in this space, and Synopsys’s new Custom Designer tool, integrated into the Galaxy platform, is gunning straight for it. Yes, Magma also has entered this market, but it was only recently; yes, Mentor also plays here but hasn’t gotten the traction that Cadence has; so for now, Cadence is where the money is.

Making it easy to change sides

In fact, some of Cadence’s own weaponry was used in this adventure: apparently, over time, the Synopsys development and marketing teams managed to accrete a non-trivial number of contributors from the Cadence ranks, so the development was not likely done in ignorance of the competition. And the new tools were developed from the ground up specifically to make it easy to lure away Virtuoso users. This compatibility is evident in three areas: the database, the flow, and scripting (to the extent possible).

The first and most obvious way to acquire Cadence designs is to use a compatible database, which they have done. They’re using the open standard OpenAccess (OA) database, which Cadence supports, meaning that designs can move over into the Synopsys world more or less easily. (Call me gun-shy about being too liberal with the word “easy” in the EDA space.)

Synopsys is treading a fine marketing line here with the use of OA only for the AMS portion of an SoC. Not for the digital portion, which continues to use their proprietary MilkyWay database. While the MilkyWay database doesn’t contain the specific analog design details, it is aware of the existence of the analog blocks: it contains “abstracts” of the analog portions – essentially pointers with a description. So it’s not like the two databases are in complete mutual isolation, but there is no one single place where the entire design resides.

Much has been made of the benefit of a single database to avoid having to shuttle massive volumes of data back and forth, but Synopsys is finessing this issue by focusing on the issue of “data flow” or “data management” as being more important than databases. In other words, as long as it isn’t too hard or doesn’t take too long to manage two databases, it doesn’t matter. Seems a bit of a delicate dance, since “openness” is touted as a good thing in the OA database – as long as that openness is admitting lots of eager new users into the fold. Moving entirely to an open database – including the digital stuff they’re already strong in – is presumably less beneficial to Synopsys, since what comes in can also go out. [Note to self: invent some kind of diode for open systems.] They’ve essentially tried to blunt one edge of the double-edged sword.

The second way of encouraging adoption by Cadence users is by adopting the Cadence flow, at least in the big picture. They intentionally turned aside use models that in theory might be easier for design simply because, in the real world, no one wants to go through a long learning curve. That doesn’t mean that they’ve copied the Cadence user interface outright; they are emphasizing the fact that, while the flow is the same, they require fewer keystrokes to get things done. For example, they support what they call “on-canvas editing”: to change a portion of the design, rather than popping up menus and entering numbers, you just click and edit on the design itself. It’s this combination of familiar overall flow with higher productivity that they’re hoping will be attractive to longtime Virtuoso users.

The third area of compatibility is that of scripts, where possible. Cadence has their own proprietary scripting language called SKILL, and SKILL scripts can’t be used in the Synopsys environment. But Cadence also supports TCL and Python, and any such scripts can be brought directly over. Python seems to play primarily in the parameterization of low-level P-cells and in Process Development Kits (PDKs) in an effort to reduce the redundant foundry work required to support all the tools vendors with good models. TCL plays much more broadly in automating tools and flows and is pretty much a required feature for any serious EDA tool.

Synopsys isn’t looking to create a new solo point tool for AMS custom design; it’s got to play nice with the other critical elements required in an SoC. So you design your analog blocks in Custom Designer (SE for schematic editing, LE for layout editing) using the OA database, and you do the digital design in Design Compiler (RTL) and IC Compiler (layout) using the MilkyWay database.

It sounds like the shuttling back and forth between the custom and digital sections is kinda manual, but it can be automated through TCL scripting – by the user for now, and under the hood in the future.

Full SoC integration takes place on the IC Compiler side of things, so the “digital” side of the divide becomes the master in the end. However, the finishing details, like the scribe lines or logo or designer signatures or that little devil picture that somehow ended up on the die, are all done in Custom Designer, and those structures are brought back over into IC Compiler.

The one area where everyone seems to be concerned about having to go back and forth between the digital and custom sides is right at the very end when a few routes need to be tweaked here or there. This could get bogged down if you had to do it in Custom Designer and then ship the results from the OA database back to the MilkyWay database. Synopsys has solved that issue by allowing routes to be edited in IC Compiler even if the route was created on the analog side.

There are a few terms and ideas floating through all of this that are conveniently being considered synonymous when, in fact, the apparent synonymy is an artifact of history. You’ll notice that “custom” and “analog” or “AMS” are pretty much used interchangeably. Well, in fact, in theory there’s nothing inherently more or less custom about analog than about digital; it’s just that the digital world has been approached very differently.

Digital design takes advantage of synthesizable RTL and standard cells. By writing behavioral descriptions in a suitable fashion, a high-level description of a design can be reduced to a passable layout with minimal manual intervention. Hence it’s not custom. Well, unless you’re Intel, in which case you can afford to have each transistor lovingly polished by one of a horde of designers.

The stuff that can’t be done this way has to be done in a custom fashion. And most of that stuff happens to be analog; hence the equating of custom and analog. RTL is being extended to admit analog, but that’s only for modeling and simulation; there’s no synthesizable analog RTL. (Yet.) Analog is a world of schematics, and it looks decidedly old-school as a result. So the thing separating analog and digital is synthesis – and analog synthesis remains something of a holy grail. If that can be accomplished, then analog will no longer be a uniquely custom proposition.

The other methodological difference is the use of standard cells for “standard” logic, and there are no analog standard cells. (Yet.) Analog IP is becoming more and more important, however, and by coupling the IP with scripting or even the use of a C++ interface (which exists in the current Custom Designer release, but is hidden and will be productized later) you can start to think in terms of analog standard cells. There might be some detailed differences, but in the abstract, you start to lose that distinction between the two sides. So in the future, just as you can have standard digital and custom digital today, you may be able to have standard analog and custom analog in the future. All of which is to say, the concepts of “analog” and “custom” need not be forever intertwined.

Pedantic musings on obscure semantics aside, Synopsys has clearly thrown down a serious gauntlet at Cadence. To the extent that gauntlets can be serious or silly. Will taunts be shouted? Will cows be launched? Will things be waved in the faces of innocent aunties? It will be exceedingly interesting to see whether Cadence finds this campaign to be offensive and which marketing strategies they employ in their defense.