We’ve heard about the role of the Cloud in the Internet of Things (IoT). It’s analytics and other decision-making that happens in some remote server farm somewhere to serve some “edge-node” device connected over the internet. And you’ve probably heard of the variant on that called the “fog,” where some of that computing is done on a machine local to the edge node, reducing communication traffic and latency.

But… did you know that there are two flavors of fog? And that this actually has an analog in the IoT?

San Francisco is famous as a foggy city, but, unless it’s really bad, the fog doesn’t actually hit the ground. It’s generated by the “marine layer,” coming in off of the cold ocean waters. It’s the West Coast version of the East Coast’s humidity – with no warm Gulf Stream. Newcomers will sometimes look up during a typical San Fran foggy day and wonder, “Why do you call this fog? It’s just cloudy.” (Until you get to a hill or the Outer Richmond, anyway.)

What most people are used to is ground fog (also locally called tule – “too-lee” – fog , named after a prevalent form of bulrush in the local delta from which the fog might seem to arise). Because ground fog originates with moisture on the ground, it never seems simply cloudy. It’s always all the way down; the only question is how high it rises. (And how thick it is…)

So on the one hand, we have a type of fog that might appear to be higher up, with a tendency to descend towards the ground, versus one that starts at the ground and then rises up. This distinction came to me based on a discussion with Olea Sensor Networks during the June Sensors Expo. (They came up in my prior discussion on interoperability.)

They write custom analytics code for IoT devices. In the classic IoT model, such analytics would be performed in the Cloud – with perhaps some offloading into a local machine. This descent of analytics from on high might resemble the San Francisco marine-layer type of fog, where it mostly seems like clouds until it descends.

But Olea noted that they mostly don’t see analytics happening in the Cloud – at least not so far. The analytics they write execute on the edge node devices themselves – and perhaps in other local servers and gateways. But definitely on the local side of things, not the Cloud. So here the fog is rising from the ground up. 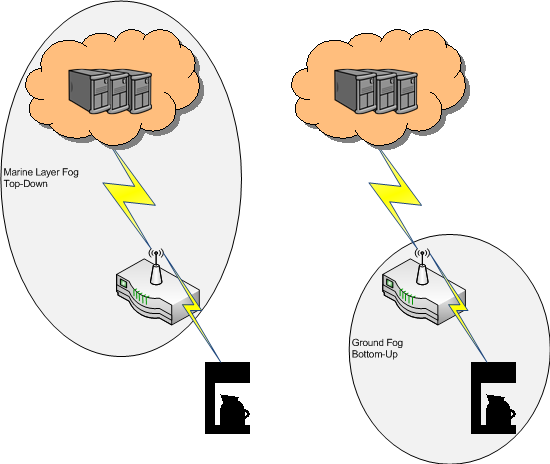 Of course, as I’ve noted before, we’re in early stages of IoT build-out, with many folks struggling simply to make their phones work as remote controls – never mind the analytics. So this could be a transitory phase. But where you place the analytics has obvious implications for the resources needed on your edge-node device. Which has implications for cost.

What this also suggests is that current analytics functions are relying solely on data from the one device or perhaps from a few local devices that have access to the same server or gateway. Which probably also reflects the youth of the IoT.

At the point when more architects take advantage of data available only through the internet – things like social media feeds, perhaps map feeds, etc. – and work them into the analytics, then the Cloud may be a better place to bring all of that together. Likewise when combining data from edge nodes that are not collocated.

At which point, some tornado will come along and suck it all up into the Cloud.