I don’t know about you, but when I hear “Spansion,” I hear memory. But there’s more going on there these days than FLASH. I talked with them last November when they were exhibiting at the IDTechEx show, which is partly about energy harvesting.

In particular, they acquired Fujitsu Microelectronics a year or so prior to broaden their product line. What they got were microcontrollers, with lots of digital and analog connectivity, and analog – primarily power management ICs (PMICs).

With this, they’re gunning for the internet of things (IoT). Surprise! Bet you didn’t see that coming… But they think that batteries are slowing adoption of IoT technology due to their need for low voltages and currents.

So their contribution to this situation is a couple of PMICs for energy harvesting – one is buck (drops in the incoming voltage); the other is boost (although it can drop voltage too if both needed). 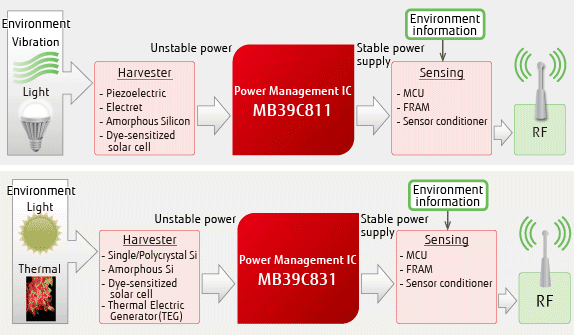 The MB39C811 is targeted at regulating the voltages generated by solar (dye-sensitized cell and amorphous silicon) and vibrations (through piezoelectric or electret harvesters). The MB39C831 targets all solar as well as thermal harvesting.

They also have a simulator they call EasyDesign for configuring the energy harvesting module. Based on the needs of the node being powered, it can help determine, for example, how big a solar array is needed, and what the follow-on circuits should look like.

You can find more on their energy-harvesting PMIC page…