Some time back we briefly introduced Elliptic Labs’ ultrasound-based gesture technology. They’ve added a new… layer to it, shall we say, so we’ll dig in a bit deeper here.

This technology is partially predicated on the fact that Knowles microphones, which are currently dominant, can sense part of the ultrasonic range. That means you don’t necessarily need a separate microphone to include an ultrasound gesture system (good for the BOM). But you do need to add ultrasound transmitters, which emit the ranging signal. They do their signal processing on a DSP hub, not on the application processor (AP) – important, since this is an always-on technology.

With that in place, they’ve had more or less a standard gesture technology, just based on a different physical phenomenon. They see particular advantage for operation in low light (where a camera may be blind), full sun (which can also blind a camera), and where power is an issue: they claim to use 1/100th the power of a camera-based gesture system. So… wearables, anything always-on. As long as you don’t need the resolution of a camera (which, apparently, they don’t for the way they do gestures), this competes with light-based approaches. 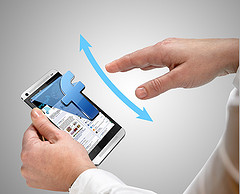 What they’ve just announced is the addition of a 3rd dimension: what they’re calling multi-layer interaction (MLI). It’s not just the gesture you perform, but how far away from the screen you perform it. Or what angle you are from the screen.

For instance, starting from far away, with your hand approaching, at one point it would wake up. Come in further and it will go to the calendar; further still takes you to messages; and finally on to email. Of course, Elliptic Labs doesn’t define the semantics of the gestures and positions; an equipment maker or application writer would do that.

And it strikes me that, while this adds – literally – a new dimension to the interface, the semantic architecture will be critical so that users don’t have to mentally map out the 3D space in front of their screen to remember where to go for what. There will have to be a natural progression so that it will be “obvious.” For example, if you’re gotten to the point of email, then perhaps it will show the list of emails, you can raise and lower your hand to scroll, and then go in deeper to open a selected email. Such a progression would be intuitive (although I use that word advisedly).

A bad design might force a user to memorize that 1 ft out at 30 degrees left means email and at 30 degrees right means calendar and you open Excel with 90 degrees (straight out) 2 ft away and… and… A random assignment of what’s where that has to be memorized would seem to be an unfortunate design. (And, like all gesture technologies, care has to be taken to avoid major oopses…)

You can also turn it off with a simple gesture so that, for example, if you’re on your phone gesticulating wildly, you don’t inadvertently do something regrettable in the heat of phone passion. Or in case you simply find it annoying.