A Paper Battery… Not

Today’s note comes from the Department of Not What It Sounds Like. It’s about a company called Paper Battery, which doesn’t make batteries, and, what it does make isn’t made out of paper. The burdens of old names that stick…

What they do make is a supercapacitor. We’ve talked about supercaps before; there’s nothing revolutionary in concept. The story with PBC (much less confusing company name as an acronym… but don’t confuse it with PCB) is about their form factor: thin (0.3 mm) and flat. They can be, for instance, added as a “layer” over a battery to provide a combined battery/supercap “bundle” that has much more stable voltage. 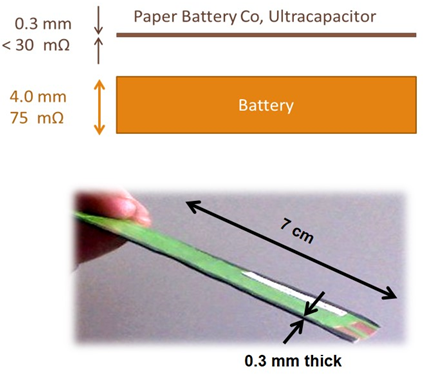 The idea here is that such a flat component can be spread out in ways that use less space than explicit components that need their own plot of PCB. But the spatial efficiencies come with specific extra benefits, both electrical and thermal. As a layer or “wrap,” these supercaps can provide electromagnetic shielding; they can also act as head spreaders, helping wick away heat from hot spots that they might cover or underlie.

In the future, you could see multiple caps and voltages, paving the way for better DC/DC converters.

They say they have the technology sorted, but they’re optimizing for higher-volume manufacturing. In a few months they’ll make the decision to use either a contract manufacturer or to build a fab. If they roll their own, they say that it would be 12-16 months from now when they went live; they could get a contract guy going 3-4 months faster.

You can find more on their site.