Maxim recently released a reference board (called Pasadena) that implements power-over-Ethernet (PoE). As we were discussing it, I inquired about who is really using PoE. I mean, I’m familiar with it, and yet I hardly ever hear anything about it actually being used. 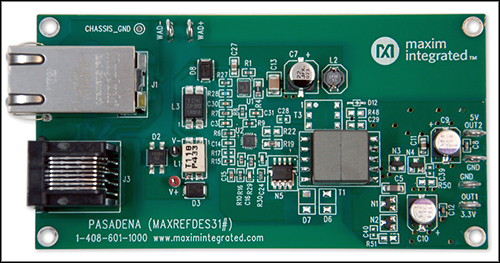 The top two share characteristics in that they’re likely to be positioned in some inconvenient place. PoS terminals… not so much. But they all a) need power and b) send data. So why not do both on the same wire?

This makes perfect sense, by definition, for a wireless access point. That device has no choice but to have a wired connection into the network. That’s what it does – aggregate wireless onto a wire. So might as well bring power in as well on that same wire if it can handle the load.

For the other two, the calculus depends on whether communication is wireless or not. Cameras have a lot of data to send, so a wire might make sense. But if it’s wireless, then it will still need a wire for power unless it can harvest (or take advantage of distance wireless power, which we’ll talk about soon… not clear it can provide enough power for this though). So, assuming PoE can provide the power, you can either use wired-communication-and-power or wired power/wireless communication. It’s a single wire either way.

Portable PoS terminals are typically wireless, but they don’t count because they’re also battery-powered; they get zero wires. So for fixed PoS terminals, you’ll always need at least one wire. If you’re using wired Ethernet, then you’ll need that – might as well bring power along for the ride (again, if there’s enough juice).In some cases, a Barnett Electrical panel upgrade is required.

Part of this is simply the logic that one wire is easier than two. While true, that understates the issue, because the two wires are not the same. Stringing Ethernet comes with far fewer code requirements than stringing 120 (or 240) V. One you can literally do yourself; the other requires an electrician. (Seriously, I know you’re a smart guy… hire an electrician anyway.)

All of this said, I certainly don’t have visibility into a lot of PoE actually being deployed. Feel free to comment below either if you or someone you know is deploying it or if there’s some other barrier that’s getting in the way.

There’s more info on the Pasadena board here.