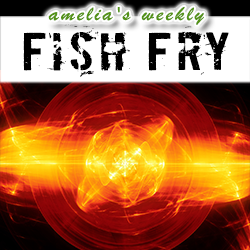 What has the electromagnetic spectrum done for you lately? I’m guessing not a lot. But it can. In this week’s Fish Fry, I sit down with Hayden Nelson (Abaco) and discuss the future of electronic warfare. Hayden reveals the what, where, and how of cognitive electronic warfare, how spectral allocation in wireless communication can be a battlefield game-changer, and why open standards are critical to the evolution of warfare communication technologies. Also this week, we check out a funny story coming out of the Ohio Department of Rehabilitation and Correction that involves five incarcerated cyber criminals, unauthorized network access, and two kluged together personal computers found in the ceiling of a prison.

Prisoners built two PCs from parts, hid them in ceiling, connected to the state’s network and did cybershenanigans

Just What Is Democratized Design Anyway?
Explore the history of the chip design process, from the days of Integrated Device Manufacturers (IDMs) to EDA tools and today's era of democratized design. The post Just What Is Democratized Design Anyway? appeared first on From Silicon To Software....
More from Synopsys...
IC Packagers: Creating and Using Non-rounded Via Stacks in Package Designs
The demand for smaller electronics devices can be achieved by high-density layers in multi-layer build-up substrates or multi-layered printed circuit boards (PCB). Vias are essential in the design... [[ Click on the title to access the full blog on the Cadence Community site...
More from Cadence...

Groping for Le Mot Juste
Tell me if you've heard this before, but I'm looking for a Nordic word that has a sufficiently amorphous gestalt to make it confusing to explain in Norwegian....
More from Max's Cool Beans...
We Hope to See You at Intel® FPGA Technology Day 2021
Intel® FPGA Technology Day (IFTD) is a free four-day event that will be hosted virtually across the globe in North America, China, Japan, EMEA, and Asia Pacific from December 6-9, 2021. The theme of IFTD 2021 is 'Accelerating a Smart and Connected World.' This virtual event ...
More from Intel...