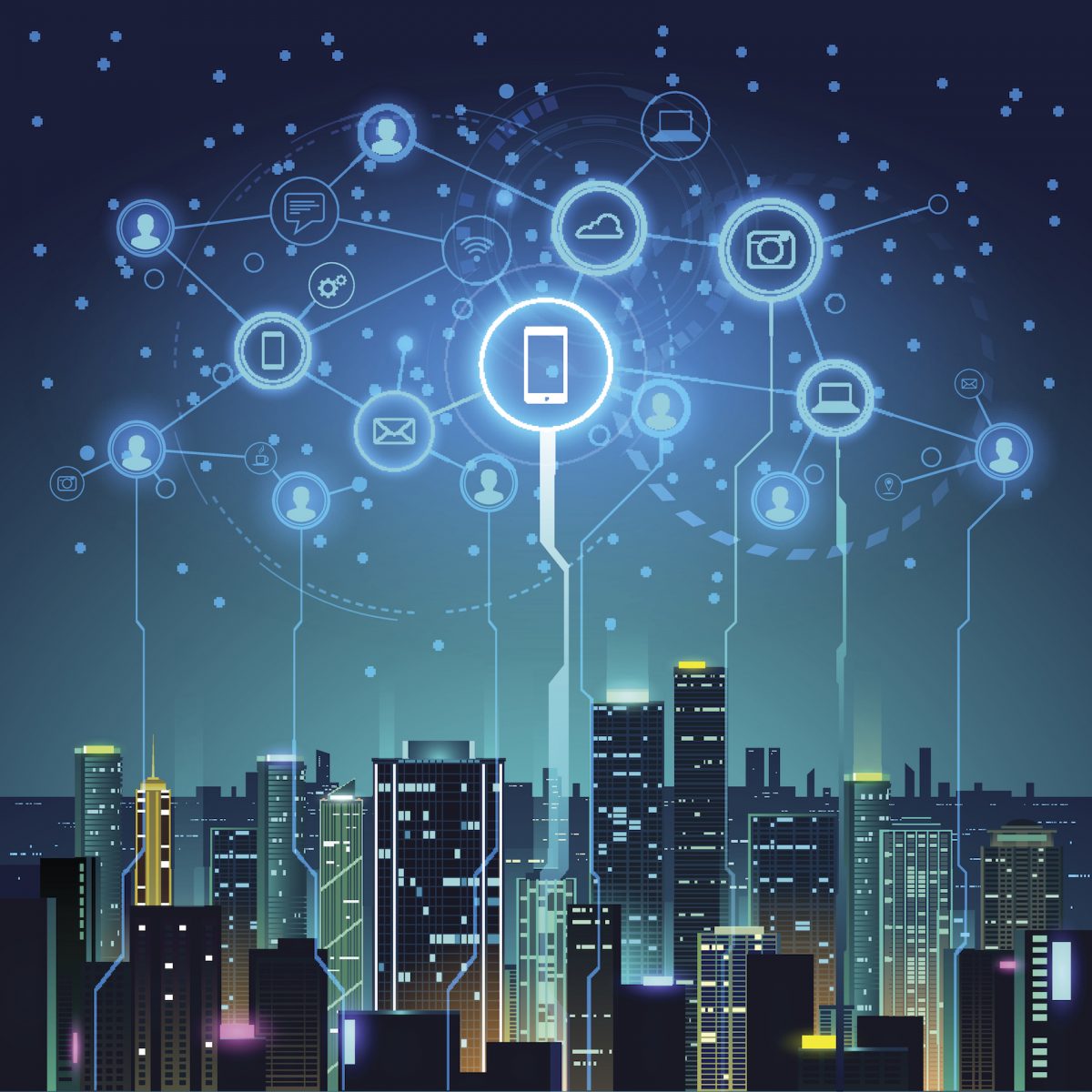 What Is a Smart City?

Imec’s Living Labs Project May Tell Us
by Bryon Moyer

What do you think of when you hear the term “Smart Cities”? Parking apps? Lighting with sensors? Both of those are certainly part of the picture, but, in Europe, the entire picture could go far beyond those applications.

Through a presentation at an Imec event adjacent to their recent ITF event in Antwerp, and bolstered by a conversation with Imec’s John Baekelmans, I saw a far more expansive vision than I’ve seen laid out before. It’s not just about city services; it’s also about promoting business – while trying to balance privacy concerns.

Imec and its partners are engaging in a process they refer to as a “living lab.” They’re starting small and learning the process, piecing together what they call a platform that can work elsewhere. But a key aspect of this is that you can’t assume that two cities are going to want the same thing. So, while they hope that 80% of what they learn in the early days might be transferable from city to city, each city still needs to be able to set a direction and the priorities that feel right for it.

As a result, this platform isn’t necessarily a set of “here’s a bunch of things to do,” with room left for customization. It’s really more of a decision tree – and therein lies the customization. Each city will answer questions according to its needs, and, from there, services can be built.
This Smart Cities thing is seeing growing investment. According to Pike Research data presented by Joyn’s Frank Bekkers, this area will attract $108 billion by 2020. The challenge is to get the most out of those investments.

They’re starting locally. You may have heard about Eindhoven in the Netherlands (near which Imec has a presence) having done some smart-city stuff. That turns out to be unrelated to this project. This new effort is being done not at the city level, but regionally. Antwerp is at the heart of the first project, but it encompasses a more holistic Flanders solution (Flanders being the Dutch-speaking – or, technically, Flemish-speaking – northern part of Belgium, as contrasted with Wallonia, the other portion where the French-speaking Walloons live).

The approach shuns heavy-handed prescriptive plans handed down from on high. The idea is to include not only the input of the city and regional governing bodies, but also average citizens. A messier process, no doubt, but, if done right, one that will result in services that are readily used and appreciated.
And that leaving-room-for-local-differences thing isn’t just about the overall acceptance of the program by the populace. Politics enters here as well. Apparently, town mayors need to be able to have a strong say so that they can claim credit for good results – especially when it comes to promoting local business.

What kinds of services might these be? Imec presented a graphic that illustrated the following possible aspects:

I can imagine that the restaurant item could be extended to many types of retail, inquiring on inventory and saving a trip if what you want isn’t in stock. These things would be useful for local residents, but they could also be particularly popular with tourists that don’t have a sense of the local scene.
That said, it does favor the better-financed larger companies over what might be less tech-savvy mom-n-pop joints. But that’s pretty much like it is today. How many times have you looked online for a hotel in a small town and found maybe one or two? And when you get there, you realize there are a lot more – they’re just not online or not affiliated with the search company you used?

This raises two important questions: how is this going to be financed, and what about the data and privacy? Let’s take them in order.

The previous header notwithstanding, a European launch obviously isn‘t going to be about dollars. It’s just that “euro” (or “pound” or “kroner” or whatever) isn’t alliterative with “data.” But financing is always a tough game for towns and cities, since they always have budget problems.
For the most part, the available services should, in the final analysis, be beneficial to the local economy. That could be because of better business patronage, resulting in higher business incomes and the resulting taxes they pay. Or it could be because of gained efficiencies and, ultimately, savings, as it becomes possible to do things less expensively – or even making economically viable that which couldn’t be done before.

That said, this is one of those “build it first and earn the payoff later” things. Meaning that someone has to fund the initial development – tough to do for cities with bare-bones budgets. That’s where private/public collaboration may turn out to provide the key.

If a private company can fund a service, then perhaps it can charge for that service to earn a return on the investment. Outfitting bus stops with sensors, for example, might result both in data about how many people are waiting, and possibly also in data about who is waiting (not necessarily by name, but perhaps by membership in some data group). This could be used for – you guessed it – customizing the ads on the bus shelter; more on that in a moment.

The public/private aspect has a different character in Europe, where, according to Mr. Baekelmans, much of the land under retail spaces is owned not by developers or private landlords, but by the city itself.
Now, about that data: Bear in mind that this is all a work in progress, so no formal policies have been put into place – especially in this area. Mr. Baekelmans said that, to date, selling data to advertisers has not been part of the solution. Not that it couldn’t be in the future, but, unlike so much other Internet of Things work, that doesn’t seem to be a primary motive.

Central to the issue is the following question: Who owns the data generated from sensors on city property? In that bus shelter application, which was hypothetically funded by a private company with the ability to advertise, does the contract give ultimate data ownership to the city or to the private company?

Obviously, for any given city doing a deal with a co-investor like this, they can make the decision in whichever direction they deem best. But we don’t yet have a history of experience that suggests which way will become one of the “best practices” for cities getting a later start.
Concern over data usage is high: as high as 88%, according to a survey of roughly 750 cited by Imec. That said, 63% of people were willing to share data. But there’s some nuance to that: it turns out that people are more willing to share contextual data – their location, for example – than they are to share actual content from, for example, social media posts. So it’s not about luddites simply refusing to join the future; it’s people willing to move forward, but cautious to ensure that their privacy doesn’t get trampled in the process.

And in an environment that could conceivably outdo anything Big Brother might have envisioned, with every move tracked by something, privacy can become an easy casualty if it’s not balanced properly. The presentations that I saw had a strong focus on the privacy aspect, so they would seem to be taking this seriously.

In general, they model the technology for such a system with four layers: hardware at the bottom, then network, data, and application layers. Orthogonal to those are a management piece and a piece dedicated to “privacy, ethics, trust, and security,” or PETS. So privacy – and even ethics – is built into the model. 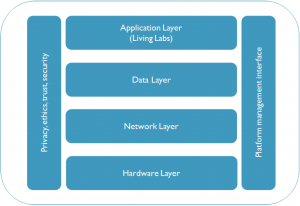 Taking It beyond Europe

How might this translate to other countries like the US? Europe tends to be more protective of the private citizen than the US is – and there are arguments both for and against this. But a US deployment is likely to feel different from a European one. Or a Chinese one, or an Indian one. That said, if the decision tree is basic enough, those differences can still leverage the work done in Europe. After all, the framework is based on critical questions, not presumed answers to those questions.
While this might feel like one big project, it really breaks down into multiple separate projects. They already have test cases involving metering and roadway management, for example. Each of these takes a fair bit of work to sort through the details – and, even at this level, one solution won’t work across the world. Different cities may well have different ideas about how their parking meters work, for example.

Success is ultimately defined by how satisfied the populace is with the services. In their first Smart City installation, even though usage is low at the moment, those users have rated the services at 8.2 on a scale of 1-10 (10 being best). That says that something is working. But it’s truly a success only if more users discover and like the services. If low usage is due to a chunk of people not liking or trusting the services, then that will be a separate problem. We may have to defer our judgments for another few years.

2 thoughts on “What Is a Smart City?”