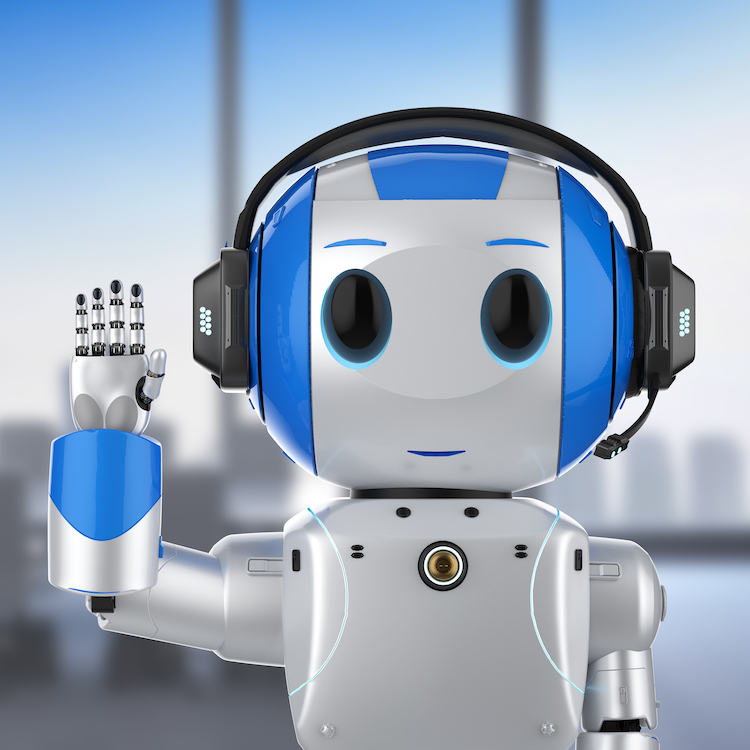 Want to Rule a Robot Empire? InOrbit Can Help!

I’ve long been interested in the concept of humanoid robots boasting general artificial intelligence (AGI), which is the hypothetical ability of an intelligent agent to understand or learn any intellectual task that a human being can. (AGI is sometimes referred to as “Strong AI,” although academic sources typically reserve this term for computer programs that experience sentience or consciousness.)

Just the other day, my wife (Gina the Gorgeous) fixed me with a piercing gaze and said: “You haven’t been listening to a word I’ve said!” I remember thinking to myself, “Well, that’s a funny way to start a conversation!” (I’m sorry, the old jokes are the best jokes). It turned out that Gina had been waffling on about her desire to have a humanoid robot to help around the house, and she was asking how long I expected it to take before her dreams were met.

Having recently watched the Hulu original Mother/Android, my knee-jerk reaction was to think, “Be careful what you wish for.” A very brief summary of this film is that all of the androids we grow to know and love in the first couple of minutes of the movie suddenly turn violent and start to attack people, and things go downhill from there. There’s one scene in the middle of the movie where one of the androids… but I shall say no more, excepting that this scene will haunt me for the rest of my life.

All sorts of things pop into my noggin when I turn my attention to robots. For example, ever since people started to think about creating artificial creatures, such as golems, which were conceived as being formed out of mud or clay, there’s been a fear that such creatures could turn against their makers. In Isaac Asimov’s robot novels (I Robot, The Complete Robot, Robot Dreams, Robot Visions, and Gold), he coined the term “Frankenstein complex” to reflect people’s fear of mechanical men. Asimov also devised the Three Laws of Robotics, which form an organizing principle and a unifying theme for all of his robotic-based fiction — including his classic The Bicentennial Man, The Caves of Steel, and The Naked Sun (see also Vertical Farming in Caves of Steel) — and which subsequently pervaded robot-centric science fiction in general.

Moving on… The Stepford Wives started out as a satirical novel by Ira Levin. Although it was made 47 years ago as I pen these words, the 1975 movie of the same name is still well worth watching. Sadly, the same cannot be said of the 2004 remake, which gives the impression that the director (and the plot) were changed halfway through. Two TV series that are also of interest are Humans and Westworld. And then we have the two-part episode called Identity in Season 2 of The Orville, which is when we visit the home world of the artificial humanoid lifeforms known as the Kaylon. At the end of the first part, we find ourselves in a vast underground cave system piled with billions of skeletons of the Kaylon’s organic creators. And, of course, it would be remiss of us to neglect the 2004 TV series Battlestar Galactica (itself a reimagining of the 1978 TV series of the same name), in which an android race known as the Cylons get up to no end of mischief (the Cybermen in Doctor Who don’t count because they involve cybernetically augmented humanoid brains).

At the time of this writing, there are currently about three million industrial robots operating in factories around the world. Many of these devices are stationary (i.e., fixed to the floor), often located in “cages” or areas to which human access is denied. These cages aren’t there to keep the robots in; rather, to keep us humans out. This is because the vast majority of these devices don’t have the ability to detect the presence of people, but they do have the ability to inadvertently crush or decapitate anyone who finds themselves in the wrong place at the wrong time.

Stationary robots are complemented by their mobile counterparts in the form of automatic guided vehicles (AGVs), which can be used to transport materials and products around factories and warehouses. AGVs employ relatively simple technologies (e.g., lines painted on the floor) to follow specified paths and navigate well-defined areas. A more recent addition to the family is autonomous mobile robots (AMRs), which boast sophisticated sensor systems like computer vision coupled with artificial intelligence (AI). This sensor-AI combo allows them to perform tasks like object detection and recognition and use this understanding to navigate their way around environments in which the landscape may change over time. And just to increase the fun and frivolity, we are now beginning to see the introduction of collaborative robots, which are also known as cobots. These little rascals are intended to work interactively with, and in close proximity to, humans.

The reason I’m waffling on about all of this here is that I was just chatting with a really great guy called Florian Pestoni, who is CEO of InOrbit, and who knows a heck of a lot about robots and how to manage the little scamps.

We started by my asking a version of the “One year to 100 years” question I often pose with respect to the technology associated with the person to whom I’m talking. In this case, the question I presented to Florian is that I don’t expect to see humanoid household robots within one year, but I do expect that they will be scampering around in 100 years, so — given these two extremes — when would Florian expect this to come to pass.

Florian nimbly sidestepped this question by replying that having robots in the home is coming sooner than most people suppose, but that they will be presented in a different packaging than most people expect. That is, household robots may not at first appear in humanoid shape, but instead in a more pragmatic form. As an example, Florian pointed me to the Mobile Assistive Robot offerings from Labrador Systems, as were discussed in a column on Robotics World. This is essentially a shelf that moves around autonomously, which is a tad underwhelming in the context of my wife’s expectations. Still and all, it is a smart robot that can help with certain chores and be useful in the home. Florian also noted that other companies have taken this sort of robot platform and mounted a robotic arm with six degrees of freedom (6DOF) on top, which manages to increase the platform’s useful and scary factors at the same time.

Another point Florian made is that a whole bunch of technologies have converged — mobile, sensors, AI — to facilitate the creation of robots that can co-exist with humans, and that the resulting robots are spreading to every industry, including healthcare, construction sites, agriculture… the list goes on.

In the case of healthcare, for example, we currently don’t expect to see a robot performing brain surgery, but we would not be surprised to see one transporting linen around a hospital, thereby freeing up the limited staff that are available.

As just one example of robots in agriculture, at this year’s Consumer Electronics Show (CES), which was held 5 to 7 January 2022, John Deere announced a fully autonomous tractor.

Florian also noted that when the COVID-19 pandemic first reared its ugly virus head, he was worried as to the ability of the folks at his local “mom and pop” grocery store being able to sustain their business. Within just a couple of weeks, however, they were doing deliveries using sidewalk robots. In this case, you place your order using an app on your smartphone. You pay through the app, which informs you as to the current state of play, along the lines of “Expect your order to arrive in 15 minutes.” You can track the robot on a map on your smartphone, and it notifies you when it arrives outside your house, at which point you walk down your drive, use the app to open the robot’s lid, remove the goods, close the lid, and you’re done.

The picture below shows one of these delivery robots in action with a cameo from Florian’s dog, Cocoa, who was initially freaked out, but who quickly became accustomed to these self-driving coolers.

The company that makes and operates the robot shown here is called Starship, but there are several others like Kiwibot and TinyMile. Florian says that, at first, there was a novelty value and people were taking pictures (like the one he took above), but before long no one paid any attention and “These robots became part of our lives very quickly.”

Florian points out that there are lots of people talking about building robots, but relatively few people think about running and managing thousands of these devices, especially if we are talking about a wide mix of robot types working together.

This is why Florian and his partners formed InOrbit, whose mission is to manage RobOps (“robot operations”) at scale. RobOps is a new category at the intersection of the cloud, AI, and robotics, combining elements of DevOps and People Ops (“Think Datadog meets Workday… for robots”). This is also why Florian launched the Robot Operations Group (ROG), which is a completely open-ended, non-commercial organization. Embracing a global community dedicated to establishing best practices, ROG meets virtually once a month. Even more exciting is the fact that ROG is planning on holding its first RobOpsCon in Silicon Valley in October 2022.

As Florian says about InOrbit, “We don’t make robots… we make robots better. We are the boring infrastructure behind the robots, keeping them healthy and letting you get the biggest bang from your buck.” In order to achieve this, InOrbit provides users with the ability to master The Four Os of RobOps: Observability (monitoring and accessing data from the robots), Operations (although the robots are autonomous most of the time, they may need to be augmented with remote human expertise, in which case InOrbit provides the necessary infrastructure), Orchestration (integrating different types of robots with IT systems in the enterprise), and Optimization (optimizing across everything discussed here to obtain the best value from your robotic kingdom).

In a robotic nutshell, InOrbit helps robotics companies and enterprises spanning myriad industries to get the most out of the new generation of smart robots. In their own words: “InOrbit helps robot developers by accelerating time-to-market, enabling continuous improvement and freeing them to focus on differentiators. Enterprise customers embracing automation as part of their operations can use InOrbit to maximize the value of every robot by driving speed of deployment, reducing total cost of operation, and increasing overall process efficiency.”

All I can say is that if I ever decide to create my own robot empire, you will definitely find me knocking on InOrbit’s door. How about you? Do you have any thoughts you’d care to share on anything you’ve seen here?

One thought on “Want to Rule a Robot Empire? InOrbit Can Help!”