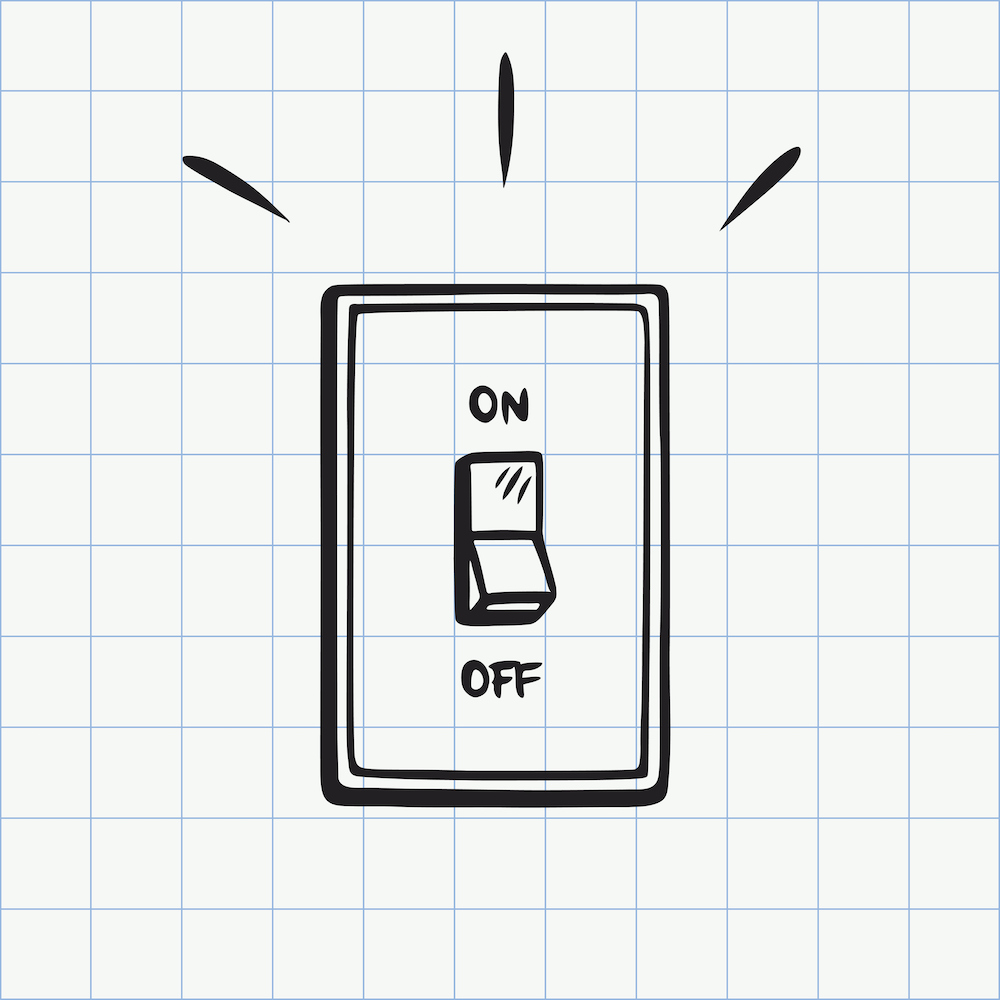 “I’m so fast that last night I turned off the light switch in my hotel room and was in bed before the room was dark.” — Muhammad Ali

In the Beginning, there were electrons. Then came wire. Then the switch. And it was good.

At some level, wires and switches are all we need to make digital electronic systems. Submicron transistors are the switches and stacked metal layers are the wires. Progress, eh?

But some systems need really big switches, and for those we employ mechanical relays or IGBTs or some other type of high-voltage, high-current toggle switch. Power supplies have mechanical on/off switches. The circuit breakers in your house use switches. You don’t see Dr. Frankenstein biasing the gate on a transistor, do you?

Some things seem to be improvement-proof. It’s pretty hard to come up with a better alternative to wire or switches. What could be simpler or more reliable than a basic on/off switch? Glad you asked…

A 35-person startup company has invented a replacement for the lowly switch. Hardly seems possible, but they’ve produced prototypes and are getting a warm reception from wireless 5G developers and telecom companies. Why telecom? Because the equipment up a pole consumes a lot of power but also has limited space. And space – that is, physical size – is the biggest thing separating this switch from its antediluvian ancestors.

Menlo Micro is based in Irvine, California, not Menlo Park, California. (The name is a shout out to Thomas Edison’s lab in Menlo Park, New Jersey.) They call their invention the Ideal Switch. “We firmly believe [it] to be the most important technological innovation in the electronics industry since the transistor,” says CEO Russ Garcia, with no small amount of hyperbole.

Under the hood, Menlo’s switch is a MEMS relay. Lots of MEMS relays, actually, all on one die. Each cantilevered beam carries a modest amount of current, but, if you gang enough of them together, the device can carry hundreds of volts at dozens of amps. The result is a tiny chip that functions like a big honkin’ mechanical relay. It’s far smaller than a relay, and it doesn’t require a heatsink. So, instead of a baseball-sized mechanical component, you have a tiny surface-mount chip no bigger than a capacitor.

Menlo’s Ideal Switch is still a mechanical switch in a sense, as opposed to an IGBT or deep-junction MOSFET that switches by lowering its resistance and channeling current. Its MEMS beams move up and down to open and close a physical contact, albeit a very small one. When the beams are closed, they touch their opposite contact and current passes through directly, with almost no resistance. No resistance means no heat, which means no heatsink.

Because MEMS devices have moving parts, the Ideal Switch requires a finite amount of time to switch, but it’s about three orders of magnitude quicker than a normal mechanical relay. Menlo says its Ideal Switch needs only a few microseconds to switch, versus a few milliseconds for a mechanical counterpart. You wouldn’t want to use it as an oscillator or as the basis for a switching power supply, but it’s more than fast enough for other applications. For safety shutoffs, for example, Menlo’s Ideal Switch could react far faster than a conventional relay.

Solid-state switches aren’t a new idea, nor are they unique, but Menlo Micro thinks it’s found the right combination of technologies to finally replace mechanical relays. The company was founded five years ago as a spinoff from General Electric (which Edison founded). GE had been researching ways to reinvent the familiar circuit breaker by experimenting with different materials and techniques. Menlo Micro took that work and ran with it, commercializing the alloy and fabrication that proved to be the keys.

The company is understandably shy about describing said alloy but insists that it’s compatible with standard MEMS fab lines and is non-contaminating. Menlo currently uses Silex in Sweden to fab its parts, but could just as easily port the process to other MEMS-compatible fab lines elsewhere. Like a fast food chain delivering its “secret sauce” to franchisees in unmarked tubs, Menlo Micro consigns its magic ingredient to the fab, which then follows its standard process flow.

Unlike most relays or semiconductor switches, Ideal Switch consumes almost no power in either state, on or off. When off, it consumes exactly no power. In the on state, it needs a few nanowatts, which is somewhere around 10× to 100× less than the alternatives. Menlo says its device is rated for billions of open/close cycles, perhaps tens of billions. (Testing is ongoing.) That’s also one or two orders of magnitude greater than either the semiconductor or mechanical versions. If/when an Ideal Switch fails, it tends to fail closed, but that’s configurable at the factory, Menlo Micro says.

The company isn’t quoting prices yet, but CEO Garcia says “price won’t be an issue” for customers looking to replace conventional relays or switches. He points to Ideal Switch’s lower manufacturing costs and fewer mask layers compared to an SOI device as rationale. If that promise holds true in production, Menlo’s Ideal Switch certainly looks like, well, an ideal replacement. Its small size alone will attract designers looking to jettison large heatsinks, mechanically wobbly assemblies, and heat-dissipation issues. Who knew you could improve something so basic?