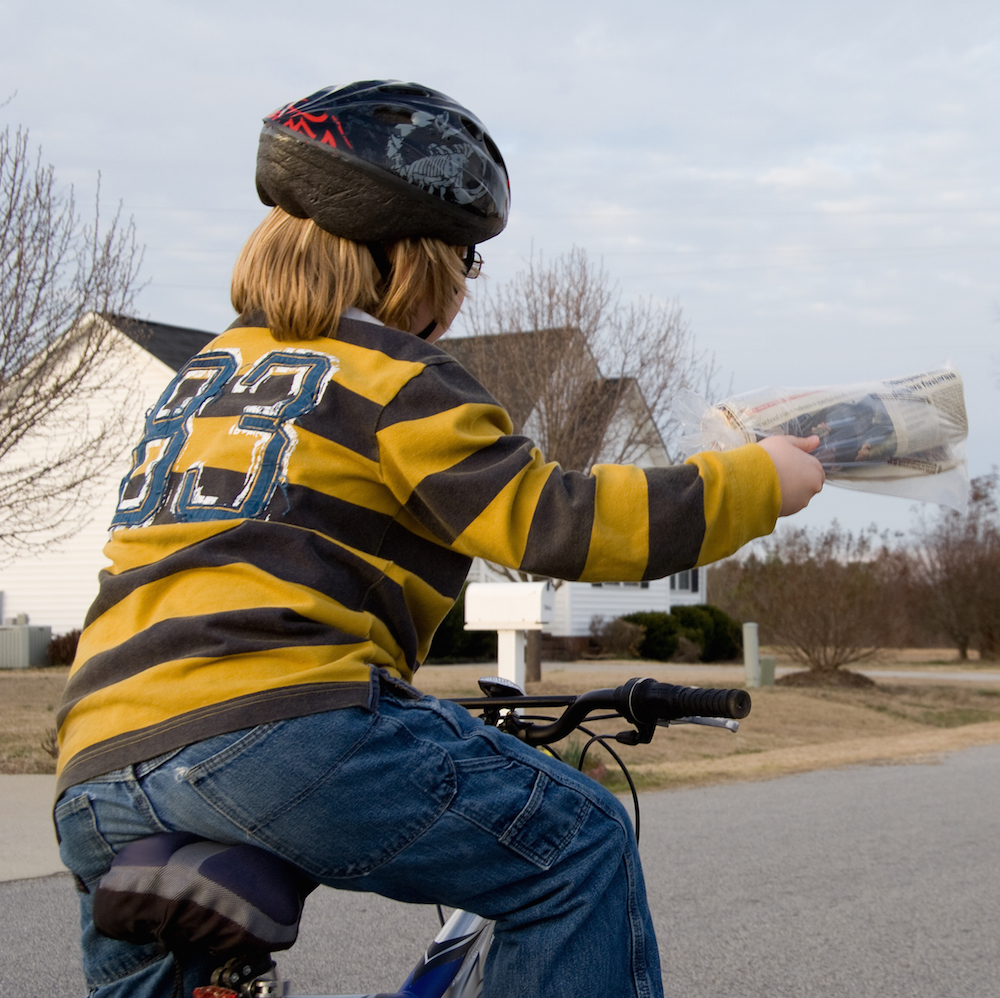 The Microprocessor and the Newspaper Delivery Boy

“You’re never going to find… the perfect meal without a constant willingness to experience a bad one.” —Anthony Bourdain

Why is there a McDonald’s on the Champs-Élysées? You would think that the millions of tourists flocking to Paris each year could find better places to eat. It’s not as though they’re sipping McBordeaux with their Repas Félicité.

No, it’s because we’re stupid and we make bad decisions. But that’s okay – everyone else does, too. Even your customers. Especially your customers. Use this to your advantage.

Consider Crest toothpaste. Last time I looked, there were 60 different types of Crest toothpaste for sale (all with five-star reviews), and that’s just in this country. Sixty! I’m no chemist, but I suspect they’re all virtually identical formulas inside the tubes, just with different flavors and different marketing. Our business isn’t much different than selling toothpaste – or maybe like selling toothpaste to doctors. That is, the customers are educated and up-to-date on the general topic; they just don’t care about the specifics of 60 different brands. They’re not ignorant. They just choose not to spend their time deep-diving into your product line. Toothpaste ads are a lot like technology ads: there’s no content. It’s all branding and smiling models, but no specifics on the product itself. And that’s okay.

Same goes for most hybrid cars, like Toyota’s Prius. They’re popular, but many (perhaps most) buyers get one for the wrong reasons. They’re deluding themselves. You won’t save money on gas. Unless you’re traveling a zillion miles a year, you’ll spend more on the car than you’ll save on fuel. You’re better off buying a normal car. Hybrids have all the same hardware as a conventional gas-powered engine plus hundreds of extra pounds in batteries and motors. It’s like hauling around two fat people in the backseat every time you drive. Want to improve gas mileage? Buy a diesel, lose weight, or get a smaller car.

“I’m doing it for the environment,” owners cry. Still delusional. Pumping oil out of the ground is bad but dumping toxic battery acid back into it is okay? “It reduces dependence on foreign oil,” they say. Most oil in this country comes from Alaska, Canada, and Venezuela, three places you don’t hear about much in the news. “But batteries are recycled.” No, some of the paper and metal bits are recycled; the rest is dumped somewhere beyond your backyard. None of which matters to the customer base, which makes up its own rationale for buying a hybrid. As we all do.

Plenty of urban intersections have a gas station (or coffee shop) on all four corners, each one in direct competition with the others. Customers choose based on convenience – do I have to turn across traffic? – rather than product specifications. The product itself is a commodity. The deciding factor is expediency.

​Families driving cross-country (or visiting Paris) will stop at a familiar fast-food chain instead of trying out Mom’s Excellent Diner simply because they’re minimizing risk. Rather than make the best choice, they avoid making a bad choice. You won’t love the food, but you won’t hate it, either, and that’s more important.

Over in the semiconductor, hardware, and software world we do the same thing. We dig in our heels and buy the CPU, the OS, or the toolchain that we’ve used before, largely because of familiarity and inertia. It’s hard to get customers to switch to a “better” product, and advertising your superior technical benefits often won’t help. As with toothpaste, we’re confronted with too many unfamiliar choices, so we stick with what we know. ARM and x86 are popular because they were popular before; Windows and Linux have familiarity and momentum on their side. Entirely new products fight an uphill battle to gain acceptance. In an industry world-famous for its innovation, we’re surprisingly resistant to change.

For years, I subscribed to a daily newspaper (yes, the paper kind). It got thinner and thinner over time, but it arrived on my doorstep every morning like clockwork. The guy who delivered the paper had an amazing arm. He could fling a folded newspaper out the passenger-side window of his moving car and hit the same spot every time.

He eventually left his job, and his replacement didn’t have the same talent or service ethic. Every morning brought a new and challenging search for that day’s hiding place. Sometimes the newspaper was under a bush; sometimes at the neighbor’s house; sometimes it just didn’t arrive at all. After a few months, I canceled my subscription.

Back at the newspaper office, I imagined the circulation manager worrying over declining subscription rates. Do they need to change their pricing? Are they lacking a feature? Is it the rise of online news sources? Insufficient marketing? Changing customer demographics? Whatever editorial, production, or financial fixes they contemplated, I doubt they ever fingered an early-morning delivery guy as the root cause. I was happy with the newspaper itself; there was nothing the newspaper staff needed to do. It was the hourly contractor who blew the deal. In techno-marketing terms, it was the “last mile” that made all the difference.

The ARM processor was initially designed for a small homebrew computer system (think Apple II or TRS-80) but hit the big time when it was adopted by Ericsson, Nokia, and other early cellphone makers. It caught on mainly because of its delivery mechanism: that “last mile.” When other CPU chip makers were doing just that – making physical chips – ARM was licensing its CPU design to companies that wanted to integrate it into a small ASIC. A standalone processor chip would have been too bulky, even for bricklike 1980s-era cellphones. It wasn’t technical elegance, instruction sets, or microarchitectural sophistication that won the day. It was the delivery mechanism. (It also helped that ARM was European.) ARM was delivered in a format the others didn’t offer.

The message here is that the product isn’t always what we think it is. The hardware and the software are just the start. The whole package, including delivery, financing, support, and a dozen other seemingly trivial details, are what sway customer decisions. It’s irrational, and it’s frustrating, but it’s terrific when we’re the ones making the decisions.

2 thoughts on “The Microprocessor and the Newspaper Delivery Boy”