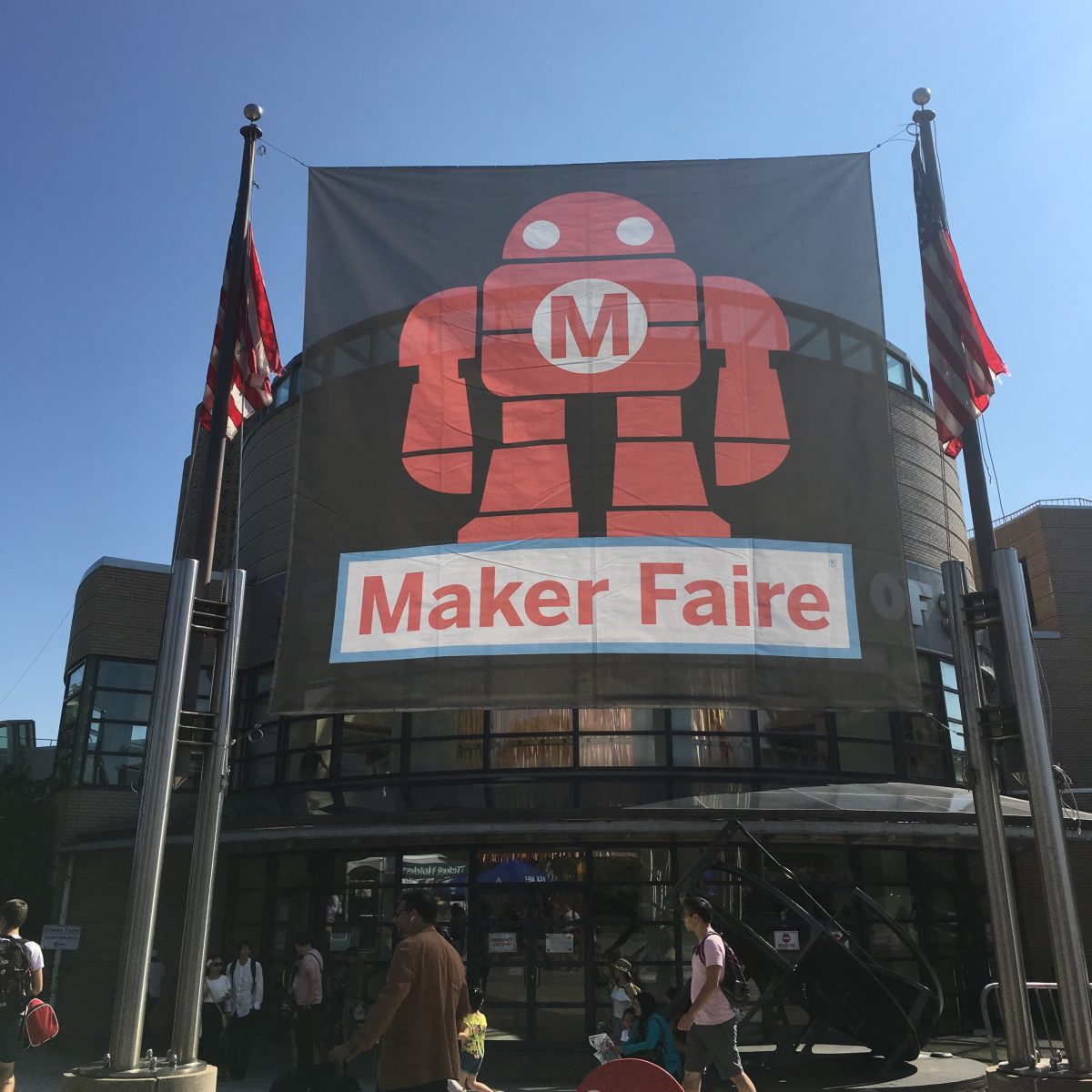 Imagine you are an admissions counselor at your favorite engineering school. It’s a top-flight institution, and you have far more applicants than openings. You need to be very selective about who you admit.

The first candidate enters your office and takes a seat.

“So, tell me a little bit about what you’ve done in high school, and why you want to be an engineer.”

“Well, I have a 4.0 grade point average, perfect SAT scores, I was robotics club president, and trumpet section leader in the band. I want to study engineering because I always enjoyed and excelled at math and science, and I think engineers can help make the world a better place.”

Impressive. This kid is an awesome student – bright, motivated, confident and articulate, running through their academic credentials with only a hint of nervous energy. Definitely goes in the “consider” pile.

“Tell me what things you’ve done during high school.”

“Well, I built my own .25 micron semiconductor fab in my house and successfully fabricated PMOS and NMOS diodes, transistors, logic gates, and other components. Next I want to create my own Intel 4004 processor, and I’m also working toward a CMOS process.”

Welcome to the amazing world of today’s makers! The EE Journal team visits the World Maker Faire in New York City each year to check out the hundreds of booths where makers young and old “show and tell” their creations. Their projects are diverse, from needlepoint to robots to random flame-spewing steampunk contraptions that defy explanation. Their media range from construction paper to semiconductors. Their tools include 3D printers, Arduino boards, welders, laser cutters, crayons, paste, and good-old hand implements.

Why do they do it? To save the world? To learn? Or “just because”? Nothing about makers can be pinned down into a particular formula or demographic. Their motivations, backgrounds, and interests run the gamut. The common element is the desire to create, to solve problems, and to learn by doing.

This year we decided to select what we felt were the best of the best (viewed through our electronic engineering lens). We were looking for curiosity, problem-solving process, creative use of materials, and diversity of discipline. We wanted people who approached electronics in an interesting and exciting way – bypassing the usual pre-fab “kit” for something more original. We wanted to recognize people and projects that we felt exemplified the spirit of the engineer of the future.

With that, here are our three EE Journal Editors’ Choice selections for Maker Faire 2017. 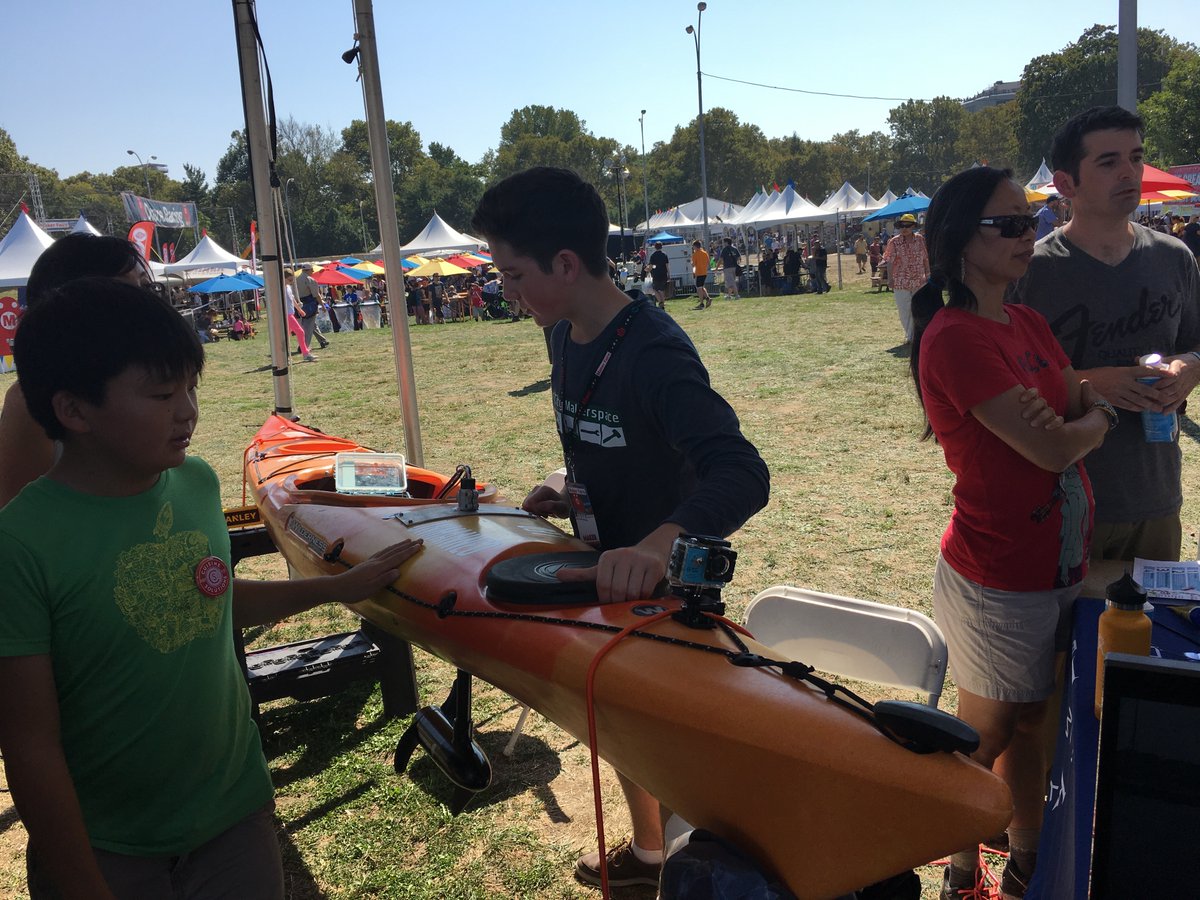 Last year, Leo was an 8th grader with a kayak he had outgrown. He asked his father what he should do with it. His father suggested he might try to make it drive itself out to an island 5 miles off the shore of New Hampshire where he lives.

Leo was intrigued. Game on.

Using Fusion 360 and a 3D printer, he designed and prototyped a steering rudder system for the kayak, which he later built with metal. He then came up with a stepper-motor based system to control the rudder. He got a small electric trolling motor which he cut in half and installed through the middle of the kayak for propulsion, along with an automotive-style 12V battery. He built a circuit that could control the power to the motor.

Now, Leo had a controllable power kayak, which just needed a brain. He went for an Arduino board with a GPS shield, which he installed in a waterproof box. The Arduino would receive position data from the GPS and send control signals to the motor and rudder. Now, Leo just had to learn how to write autopilot software.

Leo’s engineering process was disciplined and thoughtful. He ran simulations of the software and found that his original algorithm (turn left if you’re right of course, turn right if you’re left of course) could result in the kayak just turning in circles if it was too far off to one side or another. He modified it to analyze GPS points several seconds apart, derive a direction vector, and then steer to correct the vector. The new plan seemed to work in the simulator. He then went for a more real-world test on land by having the Arduino navigate him to the local Home Depot with “turn left” and “turn right” LEDs. Successfully arriving at the Home Depot parking lot, he decided it was time to try the system in the water.

Exhibiting the quintessential maker spirit, Leo was undeterred by the daunting array of obstacles he faced. Before starting the project, Megliola had had no experience with Arduino, motor control, power relays, or programming. He had never worked with many of the tools that were required to complete the project. One at a time, he attacked each new discipline, learned what he needed to apply to his project, and ended up with an autonomous kayak he had designed and built gliding smoothly to its goal five miles off the New Hampshire coast.

We have an interview with Leo in our Fish Fry podcast. 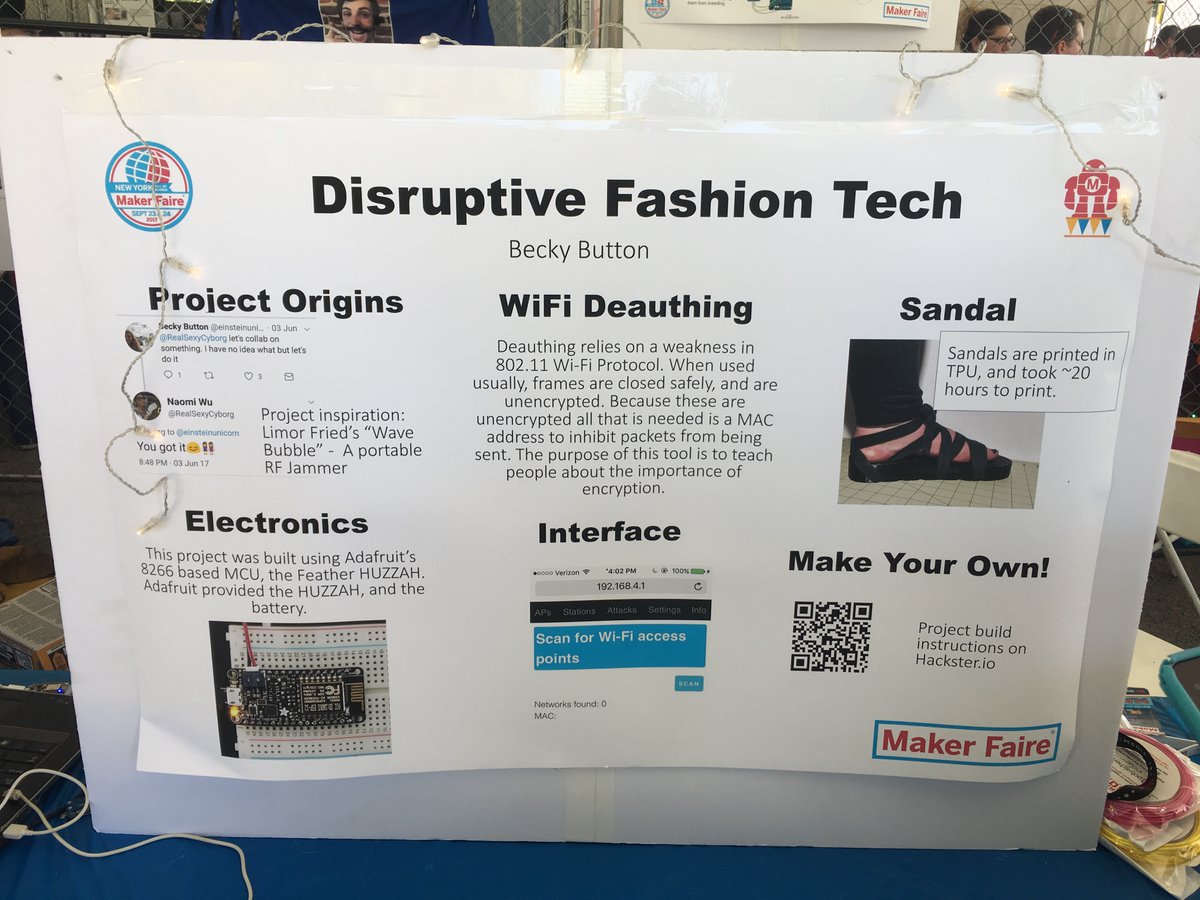 Ever get booted by sandals? If high-schooler Becky Button walked into a coffee shop where you were using unsecured WiFi, you certainly might have. Becky came to Maker Faire to educate people about security vulnerabilities in older WiFi networks with some literally disruptive fashion.

Working with collaborator Naomi Wu, Button created 3D printed sandals that hold a Feather Huzzah WiFi development board and a battery pack. When she walks up to a network that is using unsecured 802.11 protocols, Button’s sandals launch a deauthentication attack, booting every other user off the network, so she can enjoy the WiFi all to herself – uh, oops, we mean – in order to highlight the security vulnerabilities so network owners will correct them.

How does one get from wanting to make some cool, custom, 3D printed sandals to exploiting unsecured WiFi network protocols? Let’s just say the mind of the brilliant budding engineer is an awesome place. Becky’s energy in explaining her project and her process are infectious. We left her booth wanting to design a black hat that could seek out Bluetooth, or some gloves that could handle… Wait, nevermind. The point, as with most maker projects, is learning. Becky built a thing that allowed her to solve challenging problems while learning new skills and disciplines. Inspired by Chinese maker Naomi Wu, Becky wanted to take a similar journey for herself, with her own creative twist. We think she’ll make an awesome engineer!

Button hopes her sandals will bring attention to the issue and encourage people to learn about network security and protect themselves from known weaknesses.

Don’t miss our interview with Becky in our Fish Fry podcast. 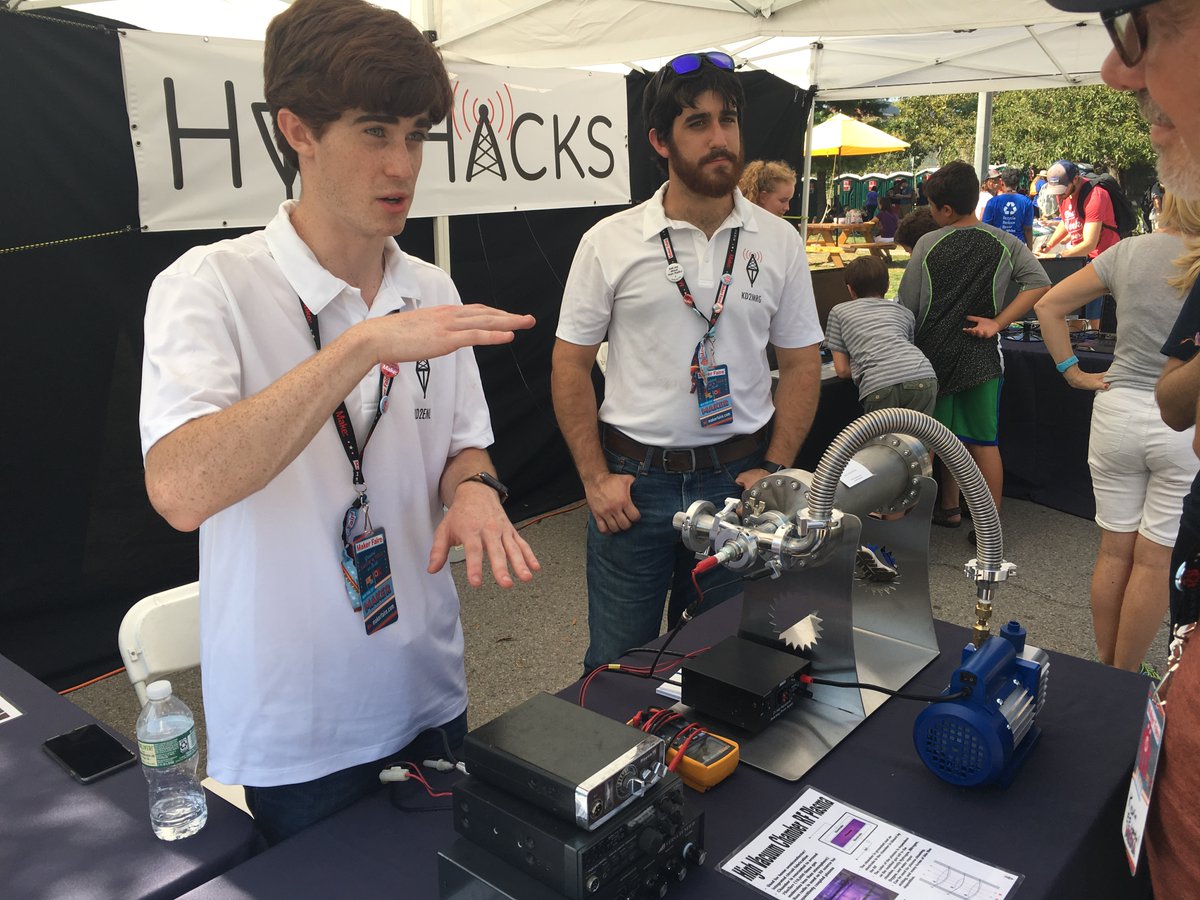 We were attracted to Sam Zeloof’s display by a bright, shiny object. A machined, polished stainless steel cylinder attached to some sort of unidentified machine. Was it a water purifier? A solar oven? The sign near the setup explained that the device was a plasma chamber such as those used in semiconductor manufacturing, and the words “home semiconductor fab” jumped out at us from another sign.

THAT got our attention.

As our readers here well know, the word “home” does not precede the words “semiconductor fab.” Ever. More commonly, “semiconductor fab” is qualified by phrases such as “multi-billion dollar,” so – Hey Sam, what are you up to here?

Sam – a high school senior, had a straightforward answer. “I built my own semiconductor fab with components I ordered off ebay.” What had he built with this fab? Well, he started with components like diodes, transistors, and logic gates. He tested them. They worked. He came up with a maskless lithography system that could do 0.25 micron resolution. He resurrected an old electron microscope he found for salvage prices on ebay so he could inspect his work more closely. We asked how Sam learned specifics of semiconductor manufacturing. “I looked up old expired patents. Patents from 30 years ago have a lot of good information on doing stuff at this 1-micron resolution.”

Sam wants to go to college next year to study electronic engineering.

An interview with Sam is in our Fish Fry podcast.

In this community, we see the bright future of engineering. In a time where many lament the struggles in our education system, the energy required to push kids into STEM/STEAM programs, and the general apathy in our culture when it comes to applying science and technology to worthy causes, makers represent a counter-surge – a groundswell of inspired and inspiring humans who want to use their minds, hands, and voices to move us all forward.

2 thoughts on “The Bright, Bright Future of Electronic Engineering”