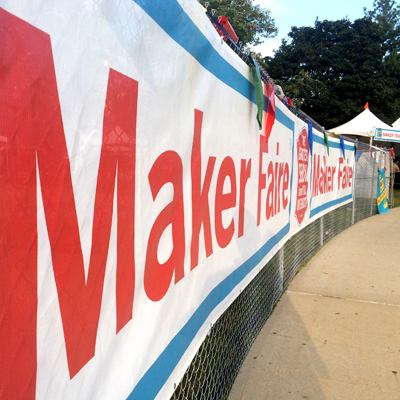 Staying Too Long at the Faire

It’s a sad day. Maker Media, Inc. ceased operations this week and laid off all staff. The company published Make: magazine and operated and licensed “Maker Faires” around the world. We have covered the maker movement and Maker Faires for years, even though our audience is professional engineers. We saw value there. Maker Faire was a window into the future of engineering – a place where we could go to escape the stodgy booths and stilted demos of typical industry events, and walk around in the dirt asking 10-year old kids how they wired up their own LED-blinky-sneaker contraption, motorized skateboard, or WiFi hacking sandals.

The end of Make: is not the end of making.

Without Maker Media, there would still have been high-schooler Sam Zeloof – setting up a home semiconductor fab in his parents’ garage. Middle-schooler Leo Megliola would still be designing and building his autonomous kayak and launching it on its ocean journey to an island 5 miles away. Becky Button would still be making trouble with her WiFi-booting sandals, and 11th-grader Neil Deshmukh would have probably still built his AI Human Detection Program using a Raspberry Pi with an Intel Movidius Neural Compute Stick.

Maker Media and Maker Faire does not get credit for any of them. But, Maker Media does get credit for bringing them to the world with the exposure they got at Maker Faire. Without Maker Faire, we – EE Journal and probably the broader engineering community – would likely never have met and written about them. Maker Faire gave the masses a window into the maker movement, and popularized the hands-on, do-it-yourself, build-for-the-sake-of-building culture in an enormous way. Maker Media gave a huge gift to our world of engineering, and the number of young people they have helped inspire to enter STEM-related career paths such as engineering is incalculable.

In the modern era, it is virtually impossible to run a profitable print publication. The backbone of Maker Media was Make: magazine, a quarterly print publication that cut a wide swath through the wide world of making – covering topics ranging from making your own beaded bracelets to 3D printing the pieces and making the circuit boards for your DIY robot. Some argue that Make: was too broad, or tried to commercialize a movement that – by its very nature – defied commercialization.

Maker Media went big. Dale Dougherty, founder of Maker Media, began publishing Make: magazine back in 2005. The first Maker Faire was in 2006. Maker Media’s flagship events – the World Maker Faire in New York and the Bay Area Maker Faire in California packed in well over 150,000 attendees at their peak. Over the fifteen-year run, millions of visitors came to Maker Faires and were inspired by the creative energy and community on display there. But, going big requires big money, and Maker Media obtained a reported $10M in funding from investors four years ago in order to fuel their growth. Big money requires big returns, and the company began quietly eating its own tail to stay alive.

There was always an impedance mismatch between Maker Faire and the big-money sponsors who came to the events. We witnessed corporate booths being constructed in the dirt that would have been right at home at the Embedded Systems or Design Automation Conferences. Confused marketers wearing suits on opening day walked around glitzy displays trying to engage 10-year-olds in discussions about the subtleties of interchangeable daughter cards on development boards. PowerPoint demos were quickly scrapped and re-packed, suits were replaced with polos, and marketers did a little DIY themselves as they tried to adapt their usual choreographed trade-show schtick to the chaos of the Maker Faire environs.

“Can I scan your badge? If you watch four demos you will be entered for a chance to win a T-shirt.”

We watched the likes of Microsoft, Google, Intel, and a host of other corporate tech giants come and go with enormous glittering-and-confusing booths set amidst the sixth-grade-science-fair contraptions assembled on card tables with hand-drawn poster-board signs. The mega sponsors blew in, and blew right back out again – unsure how to establish proper KPIs to justify the ROI for their lead-generation sales funnel process, or how to quantitatively determine whether their 3 primary corporate value statements and differentiation models were successfully communicated to the audience.

Marketing to makers is an enigma. In a way, the whole point of making is the antithesis of buying, and a reaction against corporate control of our lives. How, then, would corporations make a living selling to makers? And if the audience is not a viable, measurable revenue target, how can a for-profit media company make their living helping big sponsors market to them?

But, there are several babies in that bathwater. First, it is always impossible to put corporate-style metrics on value such as inspiring kids to pursue STEM-related careers. Intel may have utterly failed in their maker-targeted line of development boards from a revenue perspective. But, by cancelling the product lines, did they shoot themselves in the foot? Would the young people who bought those boards, learned electronics and programming from them, and grew into future Intel engineers be the ones who generated innovation that saved some future generation of the company? We will never know. It certainly won’t show up in next quarter’s financial results.

Second, by shining a spotlight on making, Maker Media inspired people. Consistently, the longest lines at every Maker Faire event were at the “learn to solder” booth. Let’s just interpret that for a minute or two, shall we? Massive numbers of attendees at Maker Faire wanted to learn to solder. Learn. To. Solder. They were not experienced electronics tinkerers, but they aspired to crack the lowest-hanging barrier – acquiring the skill to proceed farther in a long journey of learning.

As engineers, we all know that path, and where it leads. 8-year old me had no idea what to do with the Tandy/Radio Shack 100-in-1 electronics kit my parents gave me as a gift. The rows of resistors and capacitors with their spring terminals invited me in, though, and I dumb-thumbed my second grade fingers through the task of connecting enough of them together in the right order to make a working crystal radio – which brought in the one lousy AM country radio station in the remote town of Denver City, Texas. I was mesmerized, and I hated country music. Fifty-some years later I look back on an entire career enabled by that moment. For thousands and thousands of young people, Maker Media may have provided exactly that same spark.

In the electronics arena, there is a strange symbiosis between giant corporate technology and do-it-yourself homemade culture. Most modern electronics hobbyists depend on state-of-the-art multi-billion-dollar semiconductor fabs to create the raw materials for their “do it yourself” endeavors. The single-unit quantities that makers purchase for their projects never make them even a blip on the marketing radar of semiconductor giants aiming to win a socket in the next million-unit smartphone. Instead, makers subsist on scraps dropped from the big-tech dinner table. But makers’ role in the innovation food chain is essential, as each next maker-project-turned-kickstarter IoT device could have billion-dollar implications.

The fate of Maker Media is still in the balance. Dougherty is reportedly exploring options to salvage some of the value of the brand, and to find a path forward for the magazine and the events. Clearly the corporate world has failed the maker movement, and the implications of that far-reaching failure will likely never be known, but will nonetheless resonate for decades in the engineering world. We hope for better. The maker movement will endure, and making will continue to engage and inspire young and old. But, the bright light shined into those shadows by Maker Media will likely dim, and may go out altogether. That would be a tragedy in itself.

6 thoughts on “Staying Too Long at the Faire”