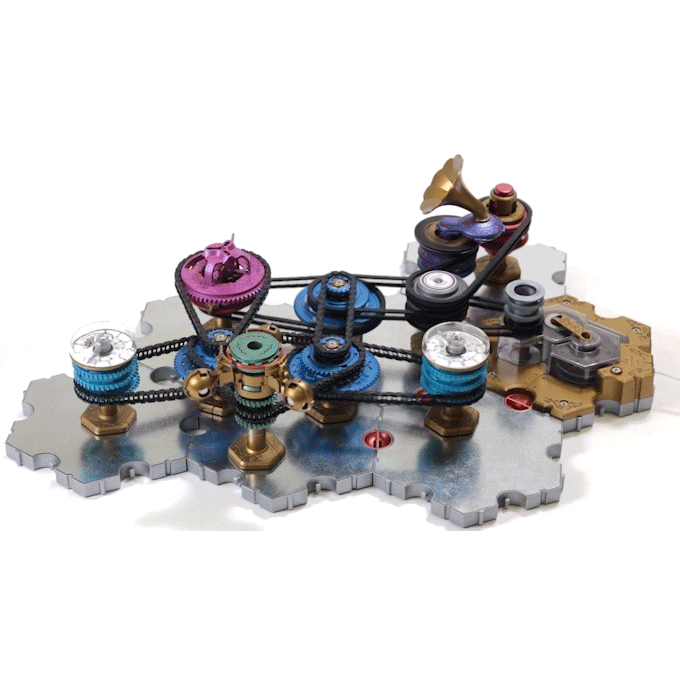 I’m currently so excited I can hardly speak (I can barely even manage a squeak) because today saw the launch of the Spintronics Kickstarter — an event for which I’ve been waiting in dread anticipation for weeks. As we will discuss, Spintronics is a new game suitable for ages 8 to 80+ in which players build mechanical equivalents of electrical and electronic circuits to solve puzzles.

When I was young and foolish — more foolish even than today — I thought that electrical and electronics were the only engineering domains worth talking about, and that things like mechanical engineering were “So 1800s, my dear!” Over the years, however, I’ve grown to have an increasing appreciation of engineering arenas other than my own.

I’m not quite sure how all this started but — now that I come to think about it — I remember as a kid being entranced by the Mouse Trap game, which was first introduced by Hasbro in 1963, thereby making it 58 years old as I pen these words. I was only six years old at that time. Also, apropos of nothing at all, 1963 was the year I watched (from behind the safety of the sofa) the very first episode of Doctor Who, An Unearthly Child, which aired at 16 minutes and 20 seconds after 5:00 p.m. GMT on Saturday, 23 November 1963 (not that I’m a fanatic, you understand). 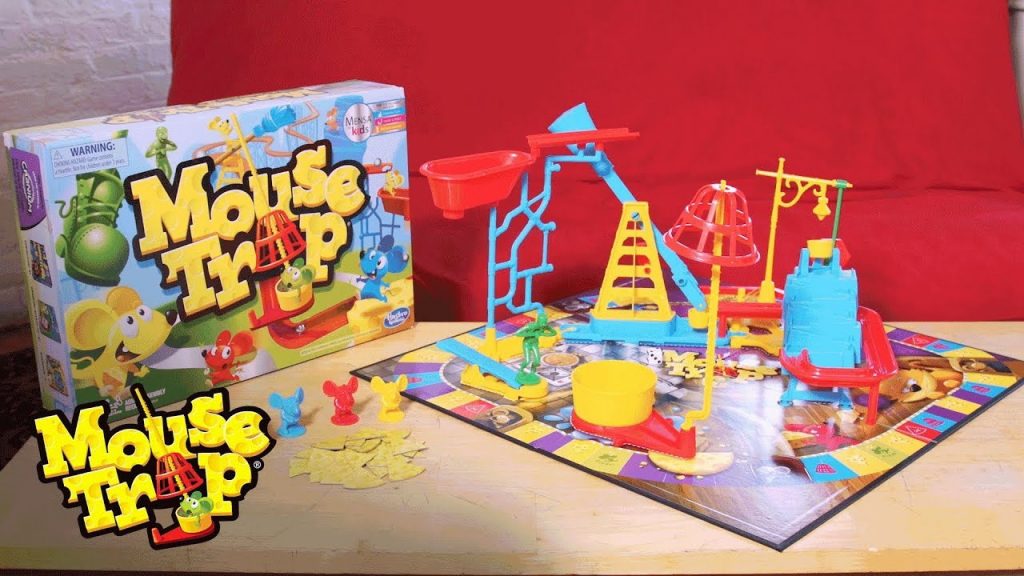 More recently, I ran across the book 507 Mechanical Movements: Mechanisms and Devices by Henry T. Brown. Actually, the full title of the first edition this tome, which was printed 153 years ago in 1868, was Five Hundred and Seven Mechanical Movements: Embracing all those which are most important in Dynamics, Hydraulics, Hydrostatics, Pneumatics, Steam Engines, Mill and other Gearing, Presses, Homologous, and Miscellaneous Machinery; and including many movements never before published and several which have only recently come into use. Phew!

This book was a real eye-opener to me. As it says on Amazon, “This compendium of ingenious mechanisms employs simple drawings to explain 507 of the small components that constitute complex machinery. Left-hand pages feature illustrations, and facing pages offer brief descriptions of use and operation. Ranging from simple to complex, the mechanisms include cranks, pulleys, drills, wheels, and screws.” There’s also a corresponding website that presents many of these mechanisms “Animated for the Internet.”

In turn, this reminds me of something I saw recently — Nautilus Sculptures Based on Logarithmic Gears — which was created by someone who goes by the moniker Rubotix. Now, all sorts of things are popping into my head, such as the fact that one of my all-time heroes is a guy called Chris at Clickspring who lovingly handcrafts awesomely cunning mechanical mechanisms, including clocks that bring tears of joy to your eyes. When I say “handcrafts,” I mean he goes so far as to create the cogwheels, filing their teeth by hand. He even makes his own machine screws, washers, and nuts, for goodness’ sake!

One of Chris’s current projects is to recreate the Antikythera Mechanism (a sophisticated hand-powered analog computer that dates from around 80 to 200 BC and that was used to predict astronomical positions and eclipses) using techniques and technologies that would have been available in ancient times (visit Clickspring’s YouTube Channel to see mindboggling videos of this recreation).

In the aftermath of World War II, it was discovered that a mechanical computer called the Z1 had been built in Germany before the start of the war. Created by Konrad Zuse, the Z1 — which contained approximately 30,000 components — was up and running by 1938. Of particular interest was the fact that the Z1 was a binary, floating-point machine, as opposed to early American computers that were decimal and fixed-point.

In the fantasy book Making Money by the late, great Terry Pratchett, the Discworld’s greatest (well, only) economic theorist, Herbert Turvy, creates “The Thing in the Cellar” (what we would recognize as a water-based analog computer) to precisely replicate the circulation of money in the city-state of Ankh-Morpork. In fact, this was based on a real machine in the Roundworld (the one in which you and I live) — the MONIAC (Monetary National Income Analogue Computer), which was created in 1949 by the New Zealand economist Bill Phillips. The MONIAC was so good at reproducing an economic cycle that these machines were still going strong in economics schools in the early 1990s.

The reason I mention all of this here is that — today as I pen these words — my chum Paul Boswell and his wife Alyssa have just launched their Spintronics Kickstarter. Paul’s name may be familiar to you. Back in the mists of time we used to call 2017, Paul was a professor at the University of Minnesota when he and Alyssa launched their Turing Tumble Kickstarter. This marble-based computer game was so successful that the happy couple have built a mini-empire around it (visit their TuringTumble.com website for more details). I actually have one of these bodacious beauties here in my office. 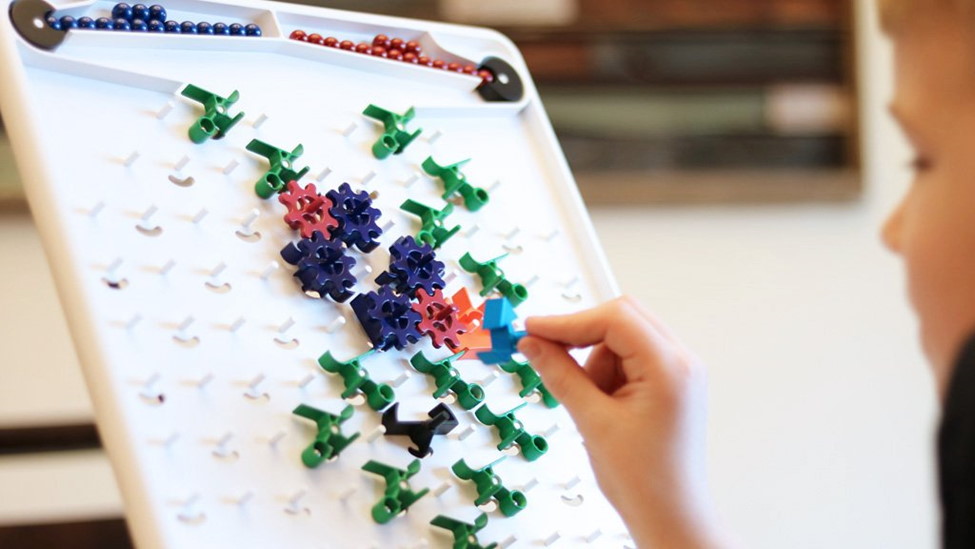 The Turing Tumble is lots of fun for kids of all ages including yours truly
(Image source: TuringTumble.com)

So, you can only imagine my surprise and delight a couple of weeks ago when Paul called me to tell me about the Spintronics launch (as part of this, Turing Tumble LLC is changing its name to Upper Story Ltd.). What Paul has done is to create mechanical analogs of electrical systems and electronic components. Instead of electrons flowing through wires, chains flow through circuit components like mechanical resistors, capacitors, inductors, transistors, and switches.

I don’t care what anyone says, I think this is as cool as cool can be. As it says on the Kickstarter, with Spintronics, “players [remember that this is a puzzle game] can feel the pull of voltage and see the flow of current as they discover electronics in a tangible and deeply intuitive way.”

Let’s take a brief spin (no pun intended) through the spintronic components, not least that I LOVE Paul and Alyssa’s animated images. Let’s start with the spintronic battery, which powers your spintronic circuits. You charge the battery by pulling the string. The battery pushes the chain with a constant force (voltage), while a built-in mechanical circuit breaker automatically shuts it off in the event of a short circuit.

Next, we have the spintronic switch that opens and closes circuits. Push it once to open the circuit. Push it again to close it.

The spintronic junction allows the current to branch, just like an electrical junction of three wires. Each sprocket is one of the three paths for current.

The spintronic capacitor stores energy like a spring. It also doubles as a spintronic voltmeter. The gauge on top indicates the voltage across it.

The spintronic inductor builds momentum. It’s heavy, so it takes a lot of energy to get it moving, but once it’s going, it doesn’t want to stop!

The spintronic transistor is a voltage-controlled resistor. The higher the voltage on the top sprocket, the lower the resistance of the bottom sprocket.

The spintronic ammeter lets you hear the current. The more the current, the higher the pitch.

Last, but certainly not least, Paul’s even created an online spintronics simulator that allows you to visualize your creations before committing them to the real world.

As you’ll see from the Kickstarter, Spintronics is presented as two kits called Act One and Act Two, each of which comes with its own set of parts and associated puzzle book (note that the parts from the Act One kit are required for use with the Act Two kit).

Both of these kits include a spintronics battery, so it’s a bit confusing to see that there’s also something called the Spintronics Power Pack. In fact, this is an expansion kit that includes more components, another battery (so you can drive your circuits with more power), and a new puzzle book containing ten additional puzzles.

There’s so much more than I can cover here, so if you wish to learn more, your best bet is to visit the Spintronics Kickstarter. Suffice it to say that your humble narrator cannot wait to get his sweaty hands on one of these bodacious beauties. I Want it All (and I want it now) as Queen would say: Part One, Part Two, and the Power Pack. How about you? Can you be tempted? If you have kids, then you have all the justification you need to splash the cash. Even if you don’t have kids of your own, you could buy one for your niece or nephew (you really should test it out yourself first, of course). As always, I welcome your comments, questions, and suggestions.