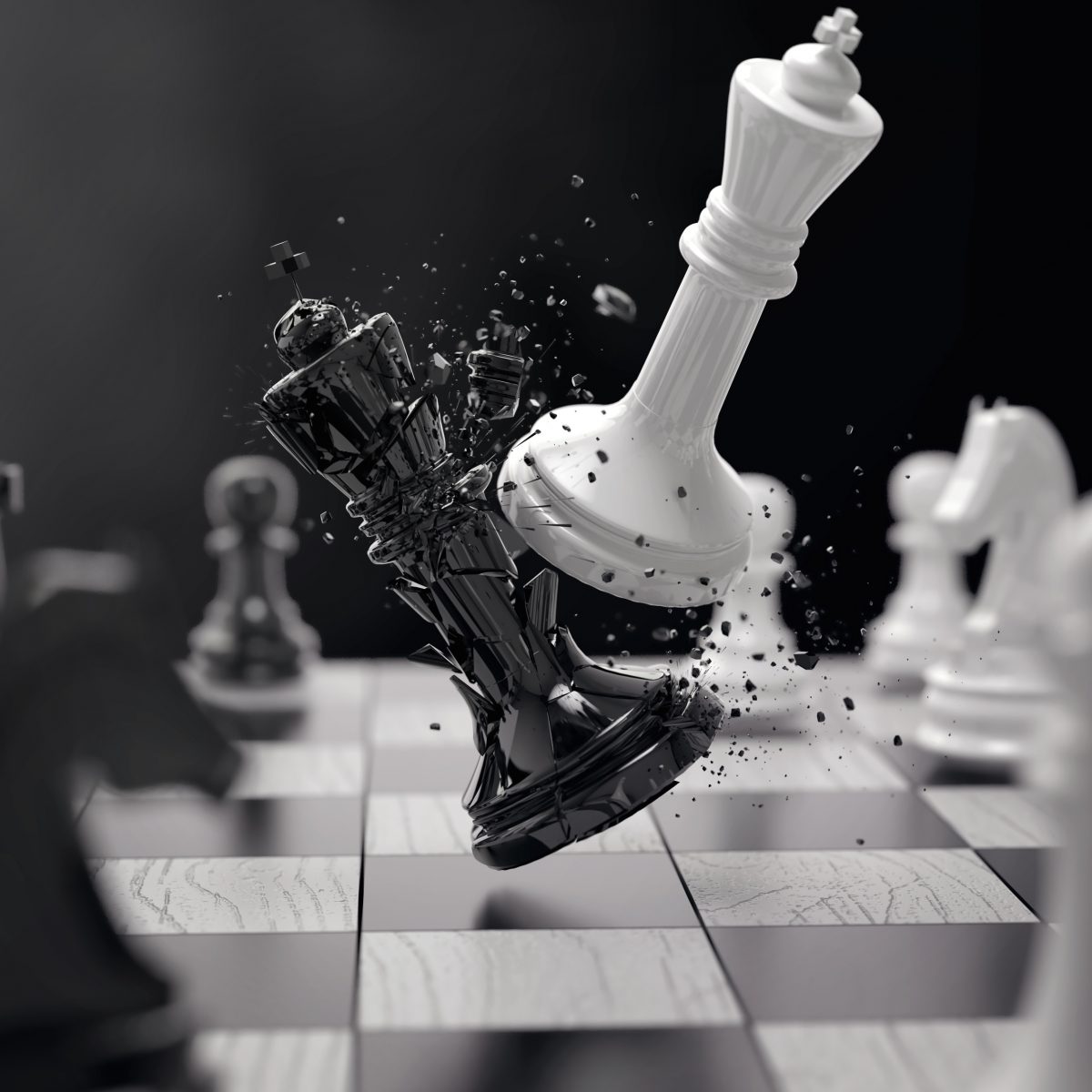 Details of the Versal ACAP Intro and the Company’s “Data Center First” Strategy vs. Intel’s
by Steven Leibson

“Strategy is about setting yourself apart from the competition” – Michael Porter, Harvard Business School

Earlier this month, Xilinx announced the 7nm Versal ACAP series of advanced programmable ICs along with a new board-level hardware accelerator for data centers called Alveo. Xilinx President and CEO  Victor Peng announced these products during his keynote on October 2 at the Xilinx Developers Forum (XDF) held in San Jose, California. Later that day, Peng sat down with me for 25 minutes to discuss the announcements and his strategy for the business. What follows is a transcript of that interview.

Peng: I talked about how there are three arms in the strategy. It’s not like Priority One, Priority Two, and Priority Three. We see a great opportunity in the data center, and, for Xilinx, the data center is not just compute—where there’s a lot of excitement—but it’s storage and networking [too]. At the same time, we’re not diminishing our commitments to our core markets in any way, shape, or form.

I’ve met with more than one hundred customers since taking over as CEO, and there’s not one customer, no matter which segment they’re in, that, if they’re not in a sense directly participating in some cloud, they have a cloud strategy. I’ve talked to customers that have been focused on one area for ages, and, when they hear we’re involved with machine learning (ML), they say, “Oh. I’d like to understand that.” Because there isn’t one customer that isn’t either doing or thinking about adopting embedded ML in their application.

So, that’s exactly how I see ML. And for those reasons, [even with] all the things we’re doing with the data center, I’m finding tremendous interest in ML across many of our core customers in other markets. Either they want to use ML, too, or they want to understand our strategy.

Certainly, ML technology is being leveraged on the cloud edge and in endpoints. For example, take DeePhi. [Xilinx recently acquired DeePhi.] They were more edge focused than data center focused. But it’s not an “or;” it’s the genius of the “and.” That’s definitely what we’re going for.

Because Versal was such a big architectural change, I didn’t want people thinking this [rollout] is all about the data center. You could have that impression because we have said in the past, “data center first,” and then there’s a lot of buzz around ML, so you have to compare yourself against Nvidia GPUs, and so forth. That would make everyone think, “Oh, this is all about the data center. What about me?” So I really wanted to go broad. I think the good news is that our customers heard the message, and they’re totally fine with it. They’re not saying, “Oh, I’m worried that you’re decommitting.” In fact, they’ve actually expressed a lot of interest in knowing what we’re doing.

In addition, we’re trying to build an ecosystem, and we want people who aren’t familiar with us to feel that they can commit. So we felt it was important for those people to see a roadmap. They see our deep commitment, they see that it’s very broad, and they feel that they’re not going to get on a platform that’s just a point solution, or maybe doesn’t have legs.

Q: How is the transition to the “Data Center First” strategy going?

Peng: Just yesterday, I heard that Amazon was offering three more geographies for the AWS EC2 F1 instance [based on Xilinx Virtex UltraScale+ FPGAs]. Obviously, they wouldn’t be doing that unless there’s customer interest. So, that’s a good sign. You have the ecosystem partners and this is not all of them. We’ve stated a goal of training 1000 new [AWS EC2 F1] users by the end of the calendar year, and we’re already well into the hundreds [of new users]. We’re in open source. We have lots of github products. And we’ve joined Linaro.

I’m completely confident [of success in the data center markets], but it takes a while. You have to build the ecosystem. You have to get people familiar with the tools. Then they start developing, and it’s going to take a while [for their cloud-based products and services] to ramp.

Then there’s Alveo. That’s going to speed things up, but we’re just coming out with it.

I think that there are multiple, different signs that we’re succeeding. In one sense it’s still qualitative. Even where we have some quantitative numbers—number of applications, number of customers trained—it’s not really hard [data] yet, but all the qualitative indicators are moving in our direction. Frankly, it’s beyond what we originally planned.

Now, I’ve had a lot of people say, “I’ve never come to these things [XDF] before, so I’m learning.”

In some cases, we’ve got core customers here. They’re already doing production stuff. There is a class of people who are here [at XDF] who have gone over the hump. They’re here for a very good reason. They know why they’re here.

And then there are people here who are trying to understand what we have. They say, “I’ve heard some interesting buzz. I’m here to understand.” Over time, I think a lot of these people will design production products [based on Xilinx devices]. 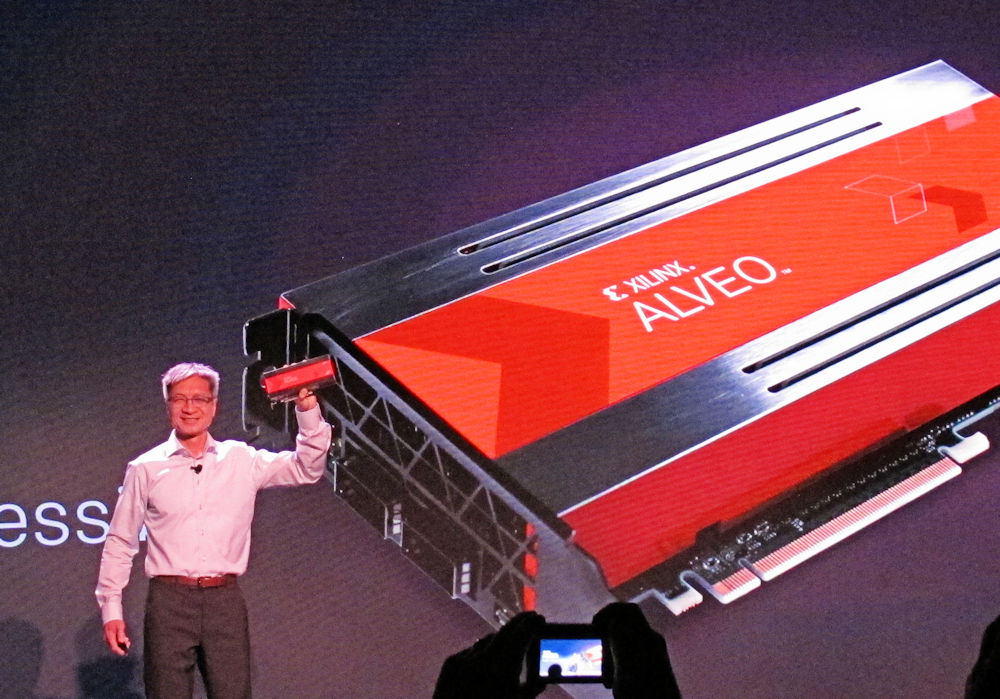 Peng: I know this can be kind of a nuance, but I view Alveo not just as a board but as a whole platform. We’ve been providing the whole platform, except the board. In embedded markets, Xilinx couldn’t offer production-ready boards for all the different applications. We’d need hundreds if not thousands of SKUs. But data center is different because it’s very standards-based: standard form factor, standard interface, and other requirements. So this is the place where we really see we could offer [a board-level product].

Having said that, I think there are still special needs. We’re not trying to crowd out some of our other partners, and we’ve talked to them. They do want to understand how they can still play [in the data center market], and I think they do understand how they can do that. In a lot of cases, if you really break it down, some of their added value isn’t necessarily just in the board. If they were doing something special, it’s not something that we would necessarily do, because we’re trying to hit a sweet spot that’s very broad.

Q: The mantra for XDF seems to be “Adaptive Computing.” Could you give a crisp definition of this term, from the Xilinx perspective?

Peng: I think adaptive computing is being able to optimize for different workloads using the same underlying physical hardware. Whether you’re adapting dynamically or just at bootup, you can reconfigure one physical platform either for the same workload, iterating improvements over time, or for different workloads. It’s being able to deploy improvements, or new features, or reconfiguring for completely new workloads.

There’s a range. The most dynamic is when you’re doing it live, real time, swapping things in and out using partial reconfiguration – what we now call dynamic reconfiguration. That’s the most robust implementation. At a minimum, you’re taking advantage of this hardware—hardware that could have completely different architectures on the same physical device—adaptable hardware that’s also software programmable. I think this is fully differentiated from solutions that are only software programmable.

Q: How is the DeePhi acquisition going?

Peng: Truthfully, it’s still early days, but we were working closely with them before. Their team is now fully integrated [into the overall Xilinx team]. We’re offering their products. We haven’t yet fully integrated all of our roadmaps because that’s going to take some time, but they already had great products, great IP. It’s going really well. We’re really excited to have them.

And this is the one tricky bit about any startup. It’s really hard to get huge, public companies to completely commit when they’re not sure about what’s going to happen to you [if you’re a small startup]. Now, as part of Xilinx, customers are sure they [DeePhi] are going to be around. Now the adoption [of DeePhi’s technology] can be even more robust because we took the uncertainty of their being a startup off the table.

Peng: Xilinx’s DNA is programmability, flexibility, and adaptability. We’re going to focus on leading with that. We’ve been the leader. We’ve been the innovator in this field.

If I look at what Intel’s been doing recently, it’s hard to tell just what their strategy is. Of course, they have core CPUs, and they’re going to continue to do that. That’s the lion’s share of their $65 billion in annual revenue. But they bought Altera. They bought Nirvana. They bought Movidius. They bought Mobileye. And now, they’ve hired away Raja Koduri from AMD, and they’re going to do discrete graphics. So, in one sense, if you look at them in terms of acceleration and even ML, you tell me. They’ve got a bet on everything.

Don’t get me wrong. I know Intel is a force to be reckoned with. The data center is their core turf. They have deep technologists—armies of people. They take a long time to turn the ship, but when they do turn the ship, they’ll do a lot.

What do you think of Xilinx’s strategy? Please leave a comment below.