If you love old cars, you know there’s an allure to their look but their sparse instrumentation leaves much to be desired and, of course, these old machines have no connection to today’s wired world. Earlier this year, Berlin-based Incari announced that it had partnered with the Strate School of Design Bangalore and Design 1880 in France. The three partners plan to retrofit advanced human-machine interfaces (HMIs) in classic cars. For some auto aficionados, this will be sacrilege. For others, it’s a welcome update. Which camp are you in?

Retrofitting old cars with modern electronics is a real thing. Classic Porsches and VW Microbuses are being electrified, leaving their internal combustion guts by the wayside. A new breed of classic car collectors eschews the pristine restoration of ancient automotive technology in favor of the comfort and ecological sensitivity of a restomod (a modified restoration of a classic vehicle). While today’s retrofit market is primarily focused on drivetrain electrification, Incari is concentrating on the integration of new technologies that enhance the driver’s experience in older cars. This partnership is not limited to cars, however. It seems that any type of transportation – boats, for example – is fair game.

This is not a new endeavor for Incari. The company has experience with putting state-of-the-art HMIs into vintage cars. For example, Incari updated the instrument cluster in an electrified DeLorean, dubbed the e-Lorean, in partnership with Wunderkind Invest. Unfortunately, Incari has not developed a flux capacitor or a Mr. Fusion power source, but the e-Lorean now sports specially developed electric drive components with a unique HMI. 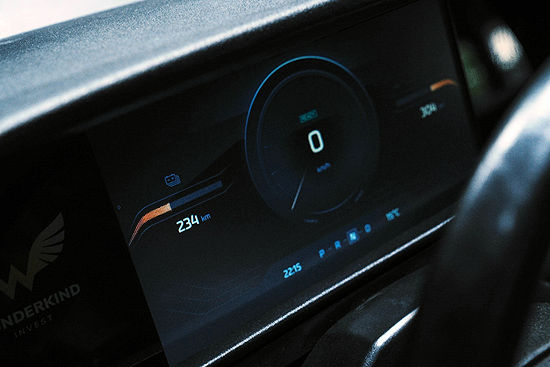 Incari updated the instrument cluster in the e-Lorean, an electrified DeLorean.

Incari worked with Design 1880 to electrify a classic Fiat 100 (shown below) and equip it with a digital display, a Bluetooth connection, and a smartphone holder with induction charging, all while emulating the car’s original style so that the mods look as though they were developed during the same period as the rest of the car. 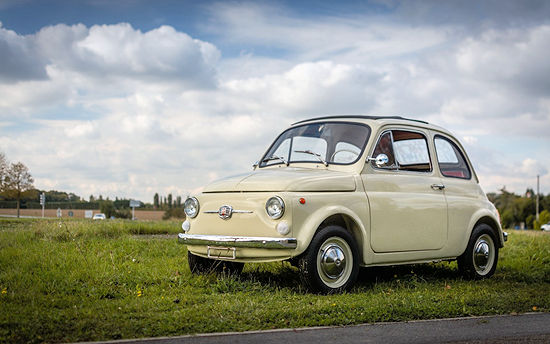 It looks like an old Fiat 100 on the outside, because it is, but it’s electrified.

A circular digital screen replaces the Fiat’s analog speedometer. The screen displays battery consumption and can be customized for other functions. 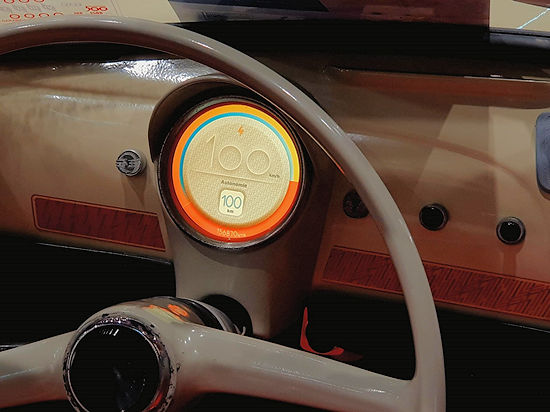 The electrified Fiat 100 has a modern, digital HMI fitted into the circular space previously occupied by the mechanical speedometer.

Incari Studio supports the UI/UX creation process through a modular architecture and a drag-and-drop interface, which allows designers who lack programming skills to design complex interfaces using 3D graphics and animation. The platform then generates code from the design. The drag-and-drop design approach saves time while retaining some amount of flexibility. The company claims development time reductions of as much as 70% based on recent projects.

Of course, maximum flexibility usually arises from a programming interface, where you can do anything supported by the underlying programming language. Drag-and-drop tools with automated code generation have been around for a long time, and they continue to improve, but they’re never as flexible as writing code.

It seems to me that Incari’s reach is somewhat short compared to the aspirations of other automotive development platform efforts like Qualcomm’s Ride Platform, which is aimed at developing software systems for Electric Vehicles (EVs), Advanced Driver-Assistance Systems (ADAS), Automated Driving (AD) systems, and Autonomous Vehicles (AV’s). Qualcomm launched the Ride Platform in January, 2020 and expanded the platform to include the Snapdragon Ride Vision System – an open, scalable and modular computer vision software stack – at this year’s CES. In addition, Qualcomm is evolving the Ride Platform into a more expansive offering called the Snapdragon Digital Chassis.

The Ride Platform goes far beyond Incari’s look-and-feel development platform. It provides a range of options for developing vision-based ADAS and AV systems that incorporate perception and sensing software, which is used for detection, classification and tracking of static and dynamic objects. This platform can be used to develop entry-tier New Car Assessment Program (NCAP) front camera applications to higher levels of automation that harness front and surround-view cameras.

It seems to me that something like Qualcomm’s efforts to develop ADAS and AD systems is necessary, considering the size of the automotive market. In a similar manner, massive efforts are needed to ensure that safety is engineered into future ADAS, AD, AV systems. There have been some recent and spectacular failures of ADAS, AD, and AV systems, and it would be wise to weed out these system defects sooner rather than later.

The rest of the automotive industry may be coming around. In May, Volkswagen’s Cariad software division announced that it will source chips from Qualcomm to develop autonomous driving software, which VW has made the core part of its future strategy. Cariad’s platform aims to enable automated driving up to Level 4 standards, where the car handles all aspects of driving in most circumstances without human intervention. According to Volkswagen, you should expect to see cars from the company with these capabilities appearing around the middle of the decade.

Besides BMW and Volkswagen, General Motors (GM) and Stellantis have also announced that they are teaming up with Qualcomm to develop advanced automotive software. In January, GM announced that Qualcomm chips will power the “Ultra Cruise” driver-assistance feature on a luxury Cadillac sedan – the all-electric Celestiq – next year. In April, Stellantis announced that fourteen of its automotive brands – including Fiat, Jeep, Maserati, and Peugeot – will use Qualcomm’s vehicle cockpit and 5G telematics technology starting in 2024.

Personally, I’m not sure how this is all going to happen given the current semiconductor shortage. When cars are shipping without basic functions like seat heaters because there aren’t enough automotive chips to go around, it’s not at all clear to me how we will be seeing these wonderful ADAS, AV, and AD features appear in cars two or three years from now. However, I’m quite willing to have my skepticism drowned by reality.

One thought on “New GUIs for Old Cars: Development Platforms for Manual and Autonomous Driving”