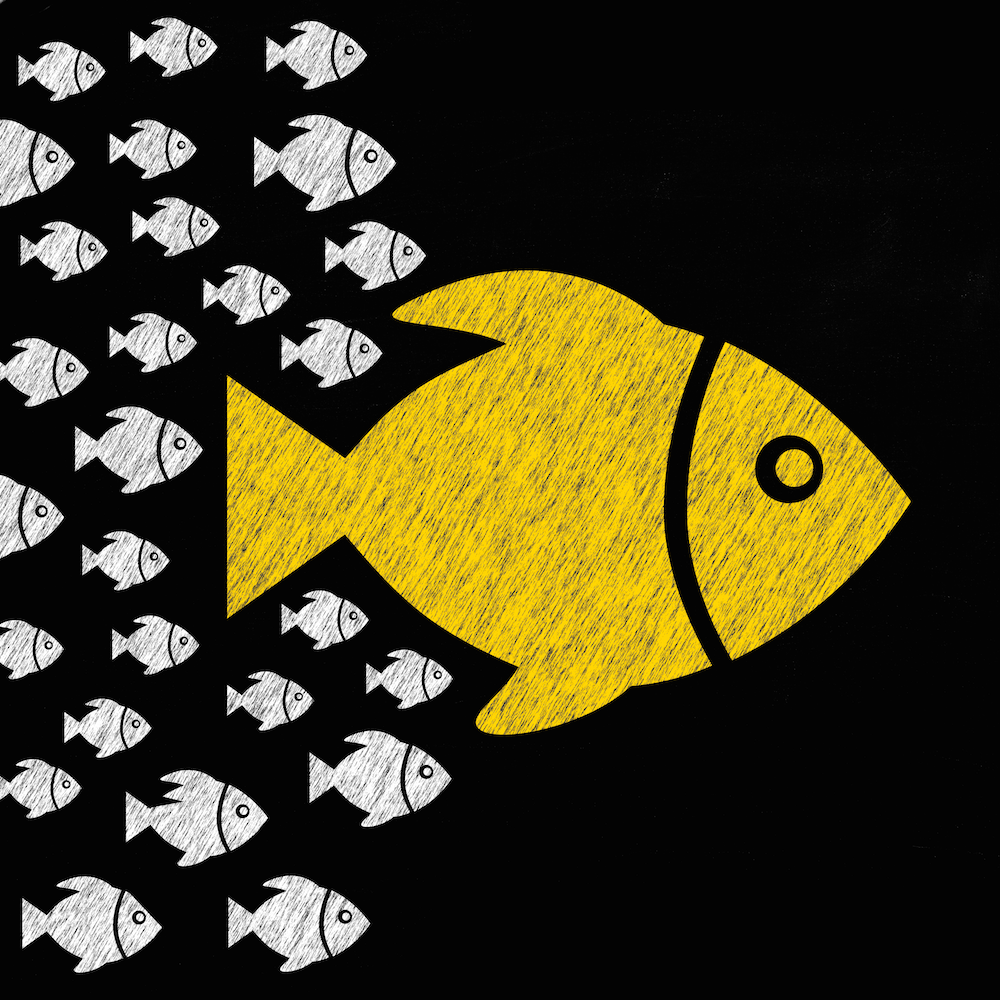 Message to CEOs: Stand Up for Your Company!

If you are in a position to influence someone, you are a leader. – Sheri L. Dew

Today, we’re going far afield from the electronics field, or so it will seem. Be patient, because there’s a big payoff if you hang tight.

This article’s about marketing. Now, let me tell you about real marketing, not that stuff you get in MBO school. The marketing stuff taught to fledgling MBOs is the right stuff for big, consumer companies like Apple, or Ford, or Kellogg’s. But in the electronics world, you’re not making Mustangs or Frosted Flakes for mass markets populated with tens or hundreds of millions of consumers. You’re making software and widgets, and your target audience consists of tens or hundreds of thousands of engineers.

These engineers are as cynical or skeptical as they come. Tell this audience that your software is cool and they’ll yawn. Tell this audience that your widget is the best, lightweight, left-handed, 7nm, green framistan on the market and you’ll hear back that green framistans are not all that desirable and have essentially been obsoleted by right-handed orange thingamabobs, ambidextrous red doohickeys, or some such.

Lately, EOEM vendors have veered away from pitching product and have ventured into the even badder badlands of “thought leadership.” The leading thought on thought leadership is that people tend to buy more and more often from thought leaders. How about a little introspection here? Do you choose between a McDonald’s Big Mac and a Burger King Whopper by going with the franchisor that you consider the more profound, better-informed thought leader?

I cannot count the number of times I’ve been asked to write a “thought-leadership” document for a high-tech company on some topic, and that’s all the instruction I’ve been given. The company expects me to develop the thoughts that represent leadership. In general, my reply is, “Before you can be a thought leader, you need to have a thought.” At least one would be nice.

Far better you tend to reality, which brings us to today’s lesson.

Do you know the important influencers in your company’s world? You should. You’d better.

Case in point: low-cost tool retailer Harbor Freight. If you don’t know Harbor Freight, it’s not because they haven’t tried. This US-only company now has more than 1000 stores and more than 40 million customers. On average, the company opens a new store every three days. That’s at a time when we’re supposedly in the “retail apocalypse,” where former giants such as Sears, K-Mart, Toys”R”Us, Payless ShoeSource, and RadioShack are either shrinking or have already vanished off the face of the earth.

Because it’s large in its own narrow space, Harbor Freight has accumulated an army of influencers, and these influencers chiefly hang out on the InterWebs, where everyone and anyone can be a publisher. Many influencers have established YouTube channels devoted largely to Harbor Freight and its many unique idiosyncrasies, including its almost weekly sales, its pricing, and the variable quality of the tools it sells.

Often in his videos, Red Beard obtains (usually purchases) a Harbor Freight tool and reviews it. He also creates videos that merely walk you through Harbor Freight’s latest sale flyer while he opines on whether the products on sale merit purchase at that price (or at all). Do you have influencers who walk your customers and prospects through every piece of your sales collateral?

On occasion, Red Beard walks through a local store in his new hometown of Las Vegas and records video for one reason or another – usually during a parking-lot sale.

The latest Harbor Freight parking lot sale took place in early March, so Red Beard grabbed his camera, drove to a local Harbor Freight store, and posted a video. However, this 12-minute video was the kind of video you never want one of your influencers to post. Red Beard was angry, and he bared his teeth, which is a real problem in this instance because Red Beard generally appears in his videos using a cartoon avatar. He’s a bear of a guy, as a cartoon and also in real life.

For this angry video, Red Beard appeared as himself, sans avatar. He recorded this particular YouTube video while driving in his pickup truck. Actually, he was driving away from the Las Vegas Harbor Freight store, where he’d just been asked to leave the store, for… recording a video.

Harbor Freight doesn’t compensate Red Beard financially – doing so would diminish his credibility in his viewers’ eyes – but it does provide him with pre-announcement information, under embargo, and it does send him some tools to review. His large viewership is based on his credibility, which I judge to be high. Uncompensated influencers are unlikely to hold back when they’re miffed, and important influencers like Red Beard aren’t likely to tolerate unexpectedly rough treatment without comment. After all, commenting is an influencer’s way of life.

In this recent video recording, Red Beard recounted his ejection from his local Harbor Freight store and noted that at least two other well-known influencers who devote their YouTube channels to Harbor Freight had similar experiences just hours before Red Beard’s experience. Red Beard was blunt.

“This is probably going to be my last Harbor Freight video,” he said. He did one other thing of note in this video. He looked straight into the camera and addressed his comments directly to Eric Smidt, the founder, owner, and President of Harbor Freight.

By the following day, Smidt had posted this comment on Red Beard’s farewell video:

I’m sorry about your experience at our store this weekend. We heard from many other customers who shared similar feedback, and we’re going to fix this. It turns out that this “no filming in stores” policy has been around for years. In fact, most of us had forgotten about it. A few days ago, a routine policy reminder was sent to our store teams. It didn’t take long before our store teams and our customers told us how they felt about the policy. And we all agree. We love it when you and others share reviews of our tools on social media. The reviews help spread the word about Harbor Freight and they help us make our tools better so we can deliver even more value to our customers. We’re sorry about the confusion this created, and effective immediately, we’ll allow customers to take photos and videos of tools as they shop. When they do, we only ask that they respect the privacy of other people in the store.

Keep up the great work…and shine on!

Note that “Shine On” is Red Beard’s personal way of ending all of his videos, and Smidt’s use of that phrase in his comment signals to Red Beard that he, too, is a regular viewer – a “Den of Tools” member.

“Eric you have redeemed yourself with this reply, and I am glad that you realize who puts Jet A in your Gulfstream. It is we the customer.”

Smidt’s direct, timely, and personal reply is a golden lesson in handling key influencers, no matter what market you’re in. Even if you do not like everything they say, you slight or mistreat influencers at your company’s peril; the audiences they deliver to you do care about what influencers say, very much in many cases.

All too often, companies respond to key influencers in the same way they respond to nameless customers:

In my marketing circles, the Customer Service Department is often called the “Customer Prevention” department because these departments are often set up to enforce policy, not solve problems. It’s not smart to treat customers this way, and it’s even less smart to treat influencers this way. There’s a reason they’re called influencers.

I was most recently reminded of this when I had a problem with an Amazon order. My order had been delivered to an Amazon store in damaged condition, and the employees at the store noticed the damage and told me by a prompt email not to pick up the item. Score one for customer service at the Amazon store.

Instead of going to the store to deal with the problem, the email told me to call Amazon’s customer service. Ugh. Amazon isn’t really set up to handle customer service problems by phone. As a dot.com company, Amazon generally provides poor phone service through a bank of heavily accented service representatives. Although the customer service representative did eventually solve my problem, her scripted words and frequent absences to talk with her supervisor told me that we were way off script with this situation and that she was personally empowered to do diddly squat to solve my particular problem.

Eric Smidt, however, is clearly in a position to solve just about any Harbor Freight problem quickly, and without a script, which is exactly what he told Red Beard in his YouTube comment.

In my experience, the answer to that question will largely be determined by the leadership shown by your company’s CEO.

There are far fewer influencers (and a few remaining editors, ahem) in the EOEM arena than in the retail world. Consequently, the questions raised in this article and the answers to those questions could have an outsized effect on your business.

Some of you readers out there will think that this article is too self-serving. That’s OK. You’re entitled to your opinion. However, consider this: who else can give you this particular perspective on this particular topic?

One thought on “Message to CEOs: Stand Up for Your Company!”