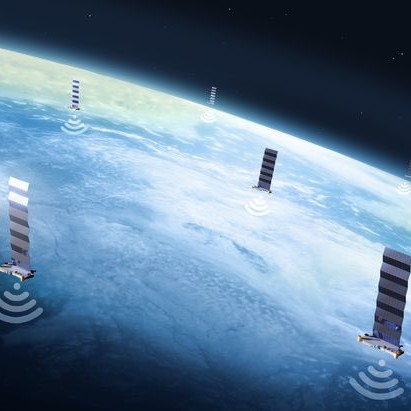 MathWorks’s Satellite Communications Toolbox is Out of This World!

If you had asked me about the folks at MathWorks a few days ago, I might have waffled on about all of the traditional stuff for which they are internationally (and deservedly) renowned. I might even have made mention of their recently introduced artificial intelligence (AI) and machine learning (ML) capabilities (see also Want to Learn AI? But Where to Go?). However, if the truth be told, I probably wouldn’t have thought to reference them in the context of designing next-generation satellite communications systems… until now.

My newfound knowledge is the result of a recent conversation I had with Houman Zarrinkoub, who is Senior Wireless Product Manager at MathWorks. I have to say that I really enjoyed our chat because Houman is full of energy and good humor, and he went out of his way to make things fun and interesting. Just to establish Houman’s bona fides, we should note that he has a PhD in Wireless Communication, he used to work for Nortel Networks (which was a bit like a Canadian version of CISCO), and he joined MathWorks around 20 years ago as Development Manager for Signal Processing and Communication. About three years ago, Houman decided the time was growing ripe to address a need to provide tools to design and verify the next generation of satellites, resulting in the March 2021 launch (no pun  intended) of the Satellite Communications Toolbox, which lets us simulate, analyze, and test satellite communications systems and links.

But I fear I am getting ahead of myself, so let’s take a step back, breathe deeply, and take a moment to set the scene…

In the context of spaceflight, a satellite is an object that has been intentionally placed into orbit around the Earth. These objects are more properly referred to as “artificial satellites” to distinguish them from natural satellites such as the Earth’s Moon.

Satellites aren’t new. As far back as 1945, the English science-fiction writer, science writer, futurist, inventor, undersea explorer, and television host Sir Arthur Charles Clarke began to promote the idea of using geostationary satellites as communications relays. In this case, the satellite is in a geostationary orbit — that is, a circular orbit 35,785 km (22,236 miles) above the Earth’s Equator. The satellite’s orbital period is equal to the Earth’s rotational period of 23 hours and 56 minutes, which means the satellite appears to be stationary in the sky from the perspective of an observer on the ground. With three (or more) equally spaced geostationary satellites, it’s possible to communicate between any two points on the Earth (e.g., Earth to Satellite #1 to Satellite #2 to Earth).

Arthur also wrote The Sentinel as an entry to a BBC Competition. It was rejected (I bet they feel silly now), but it later formed the basis for the epic 1968 movie 2001: A Space Odyssey, which is one of my all-time favorite films. I’m still hoping that someone will make movies of some of Arthur’s other books, such as Rendezvous with Rama and A Fall of Moondust (I couldn’t help myself — I just ordered a secondhand copy of The City and the Stars from Amazon — every now and then I’ve had a fleeting memory of this tale, but I’d forgotten its name and author until just now when I was perusing and pondering the Wikipedia page on Arthur).

As we previously noted, satellites aren’t new. For example, according to Satellite Signals, as of 21 July 2021, there are currently 538 of the little rascals in geostationary Earth orbit (GEO) as I pen these words, and don’t get me talking about satellites in geosynchronous Earth orbit (GSO), medium Earth orbit (MEO), low Earth orbit (LEO), Polar orbit and Sun-synchronous orbit (SSO), transfer orbit and geostationary transfer orbit (GTO), or satellites hanging out at the Lagrange points (L-points) (you can discover more about the different types of orbits on the European Space Agency website).

Actually, when I say, “little rascals,” these bodacious beauties are typically anything but. Unfortunately, there is no official globally accepted classification system for satellites, but the five general categories used by the North American space agencies are as follows (most GEO satellites would fall into the “Large” category):

All of the above “similar in size” statements refer to the body of the satellite — not to its solar panels, which can unfold or extend to be much, much larger.

What is new is the current trend to launch large constellations of LEO satellites to facilitate wireless connectivity for everyone. For example, Jeff Bezos/Amazon’s Project Kuiper is a planned mega-constellation of 3,236 LEO satellites, of which the first two should be launched by late 2022; more than half are planned to be in space by 2,026, with the remainder scheduled to be in orbit by 2029. Meanwhile, Elon Musk/Space X’s Starlink constellation already comprises 1,700 satellites in orbit, with 12,000 planned by 2026 and 30,000 more to follow. There are, of course, many other players, but I think we get the idea.

These LEO satellites typically weigh in at around 250 kg and are said (although I don’t know who said it) to be about the size of a table (which really doesn’t tell us much at all).

A low Earth orbit can be anywhere from 500 km to 1,000 km (actually, although most sources seem to agree on the upper value, the lower number can vary depending on who you are talking to). One point to consider here is that Earth’s atmosphere is said to be around 480 km thick, with most of the atmosphere being within 16 km of the surface. However, there’s no hard cut-off, so an LEO satellite orbiting at 500 km is going to experience a miniscule amount of drag. Thus, these little rascals are equipped with ion engines that allow them to make small speed and trajectory adjustments.

The idea is for next-generation smartphones to be enhanced to support this form of communication to provide ubiquitous connectivity, with Wi-Fi as a mode, cellular as a mode, and satellite as a mode (even Bluetooth as a mode, because if you are close enough to a Bluetooth device you can route through that). This is the vision of the future — to be able to route our data through any available access to the network using super-smart smartphones (and tablets and…).

The latency for a radio signal to travel from the Earth to a GEO satellite 35,785 km above the Earth’s surface and back again (including the satellite receiving and re-transmitting the signal) is around 600 milliseconds. By comparison, the same signal travelling to and from a LEO satellite has a latency of only around 40 milliseconds or less.

The problem is that, unlike GEO satellites that plod along (relatively speaking) at approximately 11,300 km/h and are stationary from the perspective of an observer on the ground, LEO satellites are much closer to the surface and are racing across the sky at around 27,000 km/h, completing a full circuit of the planet in 90 to 120 minutes, which means they are only in “sight” for a few minutes at most. Also, unlike GEO satellites that always orbit along the Earth’s equator, the planes of LEO satellite orbits can be tilted with them each following a different path. Think of this as a monster wireless mesh whose nodes are travelling in every conceivable direction at 27,000 km/h. So, in addition to your call being handed off from one satellite to another every couple of minutes, the satellites will need to use multi-hop links to transfer your call from satellite to satellite to satellite to… before it eventually makes its way back to the ground. Apart from anything else, LEO satellites must accommodate significant Doppler effects when receiving signals from the ground and each other.

This is where simulation and modelling come into the picture, because everything has to be taken into account before we send these satellites into space. Early adopters of any new technology create their own proprietary tools, but they typically don’t share these tools, which cost a fortune to maintain, so they eventually migrate to a commercial offering that’s evolved to be more comprehensive and more robust.

Of course, satellite communication has been around for a long time, and there are tools that are already out there that can be purchased for a price, but these tools tend to address only portions of the problem. This is where the guys and gals from MathWorks leap onto the center stage with MATLAB and its cornucopia of comprehensive toolboxes, including the latest and greatest Satellite Communications toolbox. In conjunction with other toolboxes, all of which are standards-based, this enables designers to visualize and control every aspect of a satellite’s orbit and trajectory, measure exactly how much link budget and energy is available on the satellite and at the ground station, model all of the modulation and encoding required to receive and transmit, and to do all of this for multiple satellites simultaneously as required.

As Houman told me, “There are many, many beautiful technical challenges. They are all doable, but it’s necessary to handle them all together. You can’t just say “this part is not my problem’ because the RF and antenna and base band and encoding and… everything else is all one problem.”

Until now, satellite communications couldn’t provide a cost-effective alternative or augmentation to cellular and Wi-Fi and so on, but technology has advanced. Now, with LEO satellites so close to the Earth, performance and speed can be comparable to cellular. The bottom line is that, before long, it won’t matter if you are in the middle of a city or in the heart of a desert, or at the bottom of a valley or on the top of a mountain. If you can see a satellite — and you will always be able to see a satellite because tens of thousands of the little scamps will be racing across the skies around the world — you will have connectivity. How about you, do you have any thoughts you’d care to share on any of this?

2 thoughts on “MathWorks’s Satellite Communications Toolbox is Out of This World!”