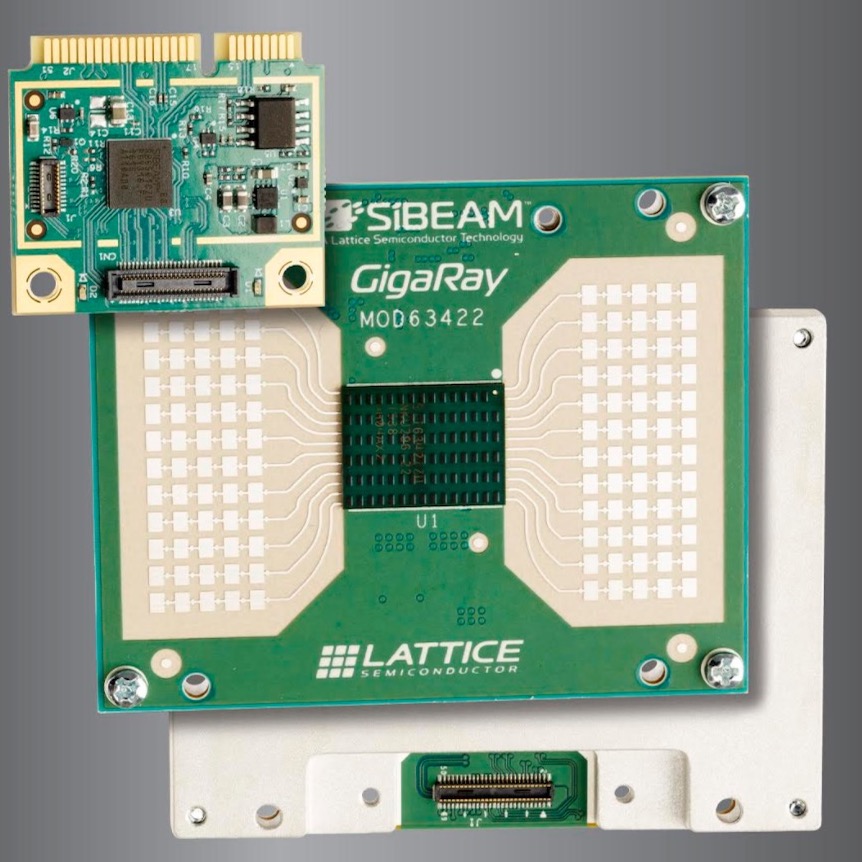 When you’re building out network infrastructure, it’s often that last hundred meters or so that causes the most headache. Sure, there are challenges getting all the huge pipes and big switches to handle the massive bandwidth reliably, but things sometimes get the trickiest when we make that final run to the subscriber. Ethernet cables, fiber, and other wired solutions are expensive, difficult to install, high maintenance, and finicky. What we’d really like is a high-bandwidth wireless solution that would be cheap, easy to install, and reliable.

Lattice Semiconductor’s SiBeam subsidiary just announced a new, modular solution for short range millimeter-wave (66Ghz) wireless infrastructure. SiBeam, which was founded in 2004, was picked up by Lattice in 2015, as part of the Silicon Image acquisition. SiBeam specializes in millimeter wave technology implemented in CMOS. SiBeam has been selling 60 GHz solutions for wireless HD video transmission and wireless connector replacements for USB.

60GHz is an interesting part of the spectrum for several reasons. First, it is unlicensed, so (unlike mobile wireless bands) no huge investment is required to procure spectrum. Obviously, it is a short range technology, but there are numerous applications where short range, low power, high bandwidth connections are just the thing. SiBeam’s solutions span the gamut from ultra-short range (a few centimeters for their “Snap” wireless connectors that replace USB cables), to a few meters for their WiHD indoor HD video solutions, and now to a couple hundred meters for the newly-announced GigaRay.

GigaRay uses phased-array antennas and beamforming to steer fairly narrow signal beams from one node to the next. Beamforming is one of the key differentiators that distinguishes GigaRay from other, mechanically-aimed 60GHz offerings. GigaRay can use electronic beamforming to steer the signal +/- 45 degrees. Because the beams are narrow and the signal propagation is short, significant spatial re-use is possible, making GigaRay ideal for high-density urban environments.

GigaRay can deliver up to 2 GHz channels, making significant bandwidth available. At a range of 200 meters, GigaRay can manage 1 Gbps throughput on TCP/IP, and at 300 meters range it can still handle 300 Mbps. Lattice is showing a slick physical example of a solution – “Wireless Backhaul in a Box” that integrates an entire 60 GHz node in a 20 x 10 x 3 cm enclosure, with only a Gigabit Ethernet (with PoE) connection external interface. The little node weighs less than 1 Kg and uses less than 10W. The small form factor makes the solution extremely friendly with “street furniture” (utility poles and such), and, combined with the dynamic, self-configuring, electronic aiming links – makes installation/deployment simple and inexpensive.

The GigaRay MOD65412 60 GHz Module Set has all the heavy lifting done for you. There is no baseband or RF design required, as the antenna array and all the beamforming magic are already built into the modules themselves. The solution consists of two modules – the SiI6342 60 GHz RF transceiver with PCB antenna array and integrated shield for EMI & thermal management, and the SB6541 60 GHz baseband processor, which is delivered in a half-height PCIe mini card. Integration should be easy through the standard PCIe interface using Linux open source device drivers. The modules already have FCC regulatory certification, and other regions are under evaluation.

Lattice also offers a “Mini PC-based development kit” (SK65415 Starter Kit) that includes the integrated baseband and RF module set, connected to a mini-PC with Intel Core i5 dual-core processor, 64GB SSD, 4GB memory, Linux Fedora 19 distribution, evaluation software, and performance measurement utilities installed. This should get developers up and running in short order, and the simplicity of the GigaRay modules themselves should make design a snap.

Lattice expects to see these 60 Ghz wireless solutions in a variety of applications such as wireless broadband (instead of cable or fiber for the last run to the subscriber), Metro WiFi /
4G LTE small cell, and enterprise/smart city connections (for example from one building to another of a campus), rather than running fiber or cable. In all of these scenarios, it appears that 60 GHz wireless would offer compelling advantages in convenience and cost of deployment. The market for such solutions could be enormous, as penetration of broadband worldwide is still very low and there is substantial infrastructure build-out underway.

Compared with fiber (the normal go-to choice for such applications), GigaRay is cheaper, easier to install, easier to re-deploy or reconfigure, and easier to scale. The cost of fiber deployments means that significant demand is required to justify ROI, but the much lower barrier to entry offered by GigaRay could create a very attractive alternative for many situations. The ability for a simple install of a lightweight device with only an Ethernet connection and no complex mechanical aiming means broadband installations could be deployed and/or reconfigured literally overnight.

With strong product introductions such as GigaWave, Lattice continues to redefine itself – building a new brand that transcends the decades-long image of an “also-ran” in FPGA technology against Xilinx and Altera. Now, the company has carved out a significant market for itself (in consumer and communications markets in particular) where its former rivals do not play. While the recent failed acquisition may have been seen as a loss for shareholders, it appears that it has provided a rich opportunity for the company to clearly differentiate themselves with their technology and thoughtful solutions.