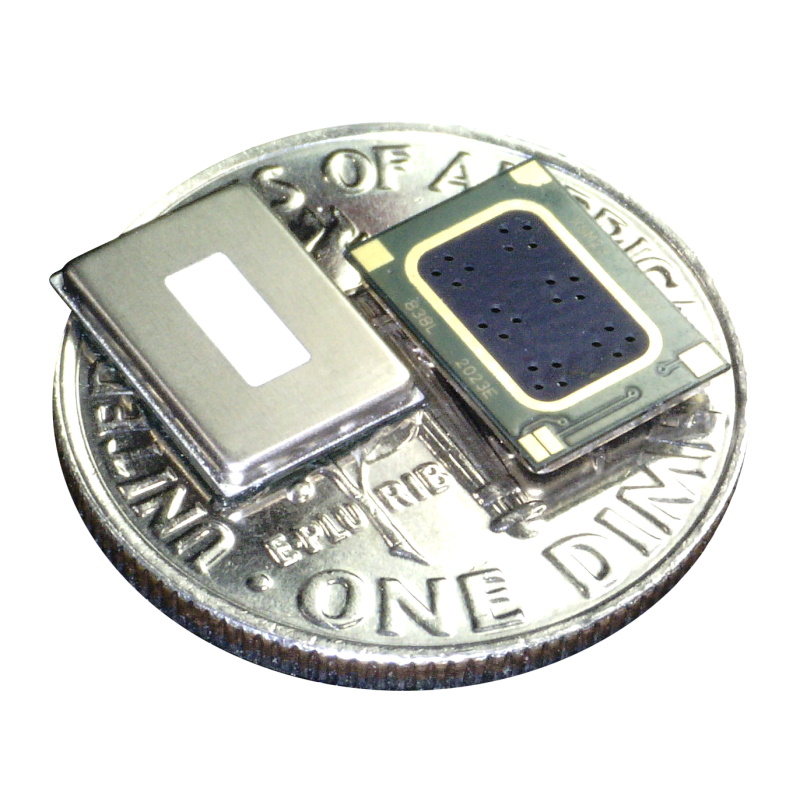 I’m being exposed to all sorts of cool technologies these days. Unfortunately, one of my problems – in addition to (a) being hounded by hordes of groupies at engineering conferences and (b) the fact that my groupies are all curmudgeonly old male engineers – is that I’m easily distrac… SQUIRREL!

I’m sorry. Where were we? Oh yes, you wanted to know about my Aunt Joan. She wasn’t a real aunt, if the truth be told, but she was known to my family for eons before I made my entrance on the scene, so she was gifted with the “Aunt” honorific when we were finally introduced.

Aunt Joan was a dear old stick, but she was a deaf as a post. Circa the 1960s, she sported what might laughingly be classed as an electronic hearing aid that, size-wise, was only one small step down from a Victorian ear trumpet (it was possibly even less effective performance-wise).

I don’t think the designers of this beast had even considered boosting selected frequencies based on its owner’s hearing capabilities. Instead, it just amplified the heck out of any sound it detected in the vague hope that something would get through.

At parties and family get-togethers, Aunt Joan was invariably to be found fiddling with her hearing aid in a desperate attempt to gain a clue as to what everyone else was talking about. Unfortunately, the hearing aid responded with aircraft-landing-in-distress levels of shrieks and whistles. Thus, a large part of the conversation centered on how annoying Aunt Joan’s hearing aid was. In my case, this just made my eyes water and left my ears ringing, but it must have been extremely disconcerting for people of my parents’ generation who had lived through the whistles of bombs falling during the Second World War (see also The Times They Are a-Changin’ Part 1, Part 2, and Part 3).

In a recent column, DSP Group Dives into the Hearables Market, I talked about how the term hearables (some call them smart headphones) refers to technically advanced electronic in-ear-devices. For example, wireless earbuds or hearing aids that fit in the ear canal and use a processor to implement digital signal processing (DSP) techniques to enhance the wearer’s listening experience.

I also mentioned that the DSP Group had acquired a company called SoundChip SA, which is a leading supplier of active noise cancelling (ANC) technology. The DSP Group’s latest and greatest product is the DBMC2-TWS (where TWS stands for “True Wireless Stereo”), a block diagram of which is shown below. 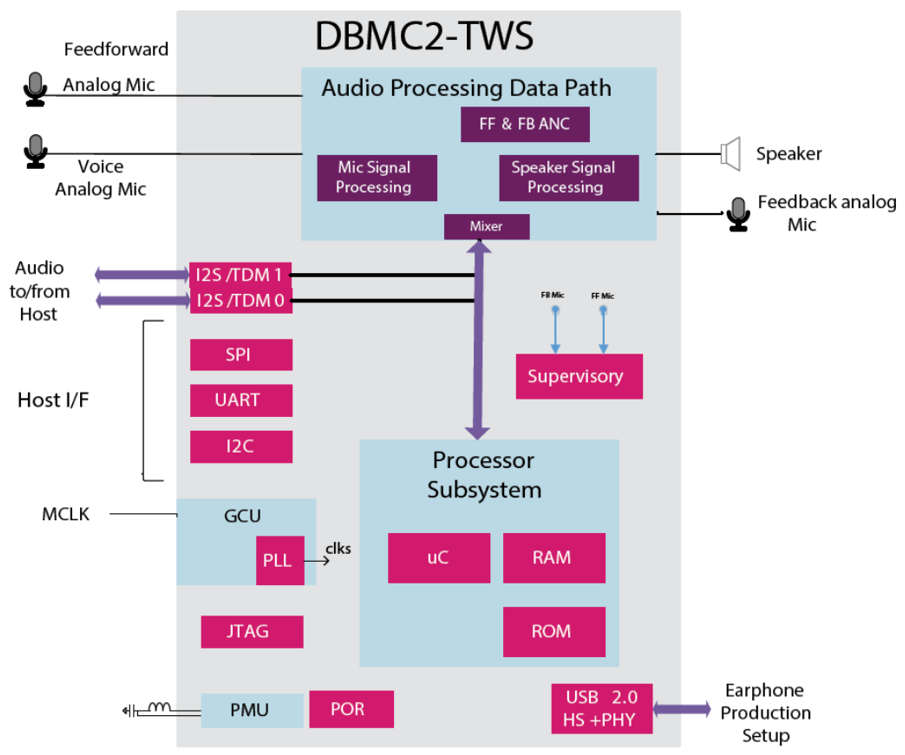 Observe that there are three microphones, with the third (the “Feedback analog mic”) being located in the ear canal itself. Dear old Aunt Joan would have thought that all her Christmases had come at once had she been presented with a pair of hearing aids based on this technology.

But that’s not what I wanted to talk to you about.

Take another look at the block diagram above. In particular, observe the innocuous “speaker” annotation. To be honest, this really wouldn’t have caught my attention had I not already been talking to the folks at xMEMS. I really wanted to tell the guys and gals at the DSP Group about what the folks at xMEMS were working on, but I could not do so because I had been sworn to secrecy.

Happily, the chaps and chapesses at xMEMS have now emerged from stealth mode and staggered out of their secret underground bunker into the light of day to “reinvent sound,” as they modestly put it. In a nutshell, they’ve created the world’s first monolithic true MEMS speaker. In the image below, each square is an individual speaker cell, where the number of cells can be reduced or increased to satisfy the cost and performance requirements of different designs. 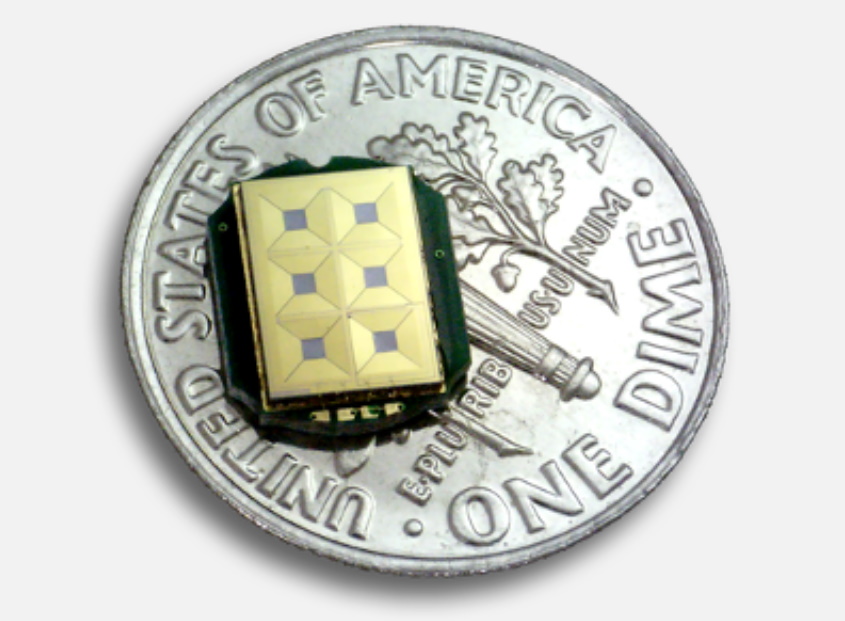 The term “loudspeaker” generically refers to an electroacoustic transducer that converts an electrical audio signal into a corresponding sound. I just had a quick Google while no one was looking. According to Wikipedia, the self-taught German scientist and inventor, Johann Philipp Reis, installed an electric loudspeaker in his telephone in 1861. My first reaction on hearing this (no pun intended) was that this was a pretty good trick since Alexander Graham Bell didn’t actually invent the telephone until 1876, but that just goes to show how little I know.

Following another surreptitious Google (I really need to start limiting myself, otherwise the neighbors will talk), I discovered that 1876 was the year that the aptly named Bell won the first U.S. patent for his incarnation of the device. In fact, the Italian innovator Antonio Meucci is now credited with inventing the first basic phone in 1849, and Frenchman Charles Bourseul devised his own phone in 1854. I tell you – I learn something new every day.

The most widely used speaker at the time of this writing is the dynamic speaker, which is based on a coil of wire suspended between the poles of a permanent magnet. The coil is also attached to a diaphragm. When an alternating current electrical audio signal is applied to the coil, it causes a diaphragm to move back and forth, “pulling” and “pushing” the surrounding air to create soundwaves.

As an aside, the first experimental moving coil loudspeaker was invented by British physicist Oliver Lodge in 1898; the first practical moving-coil loudspeakers were manufactured by Danish engineer Peter Laurits Jensen and American electrical engineer Edwin Pridham in 1915, in Napa, California; and the moving-coil principle commonly used in today’s speakers was patented by American electrical engineer Chester Williams Rice and American inventor Edward Washburn Kellogg circa the mid-1920s.

The point is that, whichever way you look at it, no matter how cunning the signal processing technology we use, the final delivery mechanism used to present sound to our ears is based on 100-year-old technology.

Why is this important? Why do we care? Well, I’m glad you asked.

I think we are all so used to automated processes, tight tolerances, and high levels of repeatability that it comes as something of a shock to learn that the traditional moving-coil speakers used in headphones and earpieces are a tad less ideal than one might hope. In addition to requiring a significant number of manufacturing and assembly steps to be performed by hand, one of the last steps in the process is for a person to root around in a tray of speakers trying to find two that provide a close enough match in terms of their audio characteristics and responses. This isn’t quite what I was expecting to hear about in 21st century hearables if you’ll forgive the pun.

Further dampening the mood, not to mention their frequency response, the quality of sound provided by the traditional moving-coil speakers used in headphones can easily be degraded by dust and moisture. Their manufacturers can claim “sweat resistant” all they want, but we all know what this means in the real world.

By comparison, MEMS speakers — which are presented as sealed units under a silicon membrane — are smaller, lighter, more rugged (they have a 10,000g mechanical shock resistance), consume a fraction of the power, and are inherently dust and water resistant. Furthermore, the MEMS fabrication process is inherently repeatable, which means that the response characteristics of any two devices selected at random are so close as to bring tears of joy to an audiophile’s eyes.

Now, piezo speakers have been around for quite some time, so why aren’t piezo-based MEMS speakers used all over the place? Well, the sad truth is that, until now, the quality of sound they produced was pretty rubbish, so their role has been largely constrained to acting as buzzers.

This is where the folks from xMEMS enter the picture. They tell me that new advances in materials technology coupled with a bunch of design innovations have finally allowed them to create MEMS speakers that people actually want to listen to.

Personally, I think the guys and gals at xMEMS are sitting on a silicon gold mine, if you see what I mean. There were 43 million pairs of TWS earphones shipped in Q3, 2019, at which time they officially became the largest category in the smart personal audio device market.

To provide a comparison, consider MEMS microphones. Initially, these took some time to gain traction in all but the most rudimentary applications. Over the past 10 years, however, MEMS microphones have come to dominate the mainstream market. If the MEMS speakers from the guys and gals at xMEMS are as good as they say they are, and I have no reason to doubt their word, then MEMS speakers could well come to dominate the hearables market in the next couple of years.

Strange to relate, I almost purchased a new set of earbuds a couple of days ago, but I’m not desperate and – after hearing the news from xMEMs — I think I might wait awhile to see what develops. What say you?