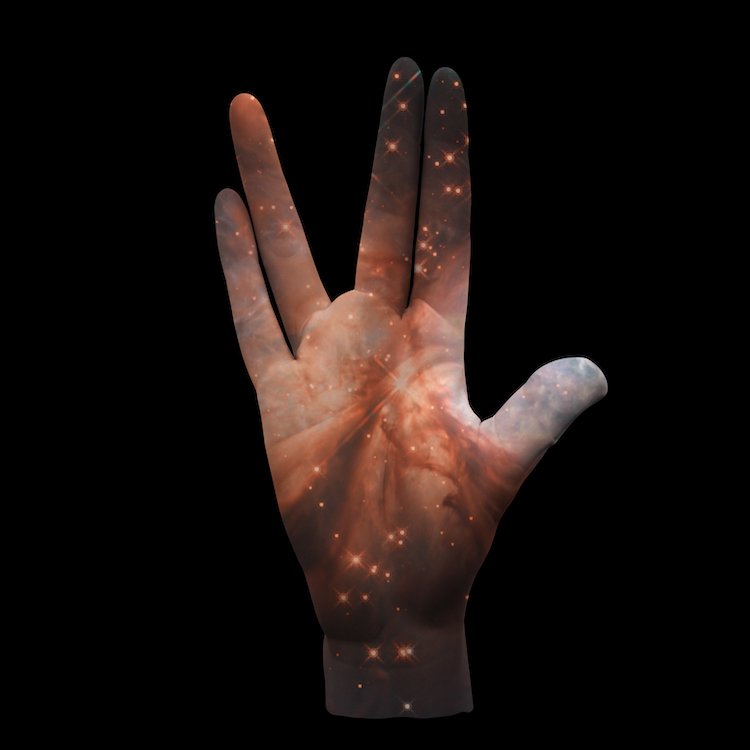 I Was Mr. Spock’s Science Officer, For a Day

I’ve been reading science fiction (SF) since the second grade. The first SF book that I read was “The Space Witch” by Don Freeman, which I promptly plagiarized. That book was published in 1959 and I read it a couple of years later. By fourth grade, I’d graduated to the Heinlein juveniles starting with “Have Space Suit Will Travel,” which psychically transported me out of my fourth-grade classroom for at least two hours while other classroom activities took place around me. I was oblivious. Fortunately, my fourth-grade teacher Mrs. Fraas refused to disturb a student so deeply enmeshed in reading a book.

Nothing in my SF experience has ever affected me as deeply as Star Trek, especially The Original Series (TOS) from the mid 1960s. I was captured from the first episode. While studying for my BSEE degree at Case Western Reserve University, I penned a weekly comic strip based on a satirical and cynical fusion of Star Trek TOS and campus life. I named the strip “Star Trash,” based on one of the early reviews of my efforts. “Star Trash” ran for three years and eventually appeared in both university newspapers, sequentially. “Star Trash” the comic strip begat “Star Trash” the movie, made in my senior year, which you can find on YouTube. It’s not going to win awards, but I made it with a $200 budget – special effects and all.

Like many, the Star Trek TOS character I most identified with was Leonard Nimoy’s portrayal of Spock. I dressed as Spock during Halloween. I played Spock in my own movie because the character’s invisible, so it was easy to direct while speaking the lines, all dutifully recorded on Super8 sound film. That was 1975.

Fast forward a quarter of a century when I’d become the Editor in Chief and VP of Content for “Microprocessor Report.” The Editor in Chief of “Electronic Business,” Kathleen Doler, breezed into my office and said that she’d gotten a phone call from Burbank. The CNBC infomercial series, “The Next Wave with Leonard Nimoy,” needed a technology expert to tape an episode with Nimoy, and she didn’t have time for such things. Would I be interested?

I’d never heard of this show, but this is one of those times in my life when I could see the planets align.

My decision took nanoseconds. “Of course,” I said, “I’d be happy to do that.”

I phoned the show. The episode in question would be about touchscreens. Could I serve as a credible technology expert on touchscreens? Now this was the year 2001 and touchscreens were sort of new. Membrane, resistive, capacitive, and optical touchscreens were all vying for niches. It would be another six years before Steve Jobs and Apple would make touchscreens the obvious and ubiquitous user interface for mobile phones, and then for nearly everything else from gas pumps, to microwave ovens, to retail displays and kiosks, and of course to PCs.

It took me another nanosecond to answer: “Yes, of course I am an expert on touchscreens and I would be happy to appear on that episode with Mr. Nimoy as his technology expert.”

Then came the next question: “We’re also shooting another episode that day. It’s about eCommerce. Can you serve as an expert on that?”

One more nanosecond: “Of course.”

Today, in 2022, eCommerce is no big deal. The credit card companies are fully engaged, alternate payment methods such as Square and micropayments have appeared (and many have disappeared), and cryptocurrency is all the rage for speculators. However, in 2001, it wasn’t clear how successful eCommerce would be.

None of that mattered to me at the time. If Leonard Nimoy needed an expert in brain surgery, warp drives, dilithium crystals, or any other subject, I was determined to be that guy. The person at the other end of the phone was delighted to cover both of the day’s episode segments with one “expert,” and I got the nod.

On the appointed day, I dressed in my best double-breasted suit with a carefully chosen lucky purple shirt and a colorful Jerry Garcia tie; drove to the San Jose airport; boarded a Southwest flight to Burbank, California; and walked (yes, walked) from the airport terminal to the TV studio. The walk took half an hour once I figured out how to exit the Burbank airport on foot. It wasn’t really designed for pedestrian access. I had a printout from MapQuest with street directions to the studio.

At the rather small and nondescript video studio, I was greeted and ushered into makeup. All new for me. Then I went on set and waited for Leonard Nimoy to appear. He hosted the show and directed from the host chair on set. By this time, Nimoy had directed several films including two Star Trek films (III and IV), “Three Men and a Baby,” “The Good Mother,” and others. He was at ease when it came to directing. When he was not on set, he was not available. He was a very busy guy.

I watched him carefully, trying to absorb as much as I could from the experience. I like to think that I retained some of what I saw and that his lessons helped me produce live events such as the Microprocessor Forum and trade show booth skits featuring card-carrying actors (including multiple Star Trek themed performances and a battling robot competition) at Embedded Design Conferences in San Jose, Embedded World in Germany, and the Design Automation Conference. These event presentations were extremely successful, and I owe some thanks for those successes to my day with Mr. Nimoy in Burbank.

When it came time for me to expound on touchscreens, I explained the different types of touchscreens and their relative advantages to Mr. Spock, er Mr. Nimoy. Then I pulled out a prop I’d brought: an early Sony RM-AV2100 “Remote Commander” universal remote control. It was a large, ungainly thing that was hard to hold. If you made a mistake and pressed the wrong button, as we did on the set, it went into a long string of uninterruptible beeps.

Nimoy was good natured about it all. The Sony remote was not a great touchscreen example, but that didn’t matter. I was sitting next to Leonard Nimoy and we were bantering about the prop I’d brought. What a grand day!

I was Mr. Spock’s science officer. For the day, anyway. 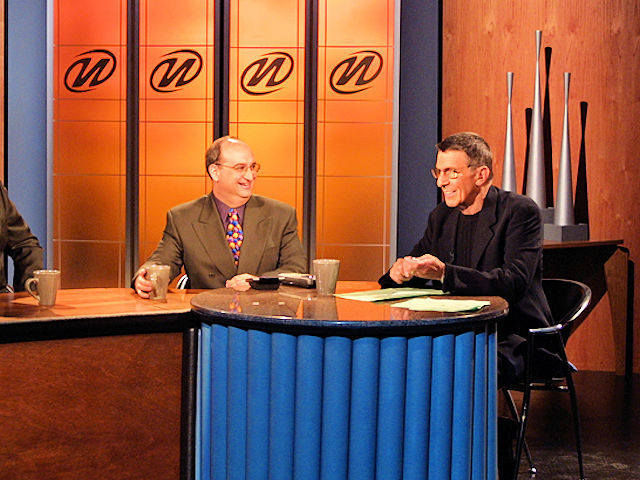 Bantering on the set of “The Next Wave with Leonard Nimoy” in 2001. (Shot with a Sony Digital Mavica camera directly to a 3.5-inch floppy disk.)

We finished taping the touchscreen segment in the morning and broke for lunch. I ate at a table in an unfinished room along with some people from the crew while Nimoy went off to his dressing room to handle his many business relationships.

In the afternoon, we taped the eCommerce segment for another episode of the show. After we finished, I thanked everyone, including Mr. Nimoy, walked back to Burbank airport in the late afternoon sun, boarded my Southwest flight back to San Jose, and was safely in my condo an hour and a half later.

These memories came back to me recently while reading Nimoy’s second autobiography, “I am Spock.” He published this book in 1995, six years before I met him. Consequently, there is no mention in the book about the infomercial series where Nimoy plays an investigative reporter delving into all sorts of new and exciting technologies. In fact, if you Google “The Next Wave with Leonard Nimoy,” you won’t find much about the show, which aired on CNBC for only a couple of years.

By coincidence, both the technologies we covered that day – touchscreens and eCommerce – have become omnipresent in our daily lives. We routinely interact with touchscreens multiple times a day in the form of smartphones and give them little thought. Anyone who orders from Amazon, eBay, or myriad other online vendors or who pays using PayPal, Apple Pay, Google Pay, Zelle, or Venmo is deeply immersed in eCommerce.

That day in Burbank was certainly one of the highlights of my life. Sadly, Leonard Nimoy passed away early in 2015 of COPD at the age of 83. He suffered from it for decades and he knew it had been caused by his smoking habit. He even mentioned its onset in “I am Spock.” Though he’d quit smoking three decades before his death, the cigarettes still got him.

If you’ve been touched by Leonard Nimoy’s acting, especially by that one role for which he’s best known, I commend “I am Spock” to you. It’s a fast read. After reading it, I feel closer than ever to both the actor and a character that so positively affected my life – and the lives of many scientists and engineers – for more than half a century.

3 thoughts on “I Was Mr. Spock’s Science Officer, For a Day”