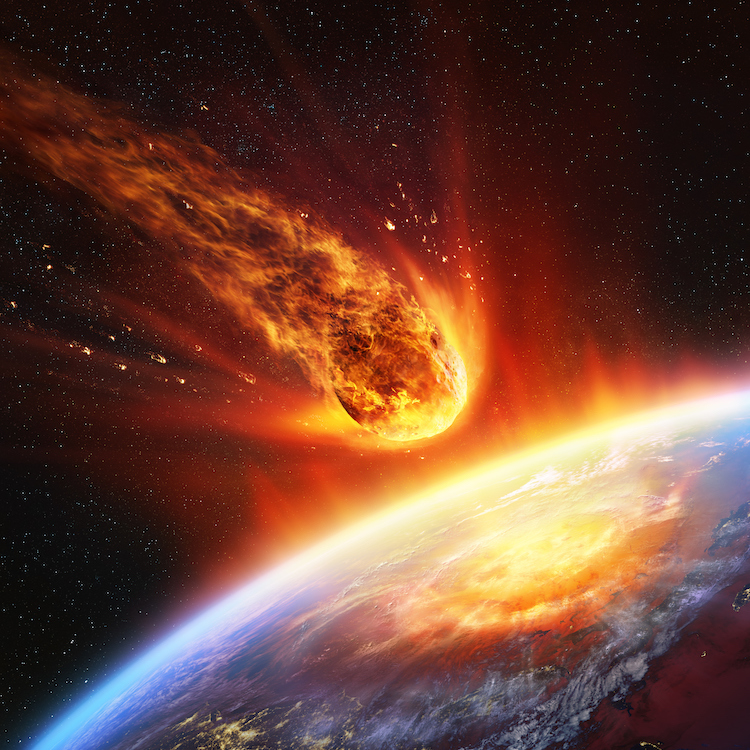 FPGA Saves the World (Sort of)

On Sept. 26, 2022, at 7:14 pm EDT, NASA’s DART (Double Asteroid Redirection Test) spacecraft slammed into an asteroid moonlet called Dimorphos, which orbits around a larger asteroid named Didymos. Dimorphos, roughly 163 meters in diameter, was not threatening anything. It was minding its own business, circling Didymos, when a spacecraft from Earth, roughly the size of a vending machine, rudely crashed into the mini moon. The DART mission, launched on November 24, 2021, is the world’s first test of a potential planetary defense mechanism against asteroids that might potentially hit the Earth and cause tremendous damage with massive loss of life.

The DART mission uses kinetic impact in an attempt to deflect an asteroid, in contrast to the nuclear weapon used to destroy an asteroid in the movie “Armegeddon.” Of course, the impact demolished the spacecraft, even without the use of nuclear weapons. It will take a few weeks of observation and analysis of Dimorphos’s orbit around Didymos to see if the moonlet even noticed.

The DART spacecraft zeroed in and scored a bullseye on Dimorphos, thanks in part to an excellent imaging system that allowed the spacecraft to track the complex trajectory of a small asteroid in orbit around a larger asteroid that was also moving through space. DART’s navigation system leverages missile guidance algorithms developed at Johns Hopkins Applied Physics Lab (APL) for the US military. Johns Hopkins APL also manages the DART mission for NASA’s Planetary Defense Coordination Office, as a project of the agency’s Planetary Missions Program Office. 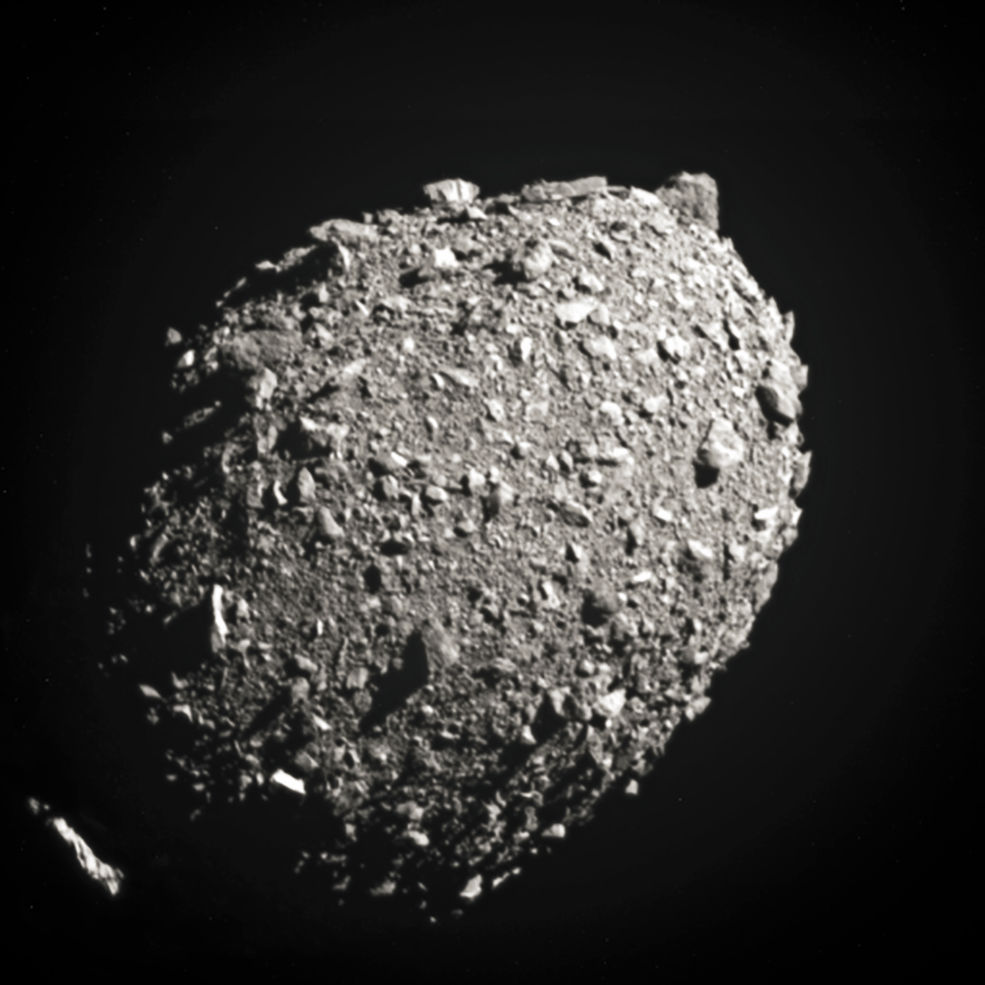 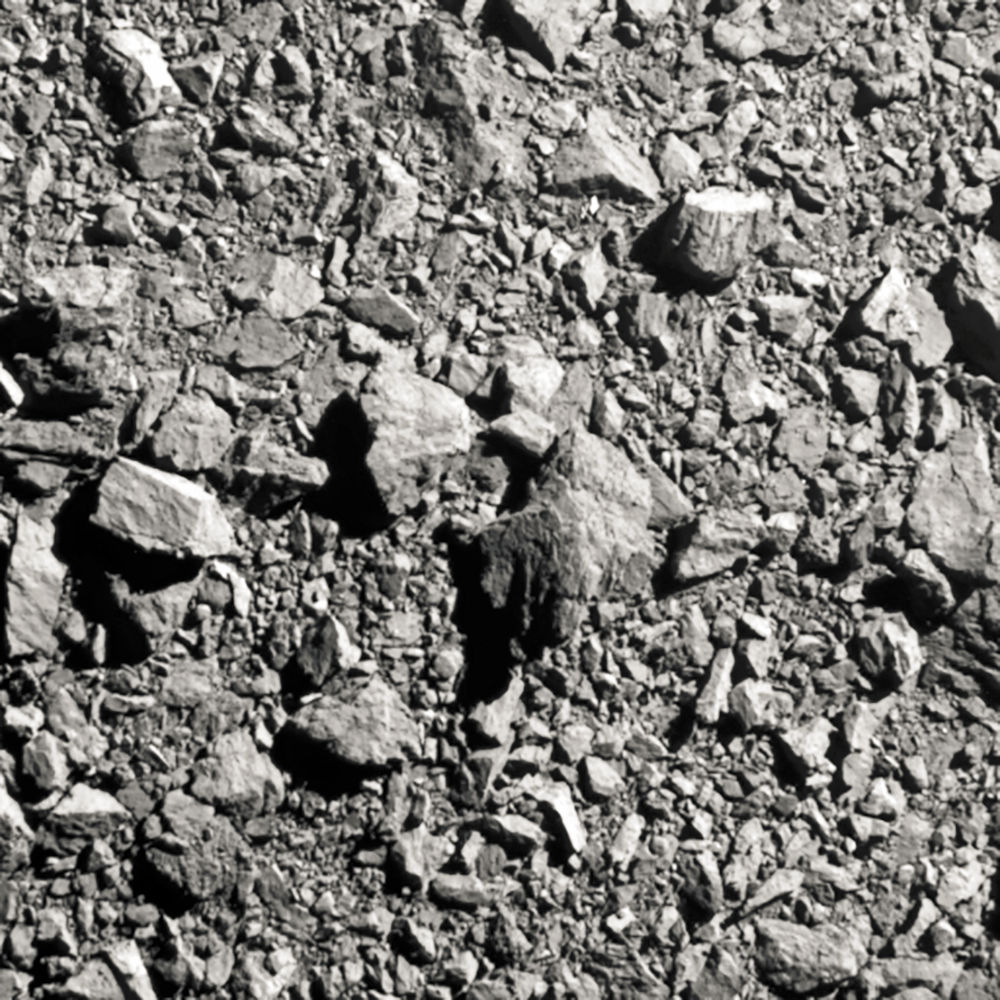 The 1,260-pound (570-kilogram) DART spacecraft slammed into Dimorphos at roughly 14,000 miles (22,530 kilometers) per hour after capturing the above image. The subsequent video frame, captured one second later, contains only a partial image of the asteroid. The rest of the frame is blank because the spacecraft obliterated itself on impact while transmitting that image.

These images came from DART’s Didymos Reconnaissance and Asteroid Camera for Optical navigation (DRACO) system. DRACO, along with the spacecraft’s sophisticated guidance, navigation, and control systems, guided the spacecraft to its successful impact. Multiple ground-based telescopes and the Hubble Space Telescope captured the moment of impact and observed the cloud of debris ejected from the asteroid at impact. Presumably, some of that debris came from the asteroid and some of it was vaporized spacecraft.

DRACO, a high-resolution imaging system based on the LORRI camera, was used on the New Horizons spacecraft that flew past and photographed Pluto, which had been demoted from planet to dwarf planet status in 2006. The DRACO optical system employs a narrow-angle telescope with a 208-millimeter aperture and 0.29-degree field of view. DRACO’s imager is a CMOS sensor, which has better sensitivity, exhibits less image noise, and costs less than the CCD sensor used for the New Horizons LORRI camera. DART’s DRACO imaging system uses a 5.5-Mpixel (2560×2160 pixels) CIS2521 sensor from BAE Systems. This sensor has two 11-bit ADC channels per column. One channel is optimized for low light levels and the other is optimized for high light levels. DRACO’s Focal Plane Electronics (FPE) block combines these two channels into one 16-bit video stream, which explains how DRACO captures high-dynamic range (HDR) images.

DRACO’s CMOS imager and FPE feed an onboard image-processing pipeline. The image-processing pipeline’s output allows the navigation system to determine the relative location of Dimorphos. However, the DRACO imaging system has better resolution than needed for simple navigation. In its final moments, DRACO sent back detailed images that scientists will use to help analyze the detailed composition of Didymos and to characterize the impact site.

The DART image-processing pipeline, instantiated in a radiation-tolerant Microchip RTG4 FPGA, accepts the combined image stream from the FPE and refines the raw image. The pipeline resides on the same board as the FPE and relays the processed image stream to a single-board computer incorporating a radiation- and fault-tolerant CAES UT700 LEON3 processor, which is based on the Sparc v8 ISA. CAES LEON microprocessors and Microchip RTG4 FPGAs have flown on several space missions, and NASA always likes to fly hardware that’s already flown in space to reduce overall mission risk.

When the DART spacecraft slammed into Dimorphos, it was about six million miles away. Bit rates are lower in space – there are no broadband Interconnections, yet – so DRACO performs a large amount of image compression to reduce the bandwidth needed to send images back to the Earth. DRACO’s image-processing pipeline employs several algorithms to reduce the size of the video stream including 2×2 pixel binning, reduction of 16-bit image data to 12 bits, lossless image compression, and image windowing. In addition, DRACO’s image-processing pipeline removes the background and bad pixels from the image. There’s no real need to consume precious bandwidth to transmit this extraneous information, at least not for the DART mission. The asteroid itself is DART’s central focus. All image-processing steps occur in the image-processing pipeline instantiated in the Microchip RTG4 FPGA.

Although Microchip now provides the radiation-tolerant RTG4 FPGA as part of its product line, the device’s roots go all the way back to the Actel rad-hard antifuse FPGAs developed during the last century. Microsemi bought Actel for $430 million in 2010 and then Microchip bought Microsemi for $10.3 billion in 2018, which is how Microchip wound up with rad-hard and radiation-tolerant FPGAs.

Of course, the DART mission and the Microchip RTG4 FPGA did not save the Earth from Didymos because there was no real threat, this time. This mission was a test to see if it’s possible to use the kinetic energy of a speeding spacecraft to deflect an asteroid from its predicted path. If a small deflection takes place early enough, then the predicted path alteration can cause the asteroid to miss the Earth when it might otherwise have impacted the planet’s surface.

Did DART’s technology prove effective? On October 11, NASA confirmed that the spacecraft’s impact altered Dimorphos’ orbit around Didymos by 32 minutes, shortening the 11 hour and 55-minute orbit to 11 hours and 23 minutes. Before the DART mission’s impact on Dimorphos, NASA’s mission goals defined a minimum successful period change of Dimorphos orbit as a change of at least 73 seconds, so it appears that DART may have surpassed this minimum benchmark by more than 25x.

Scientists believe the 1908 Tunguska event that occurred in Siberia was the result of a rocky asteroid smaller than Dimorphos that entered the Earth’s atmosphere and exploded in mid-air, flattening 80 million trees with an explosive force equal to a 12-megaton bomb. That part of Siberia was sparsely populated so perhaps only three people were killed, despite the size of the event.

Scientists also believe that a large asteroid struck Earth off Mexico’s Yucatán Peninsula, created the Chicxulub crater – which is about 110 miles or 80 kilometers in diameter, and probably caused a decades-long “impact winter” that killed off the dinosaurs about 66 million years ago in something called the Cretaceous–Paleogene extinction event.

NASA’s DART mission cost about a third of a billion dollars with $308 million spent on spacecraft development and $68.8 million for launch services. That’s certainly not cheap, but what is the right price for developing ways to avoid extinction?